There are video games of just about every genre that a person could imagine. From massive battle royale-style games to role-playing games or adventure games and even life simulation games.

Life simulation games can take many forms but one really popular version is the farming game. Whether it’s a game entirely focused on running a farm or it has a little more to it, they can be a ton of fun! There are so many of them that it can be hard to pick the best one. Keep reading to see the top farming games, ranked from the worst to the best.

Updated November 27th, 2020 by Morgan Austin: While 2020 might’ve been a year filled with lots of low points, it still turned out to be a decent year for fans of farming games. Quite a few farming games have released this year, and many of them have already amassed large groups of fans and critical acclaim. If you’re a fan of farming games, here are some more titles that you don’t want to miss.

Hay Day is a farming game that definitely falls on the more simple end of the farming game spectrum. This game is a lot of fun for people that loved to play Farmville back in the day. This game has the bonus of being a mobile game, meaning that it can be fun to play on the go, but tends to lack some of the features that other farming games have.

But for someone looking for a mobile game where they can farm and fish, this game is a solid choice. 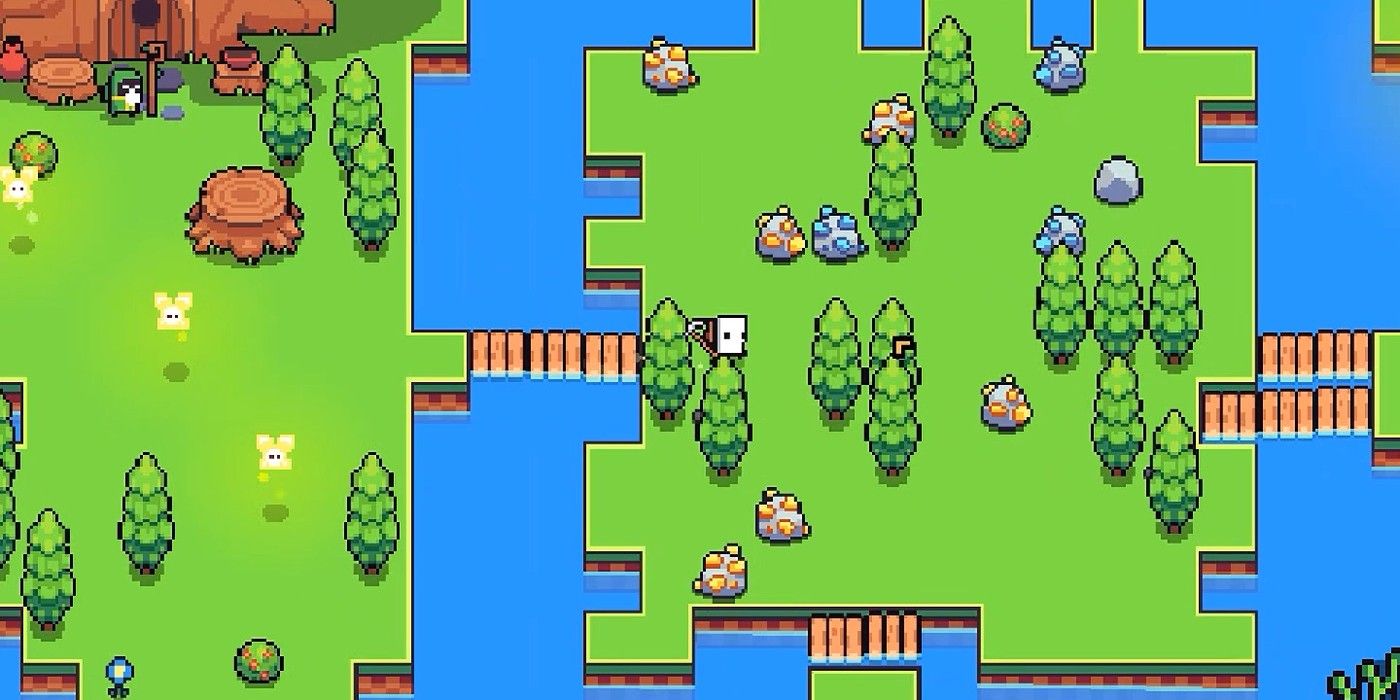 In Forager, players start from square one on their own little bit of land, and they have to gather materials to hopefully expand and discover new resources and locations. The art style is simplistic and cute, and the game mechanics are pretty easy to get the hang of.

Like some other games on this list, there’s also quite a bit of battling involved in this game rather than just farming alone. This is one of the many reasons why farming in Forager is important though, as players will need all the help they can get from their crops as they make new gear and fight different enemies.

13 Story of Seasons: Trio of Towns 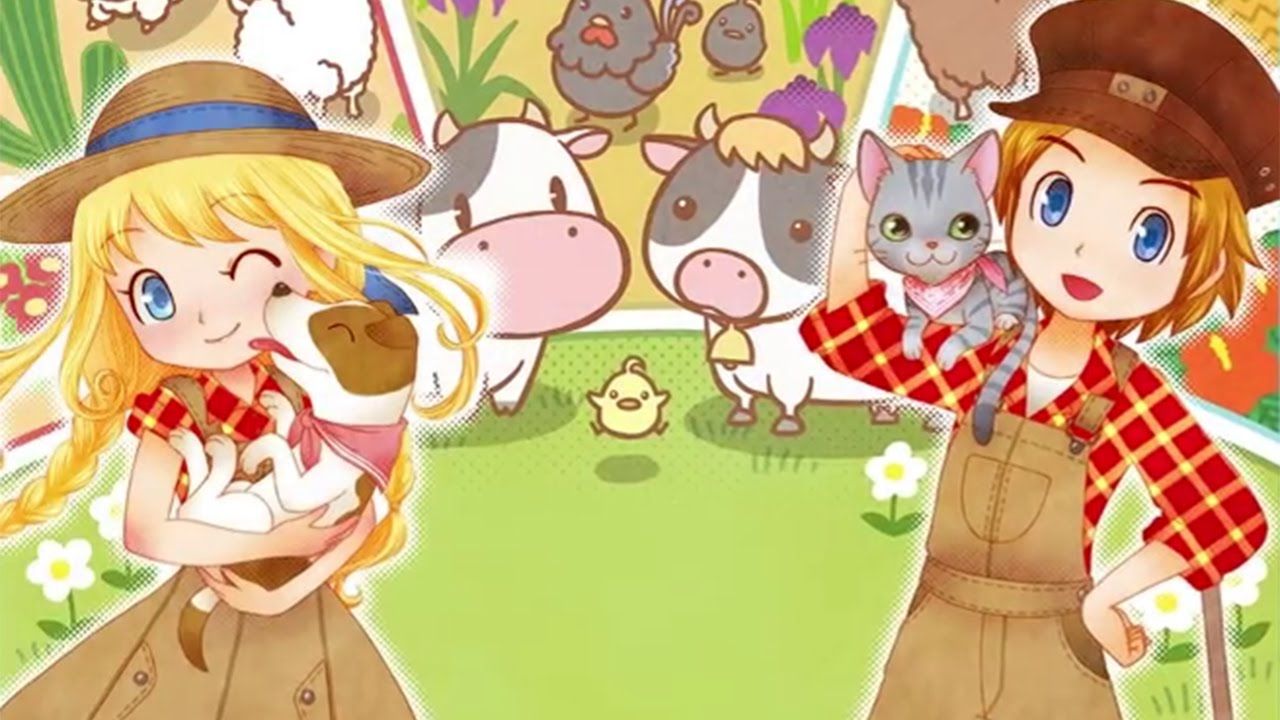 In the game, the player controls the main character and in most games, has just taken over a run-down farm that is no longer being taken care of. It’s their job to build it back up to its former glory, get married, and start a family while taking care of their crops and animals. 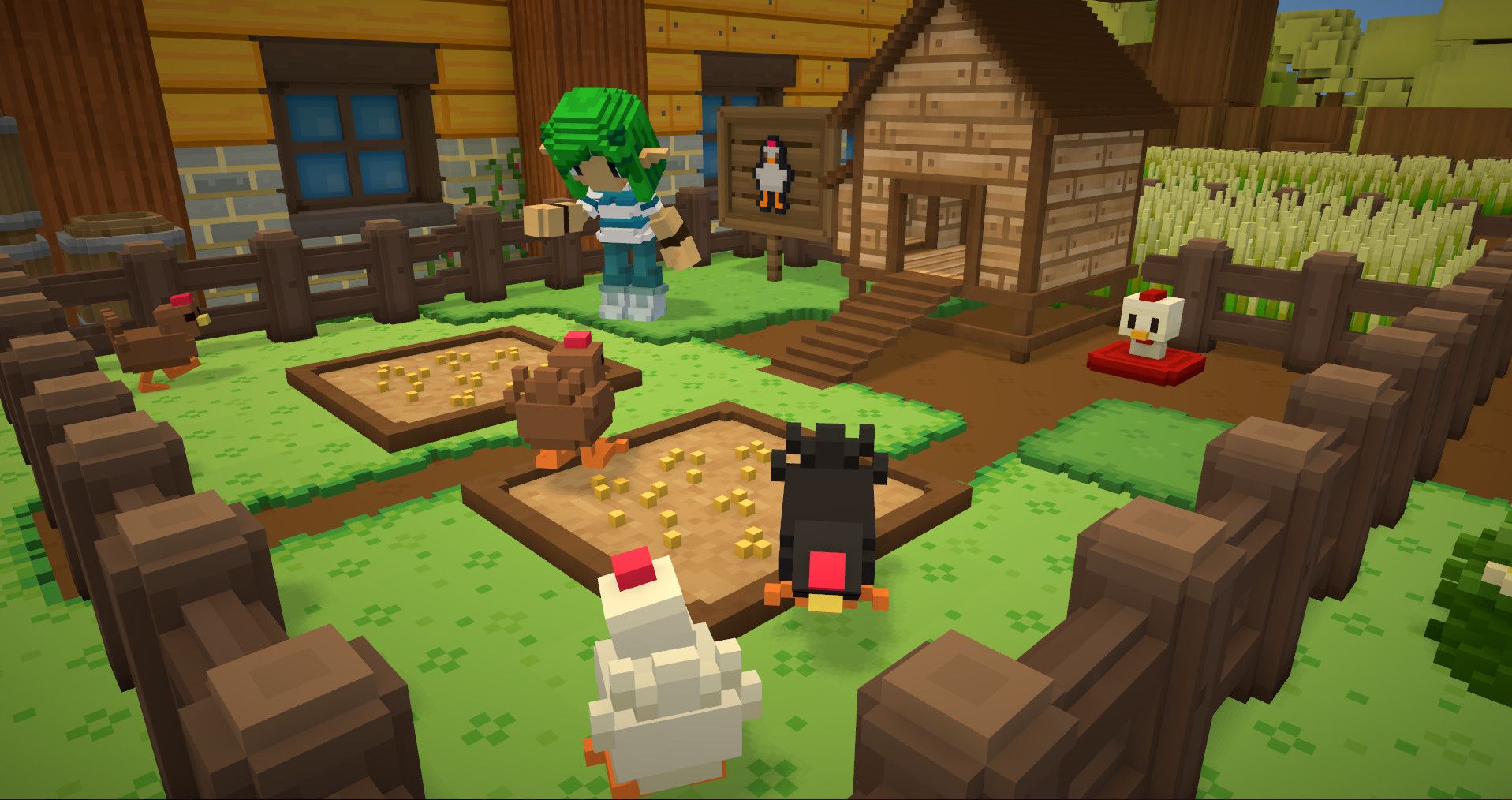 Minecraft is a building game that was designed to look like an old school 8-bit game. This game got a lot of people hooked because of its open-world format and the huge variety of things to do in the game.

Staxel is a PC game that may look like it’s simply a Minecraft mod to enhance the way farming works, but it’s actually a separate game entirely! In Staxel, players get to build and maintain a farm while getting to know the people around them and doing quests in order to help them and maintain a friendship with them. 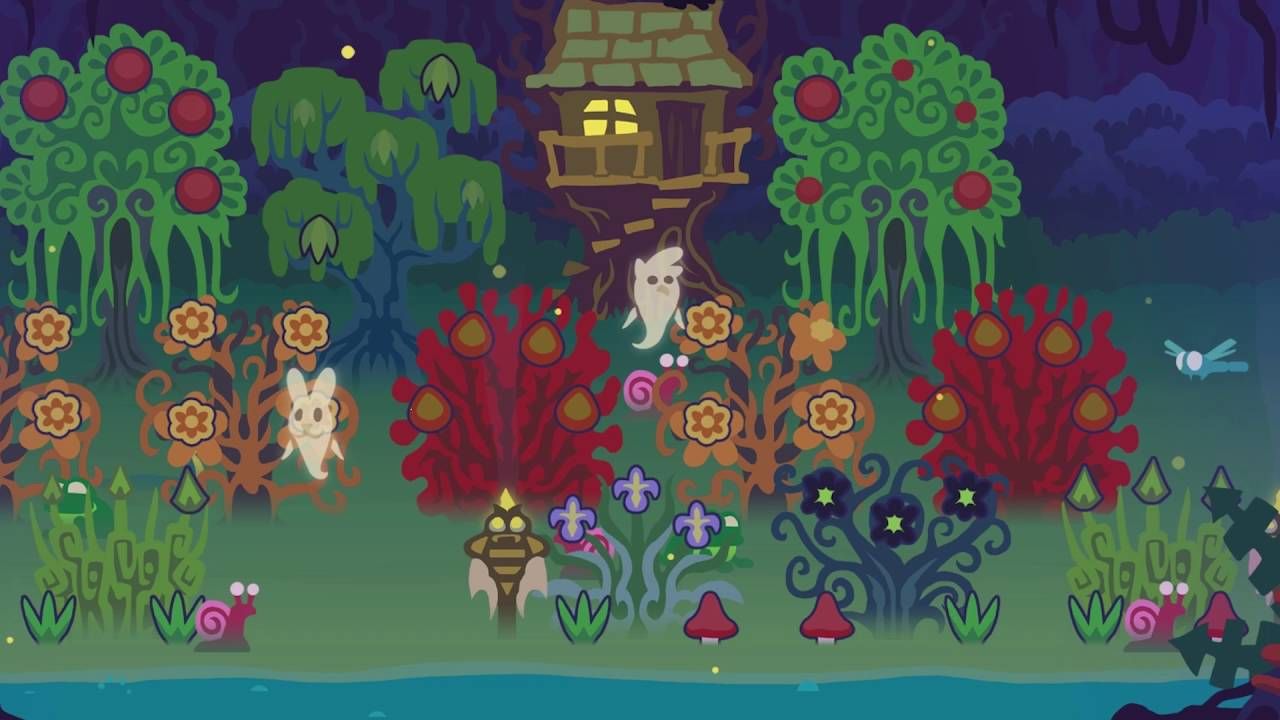 Voodoo Garden is a really unique farming game. It’s a PC game that was released in 2016 and costs $2.99 on Steam – or less if you find it on sale. This farming game is a pretty unique one because you don’t simply live on a farm, you’re on a farm in a swamp with all kinds of unique helpers and power-ups.

As the swamp’s plants grow, spirits come to help you and you’re able to purchase all kinds of new totems, plants, and animals as you upgrade your farm and craft potions. Voodoo Garden is a casual, clicker-style game but the unique setting and concept keep it fun. 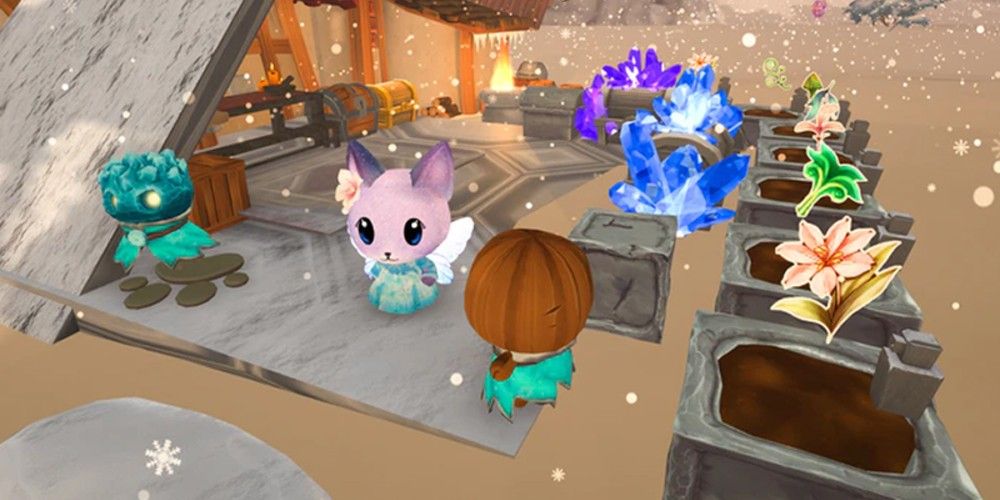 Garden Paws follows the somewhat common farming storyline where your grandparents leave you a farm that they’ve owned and started up already. However, this game takes a unique spin on its story as you get to play as an adorable animal character, and the other people in town are animals too.

Not only can players farm, craft, and discover lots of new places like many other farming games, but there are plenty of other features that make it feel even more immersive. You’re tasked with making your own house and making sure that new structures are set up in town, and you also can run your own shop. Plus, there’s also a multiplayer feature so you can share this experience with your friends. 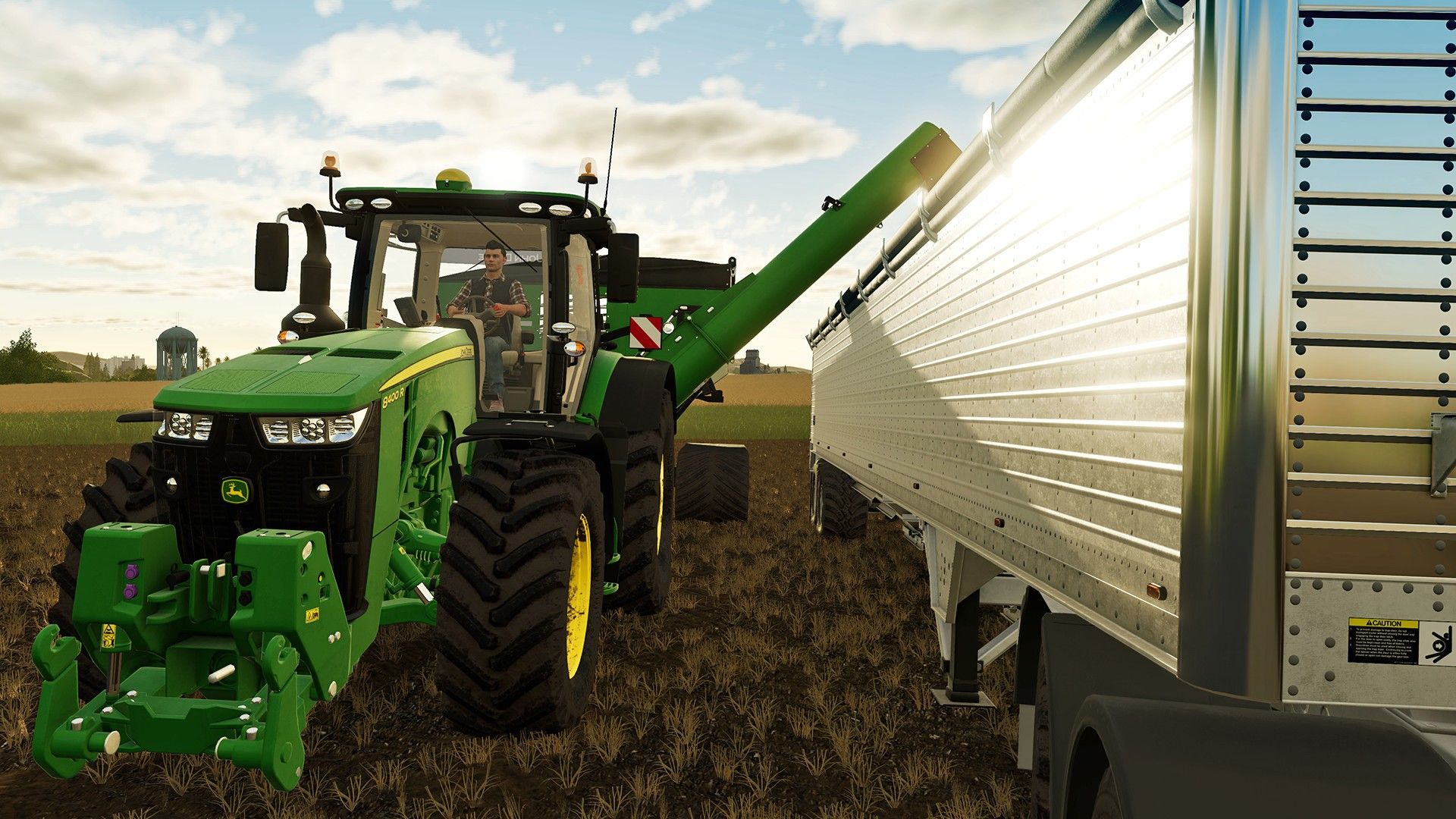 Farming Simulator is a series of games that are, as the name suggests, totally based on farming. These games have been released almost yearly since Farming Simulator 2008 was released and come on both PC and console as well as mobile versions of the games.

These games follow as the player runs a farm as they grow crops and animals and then sell the items that they’ve harvested from their farms. For people that want a serious farming experience, this series is perfect. 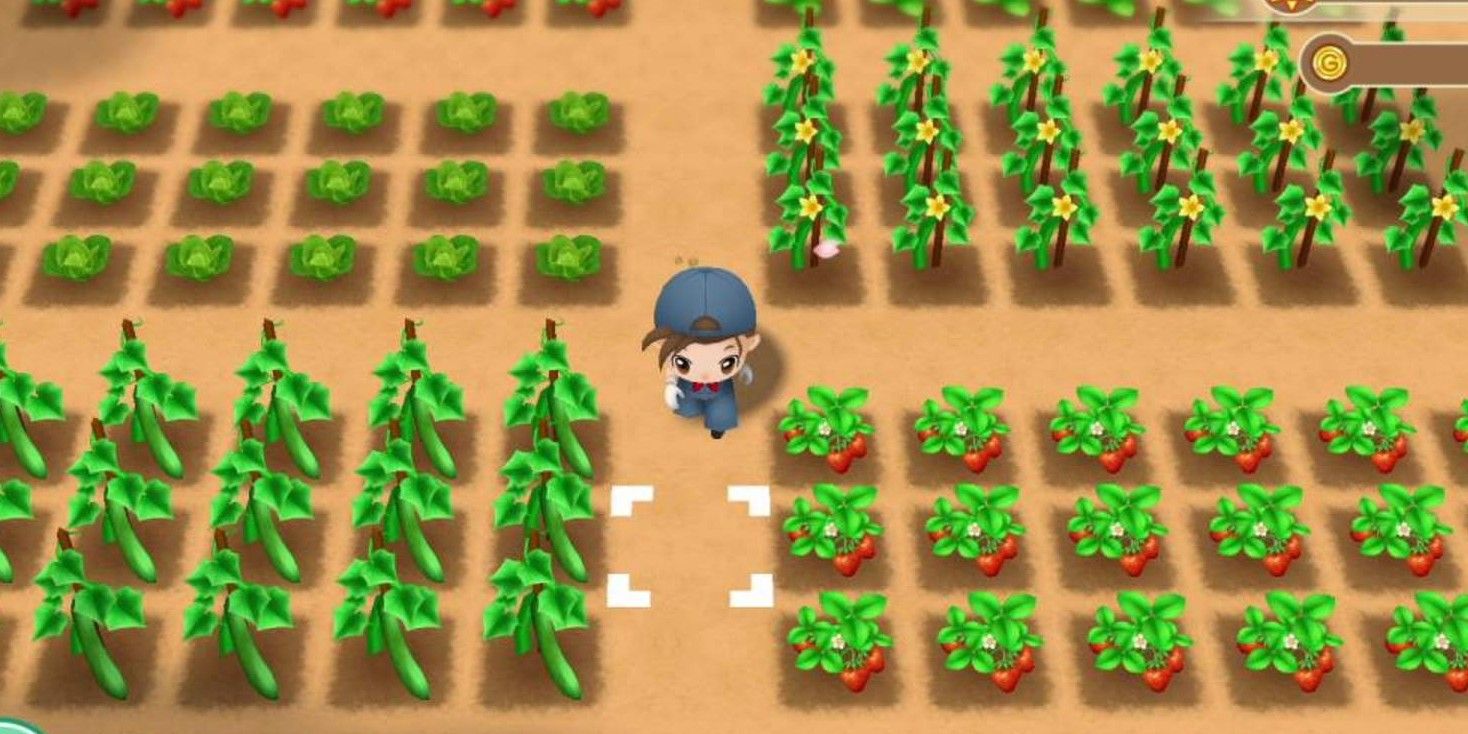 Story of Seasons: Friends of Mineral Town is a remake of the original game in the Harvest Moon series that came out in 2003. Since it’s a remake, many fans were excited to see how things might have changed or stayed the same in this new version.

The core of the game hasn’t changed much, as the goal is still to run your farm, make friends, discover new items and areas, and maybe start a family if you want to. While there weren’t a whole lot of changes, some fans were disappointed while others appreciated what was added or take out from the original game. If you’re a big fan of the Harvest Moon franchise and you want to make sure that any problems were fixed or your favorite parts are still included, it might be a good idea to check some reviews before buying the game.

7 My Time at Portia 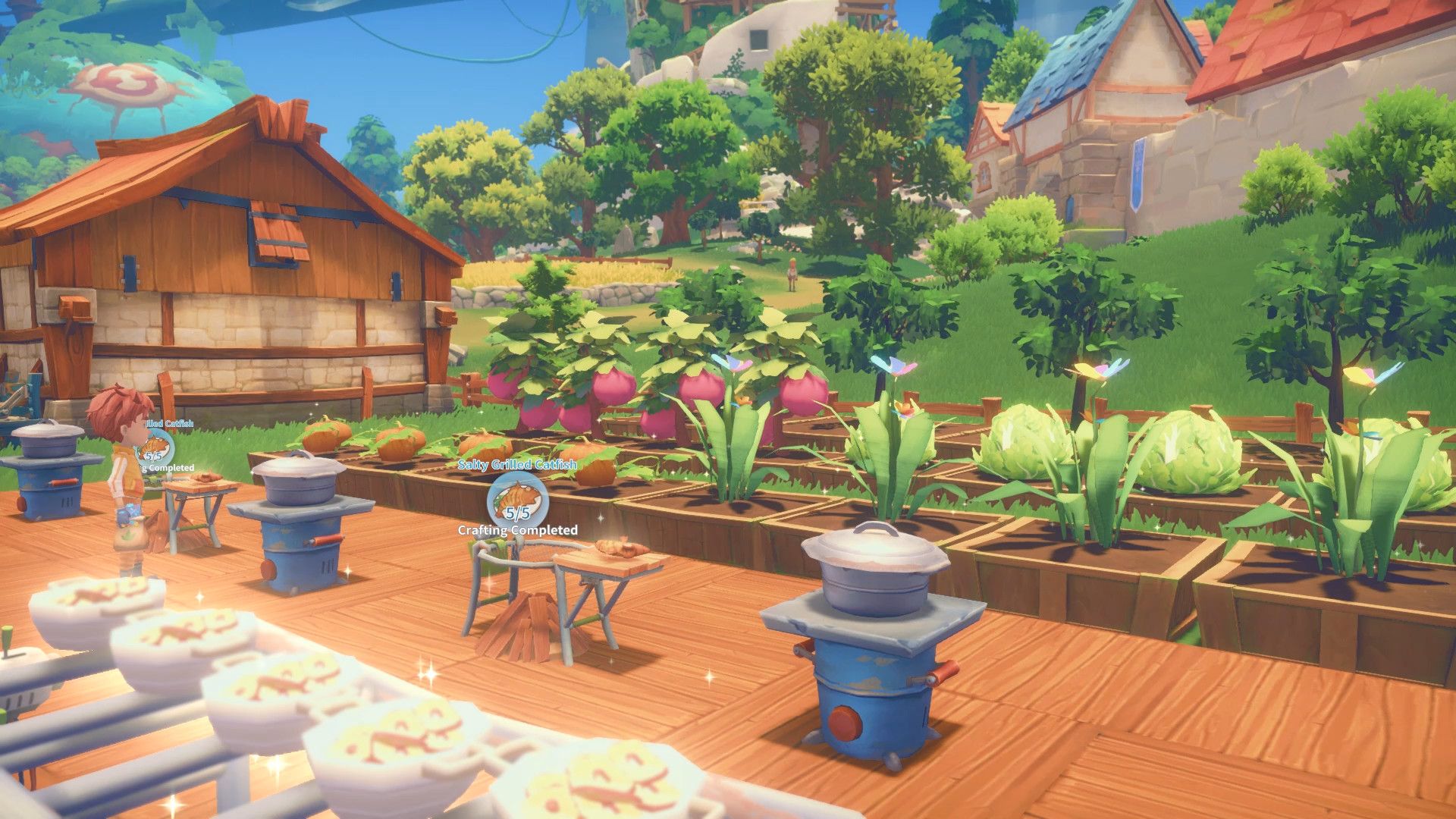 My Time at Portia is a game that was released in 2019 and has become a pretty popular indie simulation game since it was released. In this game, the player inhabits Pa’s old workshop and is tasked with restoring it back to its former glory by growing crops, helping the people in town, and raising animals.

Along with farming, the game also allows the player to explore the mines, take part in festivals in the town of Portia, go fishing, and play fun mini-games within the game itself. 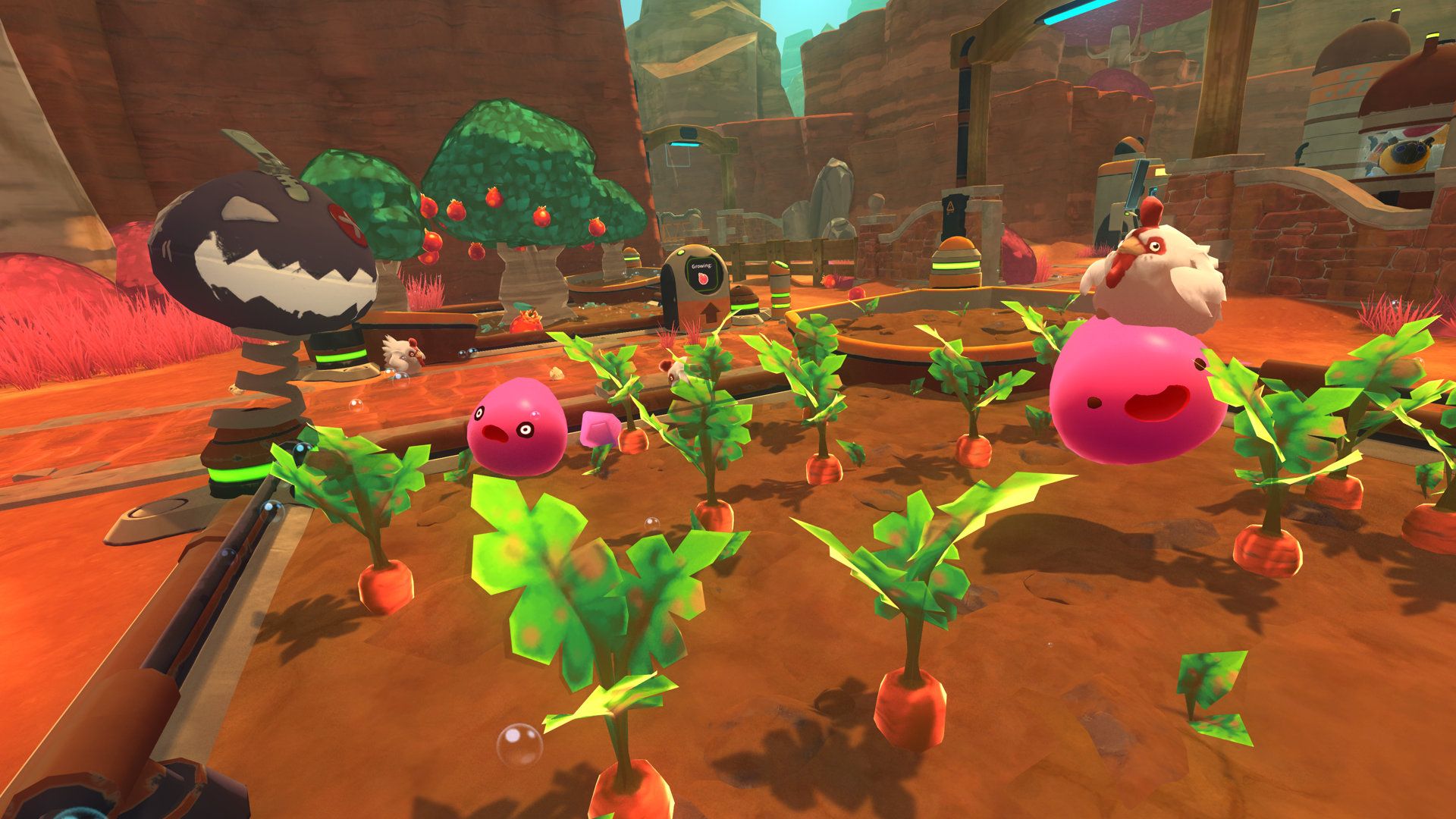 Slime Rancher is a really quirky, unique game that has been released on multiple platforms from PC to consoles. Slime Rancher is a game that is set on a faraway planet where the player controls Beatrix LaBeau, a rancher who just moved to this planet to start life on her new ranch.

In this game, players catch, breed, and care for different species of creatures known as Slimes while growing crops, expanding the ranch, and earning money by selling Plorts that they harvest from their Slimes.

5 Sakuna: Of Rice And Ruin 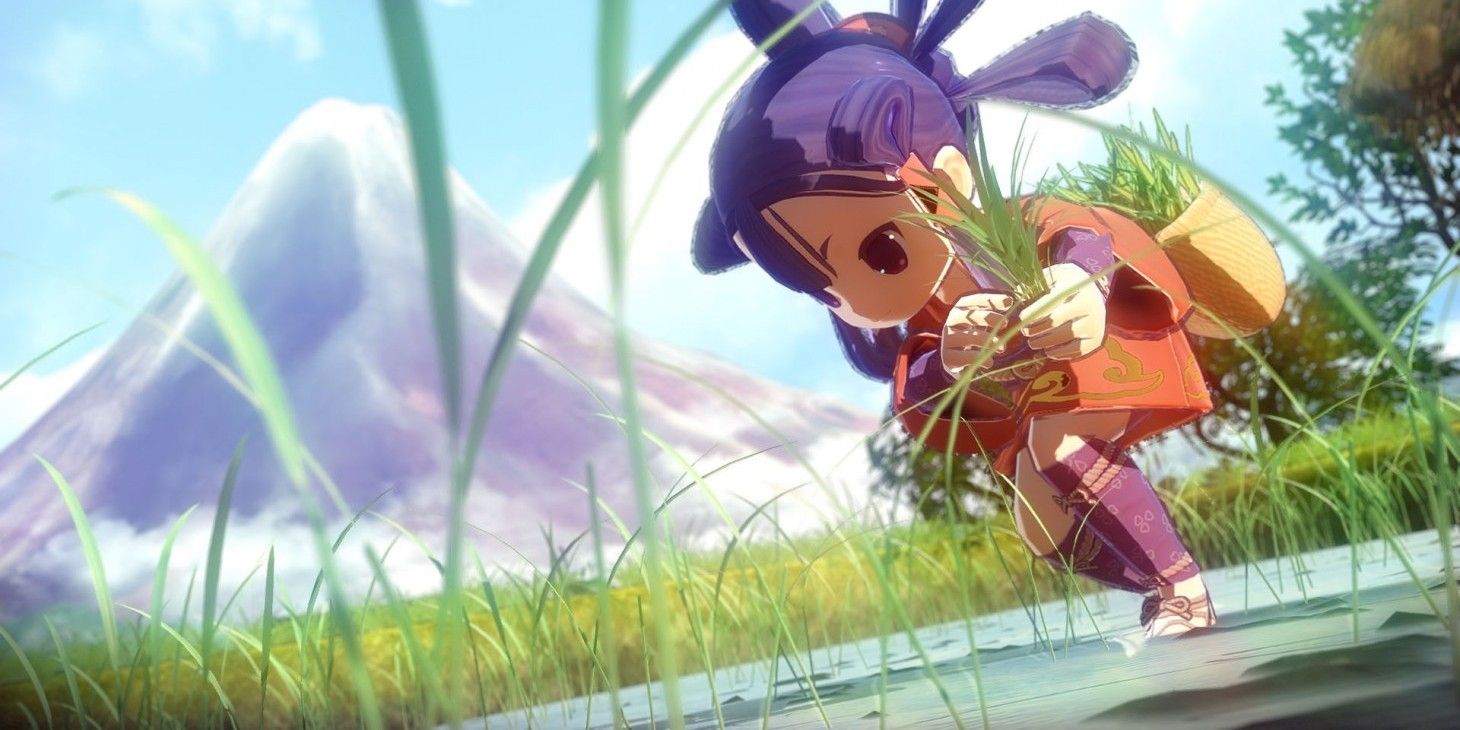 On the surface, Sakuna: Of Rice and Ruin might seem like it’s primarily a side-scroller fighting game. However, given that you play as a harvest goddess named Sakuna, it makes sense that farming would still be a big part of the story. That’s part of what makes this game so unique and exciting to play.

Farming in this game can seem a lot more complicated than other farming games that appear on this list. You have to pay close attention to things like how much you water the rice, what kinds of things you put in the fertilizer, and other more realistic aspects. The result is different kinds of rice growing on your farm, and each kind of rice actually changes the way that Sakuna fights after she eats it. 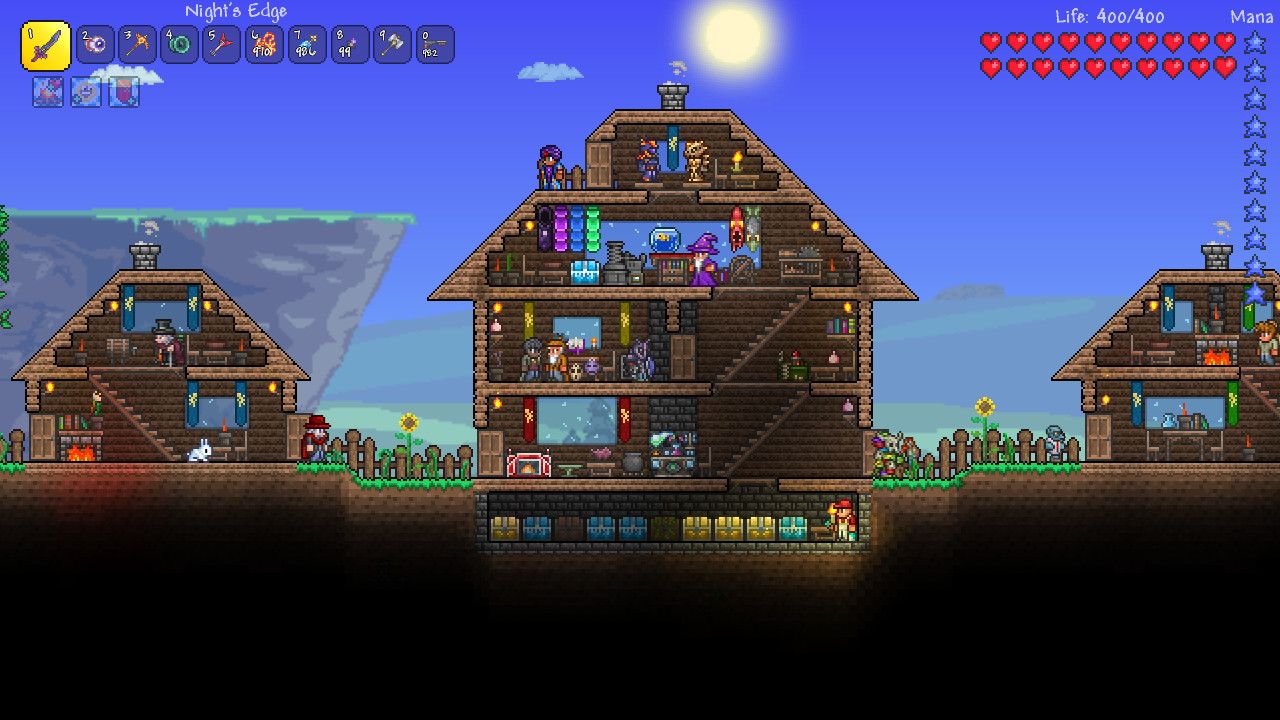 Terraria is a building game that was released in 2011 and originally came out as a PC game but has since been released on several other platforms including home consoles, handheld consoles, and a mobile game.

This game has a super open-world setting, allowing the player to do basically anything they want. Whether it’s staying at home to garden and grow a variety of crops or going out into the world to explore and gather materials, it’s all up to the player and their own creativity. 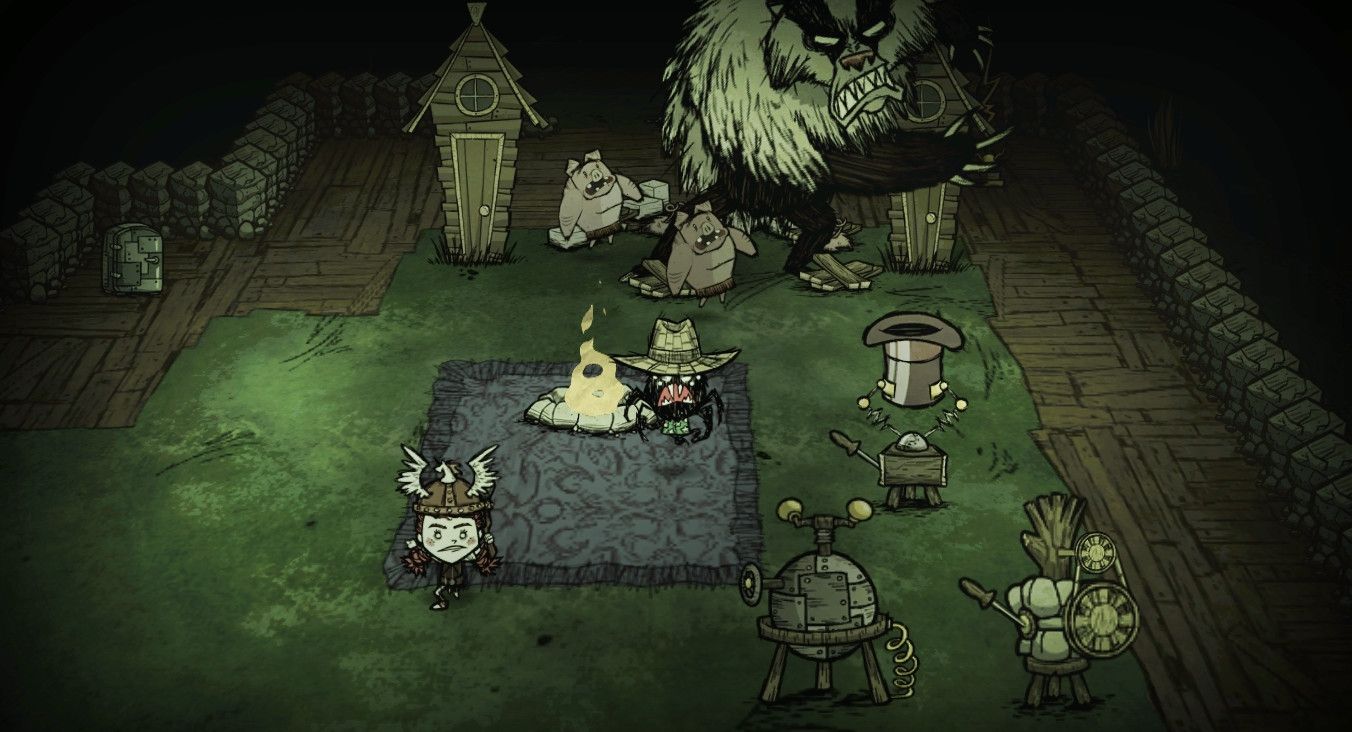 Don’t Starve Together is the multiplayer version of the game Don’t Starve. Although this can be played either with friends or with strangers in open servers, this game can also be played alone for players that are looking to do their own thing.

This game is one that has a very open-world, allowing the player to really take control of what happens and mold it to their play style. Anyone who has played this game will know that food is the key, so having at least a couple of farms near camp is crucial. 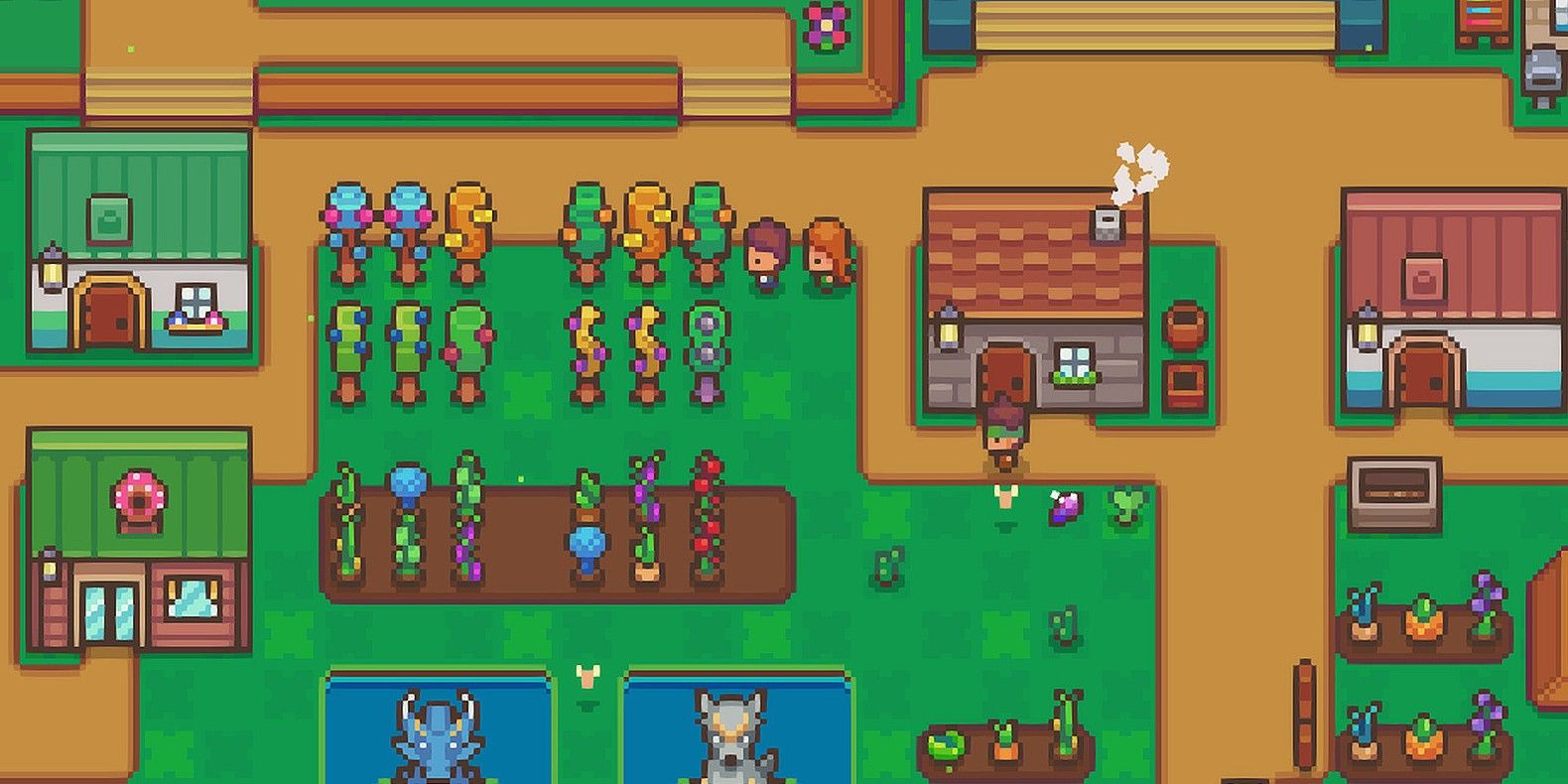 Littlewood is a relaxing, expansive, and colorful RPG made by Sean Young, who you may know as the artist for the Kindergarten game series. The premise of the game starts with a scenario that many players might not have thought about before: after an RPG hero saves the day, what happens to areas that were impacted by the villain’s attacks?

With this setup, players become that hero, but they now can help to rebuild the town of Solemn. So much of this game is open to the freedom to change the landscape and explore with ease. You’ll meet lovable characters who will ask for your help, and you get to farm, craft, and overall just have a great time improving life in Solemn. 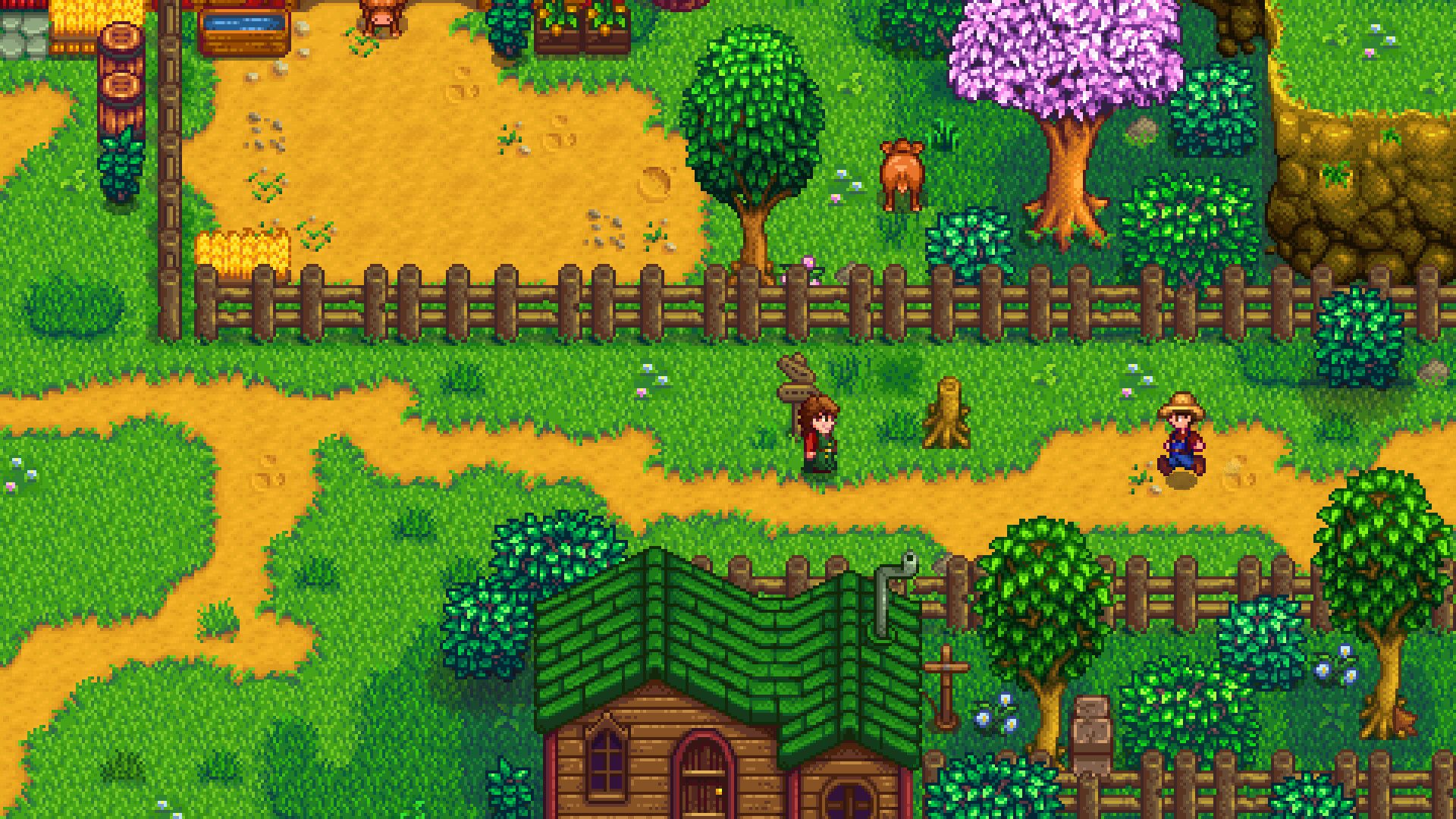 Stardew Valley is an indie game that has been released on multiple different platforms. This game is similar to some others like Harvest Moon in that it doesn’t just have a heavy emphasis on farming, it also puts a lot of focus on befriending and building relationships with people in the nearby town.

In this game, the player is tasked with taking over their late grandfather’s farm. There, they have crops and animals while helping to restore the nearby town through doing quests and completing various objectives.

NEXT: Stardew Valley: All The Marriage Options Ranked From Worst To Best 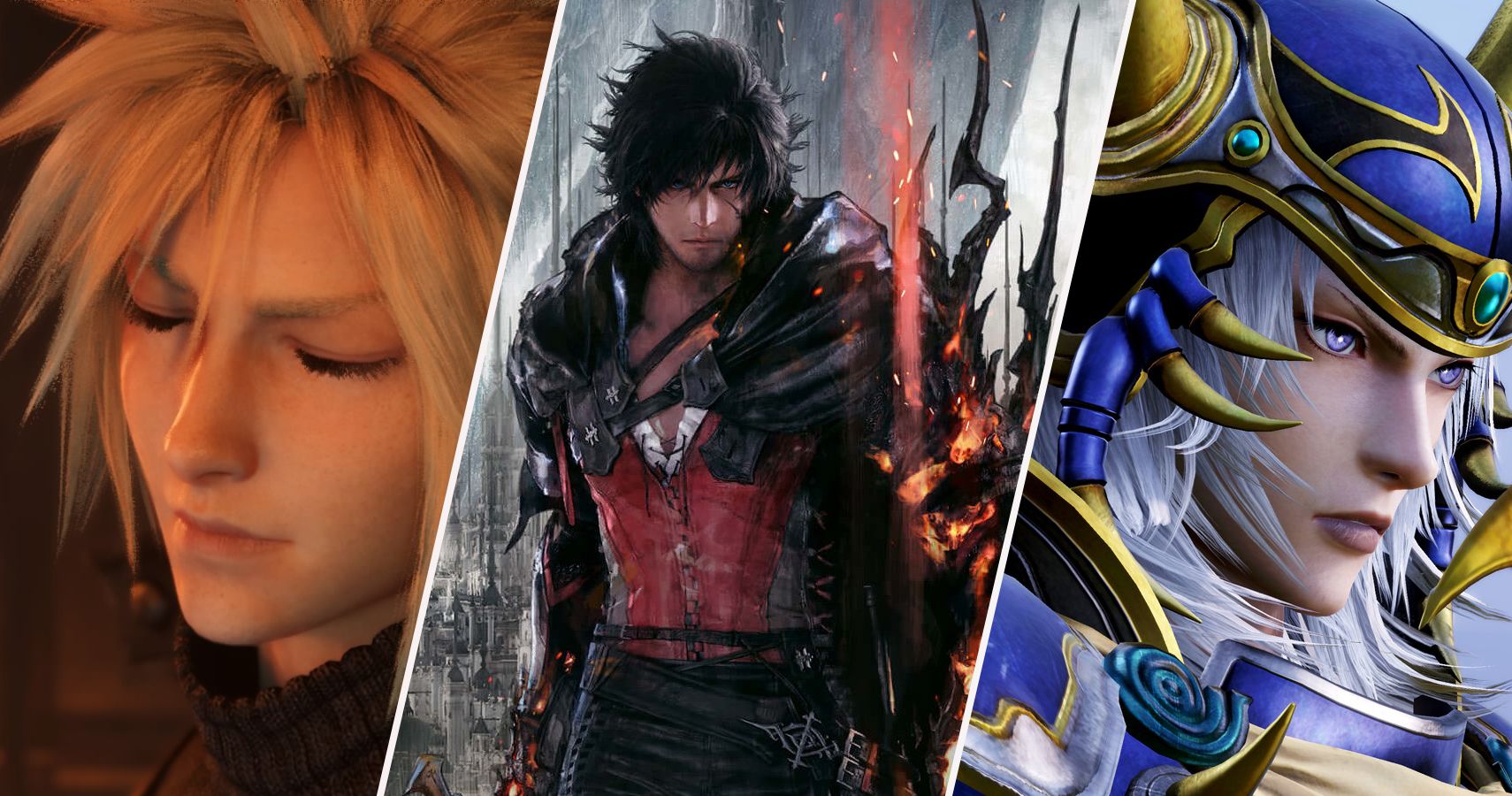