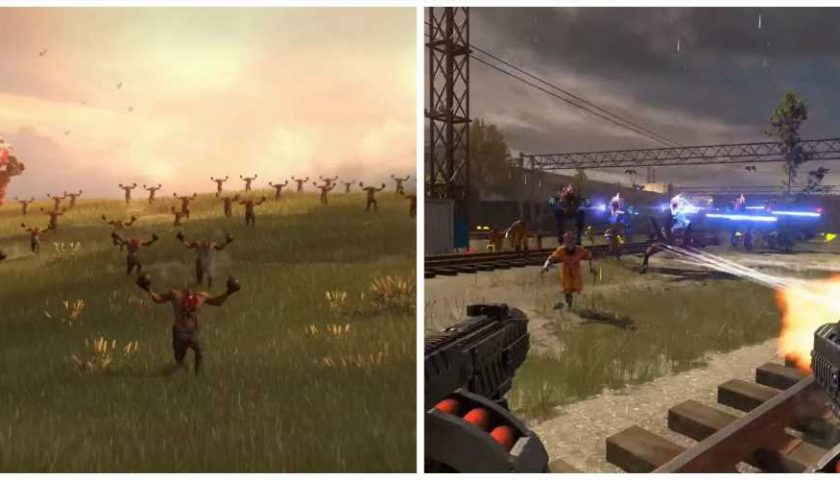 Serious Sam: Siberian Mayhem is the newest game in the old-school FPS series developed by Timelock Studio and Croteam. Timelock is comprised of members of the Serious Sam modding community, making it another success story of modders making it to the big time. The title is similar to Uncharted: The Lost Legacy in that it's essentially an expansion pack to Serious Sam 4, but can be purchased and played on its own.

First released in January 2022 for PC, the game shadow dropped on next-gen consoles that October. Siberian Mayhem is the most quality Sam content in a long time. However, before you jump in, there are some aspects that should be addressed whether you're a Serious Sam newcomer or veteran. 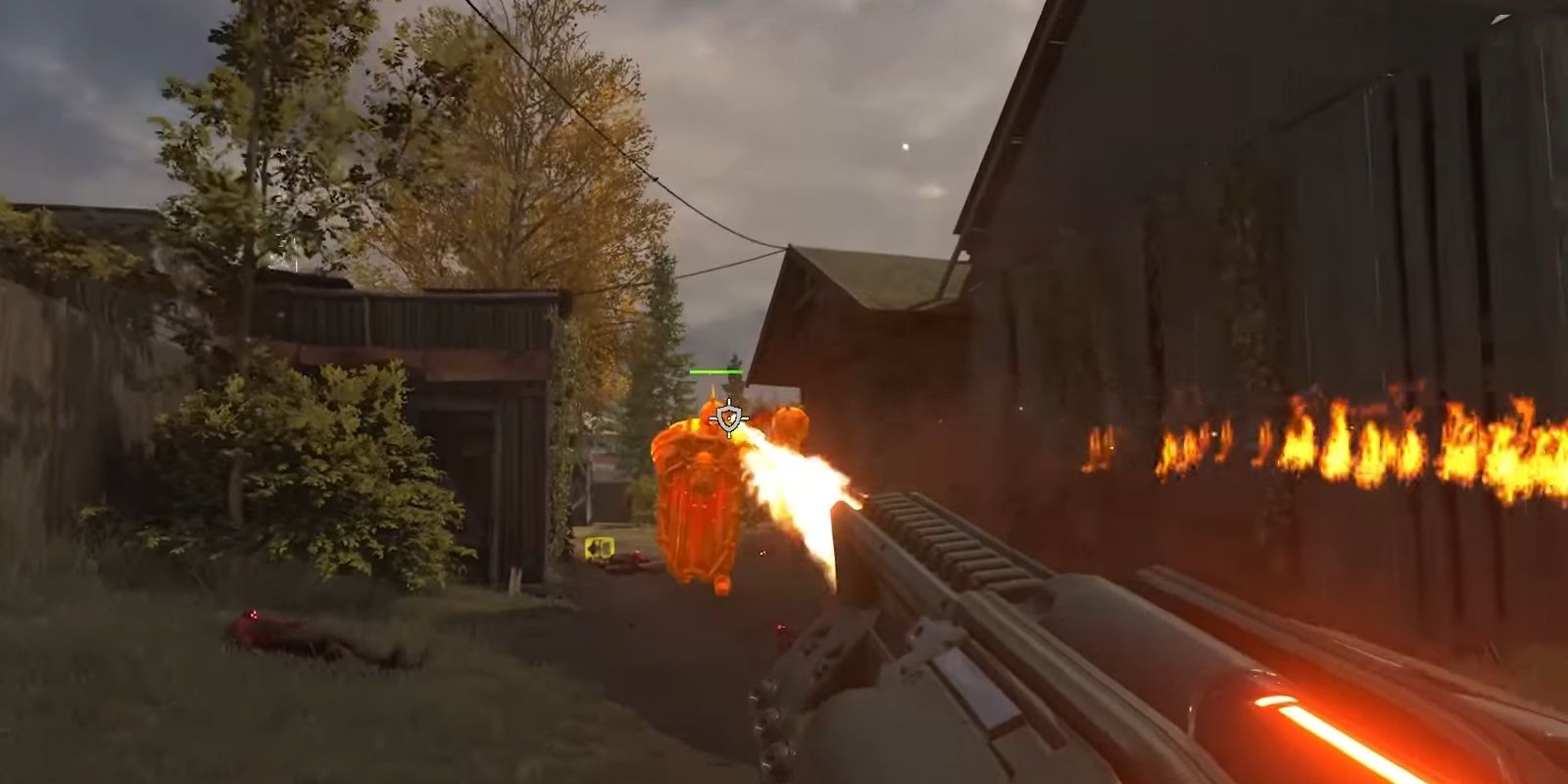 The last three chapters are quite long, though, with each taking over an hour to finish. Despite the short length, Siberian Mayhem has six new survival maps, and along with a price point of $20, compared to Sam 4's $40, you will get your money's worth. Just don't expect a beefy core campaign. 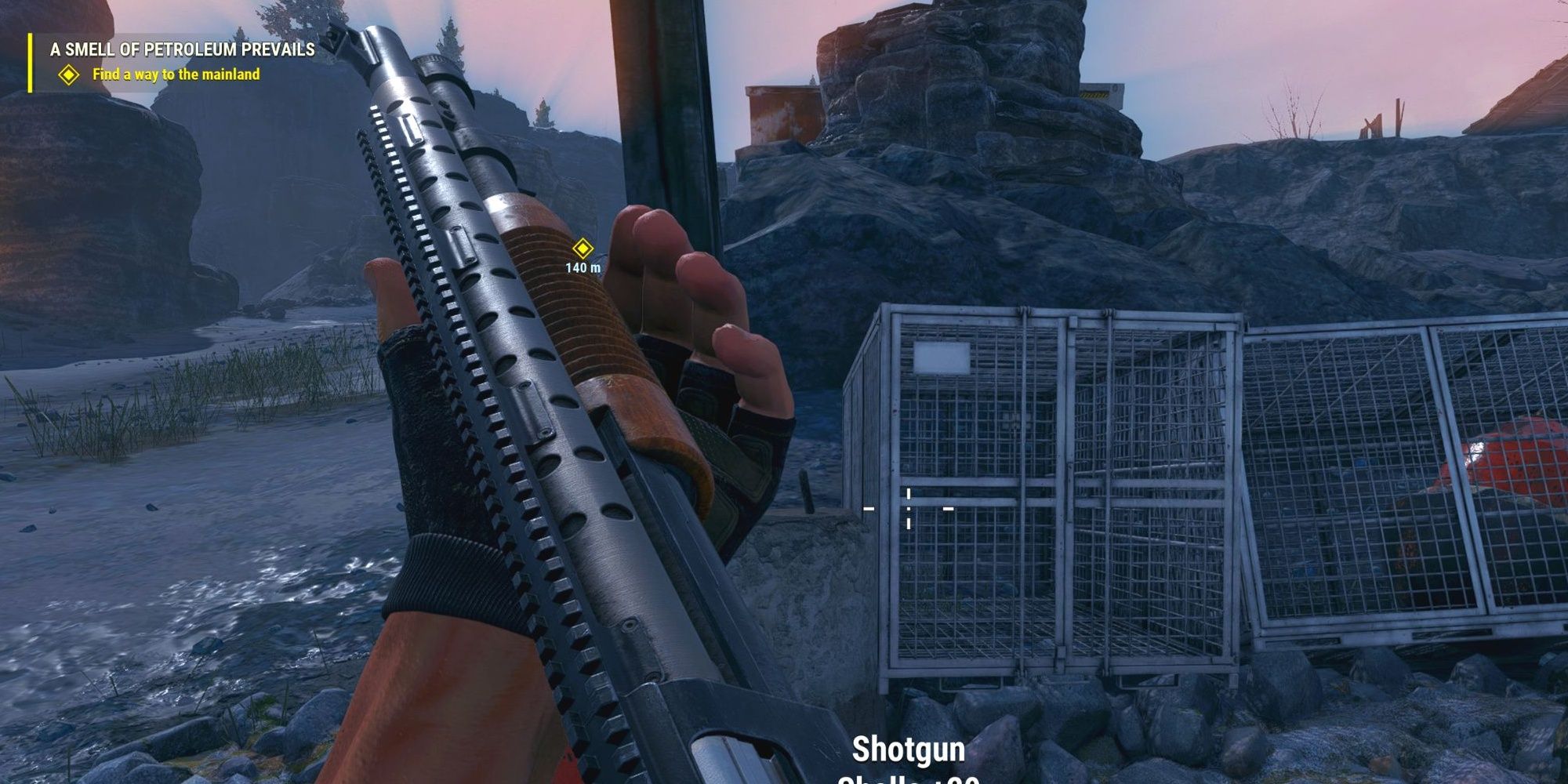 Traditionally in Serious Sam, the flow of obtaining new weapons is a bit slow. You have enough tools to handle the enemies, but you don't have a great arsenal until much later in the game. Siberian Mayhem changes that, however. 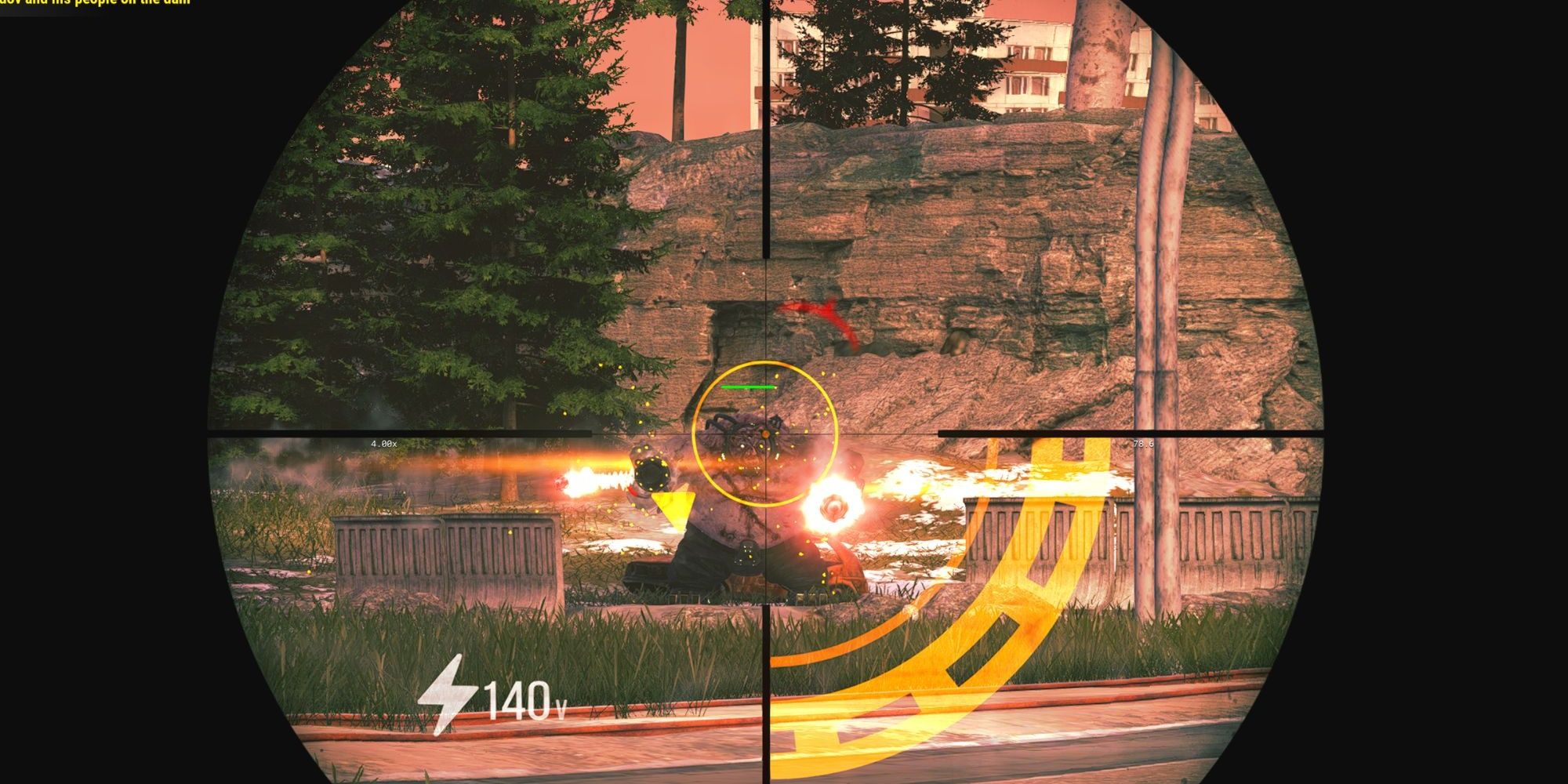 Many new weapons have been added to this game that weren't in Sam 4, but the Crossbow is the most useful. It might seem like a generic replacement for the Sniper Rifle, but that's not the case. The Crossbow is easier to handle, doesn't need to reload, and it's great to dual-wield — unlike the Sniper Rifle.

Sam 4 introduced headshots to the series, and even enemies like Adult Arachnoids will go down in one shot to the face from this weapon. If you're used to Sam 4's arsenal, don't forget to use this weapon, because it's a must in many fights. 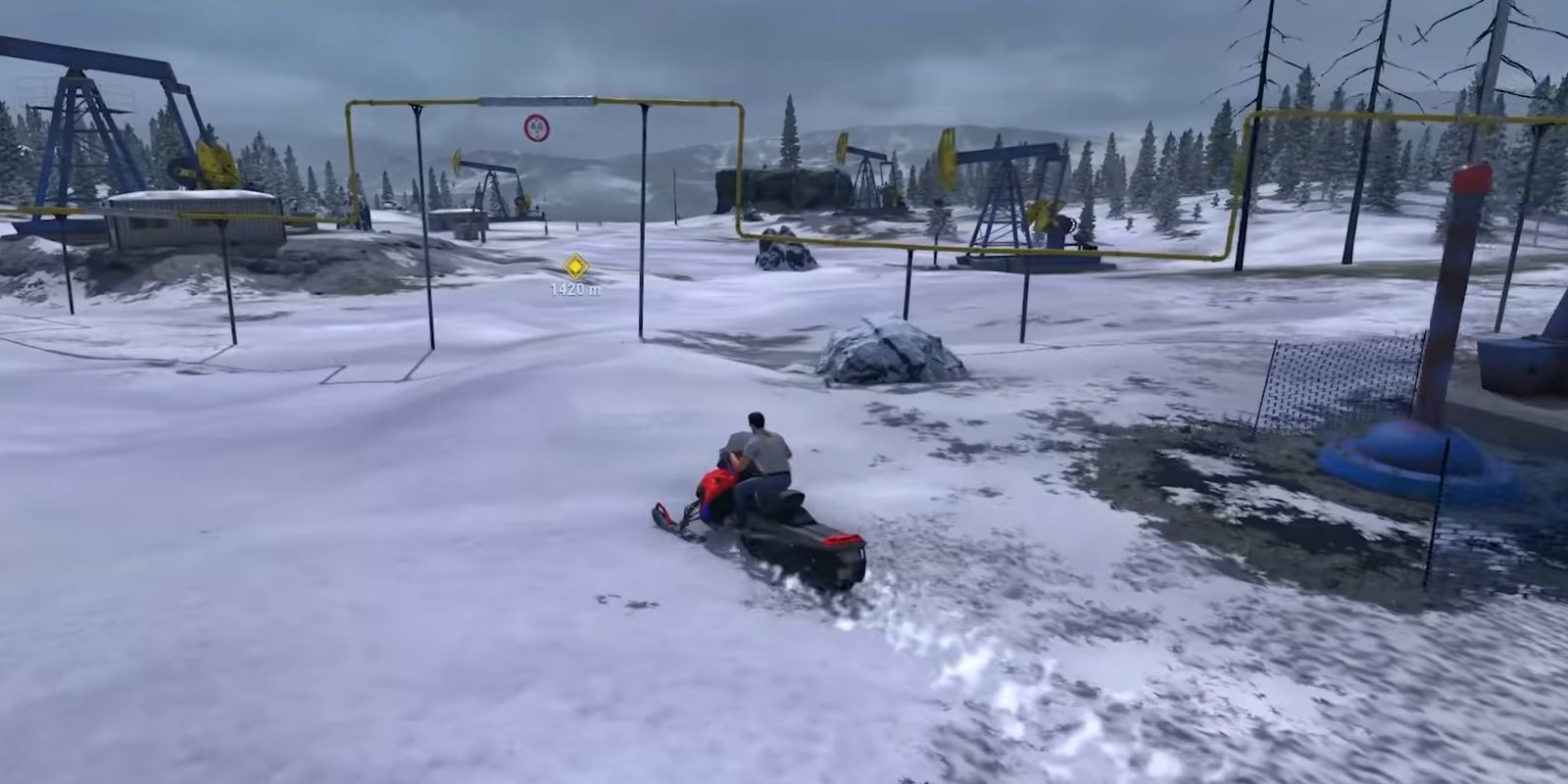 Just like Serious Sam 4, there are plenty of vehicles you can drive. The use of them is a little different, though. While the vehicles are still used primarily for travel, there are parts where you need to speed up a ramp to get to a certain area.

While using these vehicles, you can encounter a bug where you'll get stuck. It happens more often than in Sam 4. If this occurs, simply exit the vehicle and then reenter it. You should now be able to drive it again. 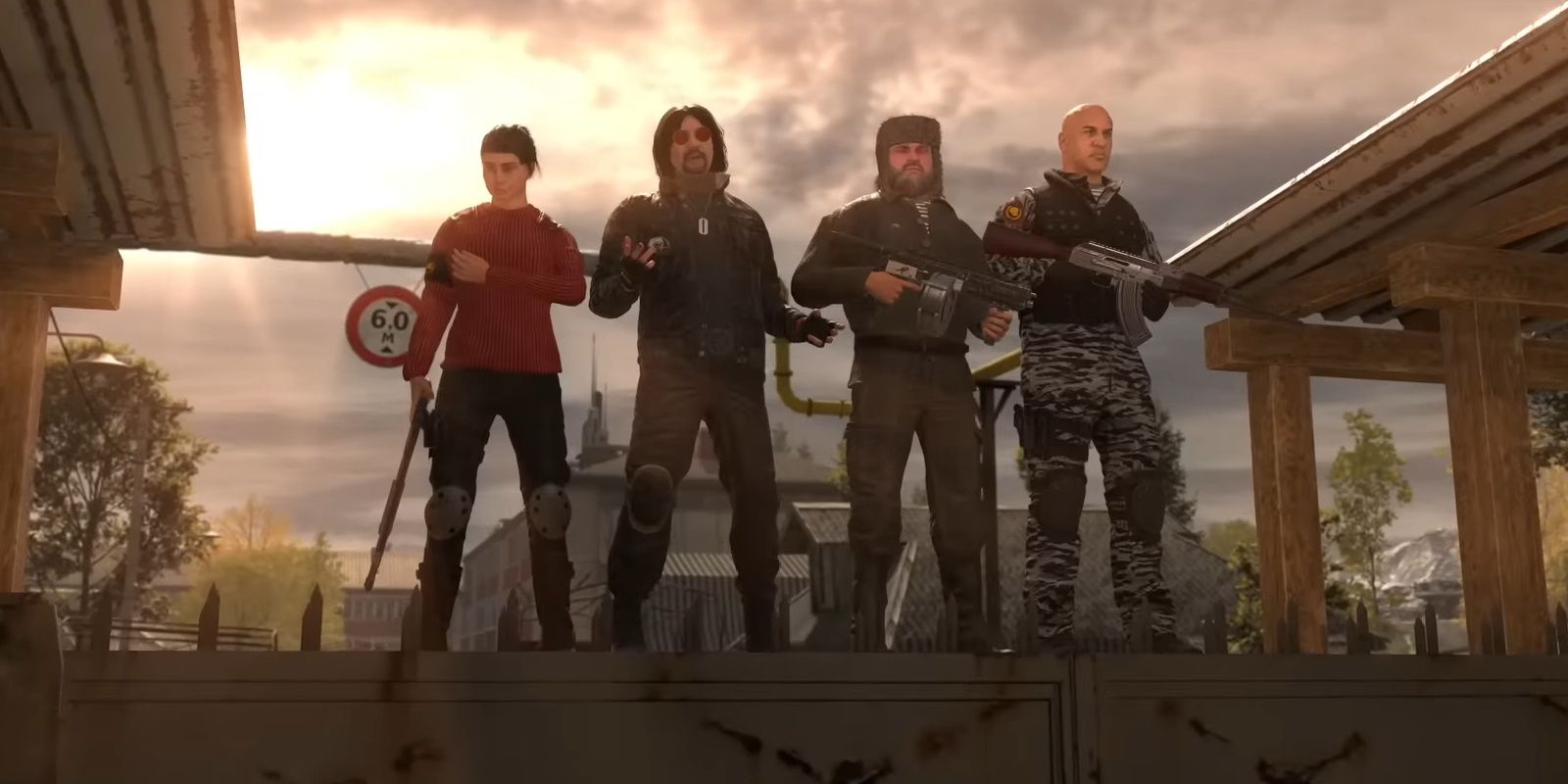 Serious Sam 4 had a much bigger focus on the story than previous entries in the series. That was met with generally negative responses from reviewers and fans alike. Siberian Mayhem seems to have taken that feedback on board, as the story is much less of a focus this time around.

Most of the cutscenes are in the last third of the game, and some levels will just abruptly end. People who disliked the heavy focus on the story in Sam 4 should feel more at home with this title. 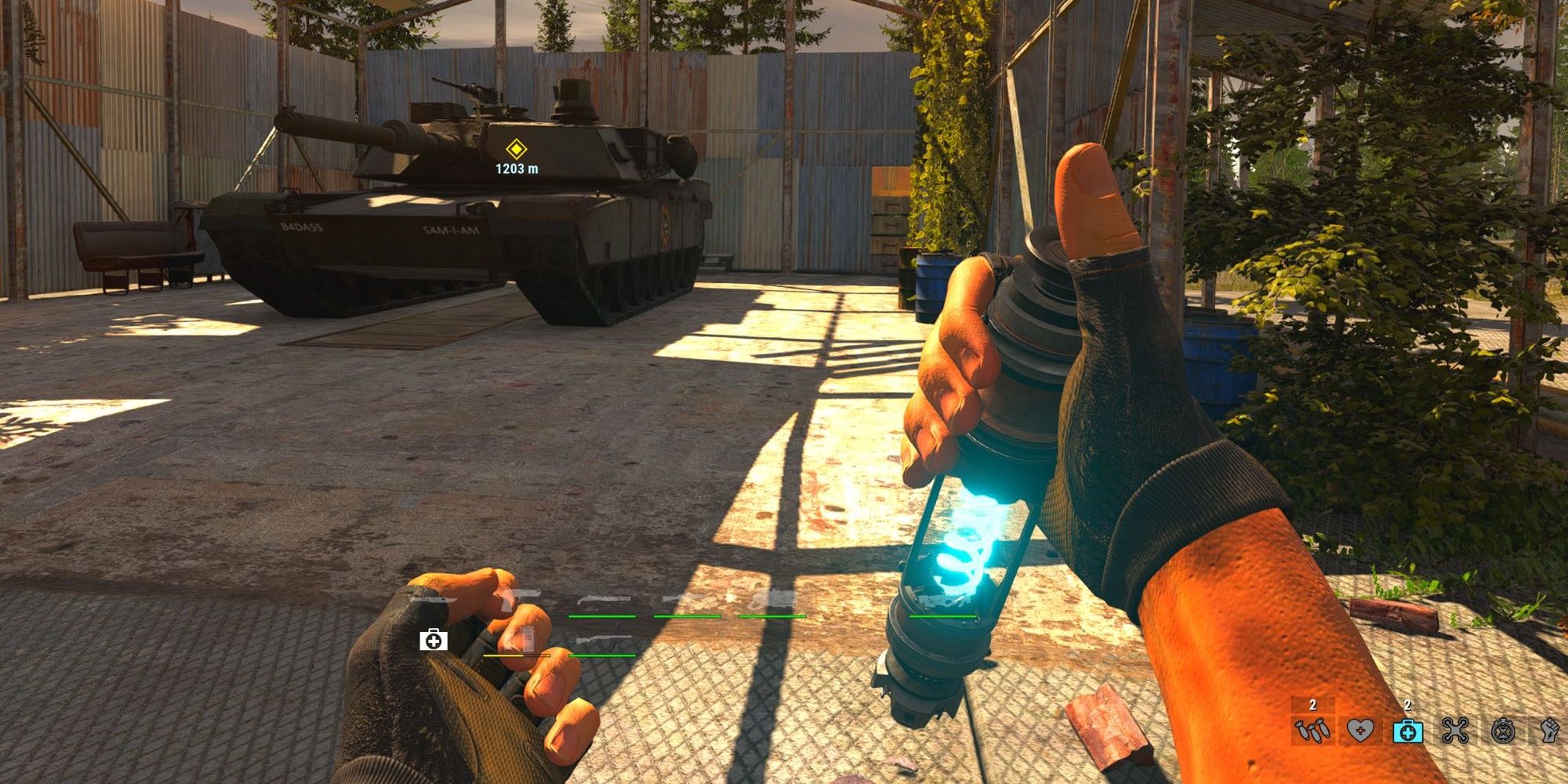 Siberian Mayhem's controller layout is mostly the same as Serious Sam 4, but with one notable exception. The buttons for using a gadget and using Netricsa are swapped.

This can be difficult to get used to initially, especially if you've just finished playing Serious Sam 4. You could mean to open Netricsa, but instead, use a gadget you didn't want to use. When starting, make sure you're not in the habit of using gadgets the old way. 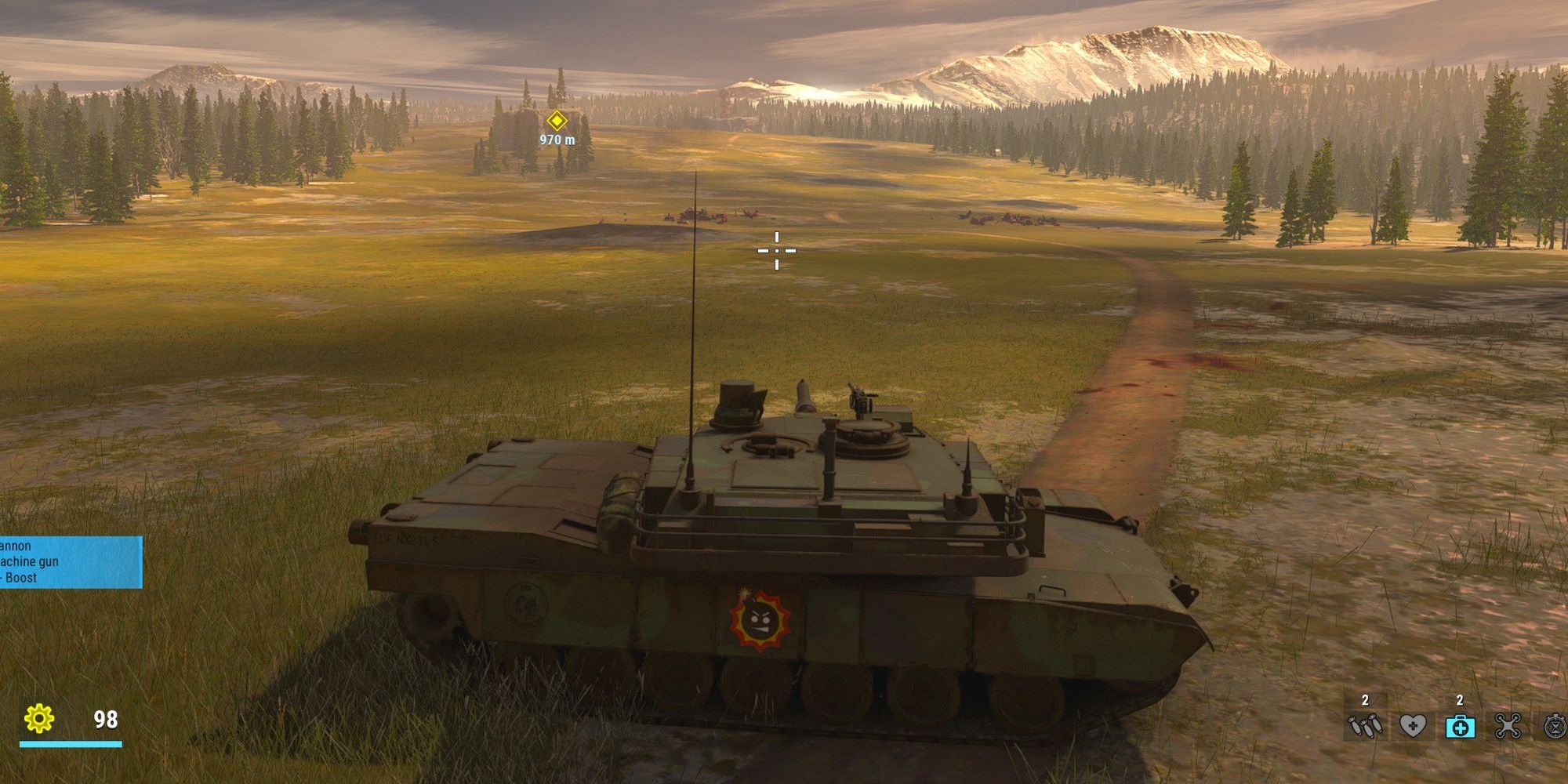 The most important and deadly vehicle in this game is the tank. There's an entire section with it in Chapter Four, and it's very hard to control, at least on a pad. It does control like an actual tank, but in a Serious Sam game, that's not good. Movement in the tank is restrictive and isn't fast enough. You can't even back up in the tank if you're shooting. You must stop shooting, back up, and then shoot.

The tank does have a boost, which helps, but you can only boost forward, which is entirely the opposite of what you want to do unless you're speedrunning. If you want to survive and kill all the enemies, just stay back and evade projectiles. Do not rush in, because the tank isn't durable. 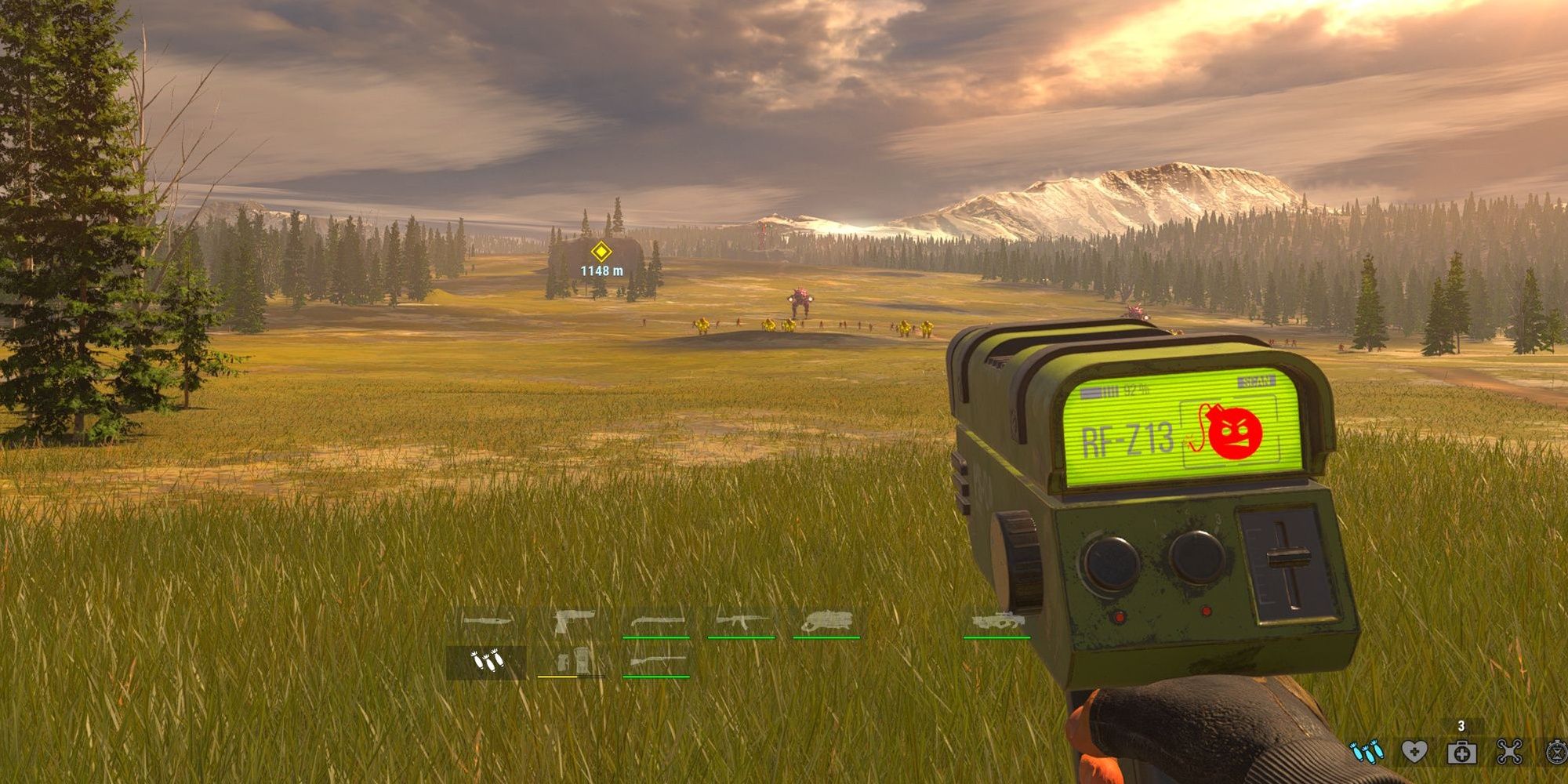 While Siberian Mayhem doesn't give you as many gadgets as Serious Sam 4, it still gives you plenty, and especially Lifes. These gadgets are powerful and are meant to be used. Sure, if you want to get better at the game, you can aim to use less of them — or even none — but on a first run, don't ignore them.

If you find yourself getting frustrated at a certain section, just use a few gadgets and make it a lot easier. Your score doesn't get reduced by their use, and if you choose not to use them, it's only because you want to elevate your skill level. 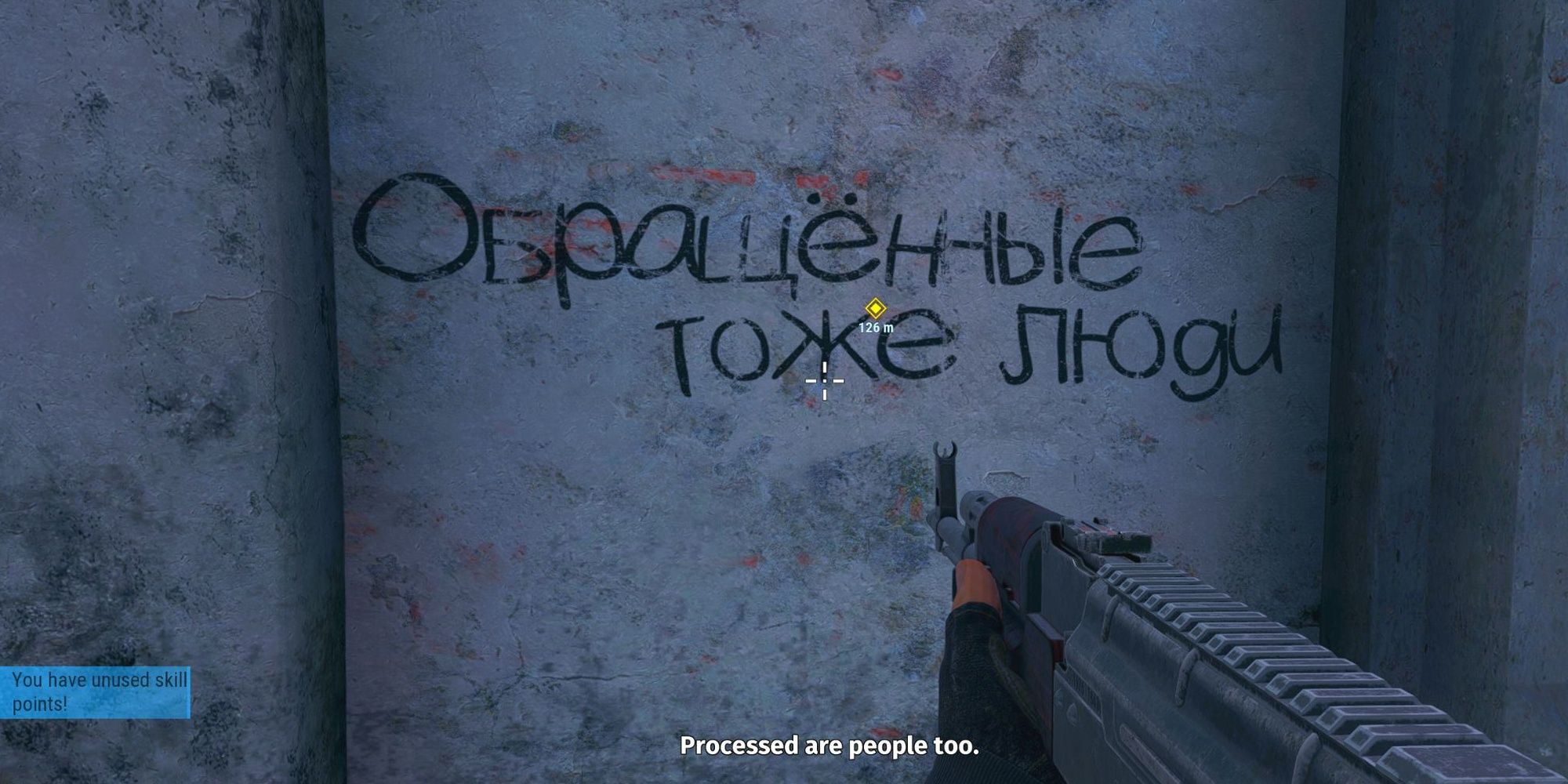 Serious Sam 3 introduced the decipher system to the game world. You could walk up to Egyptian writing or a stone tablet and decode the text for additional lore. Serious Sam 4 didn't have this feature, but Siberian Mayhem brings it back.

Many Russian texts in the environment can be deciphered, and you can get cute little messages from them. If you see graffiti in the game world, walk up to it, and you may be able to figure out the text. 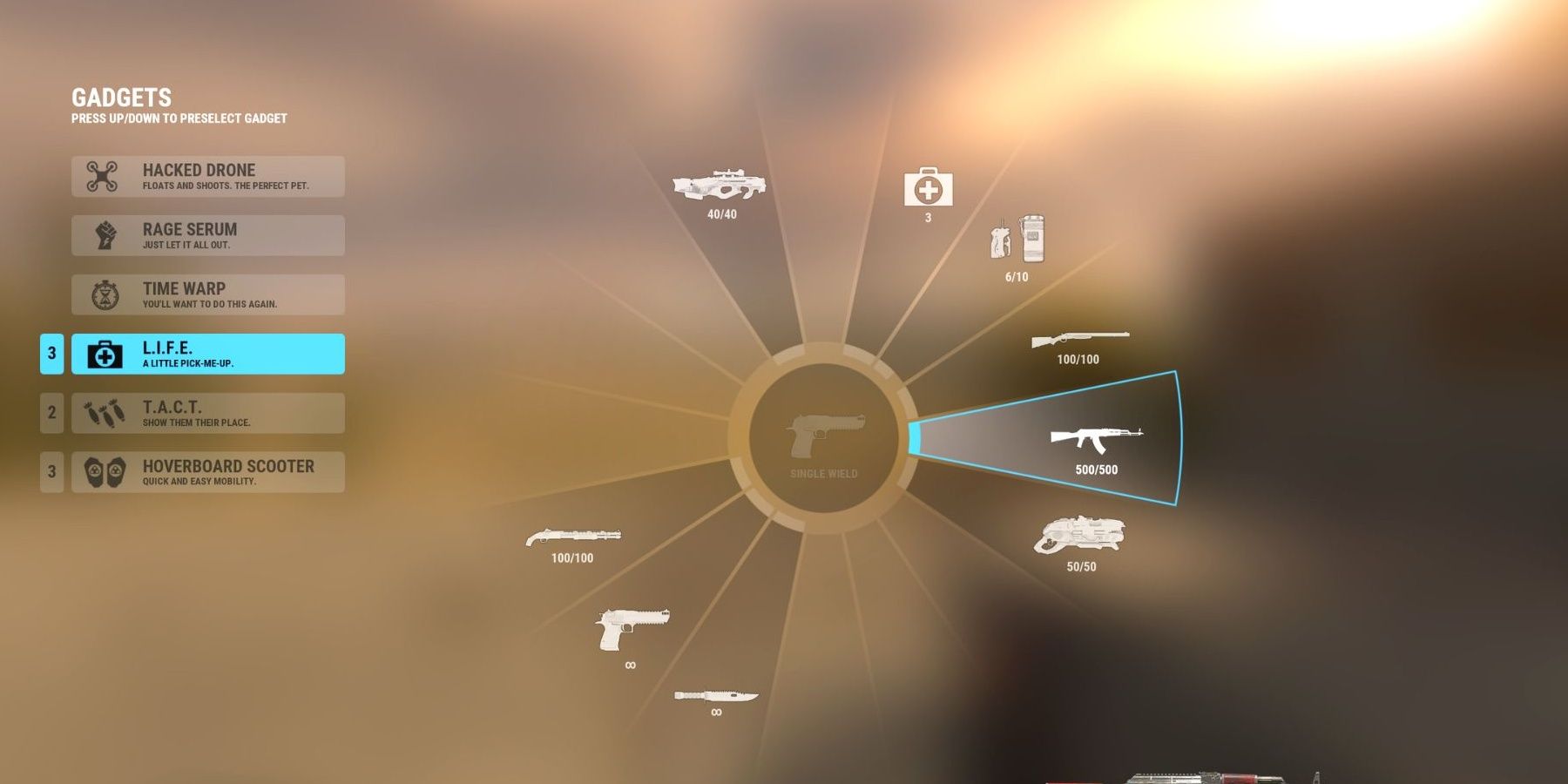 Since Siberian Mayhem is an expansion to Serious Sam 4, you may have played Sam 4 right before jumping into this one. If that's the case, you might be mixed up by the different weapon wheels.

For the first two-thirds, this shouldn't be much of an issue since you don't have a ton of weapons. However, it can get confusing by the final third when you have the full arsenal. The Gatling Gun in Sam 4 was towards the right, but now it's towards the left. This can really confuse you in the more hectic fights later on, so learn the new placements earlier rather than later.