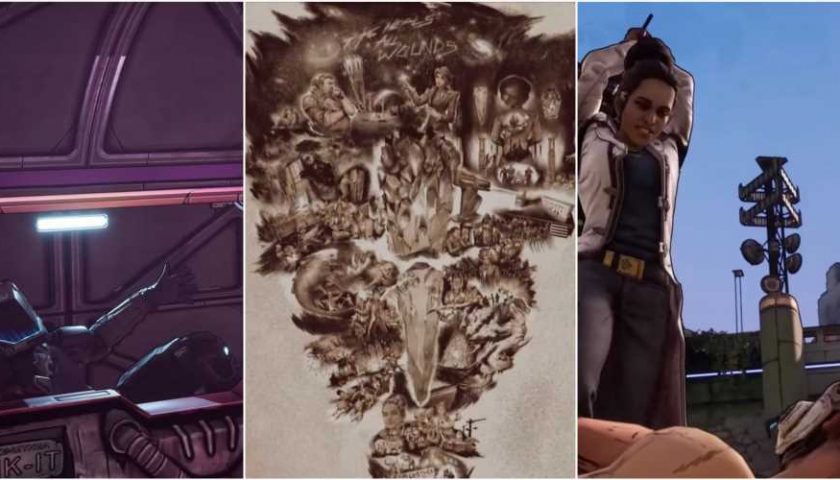 It's only a given that video games can have questionable content and story beats that don't often seem like they should work. However, you'll find that most of the things that don't make a shred of sense in New Tales from the Borderlands can also purposefully play into the comedy and narrative. And there are plenty of those moments.

There are also instances where the nonsensical aspects of New Tales can take away from the gameplay experience and bring attention to certain things that could use some tweaking. Below is a fun and reflective offering of elements that don’t make any sense in New Tales from the Borderlands.

This article contains spoilers for New Tales From Borderlands' story. 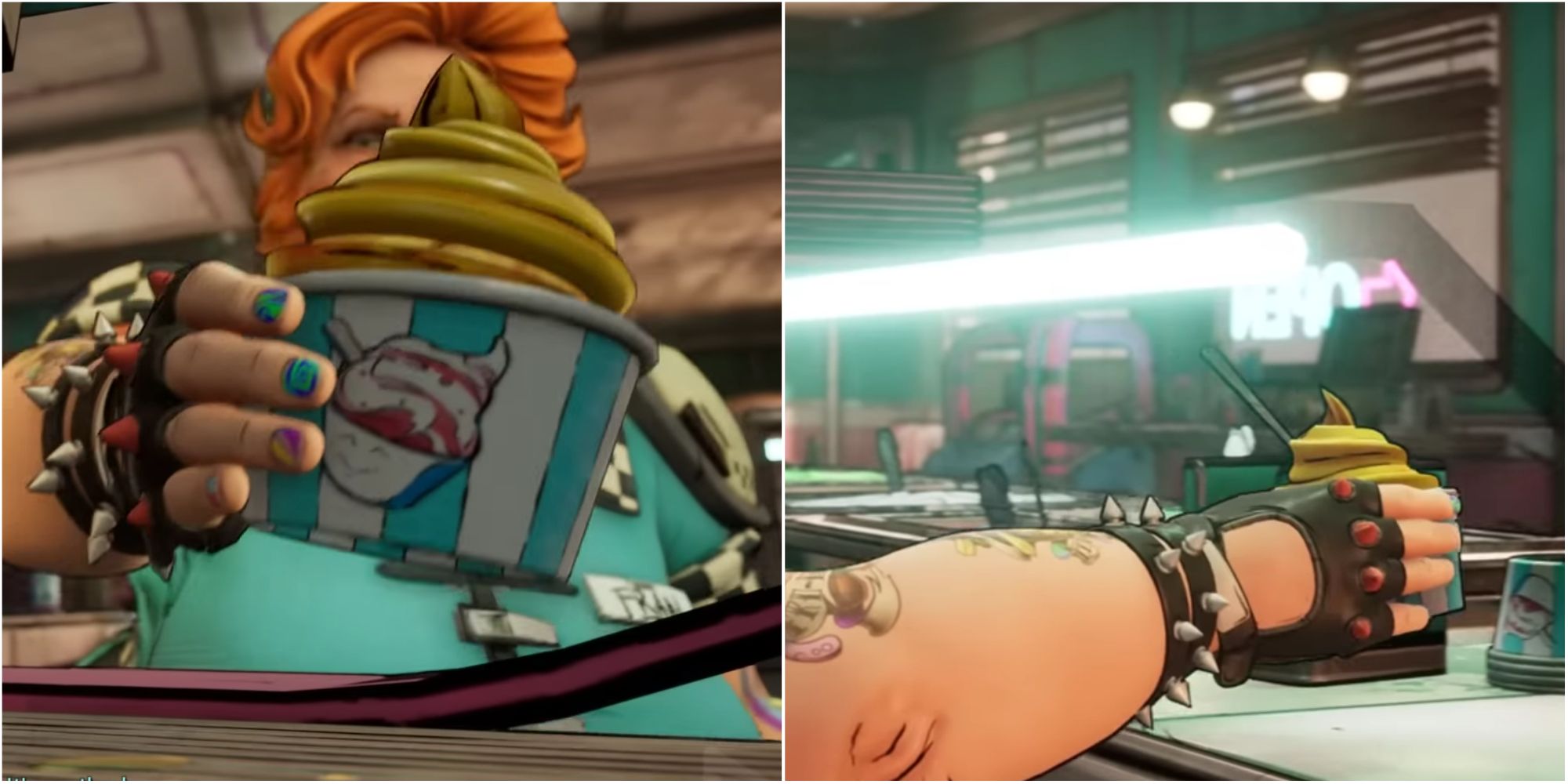 Although this might be a silly one to mention, silly is Borderlands' middle name, and there's a high threshold for questions on this one. Fran is a frozen yogurt shop owner with a short fuse and one of the game’s main playable characters. During the level where an insurance agent is inspecting the damages done to her business, Fran serves the agent a cup of her froyo.

In one frame, Fran pours the frozen yogurt into a small plastic bowl and then gets ready to deliver it to the customer. In the very next frame, as Fran is taking it toward the counter, out of nowhere, a spoon spawns directly inside the swirled layers of frozen yogurt. It’s strange that there was no animation showing Fran grabbing a spoon, but it does add some hilarity. 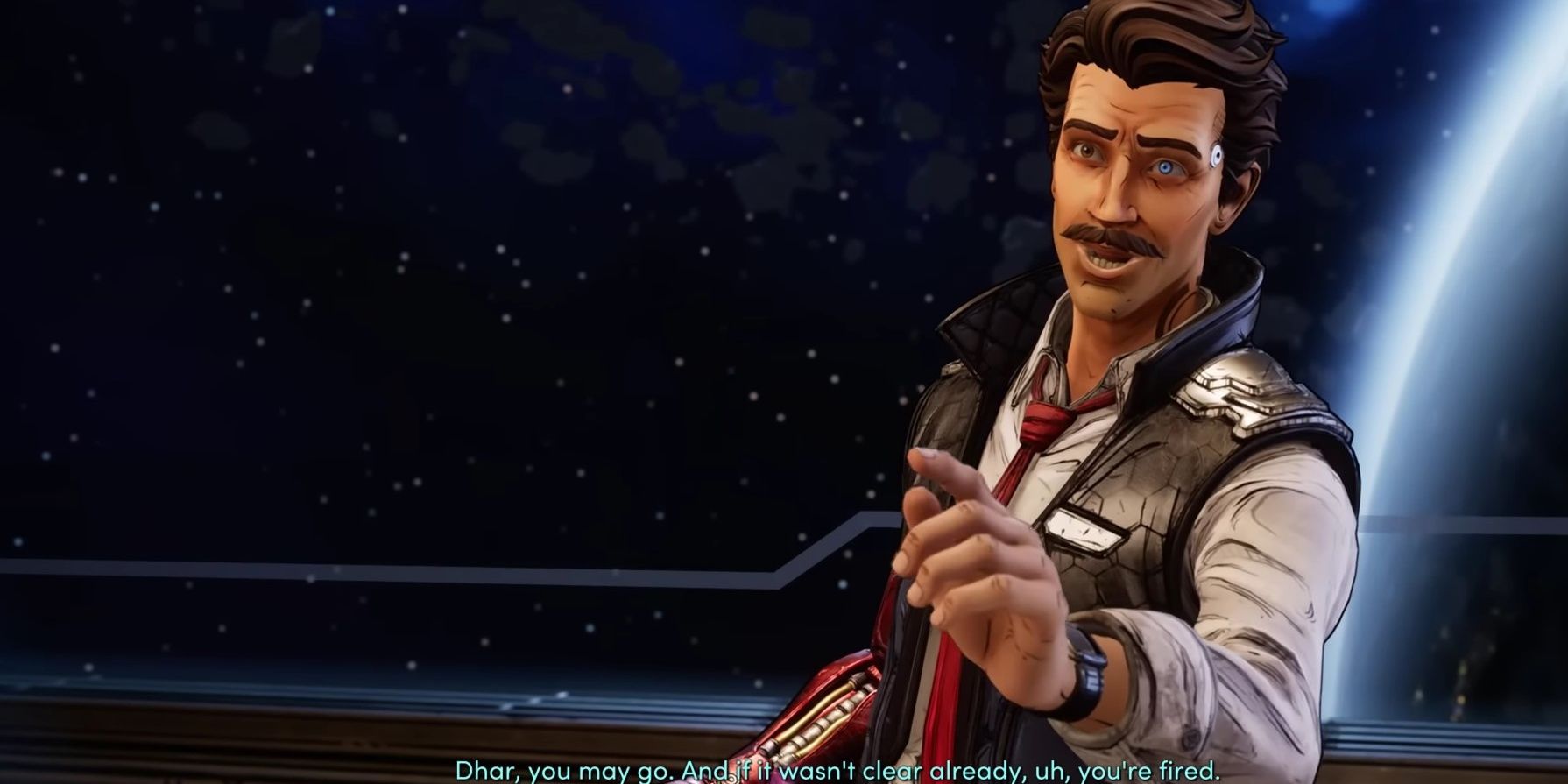 New Tales from the Borderlands sees CEO Rhys Strongfork exhibiting even more anger and frustration, understandably so due to the rut Atlas finds itself in. Rhys' main gripe is that Atlas is wastefully depleting its resources and money without producing any worthy results, and when a terrific opportunity arises, he ruthlessly shuts it down.

Brilliant lead scientist Dr. Anu Dhar has invented one of the most ingenious and revolutionary weapons capable of teleporting enemies into some point of time and space from which they can't return. Instead of developing the prototype further and providing Anu with extra assistance, he makes the rash decision of firing her. 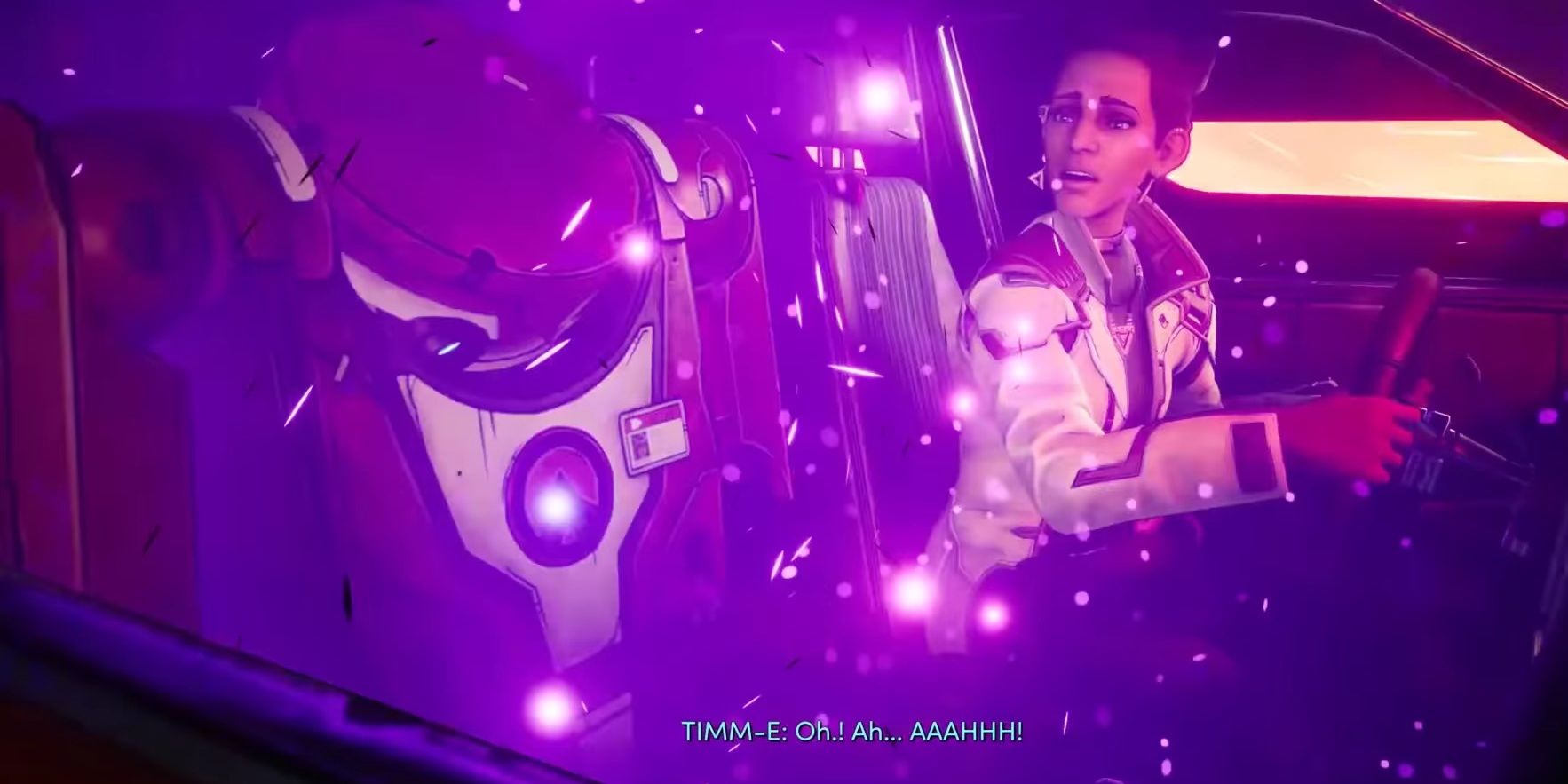 After Rhys goes livid over some items teleporting away during Anu's demonstration of her weapon, his Atlas-commissioned robot assistant TIMM-E volunteers to return them by entering through the portal Anu fires. From there on, TIMM-E begins erratically teleporting around the game, popping up in the most random moments for a brief second.

It’s an odd occurrence to behold, considering Rhys' belongings, and other enemies Anu tested the Siren weapon on, were never seen or heard from again. And it makes you wonder if there’s some property within TIMM-E’s build that causes such an anomaly, and that it’s more than just a comedic gag. 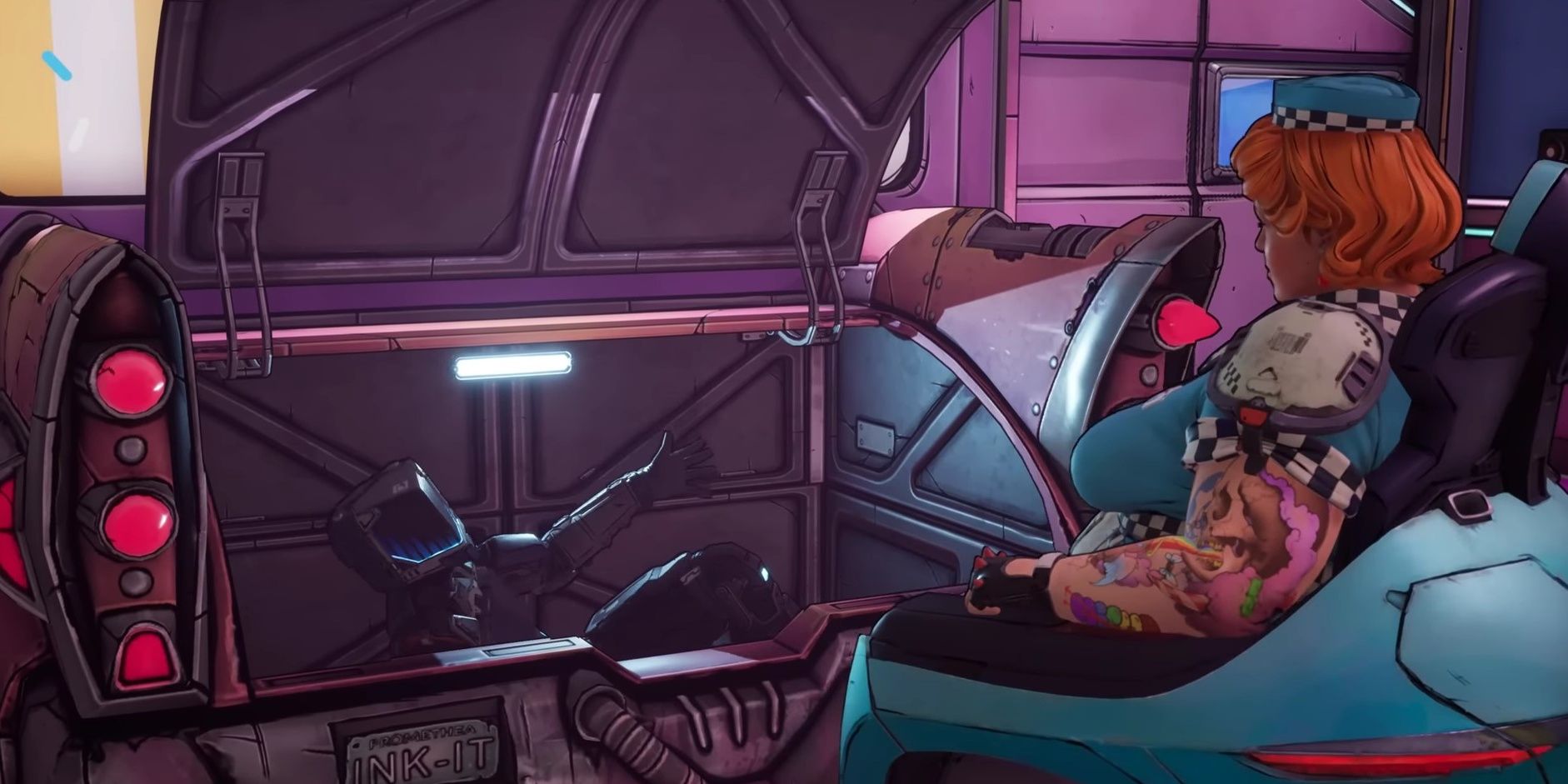 Badass Superfan is the embodiment of a competitive spirit, following your group around the entire game with the hopes of besting you in a match of Vaultlanders. He appears out of nowhere and always seems to know exactly where you'll be, even somehow getting inside Fran's Frogurt establishment and sneakily hiding around.

It begs the question of how does he know where you are, and then get inside Fran's before the rest of the team? Does Fran never close her shop's doors? How does he just freely leave his Tediore post? It's extremely weird that Badass Superfan is more interested in playing Vaultlanders with random strangers he's supposed to be capturing rather than performing his Tediore duties. 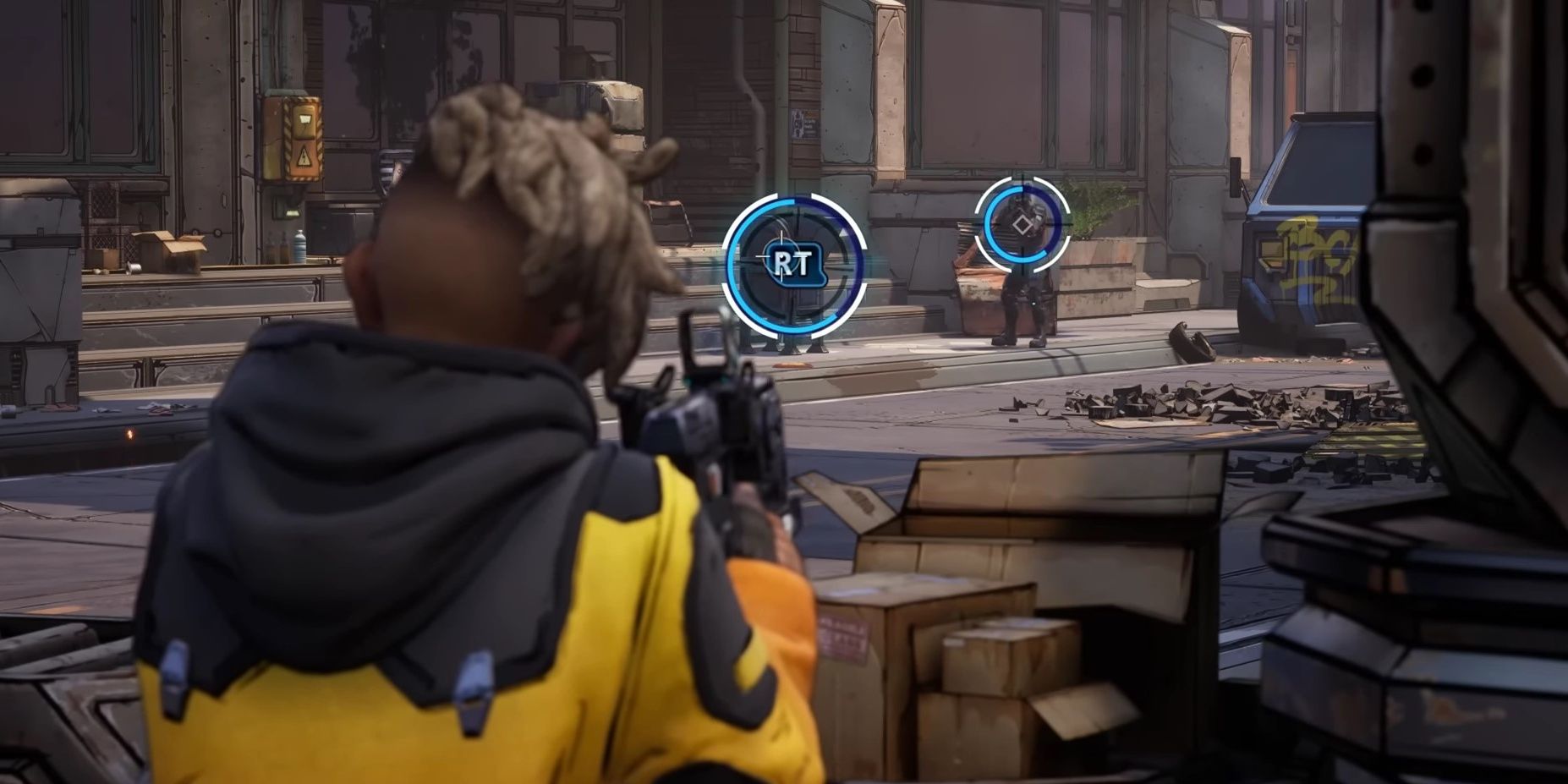 At the start of the Tediore invasion on Promethea, Octavio takes a talking assault rifle named Brock as a weapon, even though he isn't a fan of senseless murder. Then a scene plays out where you have to shoot at enemy soldiers, but you can choose to fire at nearby objects. Brock slaughters the human targets regardless, which doesn’t feel right because Brock is loyal to Tediore and becomes a vicious side villain later in the game, especially when he kills Anu.

The entire shootout feels out of sorts because Brock gives up Octavio's position, and then regroups with the Tediore agents anyway. So why would Brock allow himself to be used by his enemy when he has legs and could've taken a swipe at Octavio and ran back in the first place? 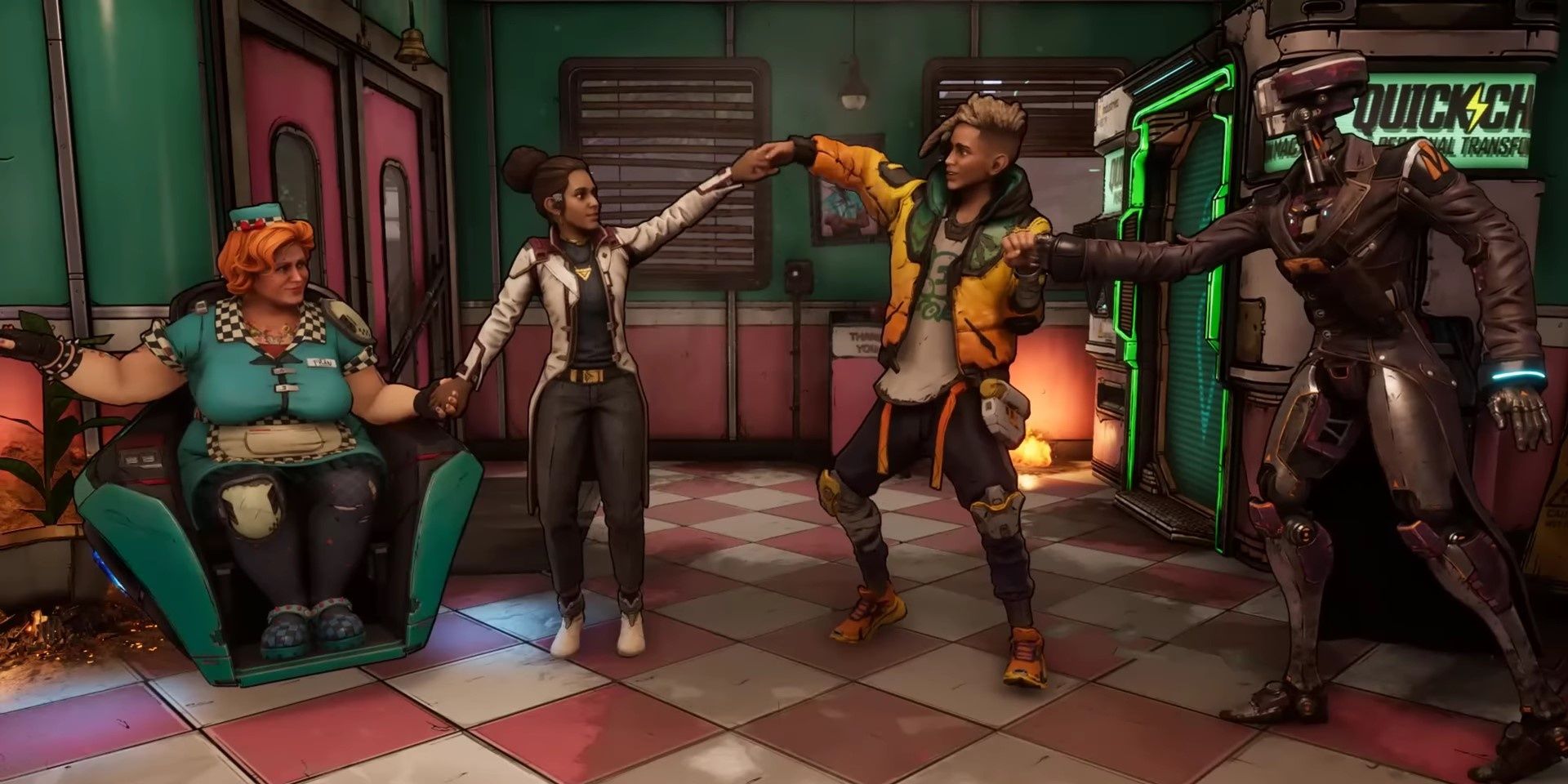 Episodes in New Tales from the Borderlands are sometimes interrupted by montage sequences that feel quite disjointed with the pacing and style of an interactive branching narrative game. They have nothing for you to do other than sit back and watch a drawn-out cutscene with strange music that doesn't match the context.

The montages are there to show time passing and the team bonding with one another, but they don't really add much nuance to the story. Cutting to the "hours later" scene would prove sufficient, or incorporating quick-time events into them would've made more sense for a game like this. 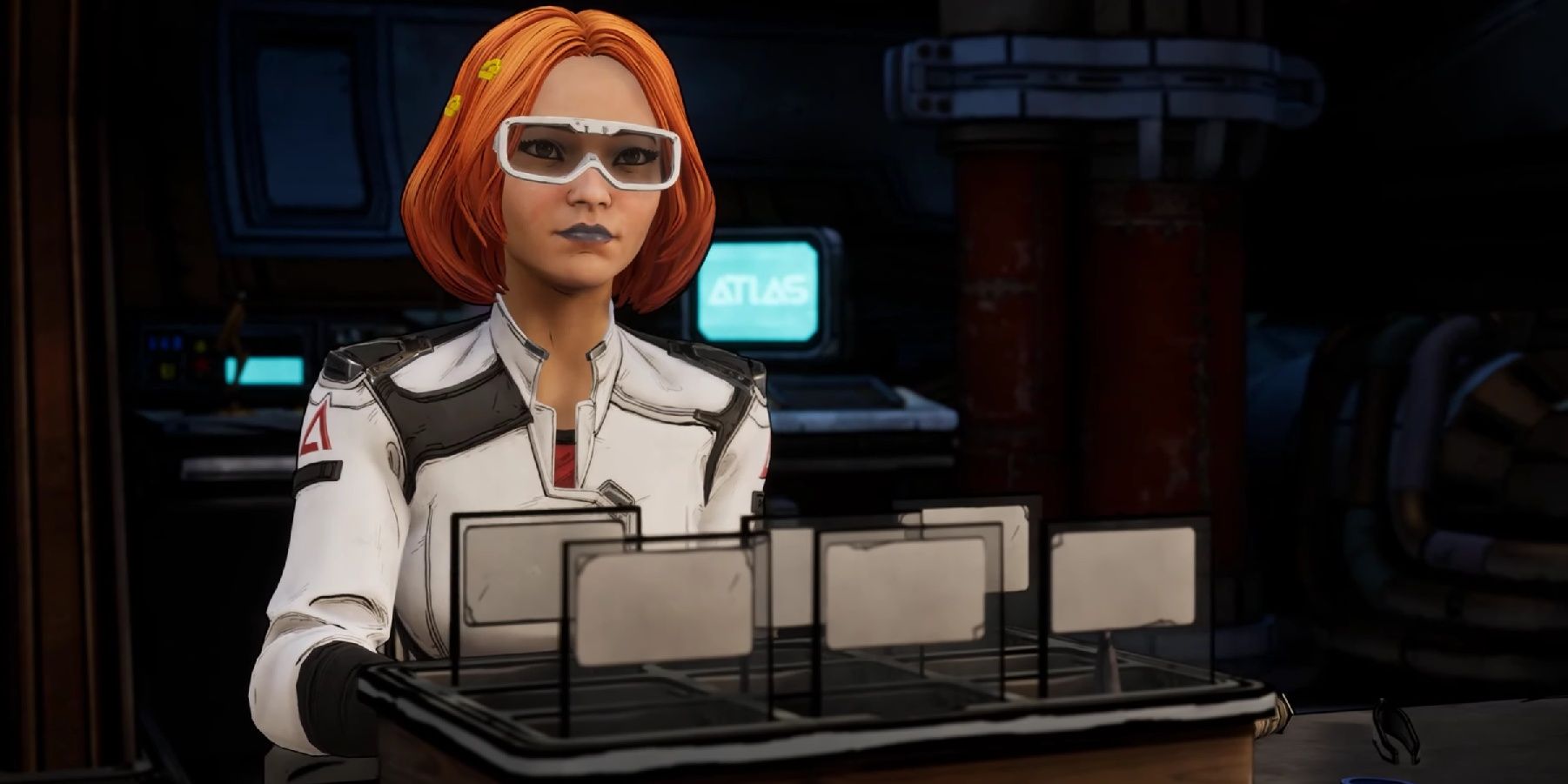 Puong is a phenomenal character in the game and is truly underutilized. What L0U13 is to Octavio, Phuong is to Dr. Anu Dhar. She’s friendly and expresses a ton of sarcasm in her jokes to Anu, and they have a playful and relatable dynamic of coworkers that are also close friends.

It feels a bit of a missed opportunity that she wasn’t present more throughout the story to explore this relationship further since Phuong briefly appears at the beginning of the game and then shortly again near the end. Sure she had to cause a distraction, but it also doesn’t make sense why she’d remain at Atlas and not go with Anu when she’s her research assistant and Anu is without a job. 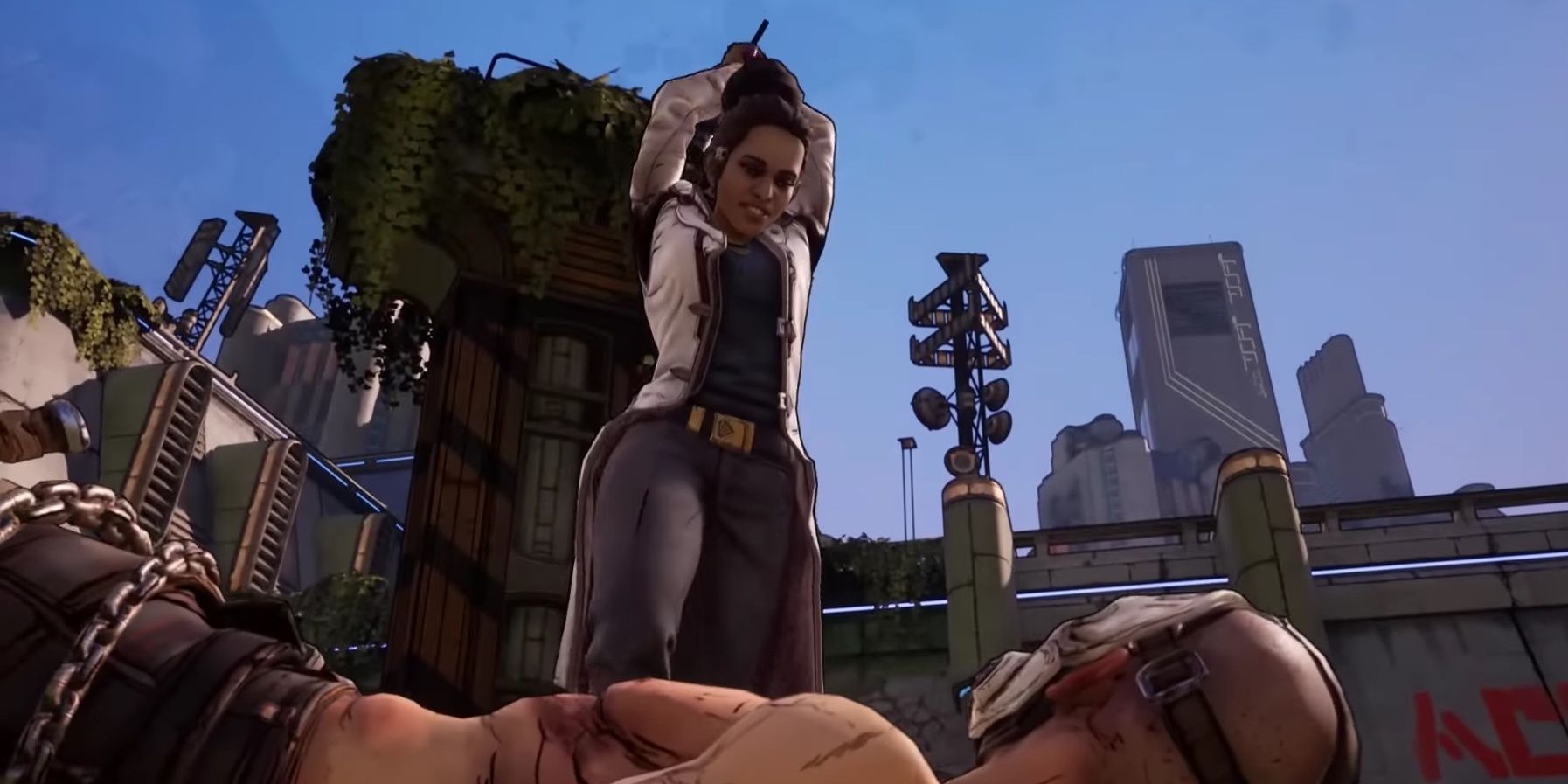 Anu Dhar is the most peace-loving and amicable character you can ever meet in Borderlands, utterly averse to any form of violence. She even made it her research initiative to create the only gun not meant for killing. But an early sequence in the game ends in her brutally killing an NPC regardless of player input or choice. That hardly makes any sense, right?

After she crash-lands on Promethea, she encounters a band of Psychos that give chase and force her to use the teleportation gun. You successfully shoot two out of three, but the last one overpowers Anu after the gun malfunctions. During the quick-time event struggle that follows, there’s no non-lethal option available other than to have Anu kill him, which is jarring after just establishing her as someone who wouldn’t ever turn to murder if her life depended on it. 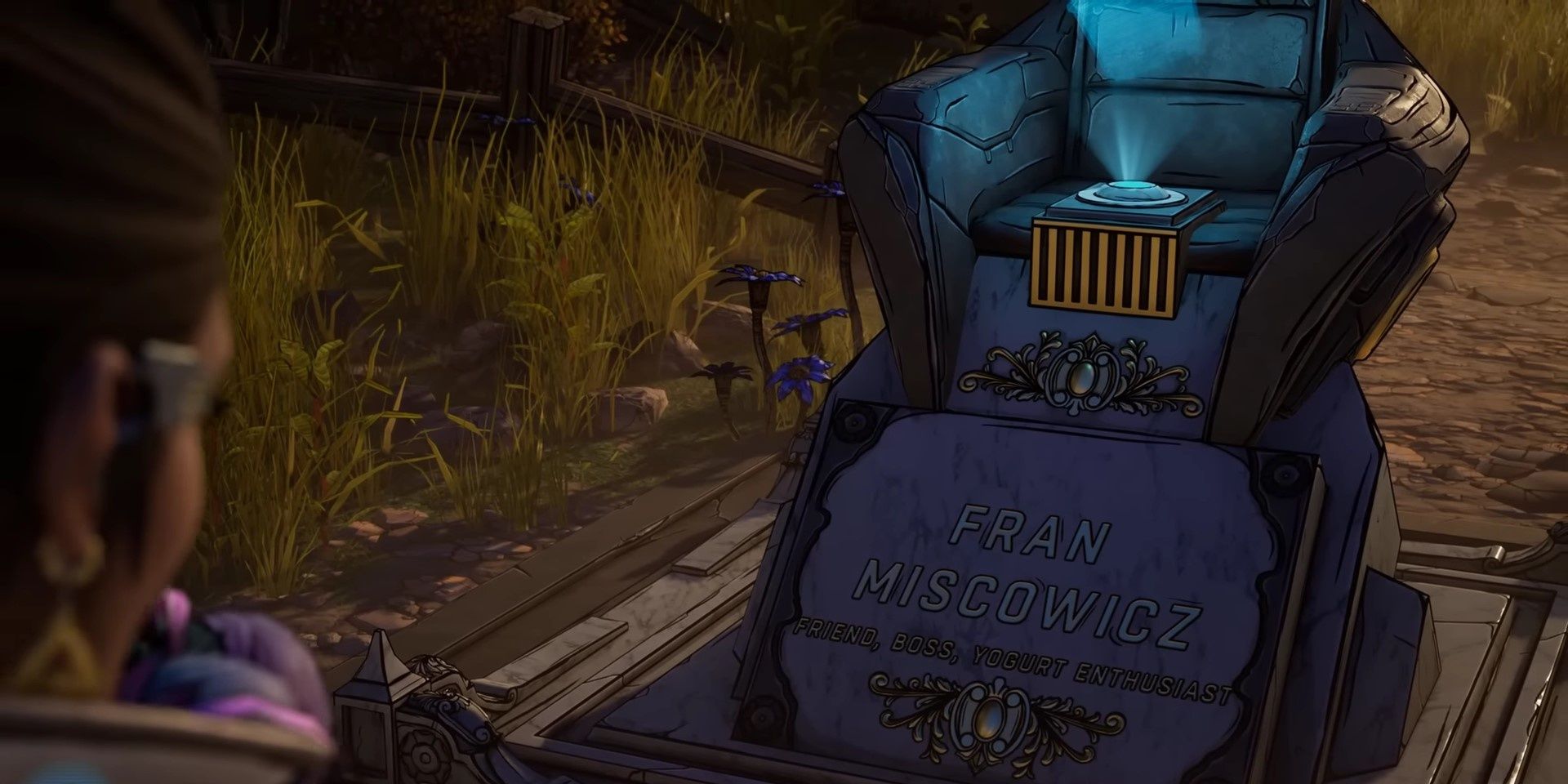 A signature mechanic of Telltale games was displaying messages about how a decision you made affects another character, but it's a pretty disappointing feature in New Tales from the Borderlands. L0U13 creates a friendship scoring system for the main group based on skateboard points.

Even if you have all the playable characters alive by the end, they will still die and become a gravestone after the final mission because of the low relationship score. Everyone's play style is different, and you may not want to keep up good relationships to make things interesting but still aim to keep everyone alive, so this erases all that effort. 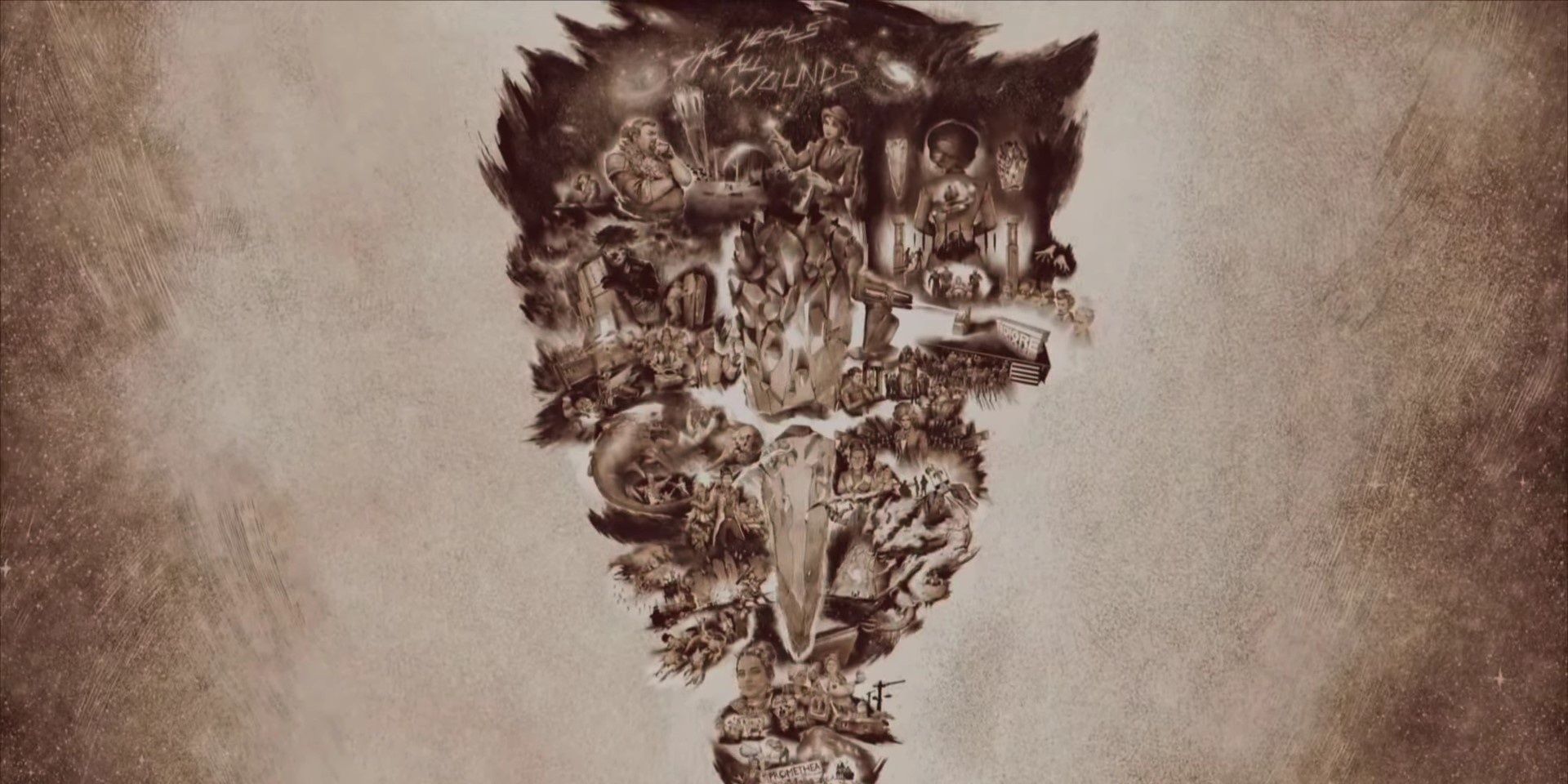 The game ends with a big reveal of Fiona partaking in the final narration with Marcus. It's an epic moment to see Fiona return to the Borderlands Universe, but this twist also leaves you with a lot of questions. How did Fiona and Marcus get wind of Anu and her brother? Have their paths crossed? Could they have helped, or are they searching for them?

The other shocking moment is the lasting image displayed on the screen before the credits roll, where a giant face forms out of all the art from the game. There’s no telling what that face could be. It looks close to Handsome Jack, but it could be a tease for a mysterious new villain.