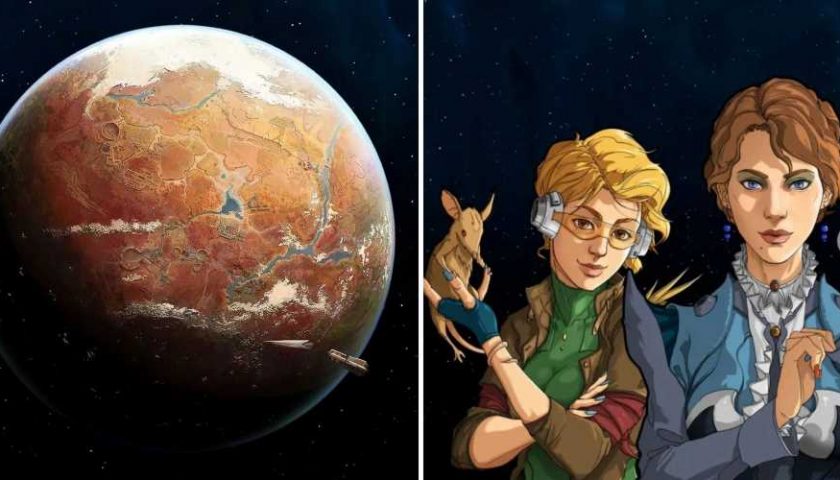 RimWorld is a simple colony simulation game that lets you figure out the more nuanced mechanics on your own. And without a beginner's guide to set you in the right direction, even after getting through the relatively short tutorial, you could find yourself in for a rough go at the game. To say that this title has its challenges is an understatement.

Once you get through the basics of gameplay and fail a ton of times to get things properly set up, you can begin to appreciate the small details that are included in RimWorld. On a macro scale, you might love the strategy or the difficulty level. On a microscale, we have some details that may have gone unnoticed or forgotten about when building a colony. 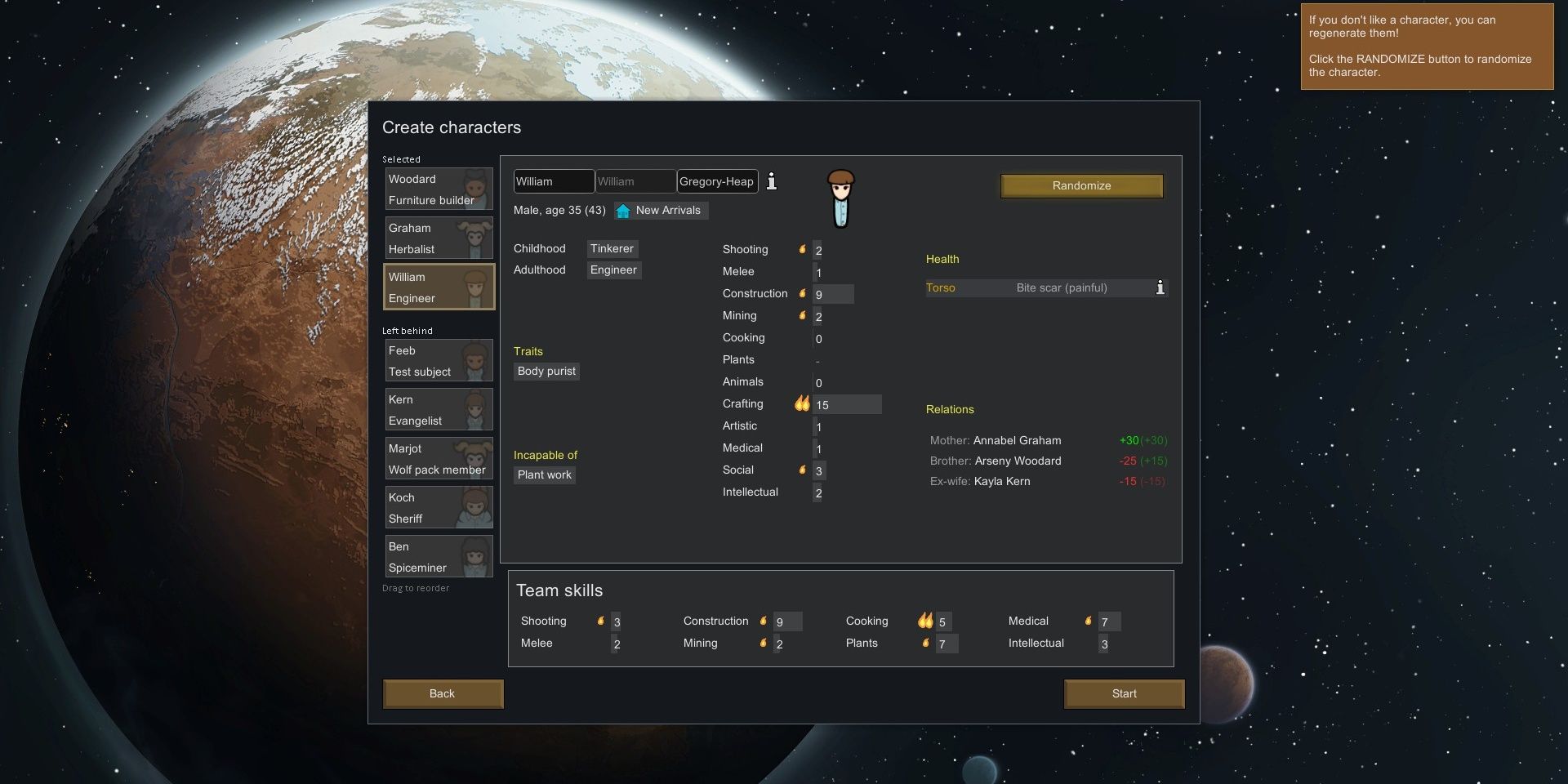 The music doesn’t overtake the whole game. Normally with simulation and building games such as RimWorld, the music strums in the background where you wouldn’t hear it.

However, RimWorld focuses more on the audio of the survivors chopping trees or clearing ore. The small detail that we appreciate is the fact that the music crescendos when the game is paused, allowing you to have a casual and relaxed experience while planning out your next construction project.

9/10 The Calendar Holds The Keys To Healthy Colonists 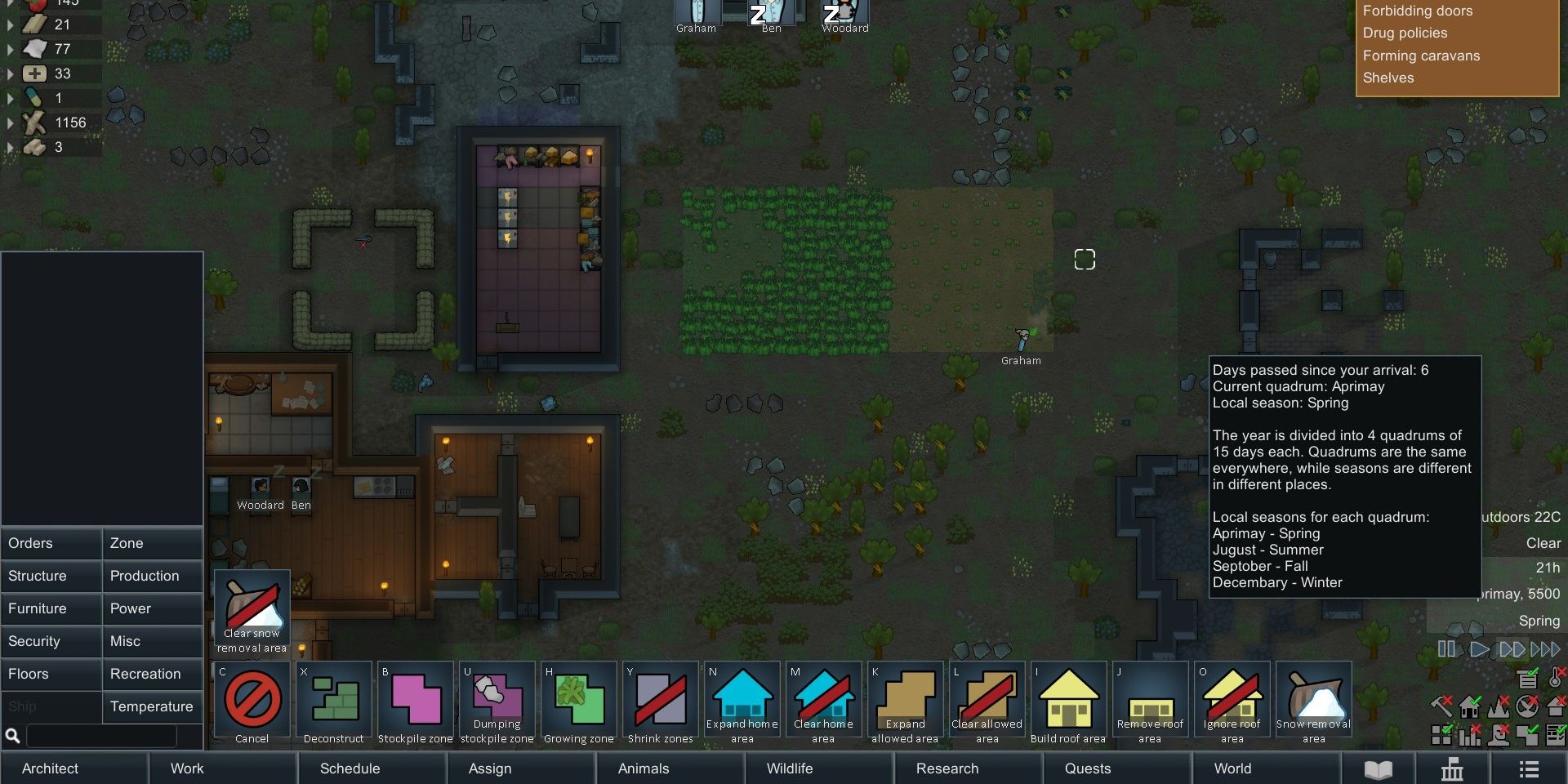 RimWorld has many menus to peruse in order to build up a successful colony through zoning, material farming, and task assignments. While many of these menus hold the keys to victory, one of the games' most useful and best details is the calendar.

Unlike most colony builders which have season indicators or single months to time out harvest time, RimWorld takes the names of two existing months and mashes them together as one word (and season) to simplify gameplay, especially since the rest of the game requires heavy micromanaging. As an example, Aprimay represents springtime whereas Decembary would be winter. While this is an attractive small detail we love, shouldn’t it be called Decemarch to cover the remaining missing months? 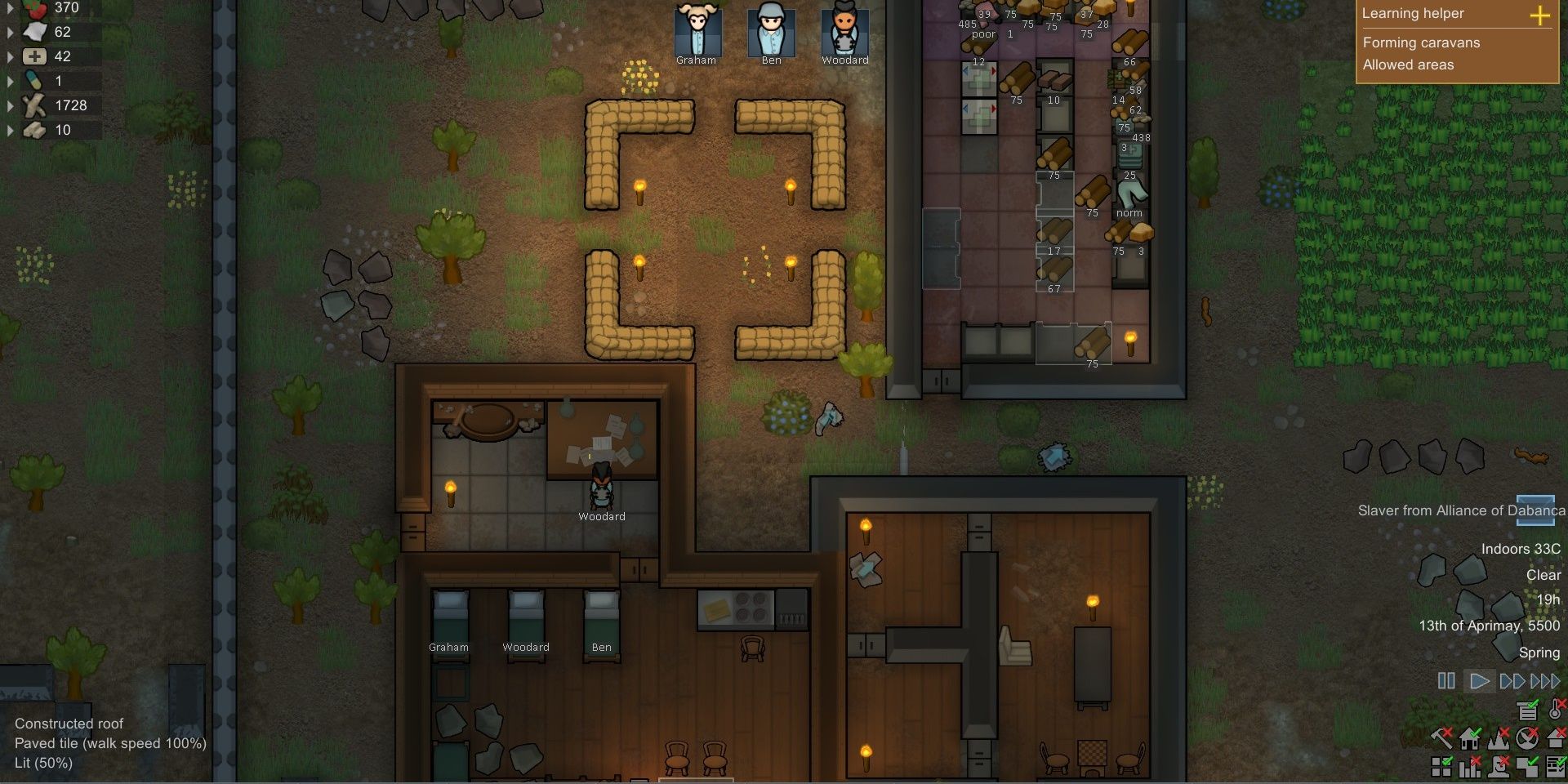 Maybe this detail is a personal point of amusement, but colonists are better equipped for survival by learning new upgrades through the research tree. That in itself isn't the entertaining detail, though. What causes a reaction is the animation you see when a colonist is using the research desk. If you zoom in to look at what the colonist is doing, it is apparent that they are literally pushing papers around.

Unlike other colony-building games which have research trees that require a couple of resources or time to pass, RimWorld physically illustrates the act of learning new technology. It's something we appreciate.

7/10 The Avatars Display More Than You Think 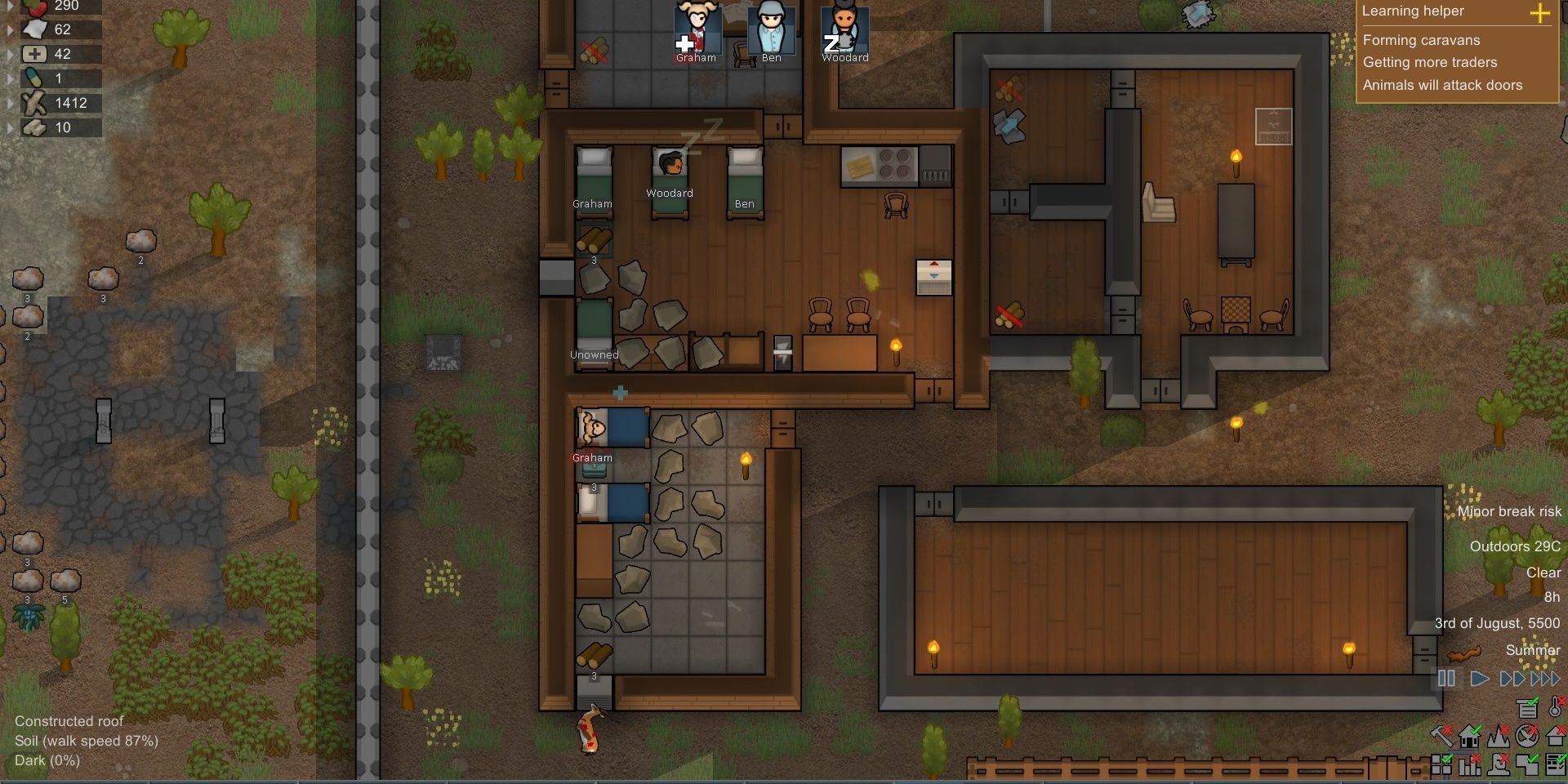 RimWorld has another small detail that we appreciate. When your colonists become wounded, you can visibly see how much damage they’ve sustained. In the image seen above, Graham was badly injured by a vicious rogue gazelle. Thankfully, she intercepted the animal close to the home base and very close to the medical facility, making for a smooth recovery as the wounds were fairly minor.

That said, not all ailments are healed with bed rest or basic herbs. For example, diseases require additional medical care, otherwise, your colonist might die. 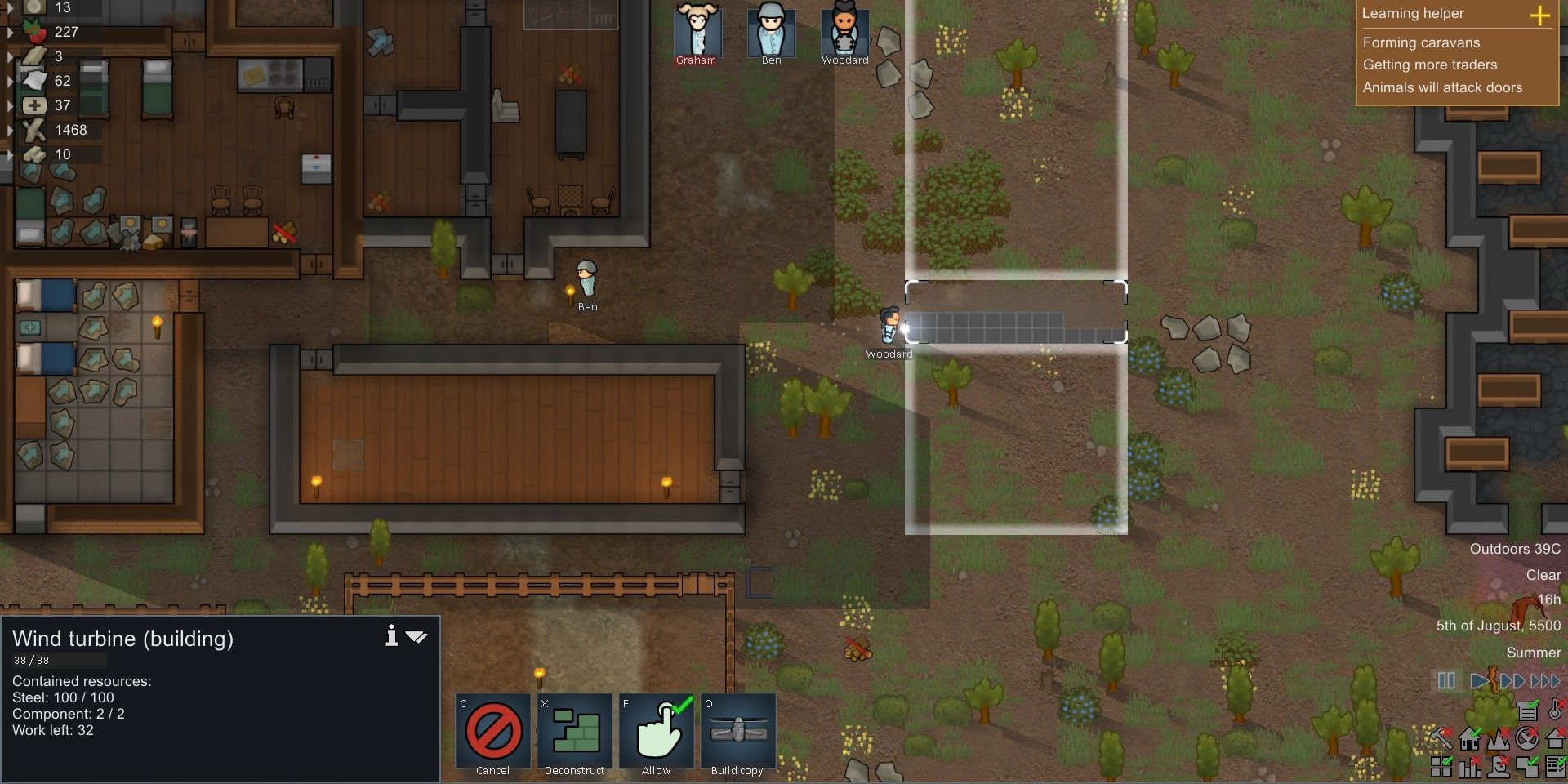 In building games like RimWorld, there will always be aspects you might not appreciate at first. When you consider other colony-building games, there are a couple that can drain PC resources. To combat that issue, building a structure is less detailed. Not only does this allow the graphical focus to be on other aspects of the game, but it doesn't tax your computer system.

The above screenshot displays how RimWorld gets away with filling in the designated area without sacrificing smooth performance, which is appreciated. 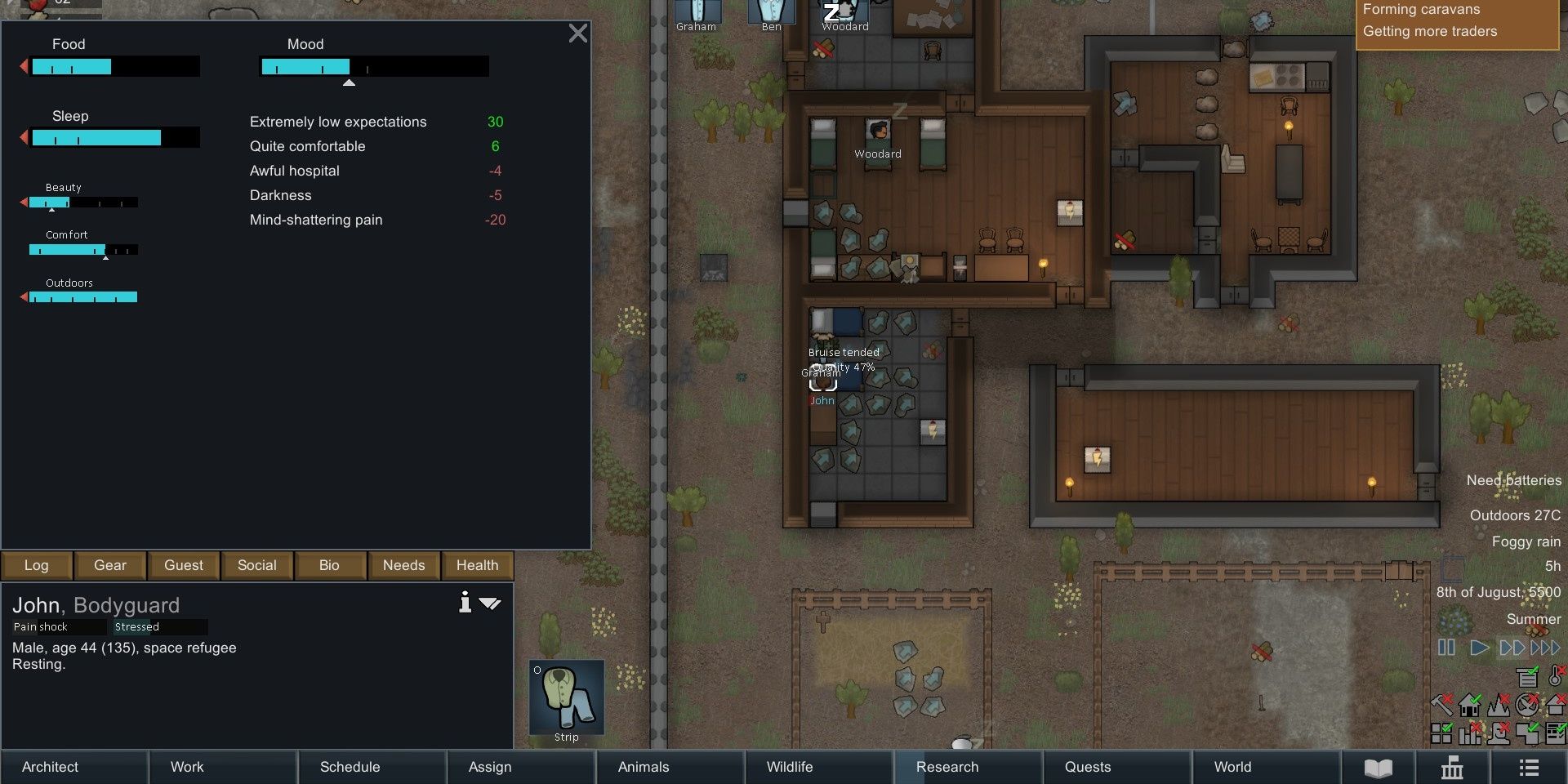 Occasionally your colonists will need to rescue people from neighboring tribes. If you take them to the hospital, they will heal their wounds and potentially join your colony. The small detail that we love with respect to in-game triage is that the game displays text when wounds have healed.

Often video games aren't so attentive to their healing mechanics, so being able to see the colonist's health improvements is appreciated. It’s not like RimWorld has the same level of detail as Two Point Hospital. 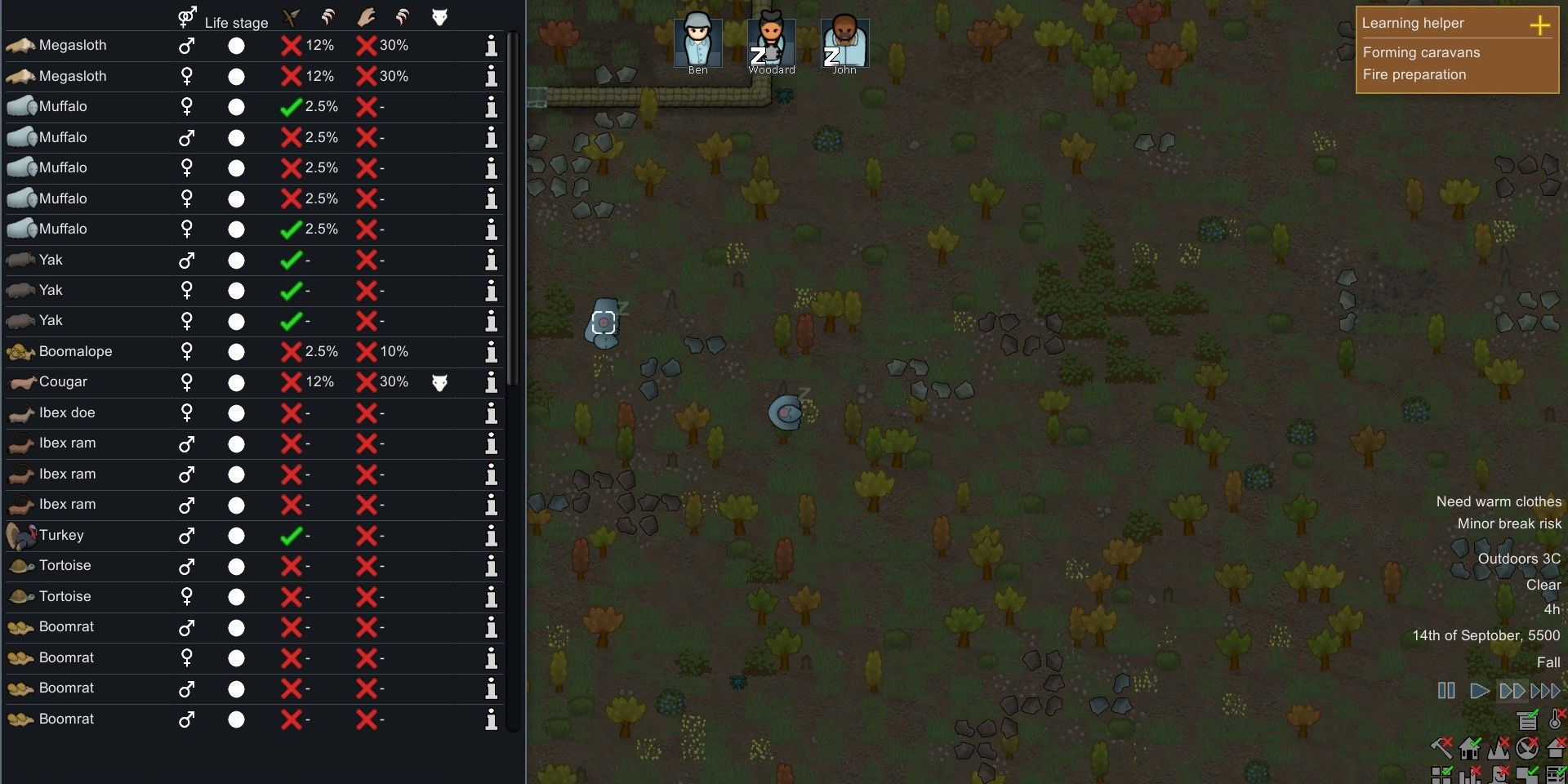 Simulation games often have foraging and hunting mechanics that an AI will execute. As such, you might not be given enough detail about how difficult it is to successfully hunt creatures. Games also don’t tell you what kind of yield you'll receive. Because of this, it can be hard to plan out how many hunters are needed to sustain your colony.

In RimWorld, however, you are able to click on the wildlife tab to hunt specific creatures without having to scour the map. But, what makes this feature great is that the menu displays the animals individually. It has the percentage chance of the colonists being attacked depending on which creatures you hunt. Another feature of this menu that we love is the information you can garner by clicking on the ‘I’. The information tab displays details of the animal’s toxic resistance levels, the type of leather it provides, the yield of meat you can gain, and so much more! 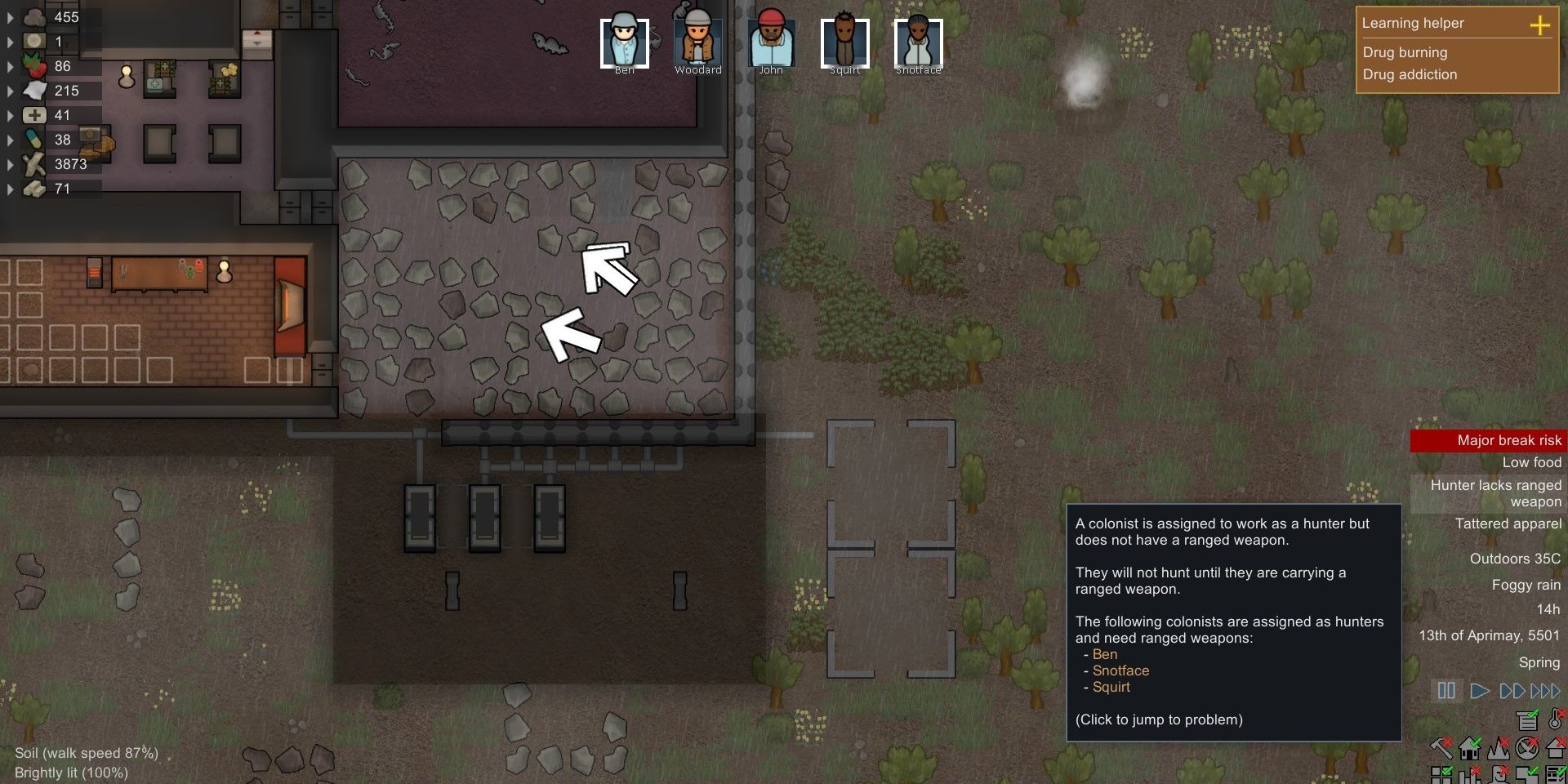 One of the best details we love in RimWorld is the directional arrows that lead to an event location. Throughout gameplay, colonists from neighboring areas may visit your colony to trade supplies. Other times, the directional areas will show where disaster has struck.

Using this feature isn't the only way to track an event down. There are several ways to get the same information like clicking on the right-hand side of the screen when an event appears. You can also click the text that appears in the top left of the screen. If, however, you want these directional arrows, simply scroll over the event and the large white arrows will appear.

2/10 See The Small Details On A Sarcophagus 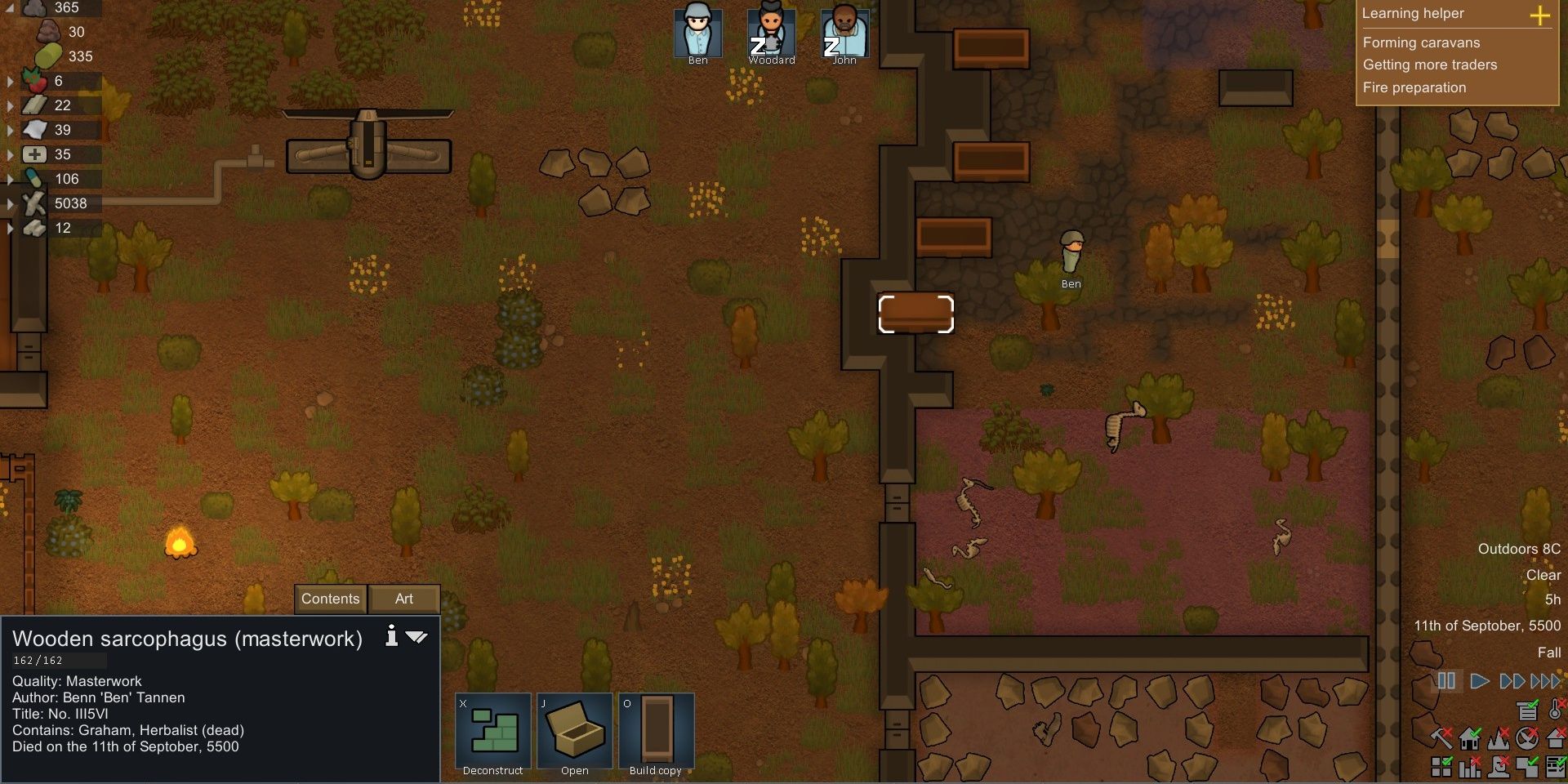 There are many colony survival games that treat death as an afterthought. In RimWorld, it’s different because if your colonist dies due to illness or wounds, you need to bury them in a sarcophagus.

What is good about this is that after your colonist has died, you can click on the sarcophagus to see the quality of the coffin, the creator, who is buried in it, and the date of death. It may be a small detail, but we love to see respect paid even in games such as this one.

1/10 Colonists Pay Respect To The Dead 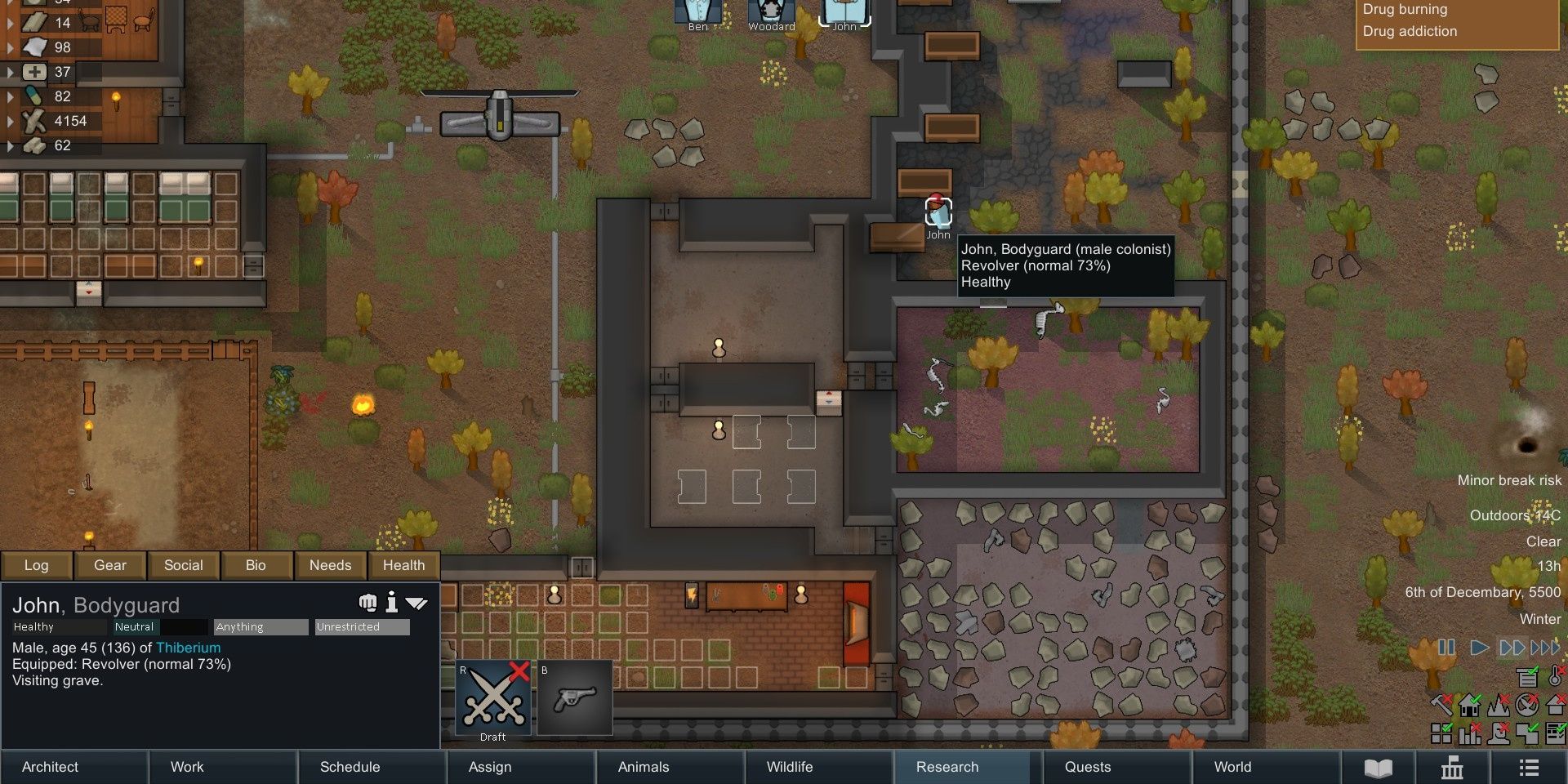 Going with the previous feature of honoring the dead in RimWorld, there is another added detail that we appreciate. Unlike other colony builders, when people die, there is very little attention paid to visiting the grave site or honoring the dead as you can in games like Spiritfarer.

During gameplay, after a person dies, your colonists will actually take the time to pay their respects. This isn't a detail that is often considered in video games, but it is one we love. It’s great to see how much some developers care about their games.