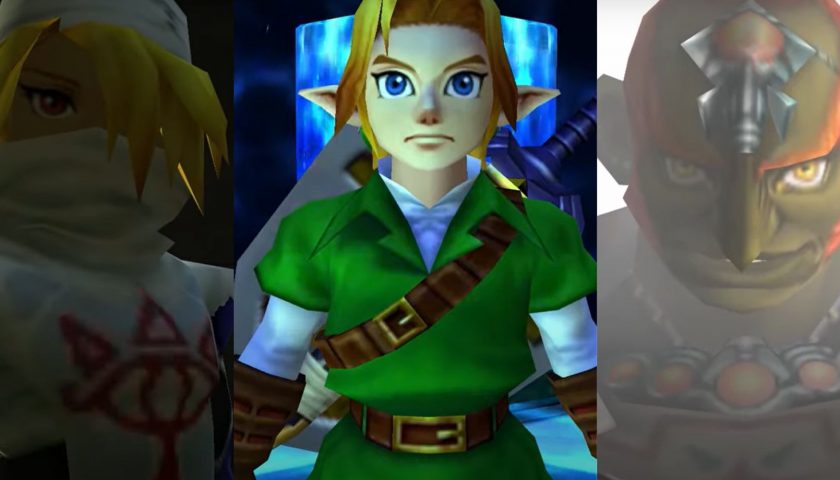 Some video games never get old no matter how many times you beat them, and The Legend of Zelda: Ocarina of Time certainly falls into this category. After recently being inducted into the Video Game Hall of Fame, Ocarina of Time is still making its mark on the gaming community decades after its initial release, and it isn’t hard to see why.

There are probably hundreds of moments in Ocarina of Time that make the game special, but only a few really stand out as ones no player will ever forget. Some are funny, some are surprisingly poignant, and others are just downright bizarre. Ultimately, though, these memorable moments all come together to make The Legend of Zelda: Ocarina of Time a true gaming masterpiece. 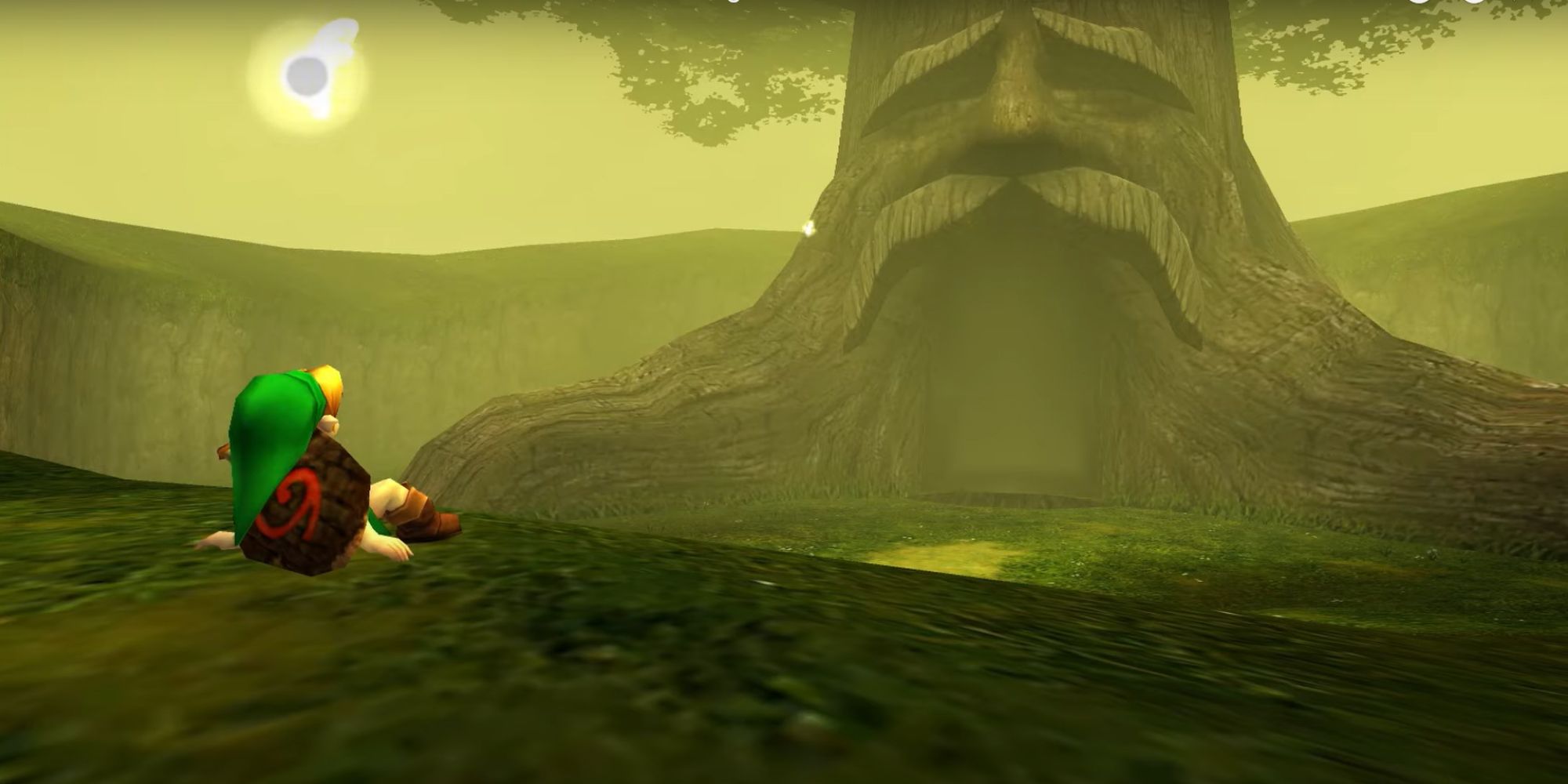 When Link enters the Great Deku Tree, his destiny is unclear. By taking players on a journey through ancient Hyrule history, the Great Deku Tree sets the stage for the game's primary goal: rescuing Princess Zelda and obtaining the Sacred Triforce before Ganondorf. As the tree's story winds down, so does the pace of dialogue as Link watches as his father figure literally withers away in front of him.

This initial loss sets a somber tone for the rest of the game and reveals the hidden darkness within Link's journey to the light. Navi's final "good-bye….Great Deku Tree" line highlights the sacrifice any real hero must make to ultimately achieve good. 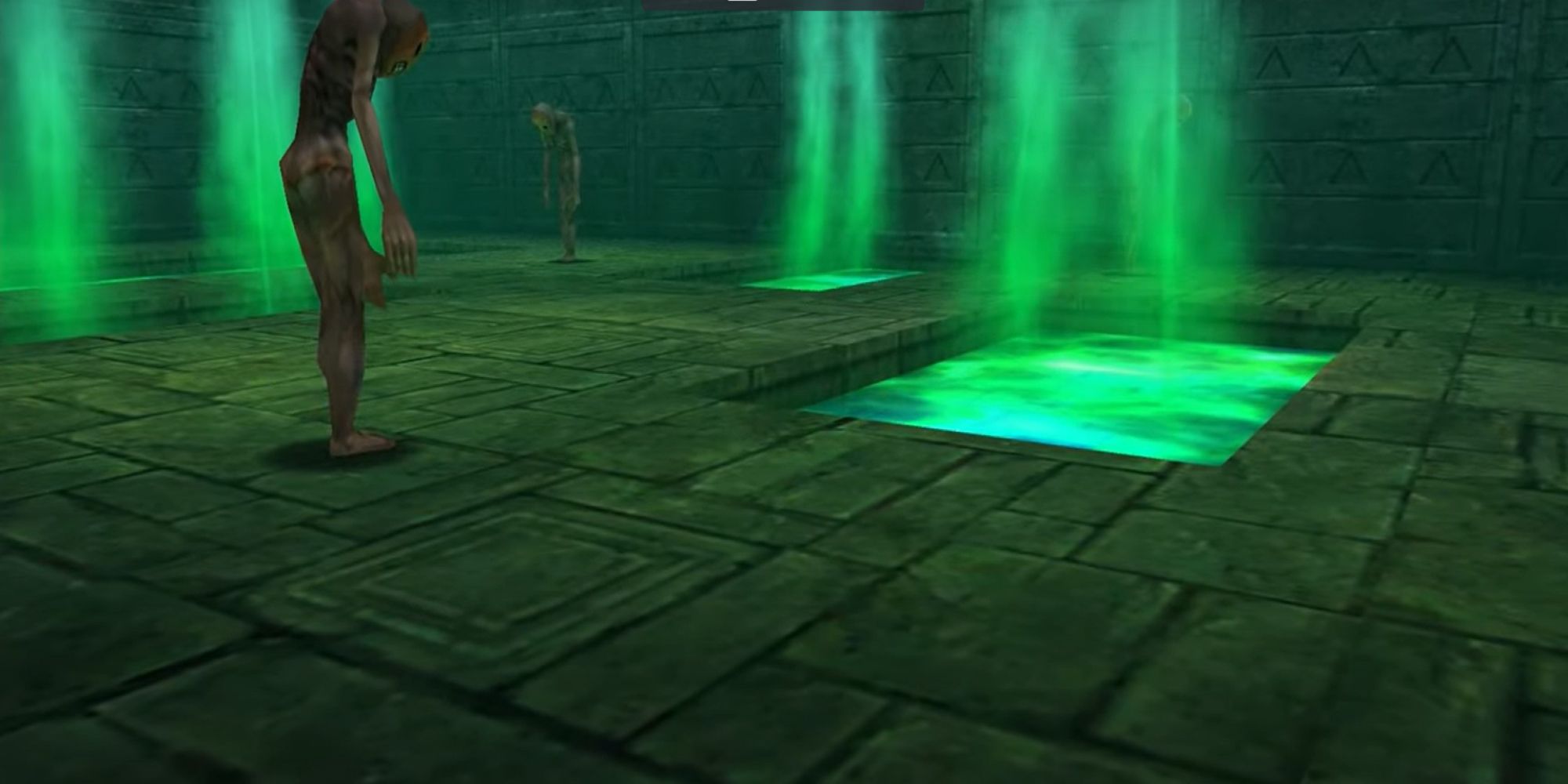 There is plenty of nightmare-inducing imagery in Ocarina of Time but the first time a ReDead shows up, when entering the Royal Family's Tomb in Kakariko Village's graveyard, is without a doubt the most horrifying. These zombie-like creatures may be the most frightening monster in any Legend of Zelda project to date.

As Link attempts to creep around them, the game's controls slow to a crawl as the tall undead monsters slowly move towards him. Straddling young Link, the ReDead drain heart energy while emitting a blood-curdling scream. As the game progresses, these enemies become easier to beat. But as with many things, you never forget your first encounter with the living dead. 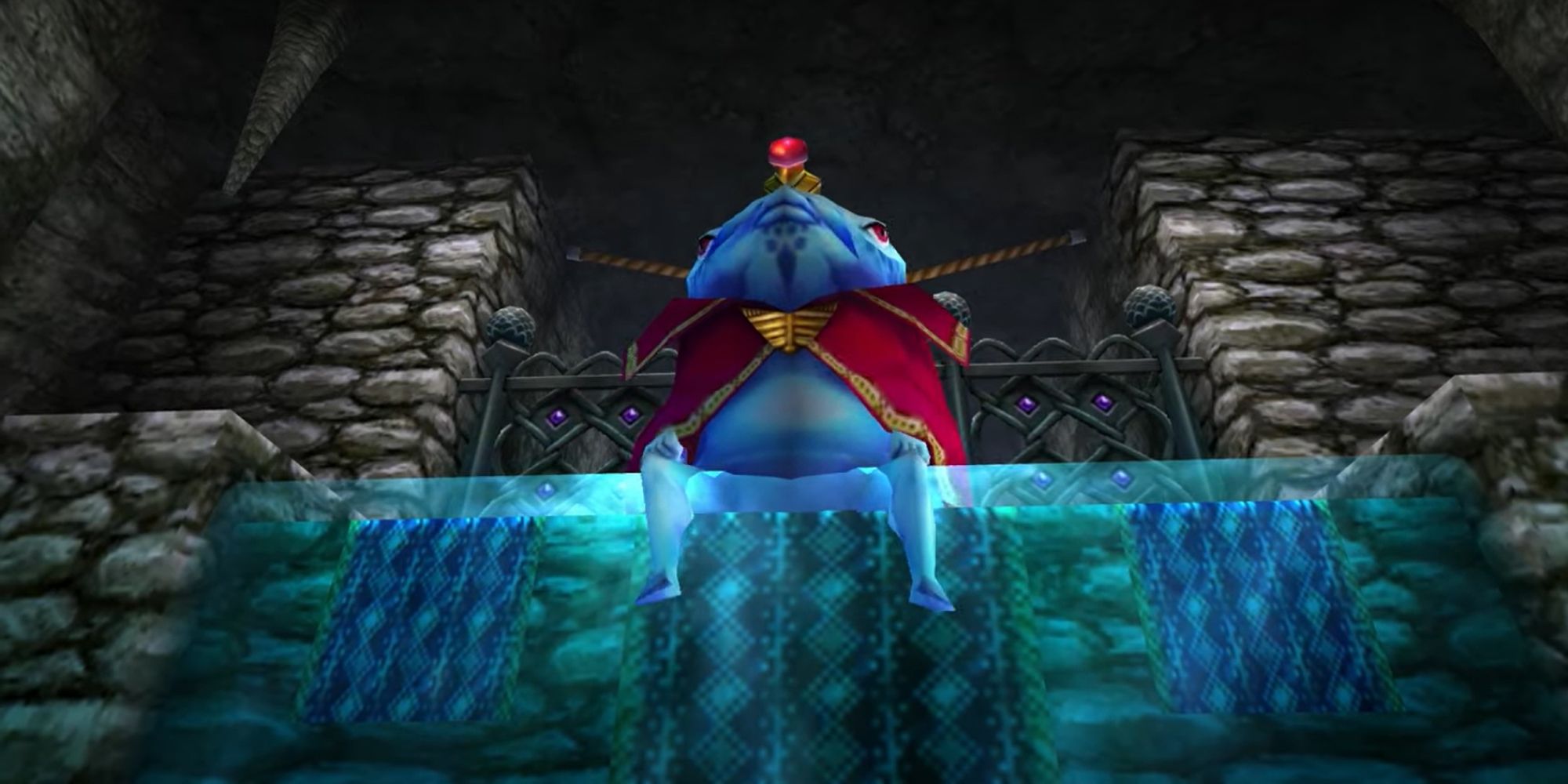 The sound of King Zora slowly scooting over on his throne to allow child Link room to access his third dungeon in Jabu Jabu's Belly is an unforgettable moment in Ocarina of Time – mostly because it is so unnecessary and, therefore, hilarious. In another version, this game scene could easily have been omitted or, at the very least, shortened considerably. But, where's the fun in that?

Instead, Link gets a full VERY awkward minute of an oversized fish slowly wiggling his way to the right. It’s silly, weird, and just aggravating enough to offer the perfect amount of comic relief in an otherwise increasingly dark storyline. 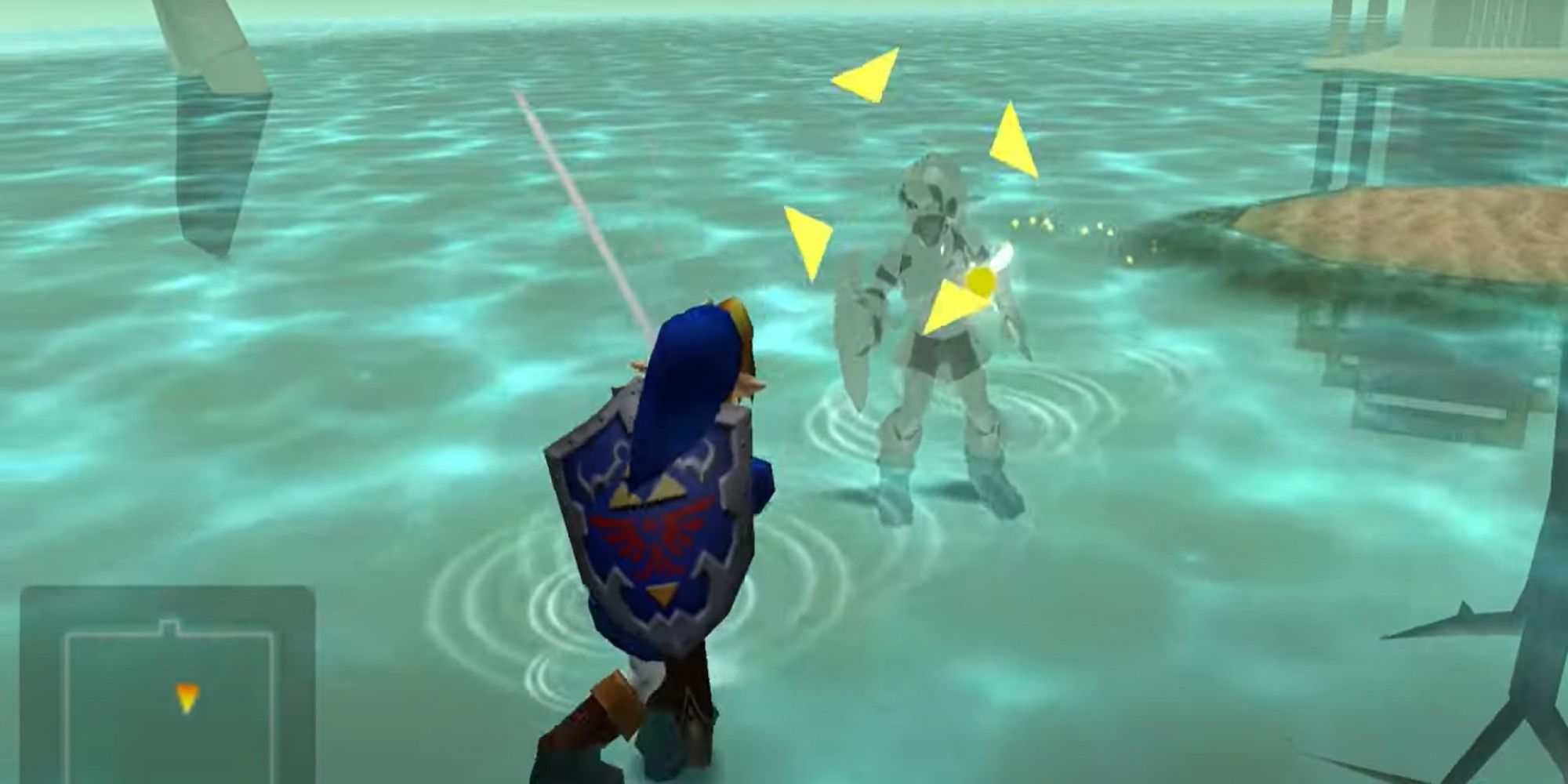 With its seemingly endless array of head-scratching puzzles and confusing rooms, the Water Temple is the most difficult dungeon you'll encounter. However, along with the sense of satisfaction you'll feel after beating the temple, this dungeon also has another redeeming moment: the epic fight against Dark Link.

This mini-boss battle stands out from the rest of Link’s villainous encounters due to its unique setting and level of difficulty. Faced with a shadow version of himself, Link must figure out a way to defeat this opponent that can do things he can't. Between the striking imagery of the fighting chamber’s shimmering horizon and the challenge of landing a hit on Dark Link, this battle is definitely one of the more disorienting moments in Ocarina of Time.

6 Leaving the Kokiri Forest (and Saria!) Behind 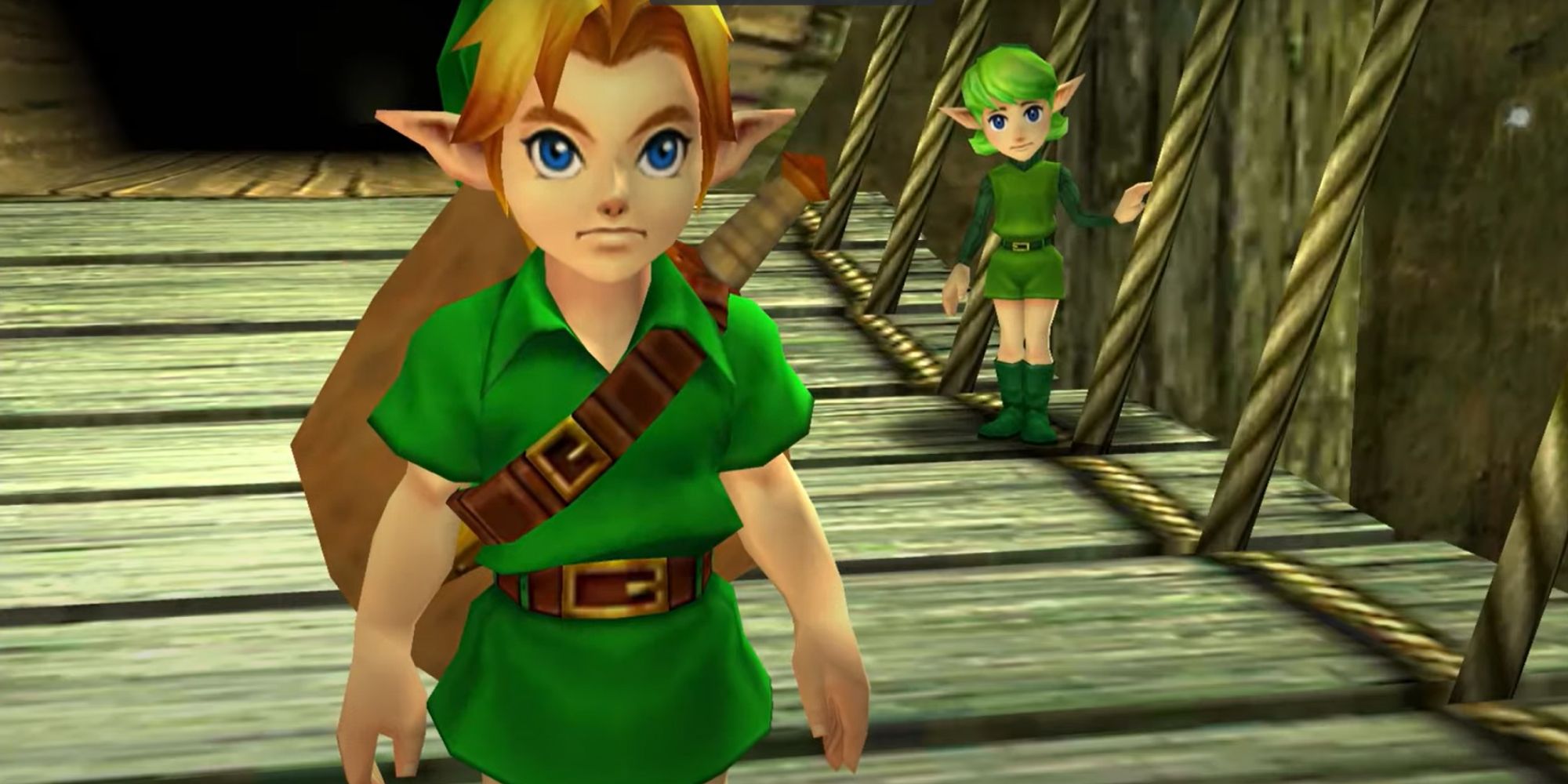 You never forget the feeling of leaving home for the first time, which is why this scene in Ocarina of Time is so memorable. As Link starts walking over the bridge that separates the Kokiri Forest – the only world he's ever known – from the rest of Hyrule, he is stopped by a familiar voice. "Oh, you're leaving," utters Saria, his never-aging, green-haired best friend from the forest.

This final conversation between the pair is not only an important milestone for the game’s storyline but also strikes an emotional nerve. Saria's gift of the Fairy Ocarina sets the stage for Link's use of music throughout the rest of his journey and symbolizes Saria's devotion to her friend. 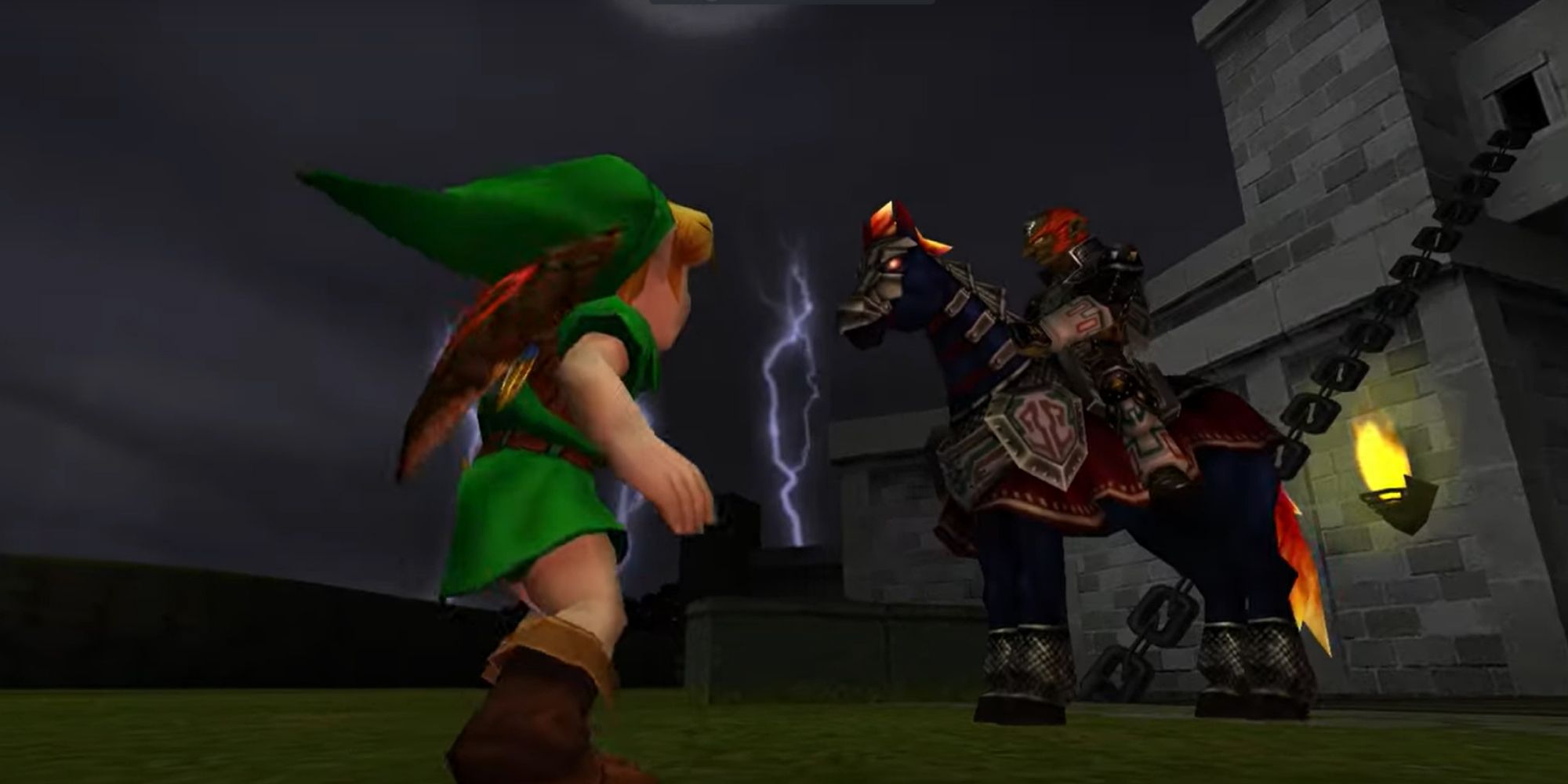 After collecting all three Spiritual Stones, child Link returns to Hyrule Castle excited to inform Princess Zelda of his triumph. However, as he moves closer to the Hyrule Castle Town entrance, something is clearly off. The sky is dark, the torches are lit, and the drawbridge is up. Suddenly, Princess Zelda and Impa come racing out of the drawbridge on a horse. With wide eyes, Zelda looks at Link and tosses an item – the Royal Family's legendary Ocarina of Time – into the castle moat.

As the princess and her caretaker speed away, Link finally sees him up close and personal for the first time: Ganondorf, a villain with superpowers that young Link can only imagine at this point in the game. This critical scene echoes Link’s nightmare and foreshadows the dark world Link will encounter after finding the Master Sword and aging seven years. Everything up to this point in the game has been mere child's play; adult Link's trials are only just beginning. 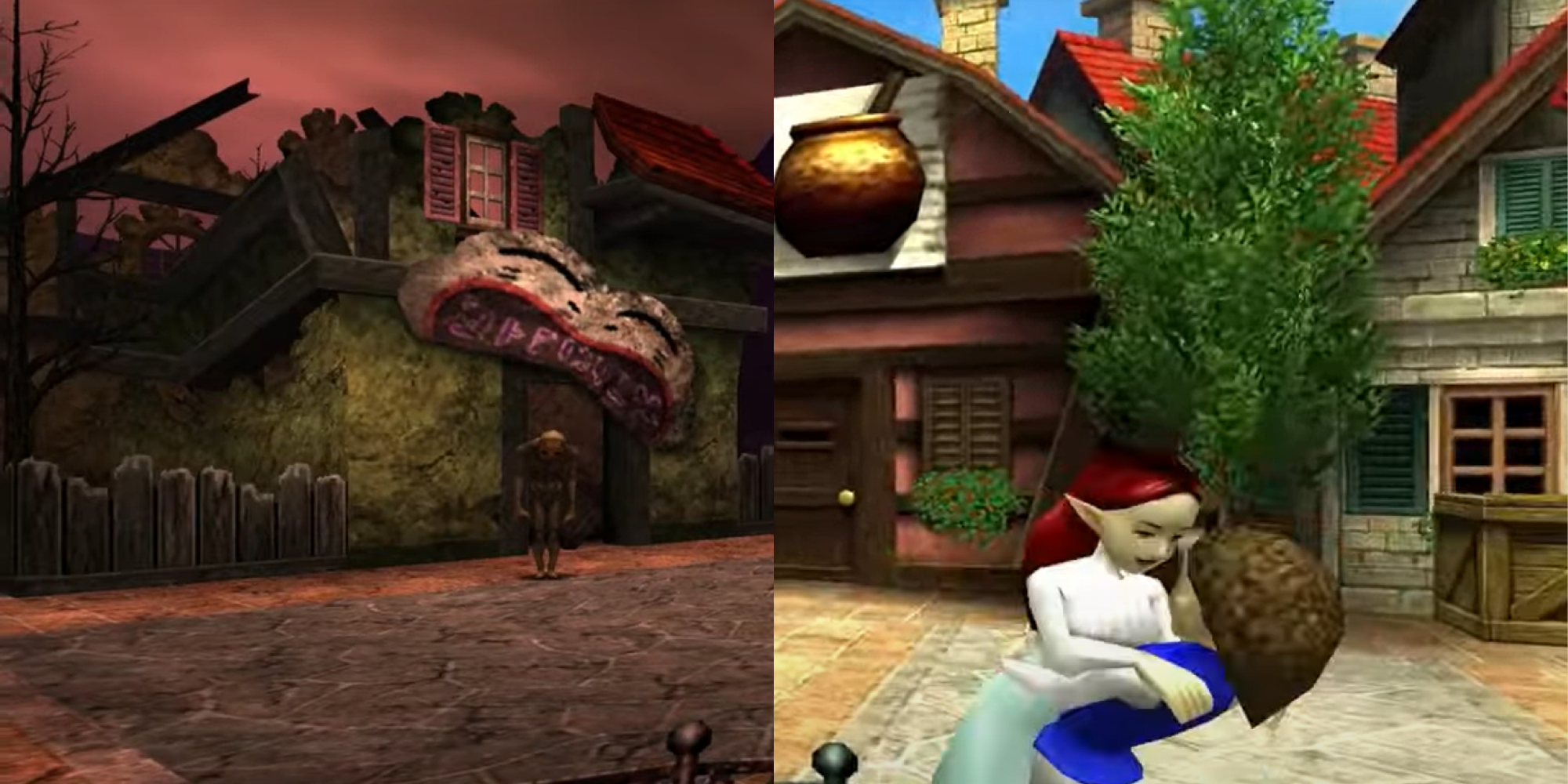 The first time Link visits Hyrule Castle in The Legend of Zelda: Ocarina of Time, the town is bustling with spirited vendors, fast-paced music, and a crowd of quirky residents. Many of the unique villagers offer Link side quests that result in life hearts or other useful items. This all fades away, though, after Link ages seven years and exits the Temple of Time into the Castle Town for the first time.

Hyrule Castle Town is now a dark, desolate place filled with nothing but shrieking zombies (ReDeads). The original residents fled to Kakariko Village and left Princess Zelda's former home a wasteland. Few other scenes in the game showcase Ganondorf's cruelty – and the dark fate awaiting Hyrule if Link fails his mission – more than this one. 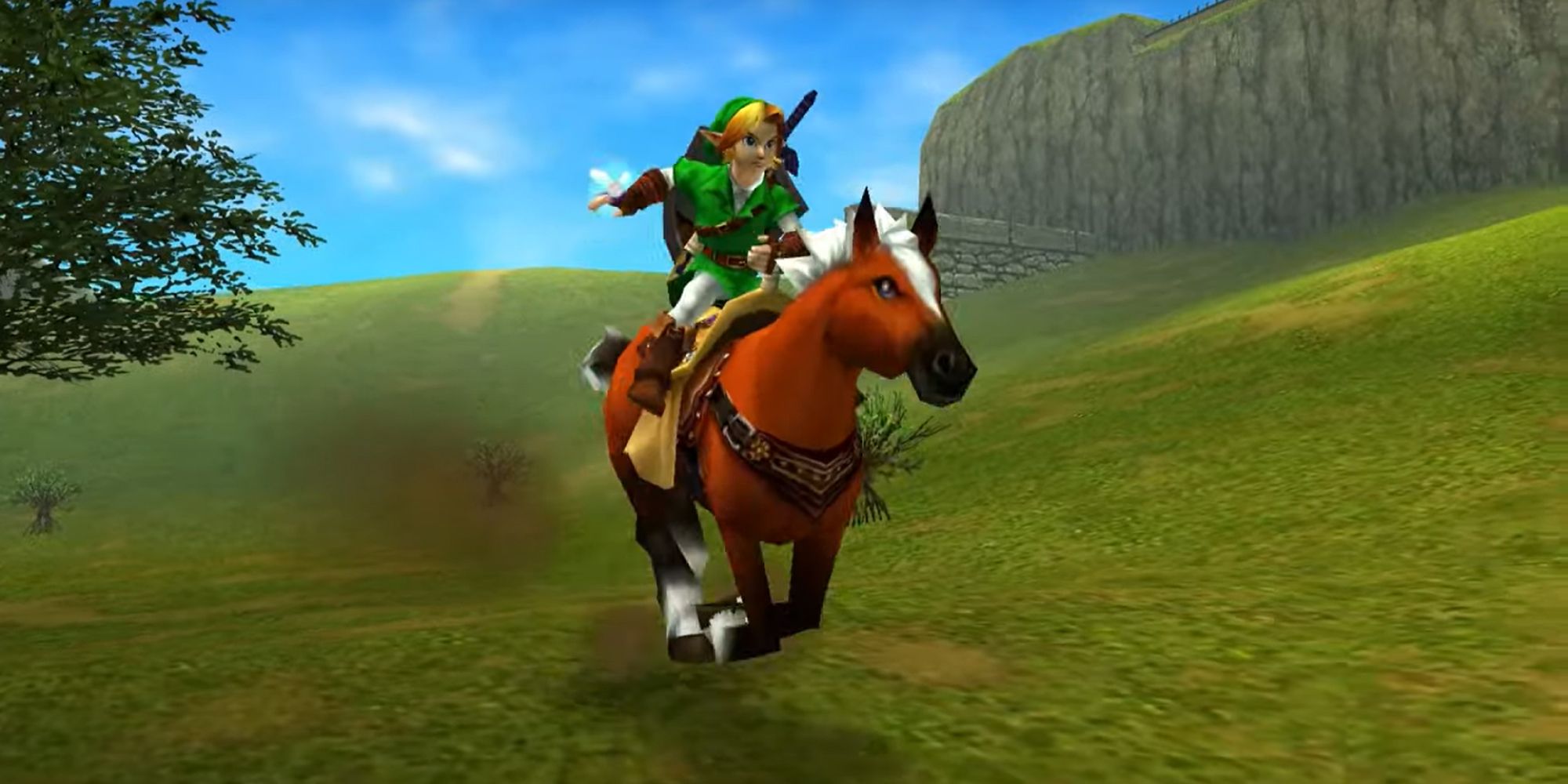 The moment Link jumps the fence of Lon Lon Ranch after winning Epona in a race is still as satisfying as beating any dungeon boss. After aging seven years, Link is challenged to a horse race by Ingo, the Ganondorf-appointed caretaker of Lon Lon Ranch. The race itself can be quite challenging, and it doesn't help that Link has to defeat Ingo twice in a row before winning his horse.

Once victorious, though, Link liberates both Epona and the ranch itself from Ingo's dastardly rule, which opens the way for red-headed Malon and her father, Talon, to take up their rightful places as owners. Riding through Hyrule Field on Epona's back gives Link freedom to travel faster and gives a beloved animal companion her rightful place in the spotlight.

2 Using the Master Sword to Grow Up 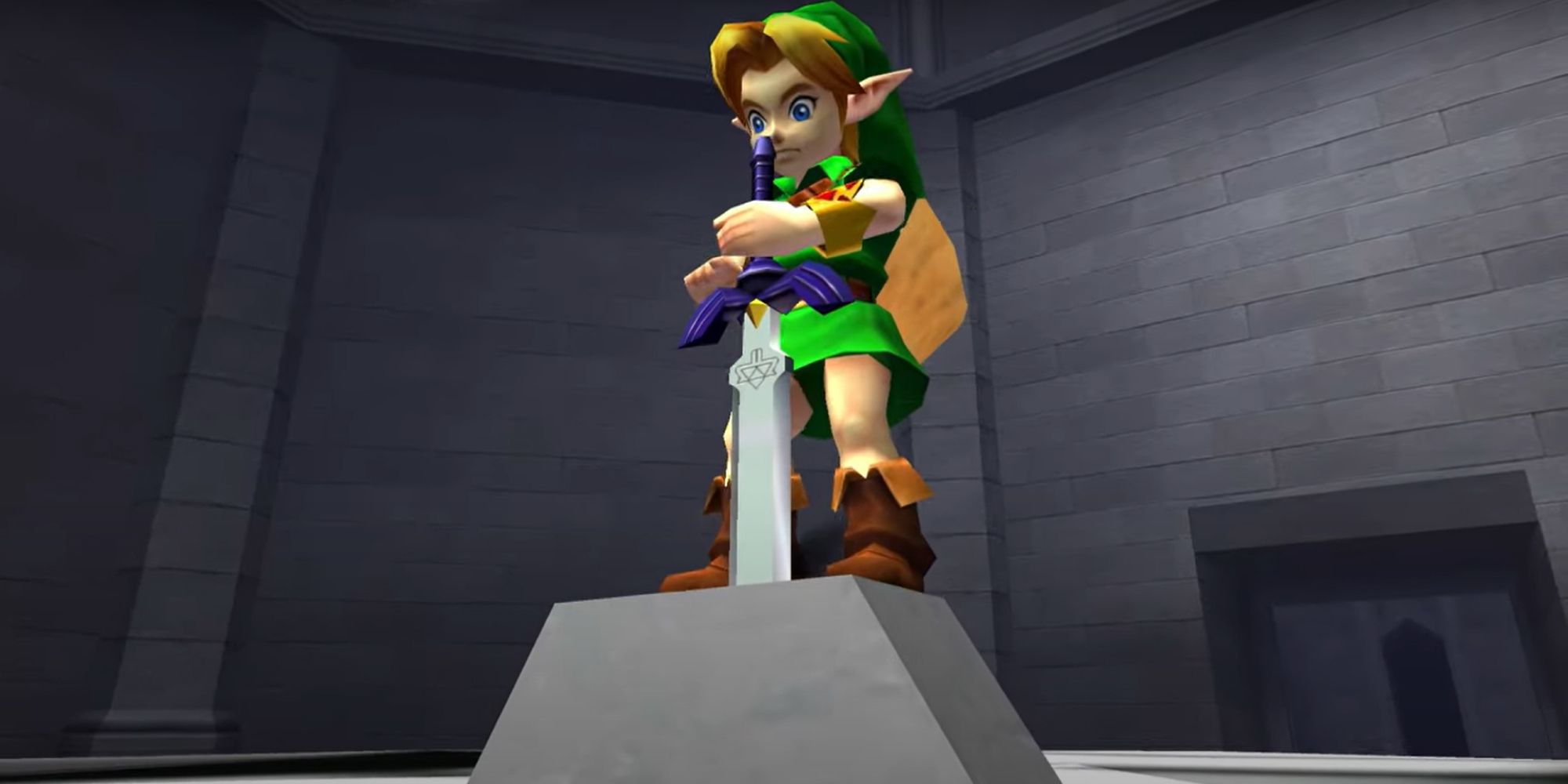 The Master Sword is an easily recognizable weapon and often shows up at some of the most pivotal moments. In Ocarina of Time, Link first encounters The Master Sword in the Temple of Time as a child. After pulling the sword from the pedestal, Link transports himself seven years into the future.

This sequence marks a fundamental shift in the Ocarina of Time narrative, a change some players argue is when the “real” game begins. In some ways, it isn't hard to see how Link's adventures retrieving the three Spiritual Stones represented a sort of extended prologue up to this point in the game. Regardless, Link's look of shock after registering his sudden aging – and realizing that seven years of his life have just been effectively erased – is an iconic moment in the Ocarina of Time and The Legend of Zelda series as a whole. 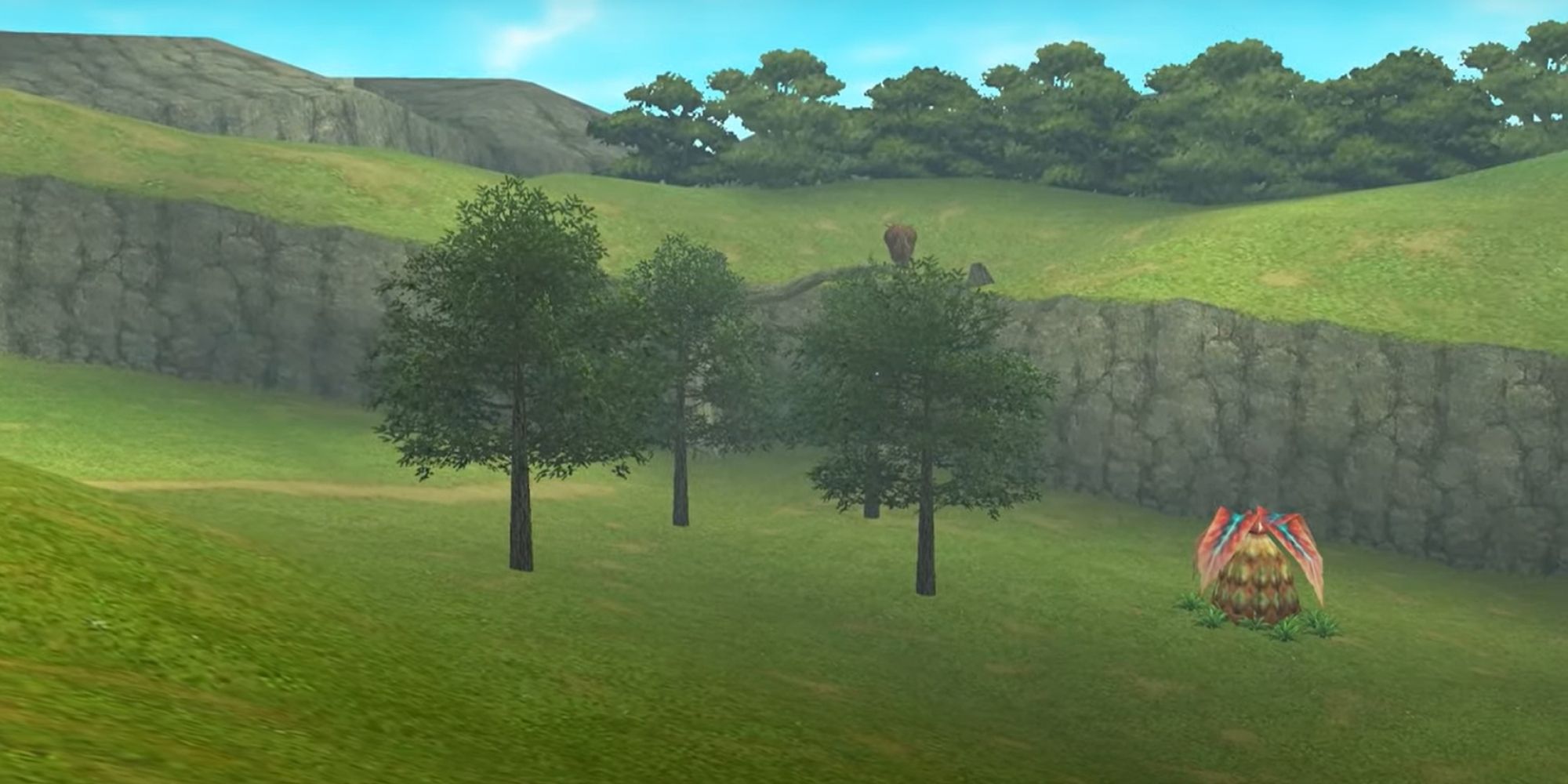 Beyond all other moments in the game, the first time Link steps onto Hyrule Field from the shadows of Kokiri Forest marked a life-changing moment for both the character and the gaming community. Staring out at the vast horizon of Hyrule foreshadows locations important to the game's narrative arc, including Death Mountain, Lon Lon Ranch, Hyrule Castle, King Zora's Domain, and Lake Hylia.

This moment beyond all others evokes a feeling of pure excitement; a moment meant for cracking your knuckles, settling in, and gearing up for the epic adventure that awaits you. When it comes to replaying the Ocarina of Time over (and over) again, it's surprising how that feeling never really goes away.