As fans will know, Destiny 2: Beyond Light has been live for just over a month. With it came a new Raid, a brand new set of abilities powered by the Darkness, and memes. As with every annual reset, the community has been quick to break down what is great and not-so-great about the new expansion.

Most players agree that Stasis (the new set of elemental abilities discovered on the mysterious planet of Europa) is a welcome innovation to Destiny’s gameplay. But it is also unbalanced in PvP gametypes. Those that pay attention to the story agree that Clovis Bray I is just as much of a pain as the game’s previous lore had suggested. Most importantly, though, some of the new content is ripe for analyzing, discussing, and disseminating in meme form (there are hidden secrets aplenty in Beyond Light). 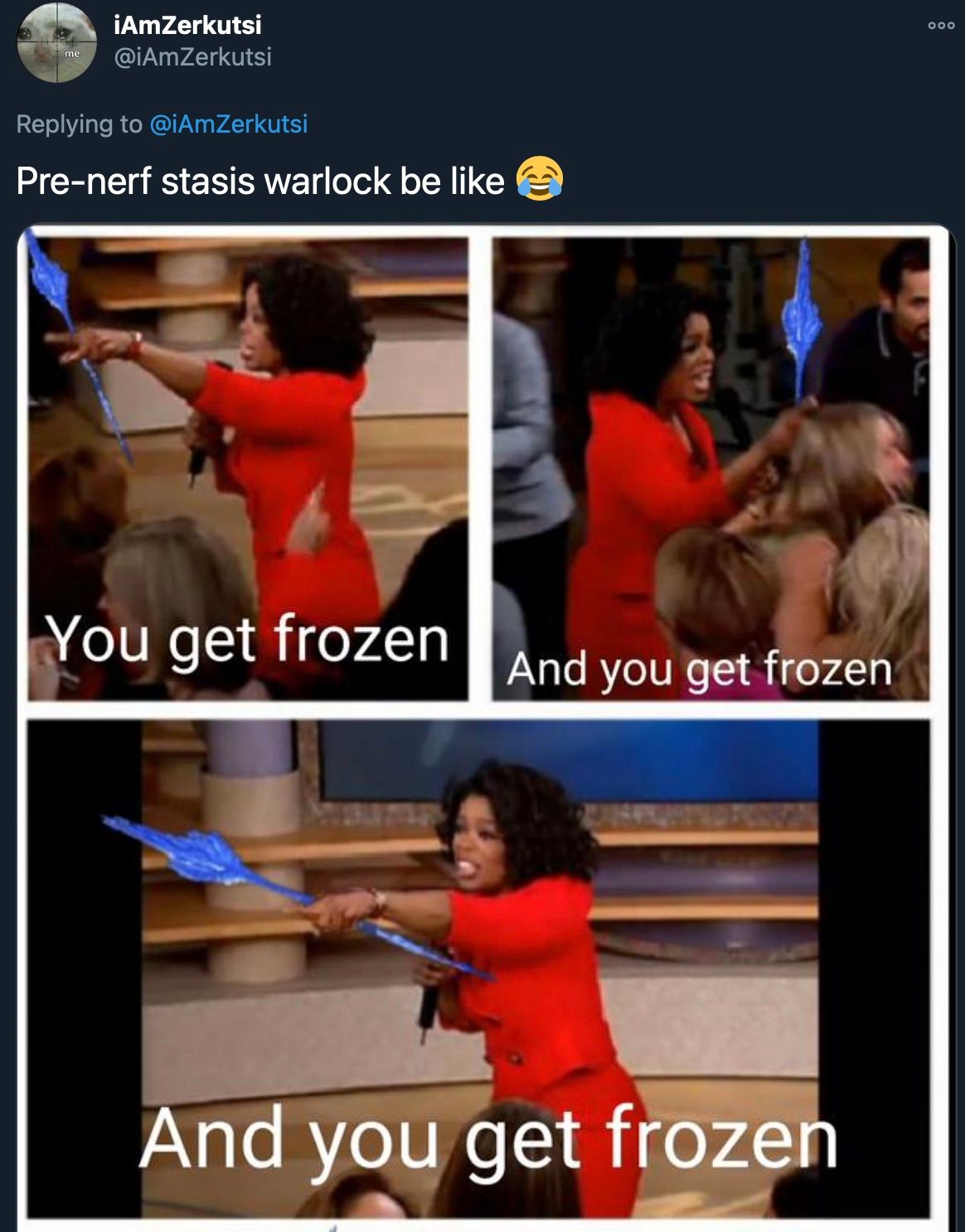 Warlocks running the Stasis subclass called Shadebinder had a wild first two weeks of the Crucible’s new season. Before Bungie patched the subclass for all Guardians, Shadebinder was the most effective Stasis class to run in PVP (powerful builds will be needed for some of the tougher Raids, too).

Abilities like Penumbral Blast and the Coldsnap Grenade freeze enemies in place and have aggressive tracking capability. Some of these abilities also chained to multiple enemies, meaning a single Warlock could take out an entire team with just one charge each of grenade and melee abilities. So yes: as this meme from a Twitter user suggests, everybody gets frozen. If you’re a pro player, you can do some truly devastating damage with Statis. 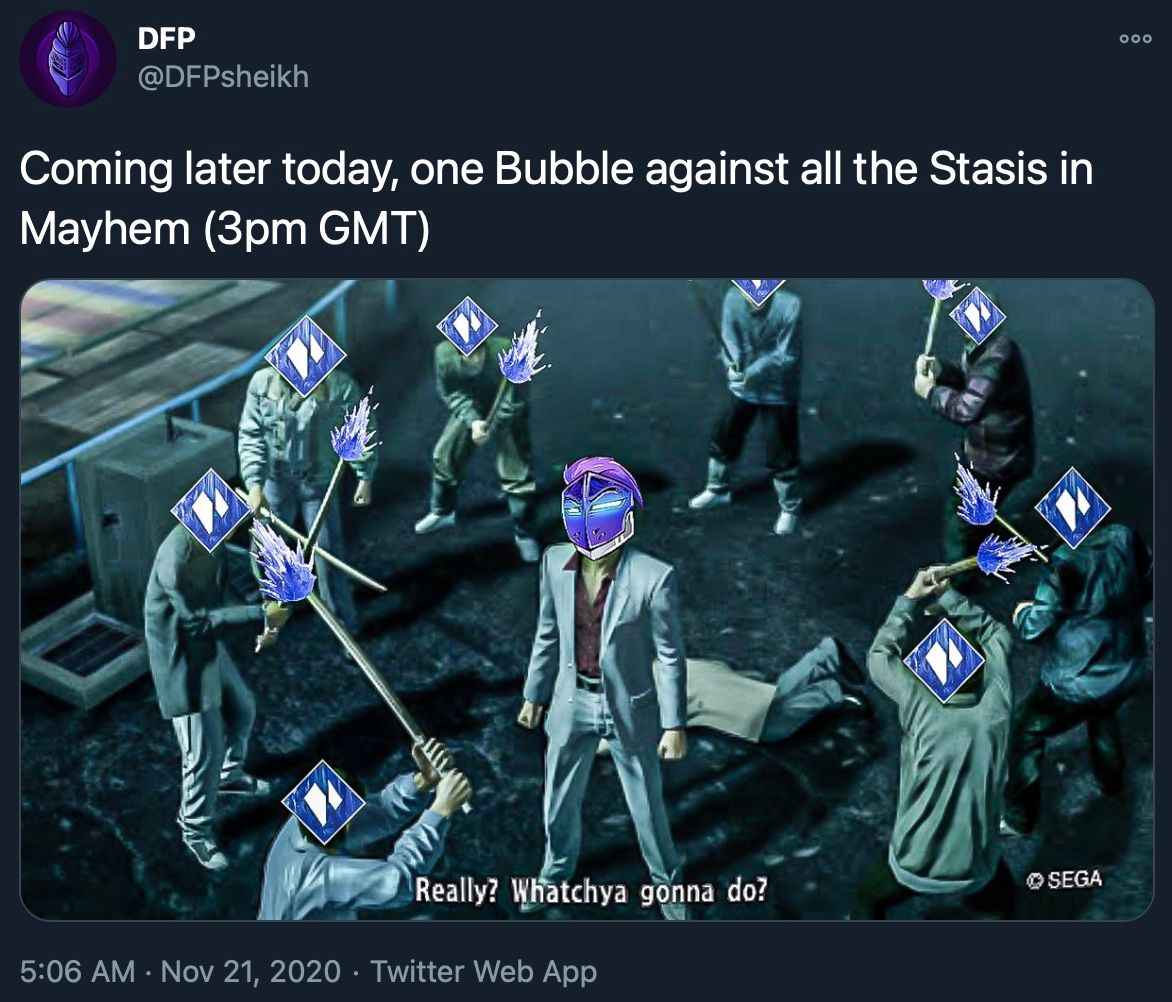 With Stasis abilities dominating the PVP space, Destiny 2 players are looking forward to any excuse to pull out their other loadouts. Thankfully, Mayhem gives Titan players just that. Mayhem is a Crucible gametype in which Grenades, Melee abilities, and Super abilities recharge at an accelerated rate. The Titan’s Ward of Dawn Super (aka bubble) has proven to an effective defense against Stasis abilities too.

After two weeks of unbalanced carnage, this Twitter meme illustrates the pure catharsis Titans hope to experience upon dropping into Mayhem. It’s a completely different experience from the base game.

8 Clovis Bray I Can Handle This Himself 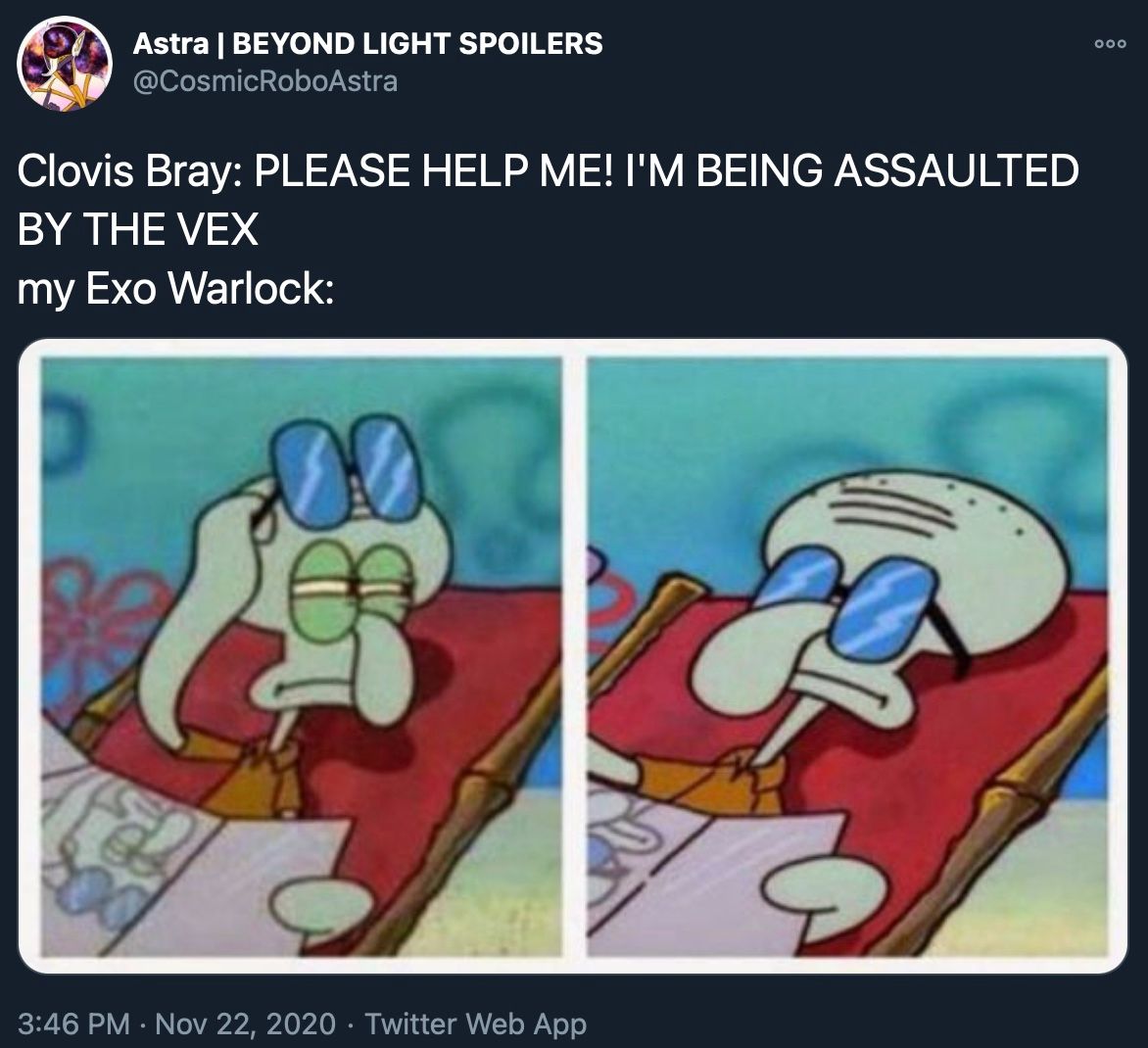 The story of Clovis Bray, the legendary megalomaniac famous for creating the Exos, is front and center in Beyond Light. Father of the Stranger, Elsie Bray, Clovis Bray I stole technology from the Vex to complete his work with the Exos, enabling him to immortalize himself and his offspring. Of course, this transgression of the Vex does not go unpunished.

Without spoiling anything (much of Clovis Bray’s story ties with Beyond Light’s Raid), Bray seeks out the Guardians for assistance. But considering Bray’s villainous past (especially towards Exos), it makes sense for an Exo player to turn a blind eye to his cries for help, as per this meme from Twitter. 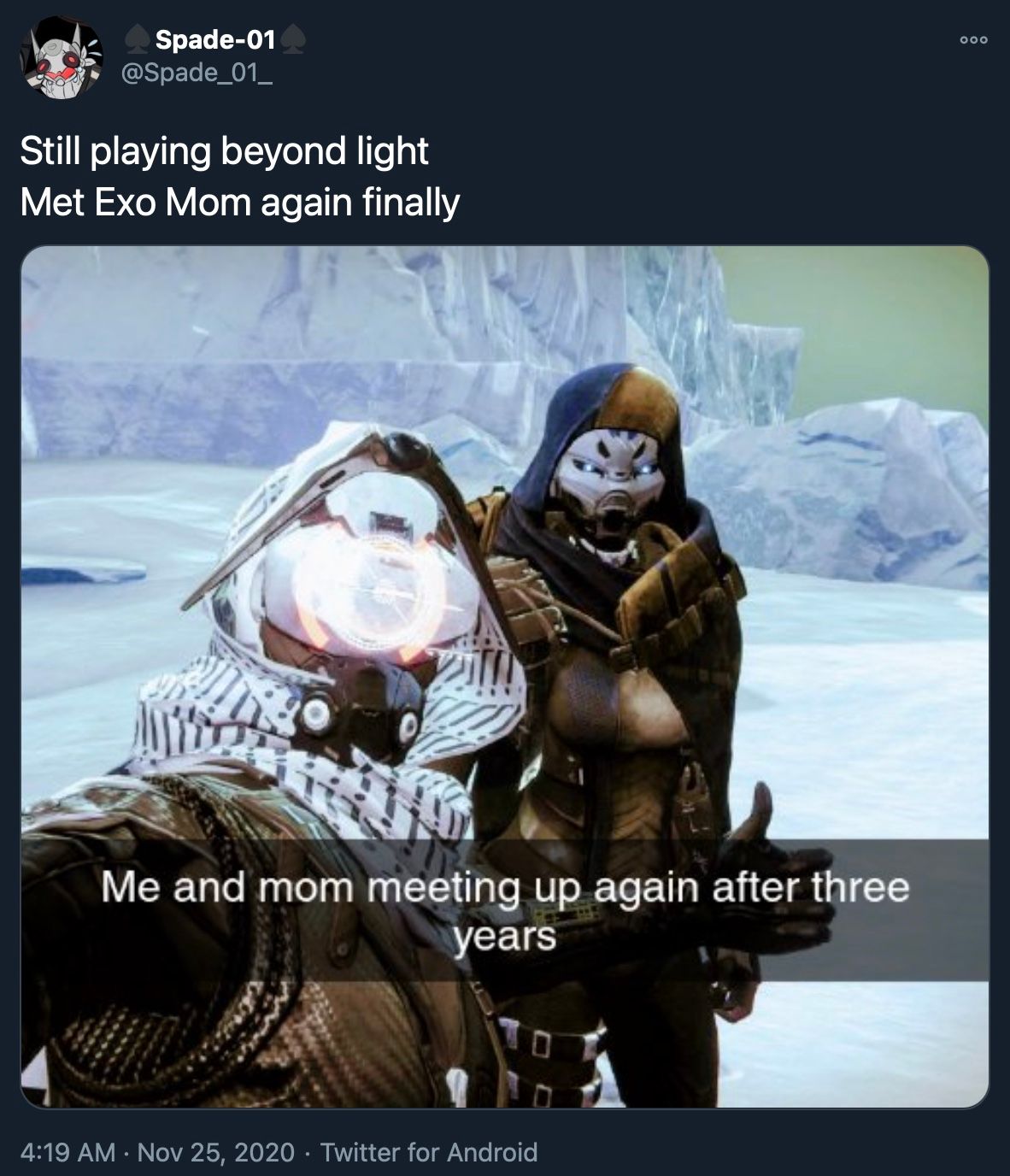 After that, she and the Darkness were never seen or heard from until this year’s expansion, seven years later. With such a long, mysterious absence, players are excited to see the infamous Exo return, enough to share a selfie moment with her in this Twitter meme. 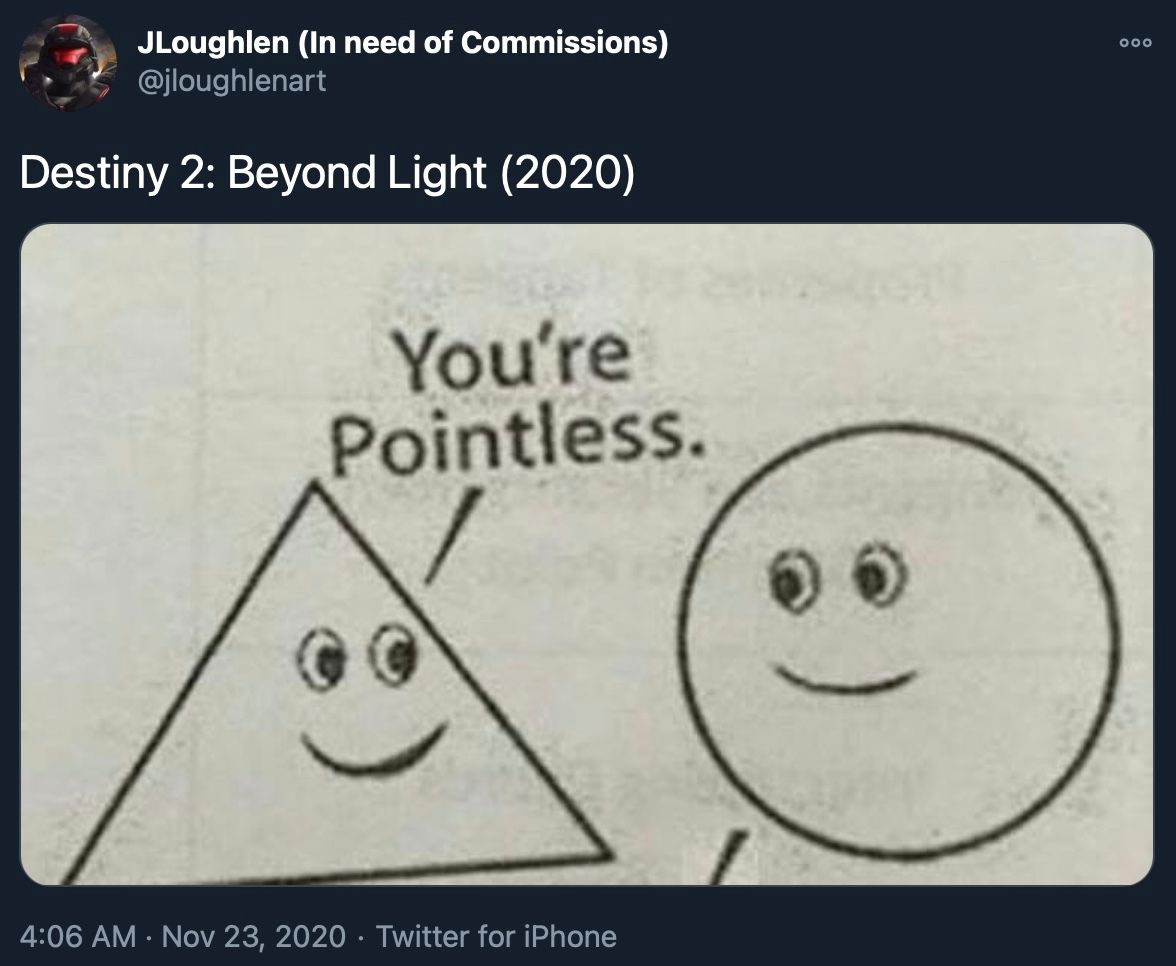 Before now, little was known about the Darkness, besides the fact that it and the Traveler (a glowing orb from which Guardians receive their power, known as Light) waged war centuries before the events of Destiny 2. But since last year’s expansion, a mysterious pyramid has taken refuge in the Solar System, inciting the events of Shadowkeep.

With Beyond Light, players learned that this strange apparatus is called the Ziggurat, a harbinger of the Darkness. The Ziggurat gives Guardians the ability to harness the Darkness as a new subclass called Stasis, which has proven to be more powerful than Light, especially in Crucible matches. So yes, this would mean the Traveler is quite…pointless. Good tweet. 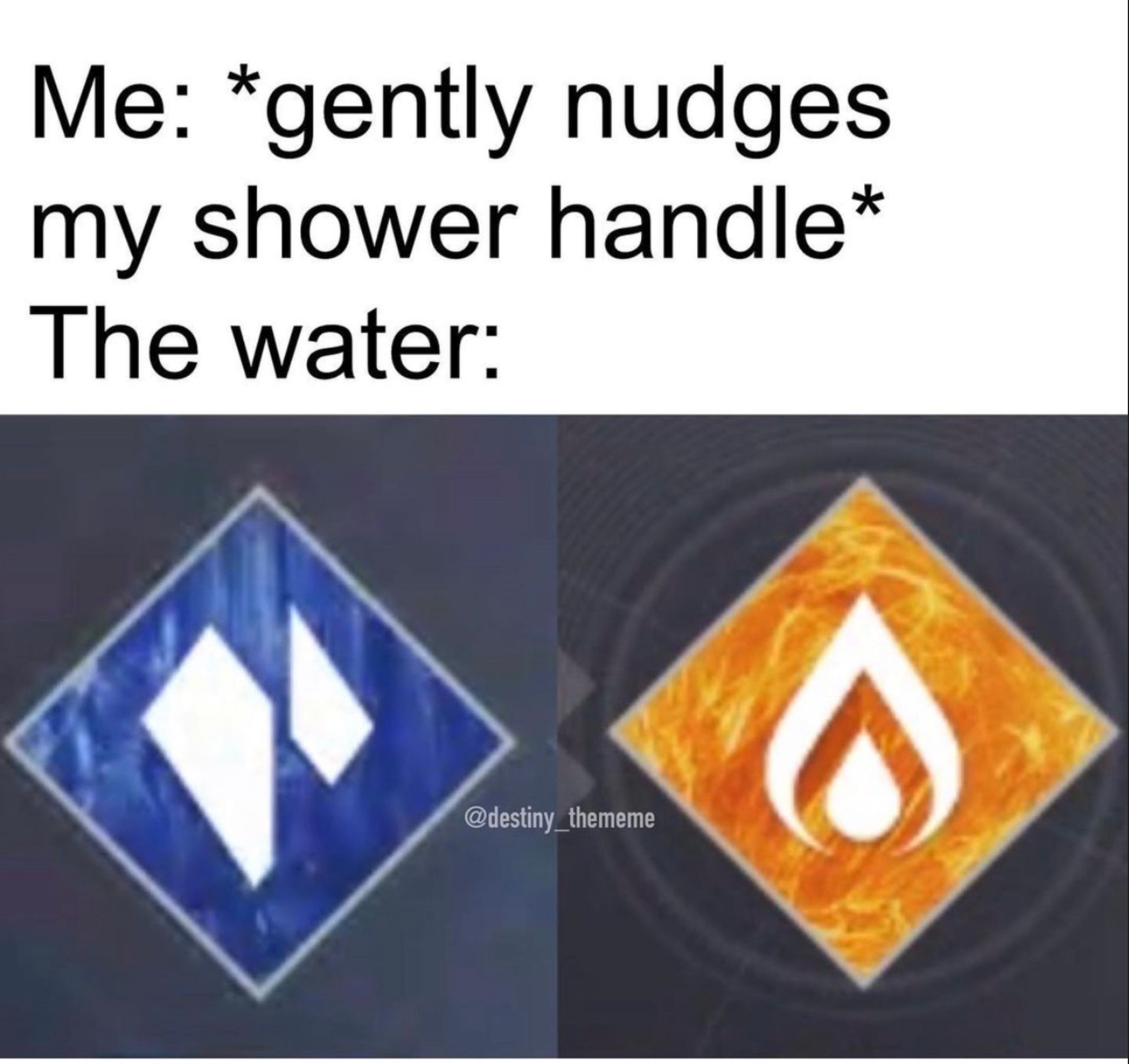 Stasis is the big selling point of Destiny 2: Beyond Light. Besides the lure of its mysterious ties to the Darkness, the new element allows players to freeze enemies with various new Guardian abilities and subclasses (allowing for dozens of great new builds for players to try). Arguably the most dynamic addition is a grenade that conjures a wall of ice, which serves as cover, a platform, or an extra boost in a Guardian’s jump.

Also, as pointed out by this Instagram account, Stasis offers a thematic counter to Solar, a subclass that dates back to the original Destiny. The Solar subclass features fiery abilities like the explosive Golden Gun, Titans’ flaming war axes, and all things hot and steamy — just how everybody likes their morning cleansing rituals. 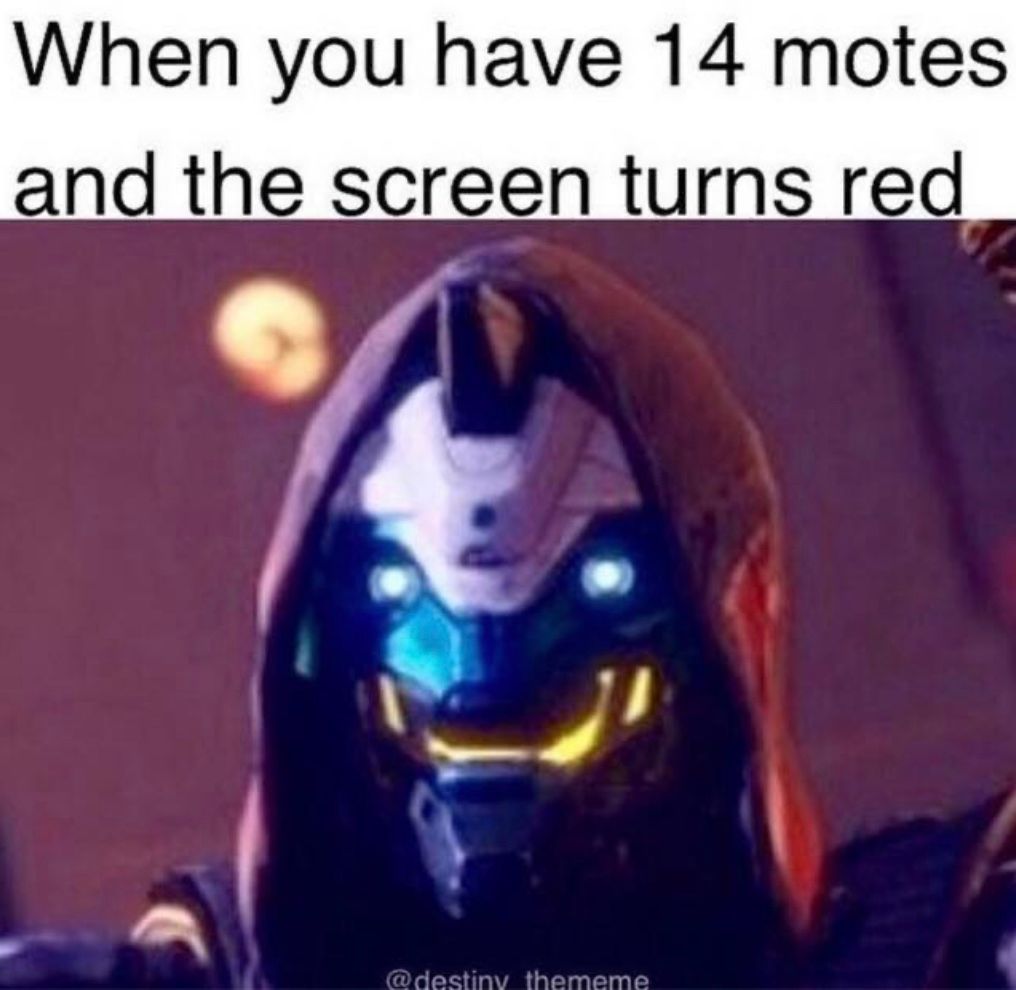 In the gametype Gambit, two teams of Guardians must eliminate enemies, collect the glowing motes they drop, then deposit those motes into a banking station for points. Depositing motes also summons a monster to attack the opposing team. The more motes you deposit, the larger the monster (Taniks, The Abomination being about as big as it gets in this series).

The catch, of course, is if you die, all the motes you were carrying disappear. This risk-reward structure makes for many tense situations wherein a player will have 15 motes (the max) and must race to get them deposited before getting sniped by a pesky Vandal. Worse — far worse — would be carrying 15 motes right when those Destiny 2 servers crash. This classic meme holds as true in Beyond Light as it ever has.

3 The Pain Of Golden Gun 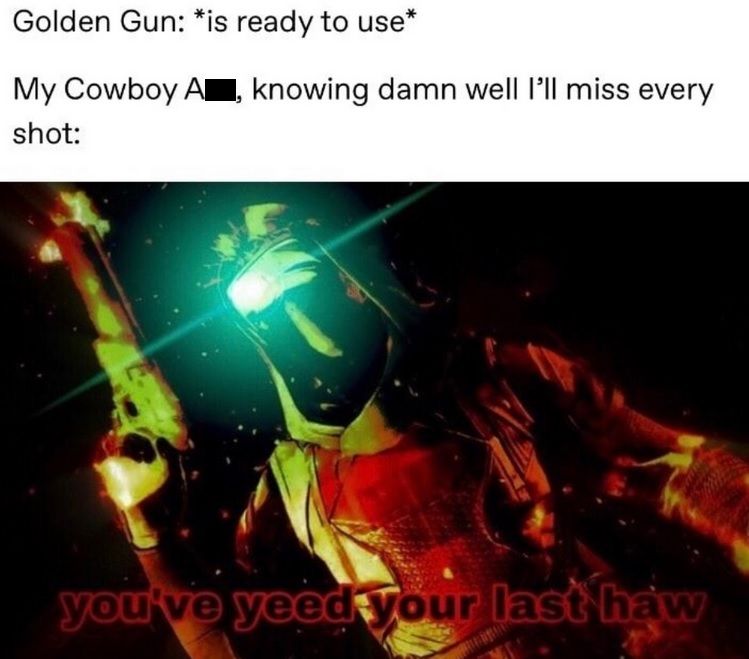 While most Supers require little precision to execute, the Golden Gun ability gives Hunters around three instant-kill shots in an ethereal, blazing Hand Cannon. It’s a powerful weapon to wield in Crucible, but since it handles just like a standard Hand Cannon, it takes skill, a steady hand, and a level head to use.

If a Guardian loses their cool, they could very well find themselves unloading all three precious rounds into thin air, wasting a hard-earned Super. It’s a pain likely every Hunter has had to endure dozens of times over the years, as this meme illustrates. 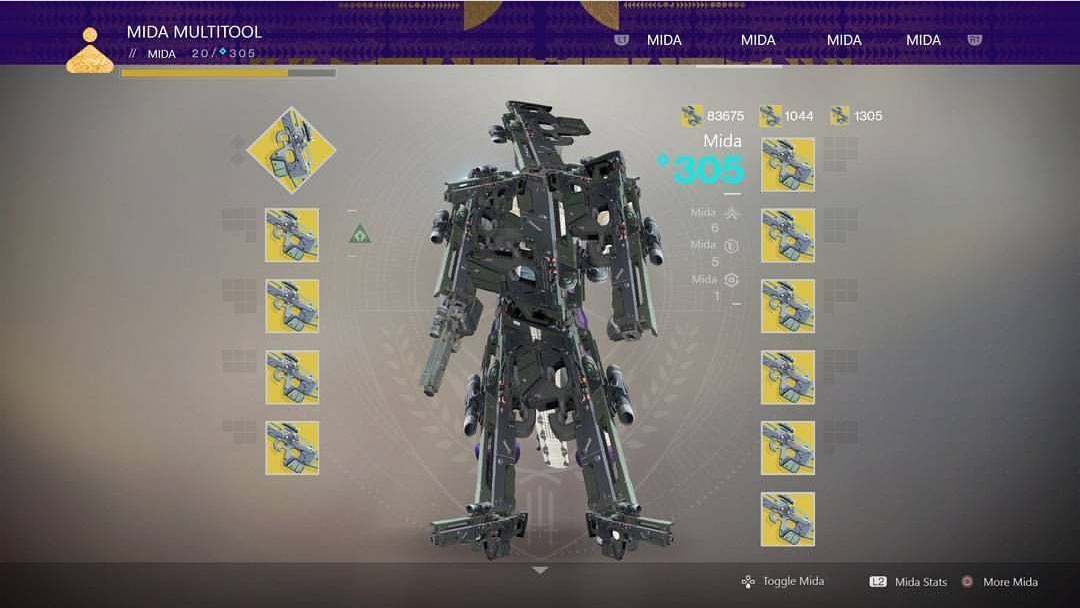 MIDA Multi-Tool was an infamously overpowered Scout Rifle that first appeared in Destiny. When it made its Destiny 2 debut in 2019, this gun quickly became essential for every class of Guardian.

With a boost to player speed and a radar that stayed enabled while aiming down sites, MIDA Multi-Tool was especially powerful in Crucible — so much so that it was all but essential even to enter any PvP mode. Though Bungie eventually nerfed it, MIDA will always stand as a monument to Destiny’s troubled history of unbalanced Exotic weapons, as immortalized by this Tumblr meme. 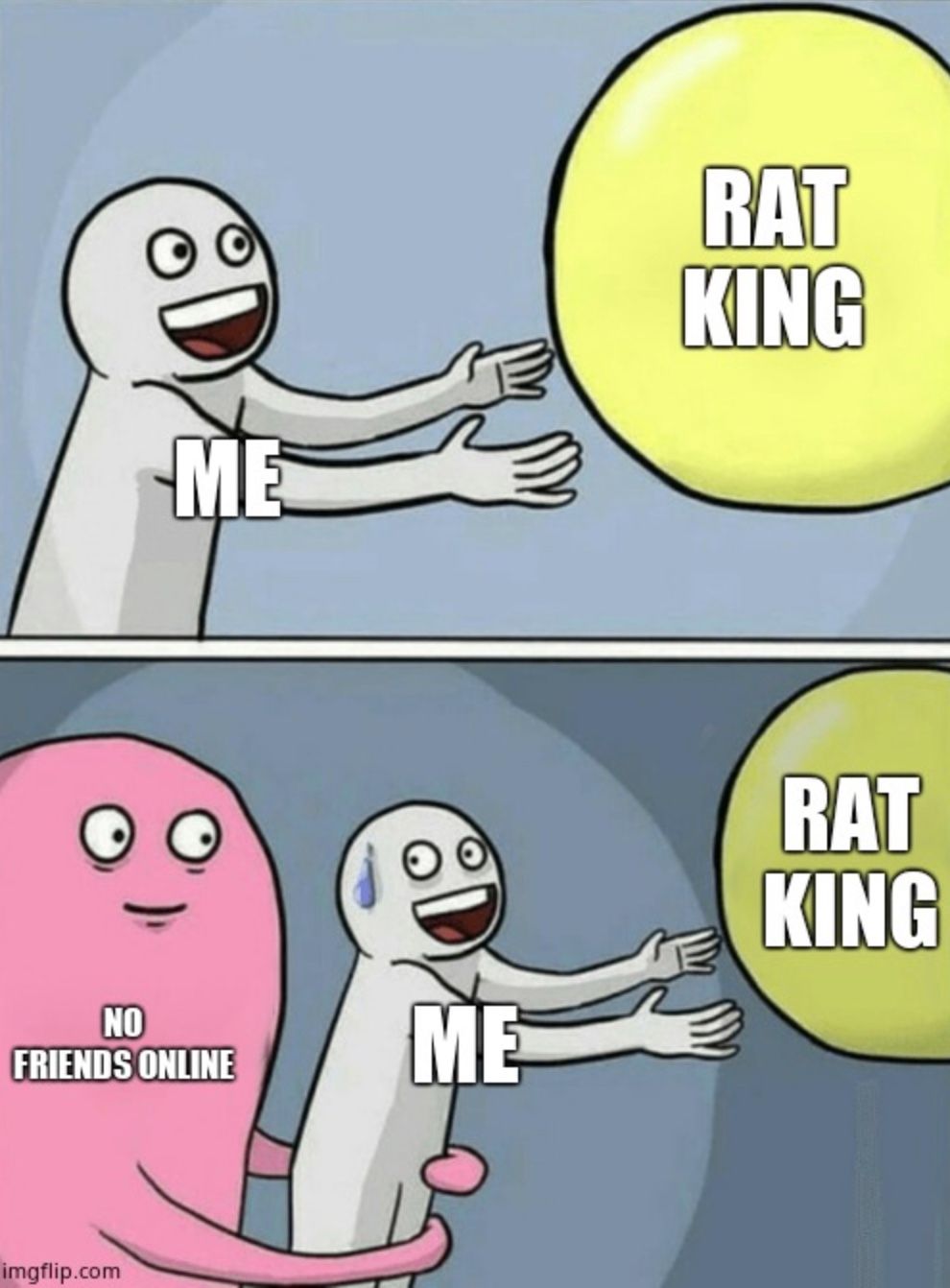 If two or more Guardians had Rat King equipped, it would become more powerful, stackable up to six times! Because of this, Rat King was a perfect highlight of what is excellent — and not so great — about Destiny. If you have friends online, it’s a great experience. Otherwise, as this meme suggests, it can be an empty waste of time. 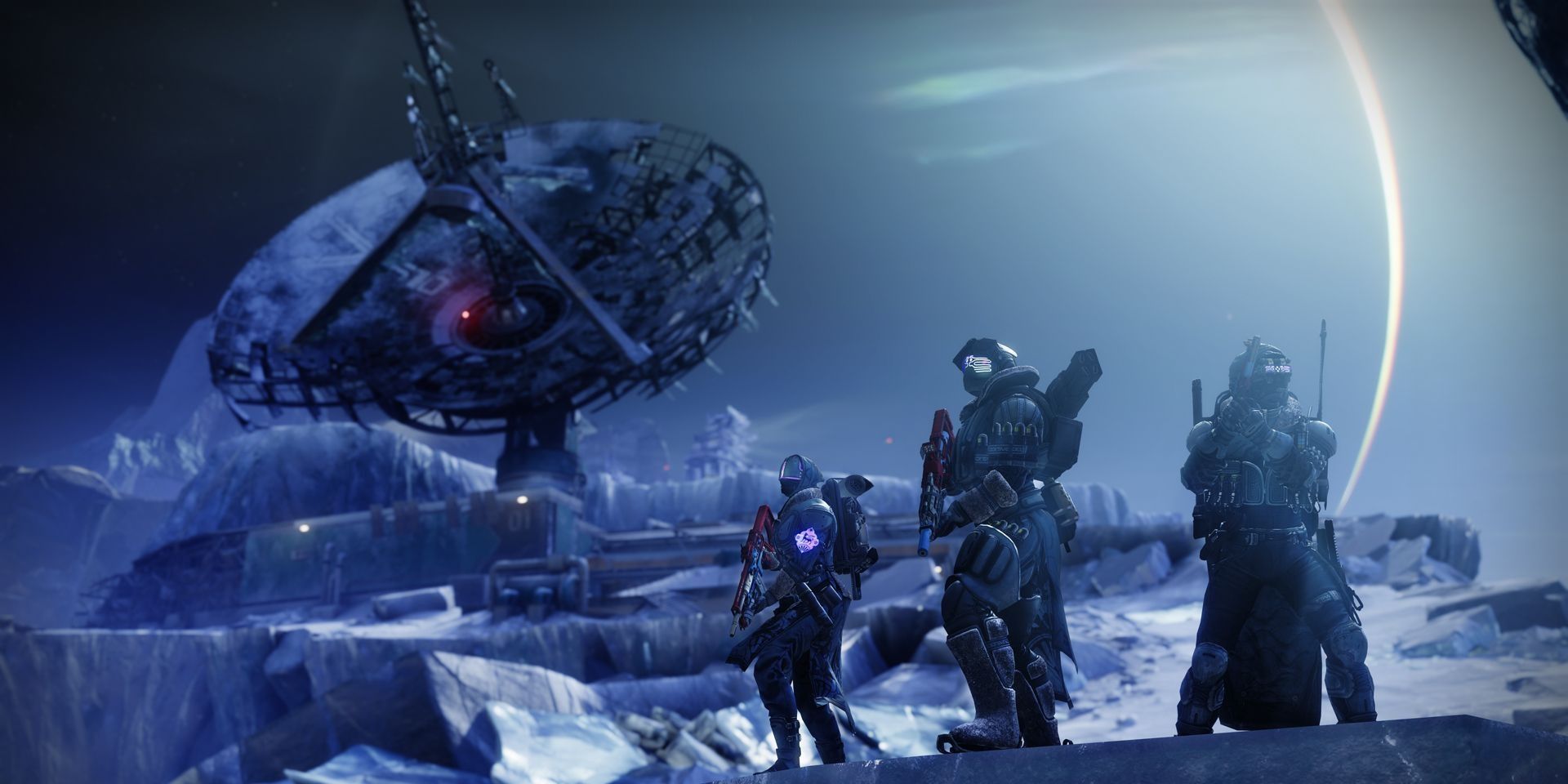 Joe is a freelance writer based in Queens, New York. He has written and edited for Apple platforms, as well as publications like Gaming Trend, CGMagazine, and GameSkinny. When he isn’t writing lists for The Gamer or interviewing composers for his podcast, Gemu Bebop, he can be found cropping images manually instead of just memorizing the pixel count like a reasonable human.