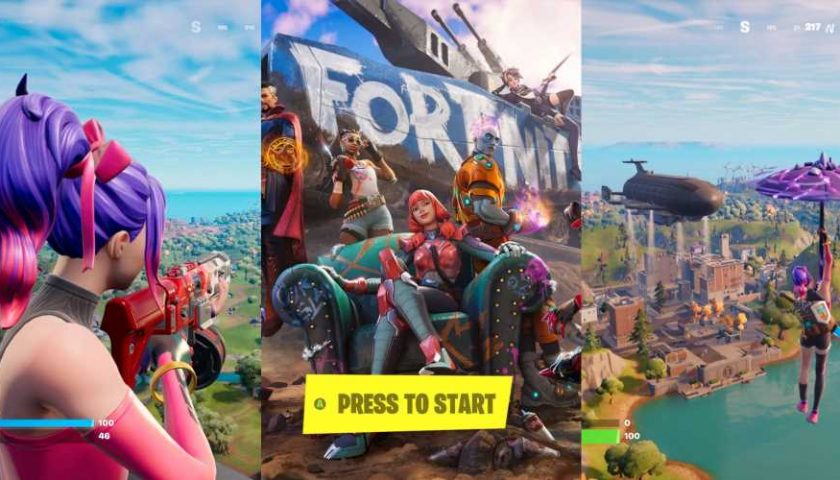 It's pretty incredible to think that Epic Games have been releasing brand new seasons and content for Fortnite for years now. Each new season brings fresh gameplay changes, map updates, new weapons, and a host of other stuff for fans of the game to sink their teeth into. While not every season is a guaranteed winner, looking at you Chapter 2 Season 1, the majority of new seasons are chock full of surprises.

Chapter 3 Season 2 might just be one of the most game-changing yet. From sweeping gameplay shifts to a whole storyline that dictates how the map is broken up, this new season almost reinvents the wheel when it comes to the uber-popular battle royale. This new season, titled "Resistance," pits the IO (Imagined Order) against The Seven. Here are some of the biggest changes to the game in Chapter 3 Season 2.

10 Building Has Been Removed…At Least For Now 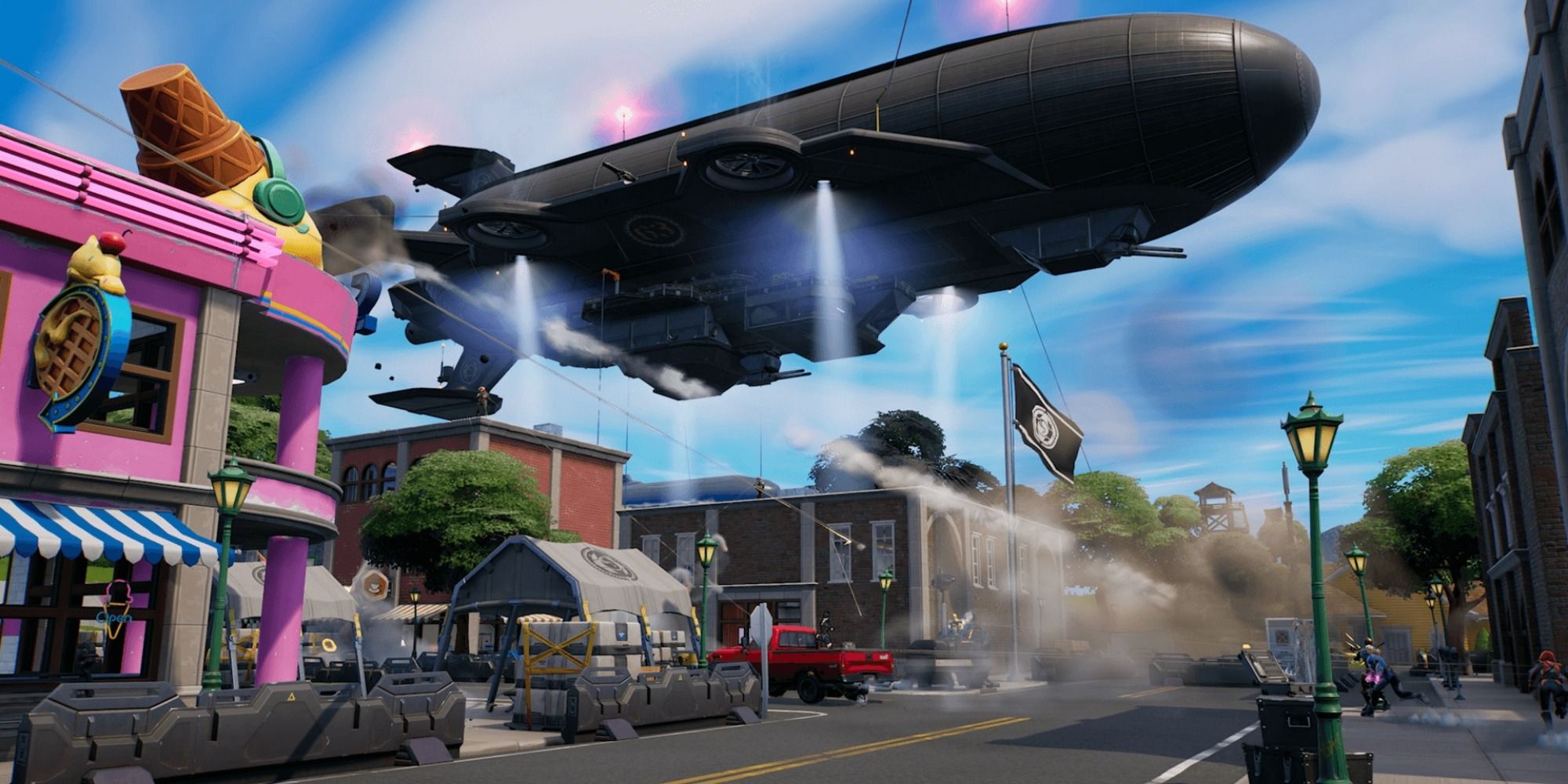 Fortnite, at least for the most part, has typically been known for its unique spin on the battle royale genre with a heavy emphasis on building. Love it or despise it, in order to do well in most matches, you would have to at least have some knowledge of the building mechanics in the game.

In a bold and interesting turn of events, Fortnite Chapter 3 Season 2 has completely removed building, at least for the foreseeable future. Epic Games tied this change into the new season's storyline whereby the Imagined Order built a special device to remove builds. Perhaps a bevy of new players will try their hand at the game to see if they are hooked by its movement and shooting mechanics alone. 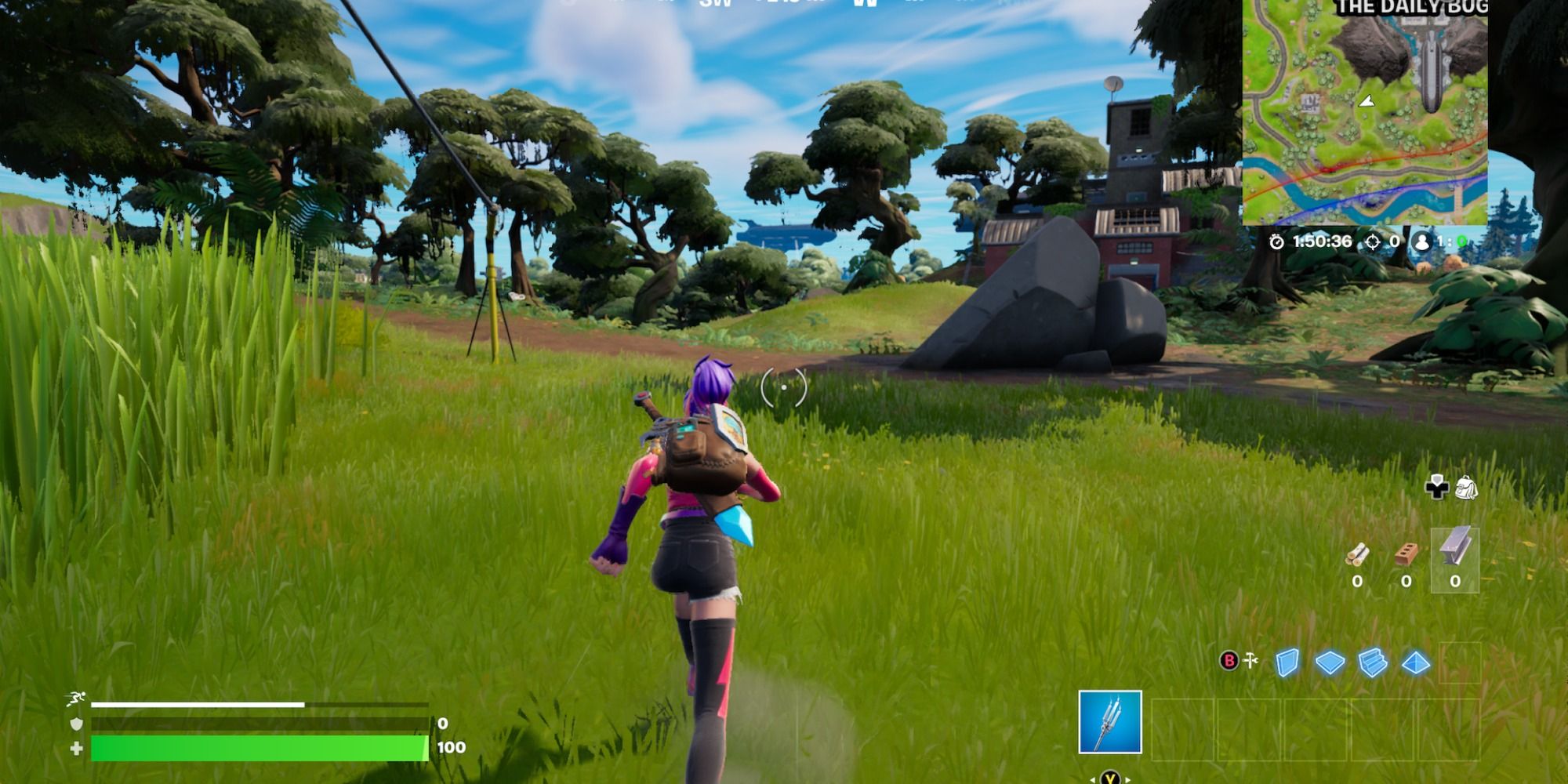 Mobility is a key component to almost any battle royale game. In order to survive through matches, being able to move quickly, efficiently, and with purpose are all vital aspects to keep in mind. While Fortnite has generally been a fast-paced battle royale with multiple traversal options, Chapter 3 Season 2 has completely upped the ante.

Due to the removal of building, players needed a new way to evade the storm and other players since they can no longer crank 90s to hide from the bullet damage. Tactical sprinting and mantling have now been added to keep you moving forward when necessary. You can now sprint at quicker speeds, albeit, with your weapons unequipping in the process. You are now also able to mantle over objects while also climbing over certain walls, doorways, and buildings. 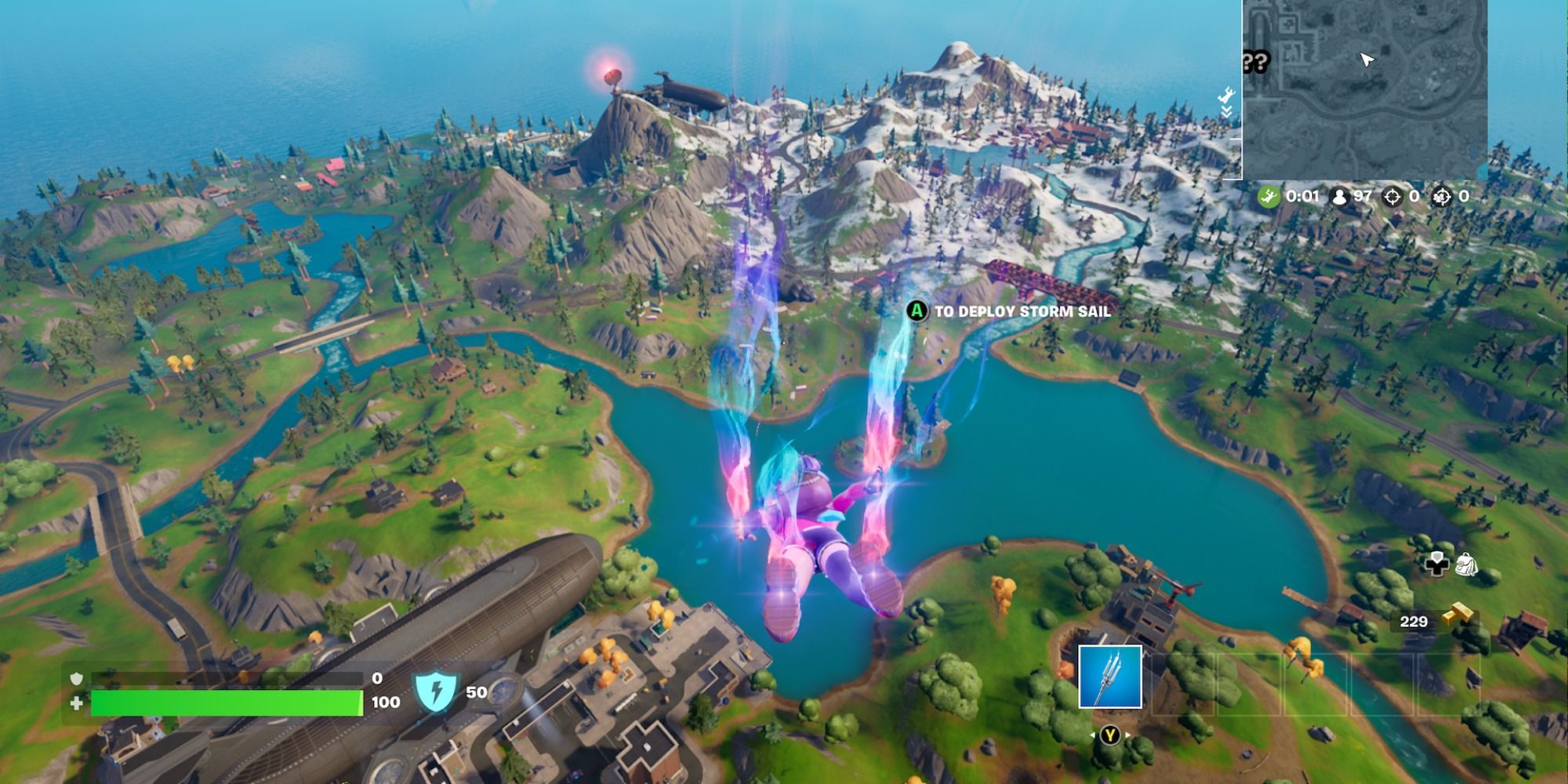 One new gameplay aspect that will surely change up the battle royale's meta is that of the overshield. Instead of the traditional one hundred health and one hundred shields you could have in previous seasons, you now have an overshield that progressively recharges up to fifty extra shield points.

As you can imagine, this small change completely augments how battles will take place since the time to kill has now been extended. The overshield will be your first line of defense and will crack and break as the original shields had before. Once that happens, it's vital to escape a battle to have it recharge. 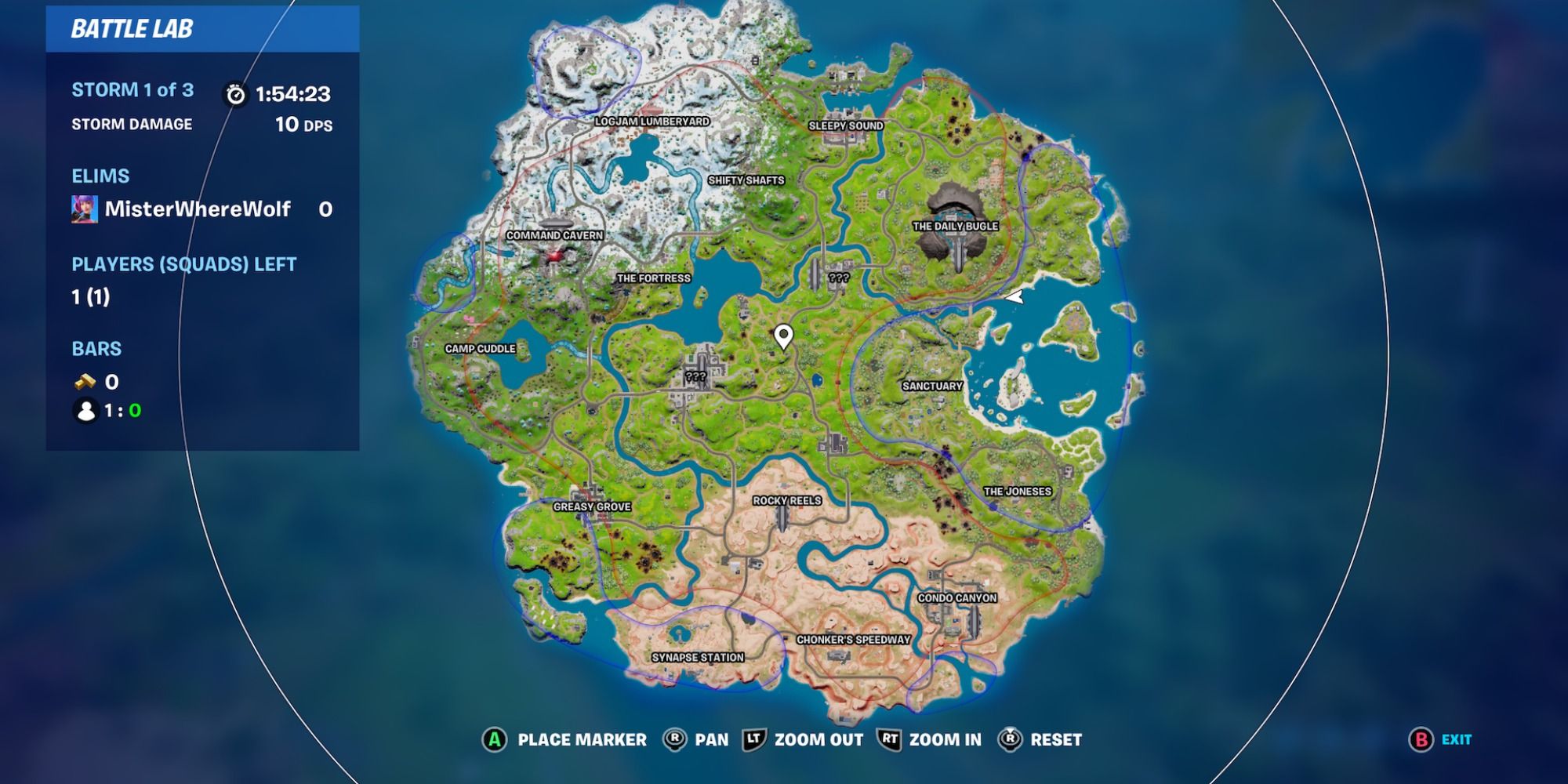 Easily one of the best parts of any new Fortnite season are the bounty of map changes and new locations to explore. Towards the end of most seasons, players are hoping for some fresh new places to land, loot, and battle within. In the case of Chapter 3 Season 2, the changes are plentiful.

Two brand new locations, The Fortress and Synapse Station, are highlights since they take up large chunks of their respective parts of the map. Of course, there are also smaller changes to each location because the Imagined Order has infiltrated and taken over. The game's map shows red and blue boundary lines that are essentially lines of demarcation between The Seven and the Imagined Order. 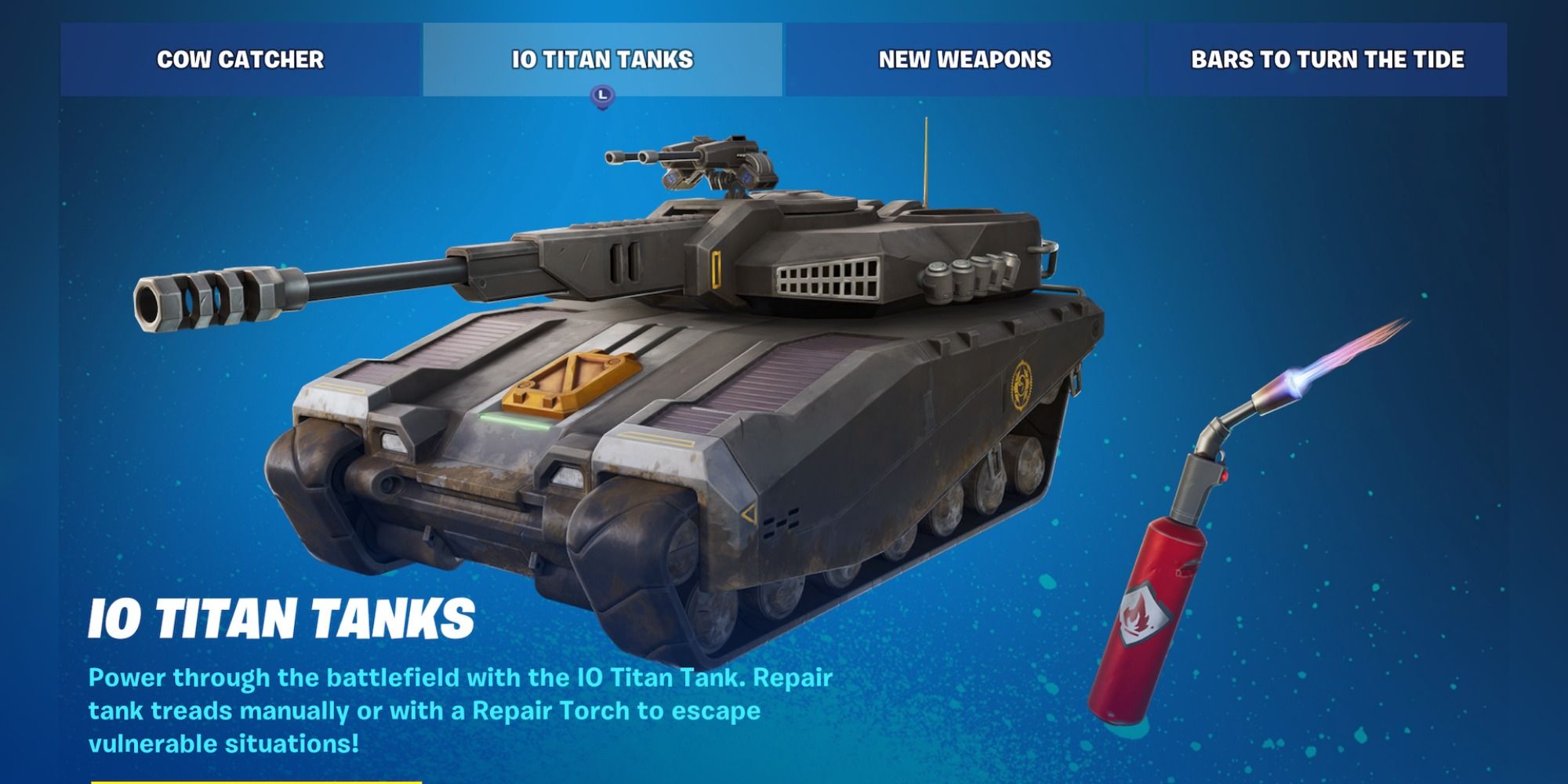 Fortnite has gone through various vehicles and traversal options since its inception. From Choppas to Ferraris to shopping carts, there has been no shortage of creative ways to get around the map. Chapter 3 Season 2 has perhaps added one of the most powerful vehicles in the form of IO Titan Tanks.

Apart from the divisive Mechs from seasons gone by, the IO Titan Tanks are downright juggernauts. These tanks offer massive explosive shells, thermal targeting, and a mountable turret. Fortunately, they can be countered with the uber-powerful C4 or by shooting the exposed engine block near the backs of the tanks. 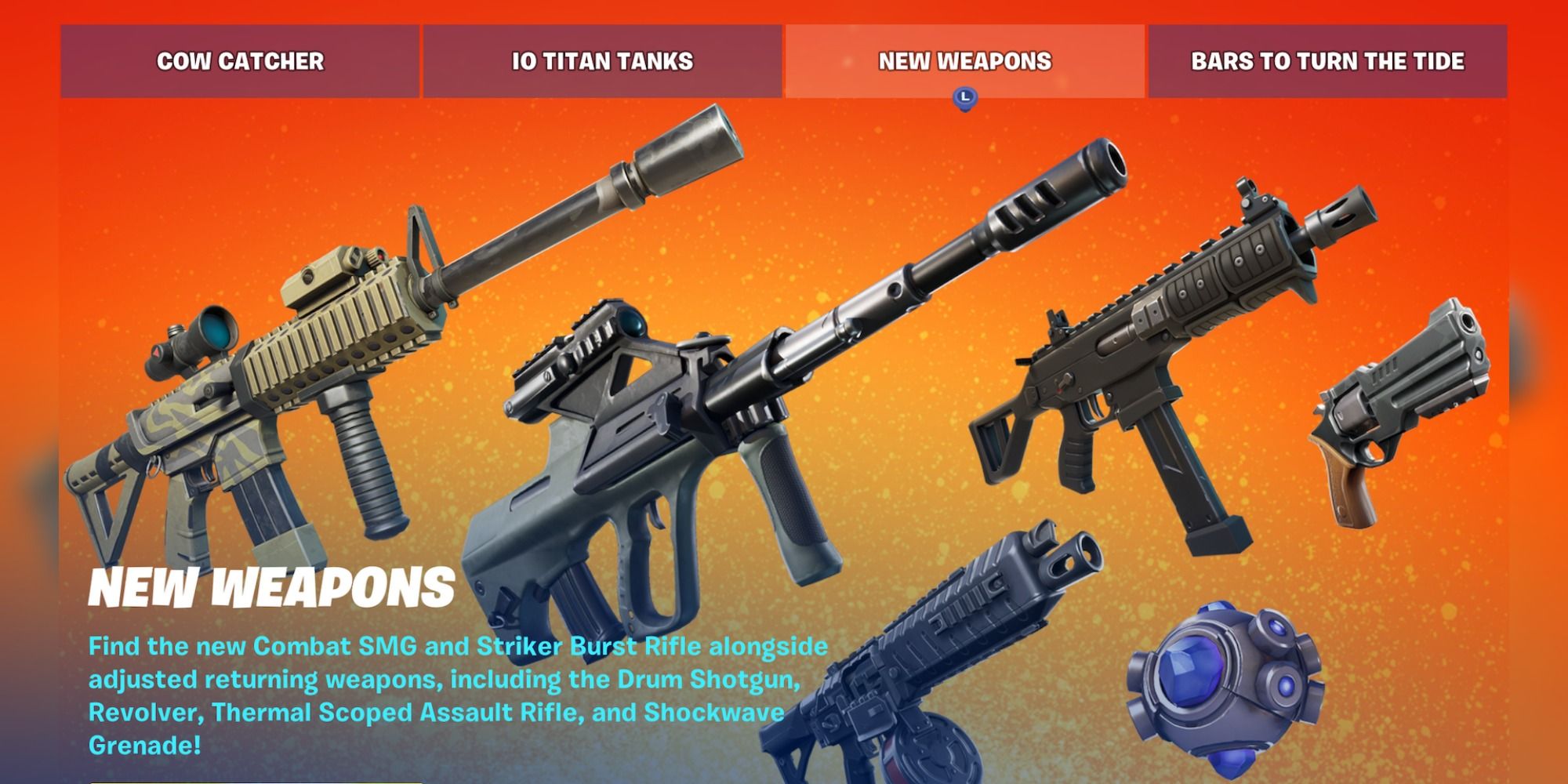 Much like map changes, Fortnite fans are usually pretty excited for new weapons, updates to the weapons they love, or unvaulted weapons and items. Chapter 3 Season 2 has brought a mix of all of these things which help reshape the meta.

Standouts include the return of the drum shotgun, the updated thermal assault rifle, the uber-powerful revolver, and even shockwave grenades making a comeback. The start of a new Fortnite season can often feel like a new game as players work to figure out the best new strategies and this new season opens the floodgates for meta changes. 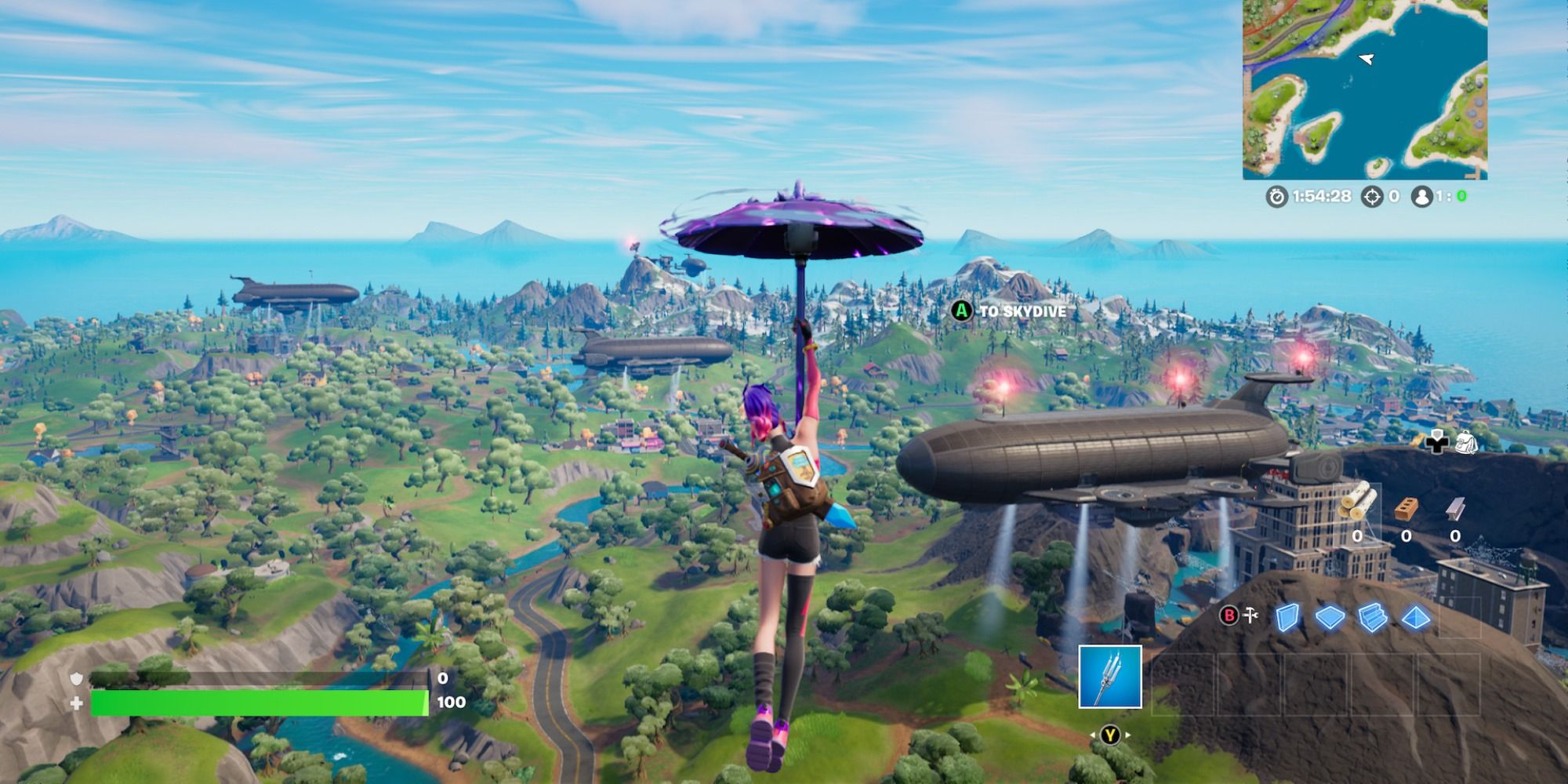 From your first jump out of the battle bus, you will quickly notice the Fortnite island's airspace littered with massive zeppelins. Known as blimps, airships, or zeppelins, these massive flying machines hover around major points of interest including Titled Towers and the Daily Bugle.

These zeppelins are home to the Imagined Order as part of their raid on the Fortnite island. Don't expect a warm welcome upon entering one of these monstrosities, however. If you can contend with the IO brutes you might just find some rare loot, legendary weapons, and plenty of traversal options to help you move around the map.

3 The Return Of Funding Stations 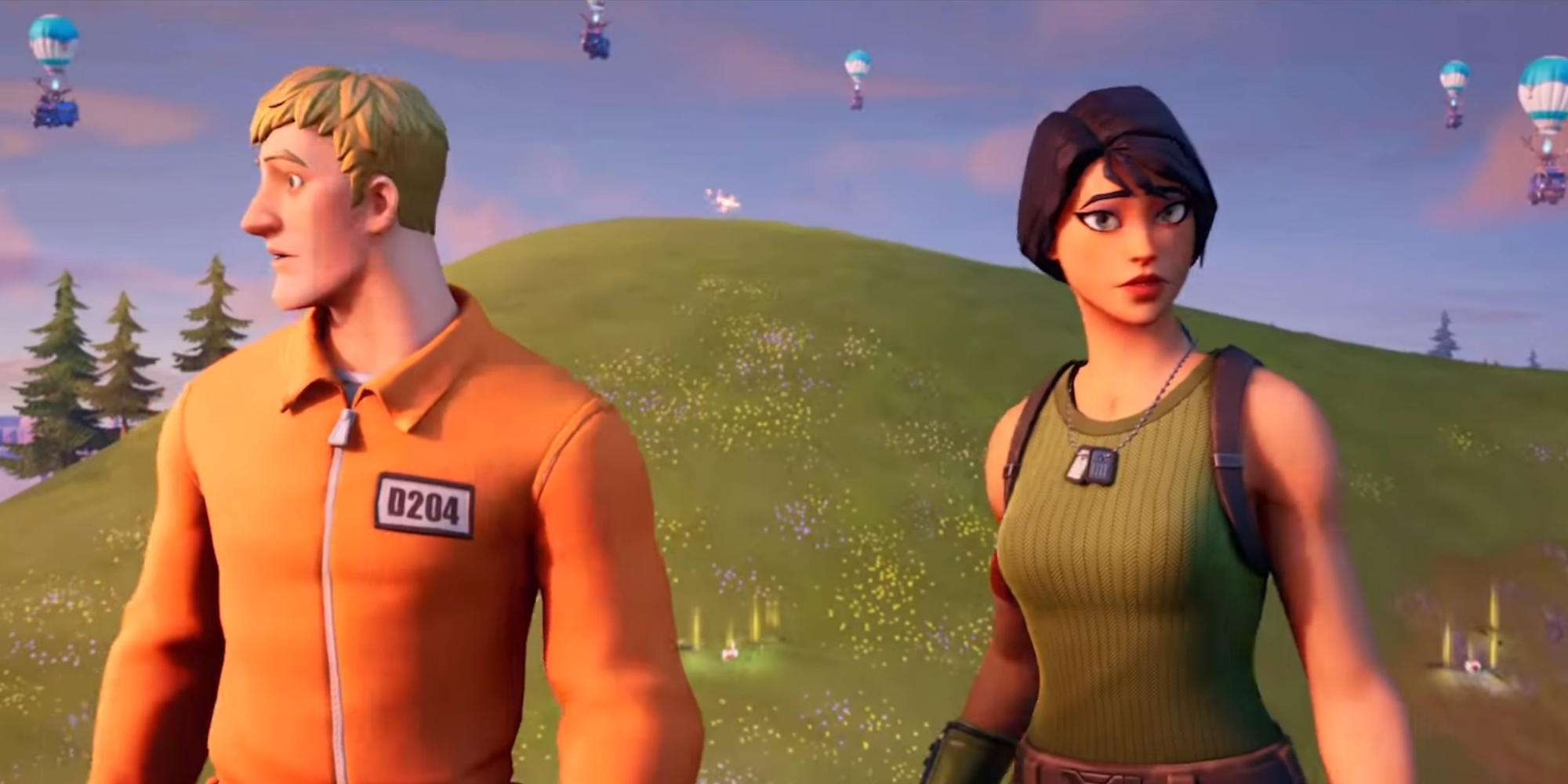 One of the more unique features from Chapter 2 of Fortnite was that of the funding stations which could be found all across the island. These funding stations help when fighting off the Cube Queen and her many minions. Players were able to fund turrets while also voting between two weapons or items to make their way to the game.

In Chapter 3 Season 2, the funding stations are back, this time having players fund an armored battle bus, turret stations, and eventually, the option to vote between the likes of the MK-7 assault rifle, rifts-to-go, balloons, plus many other surprises likely to come along in future updates. 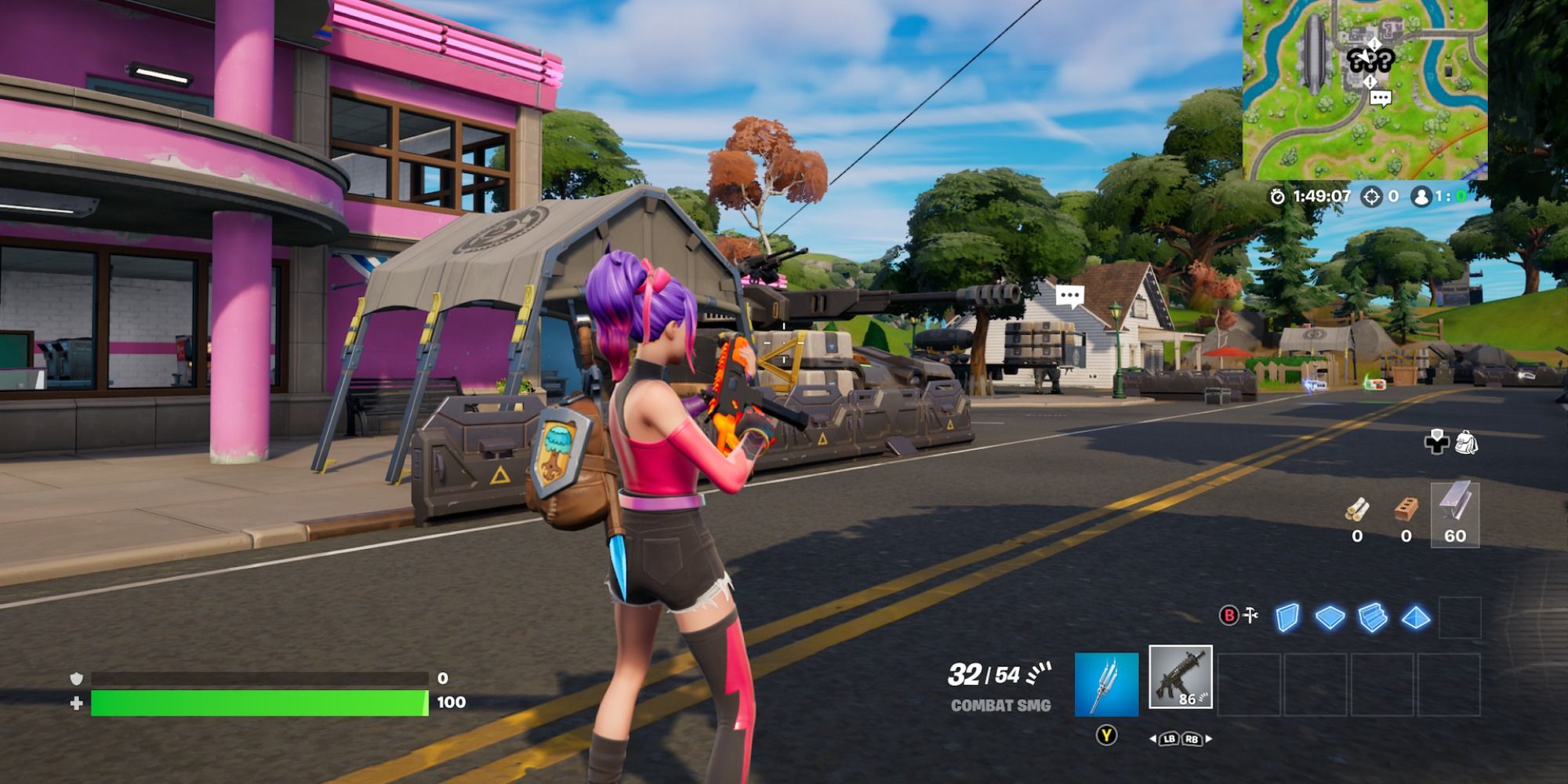 Okay, this change is very small but begs to be mentioned here since it's a fresh new way to traverse the more vertical parts of the map, specifically the zeppelins. Fortnite's newest season brings vertical ziplines.

If you want to quickly ascend certain builds or the aforementioned zeppelins, you can tie yourself into a vertical zipline to quickly and effectively shoot up to a higher point. Those who have the high ground have always done well in Fortnite and now the vertical ziplines are here to help with that.

1 Siege Cannons Are A Literal Blast 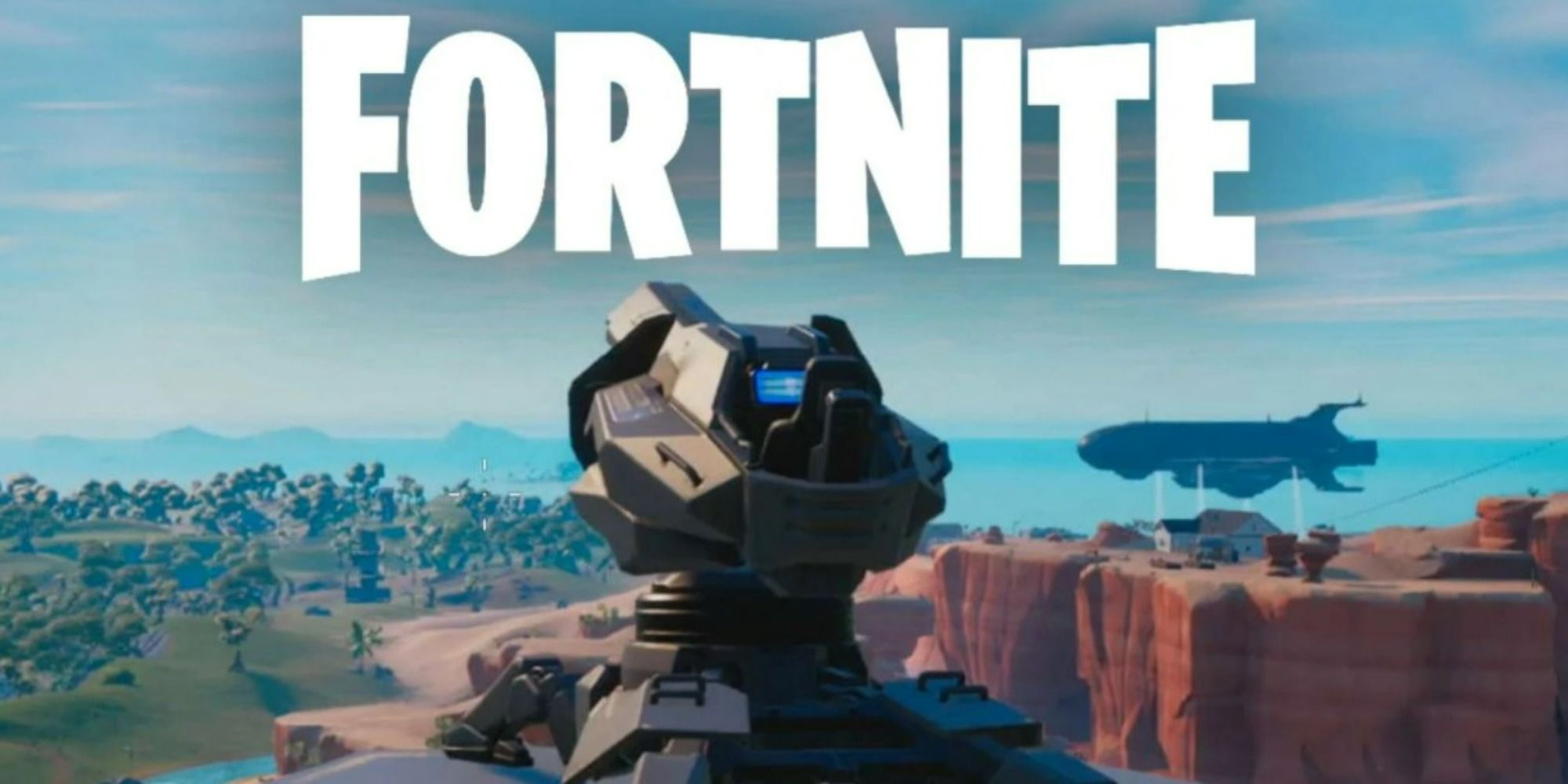 It seems the Imagined Order have spared no expense when it comes to adding new traversal objects to the island. Many long-time Fortnite players might remember the pirate cannons from way back in Chapter 1 Season 8. Well, these cannons are back in the form of the much upgraded Siege Cannons.

The Siege Cannons can be found within IO territory and have two main functions. The first function is to shoot out powerful cannons blasts with the second function literally shooting you across the map as you see fit. Don't worry, you can pull out your umbrella or glider to land safely.