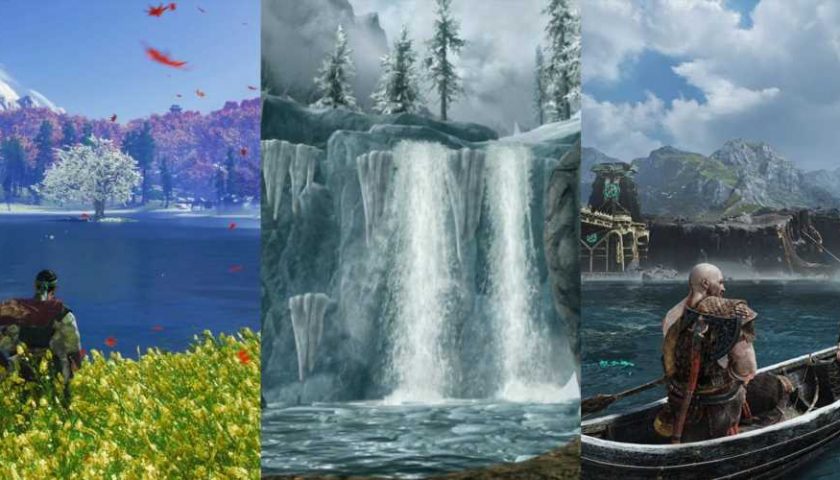 Lakes can provide some of the most beautifully scenic backdrops and are, more often than not, one of the best places to get away from it all. In games, the best lakes tempt you away from all the brainless violence and instead offer you the tantalisingly tempting proposition of a bit of peace and relaxation.

What better way to switch off than by immersing yourself in the best that mother nature has to offer? Whether you need to catch up on a bit of peaceful fishing, meditate on the treacherous path ahead, or simply sit back and take in the beauty, there’s always a good reason to stop by these video game lakes and take it all in. 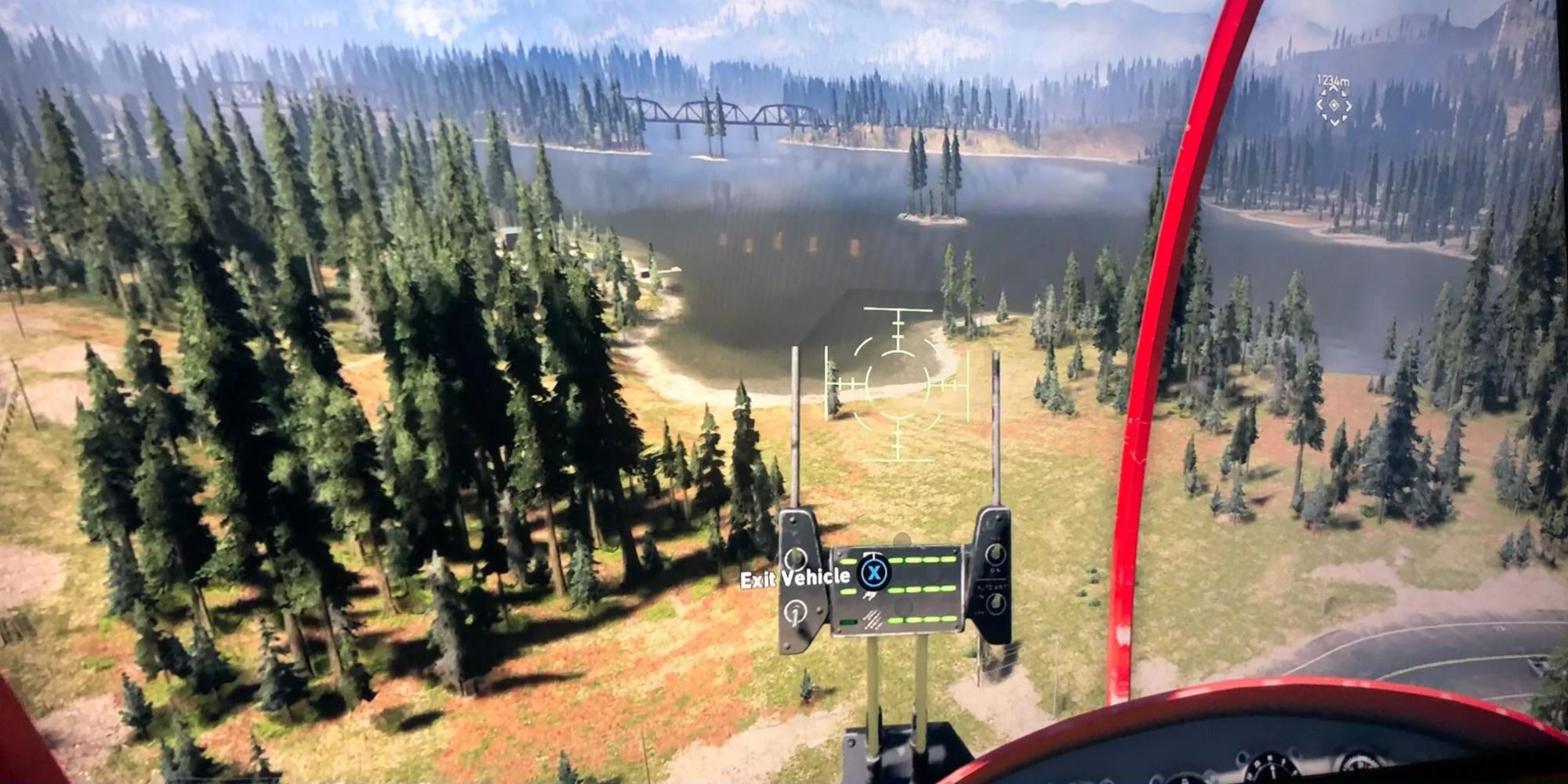 Despite entirely taking place in the fictional setting of Hope County, there are many references to real-world locations in Far Cry 5. One of the most idyllic and beautiful of those is inspired by St. Mary Lake, which is located near Glacier National Park in Montana.

It’s a beautiful sight to behold, with a small island in the middle that’s surrounded by a deep reflective pool of still blue water and numerous pine and fir trees scattered against the backdrop of gorgeously snow-covered mountains. It’s a great place to wind down for a spot of fishing as a way of taking a much-needed break from the violent pursual of the terrorist cultists of Far Cry 5. 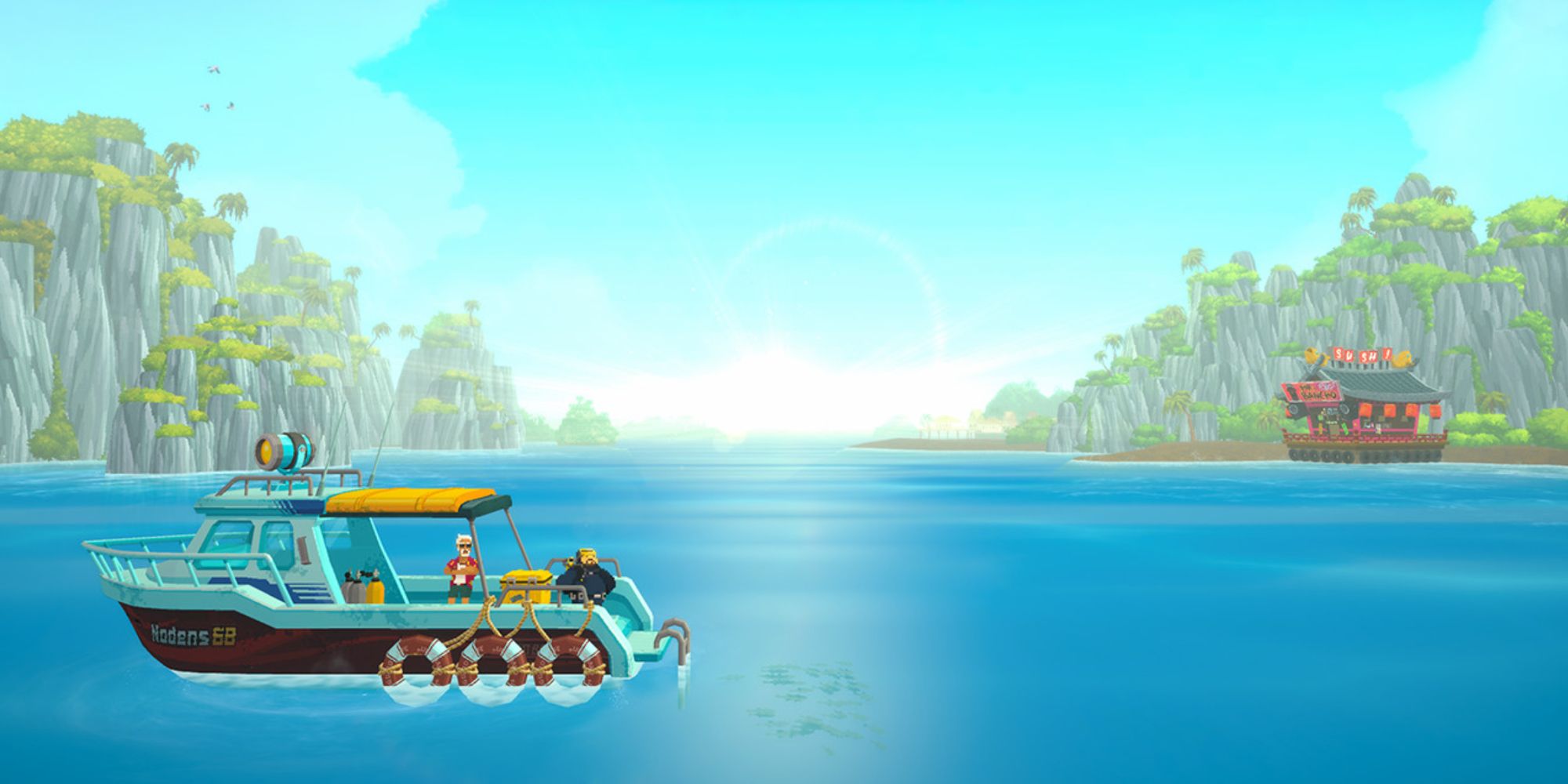 The mysterious Blue Hole lake is where you’ll be spending a lot of your time in Dave The Diver. After reluctantly taking on the task of managing a sushi restaurant, Dave must delve into the depths of the lake each day to stock the popular eatery with an assortment of rare and exotic fish at night.

It’s incredibly relaxing to dive down into the clear blue waters of Blue Hole, though the serenity is often interrupted by a selection of nasty sea creatures. The rewards are aplenty and include more than just fish – there are mysterious ancient artefacts to discover and head-scratching puzzles to solve within the lake’s wondrous marine ecosystem. 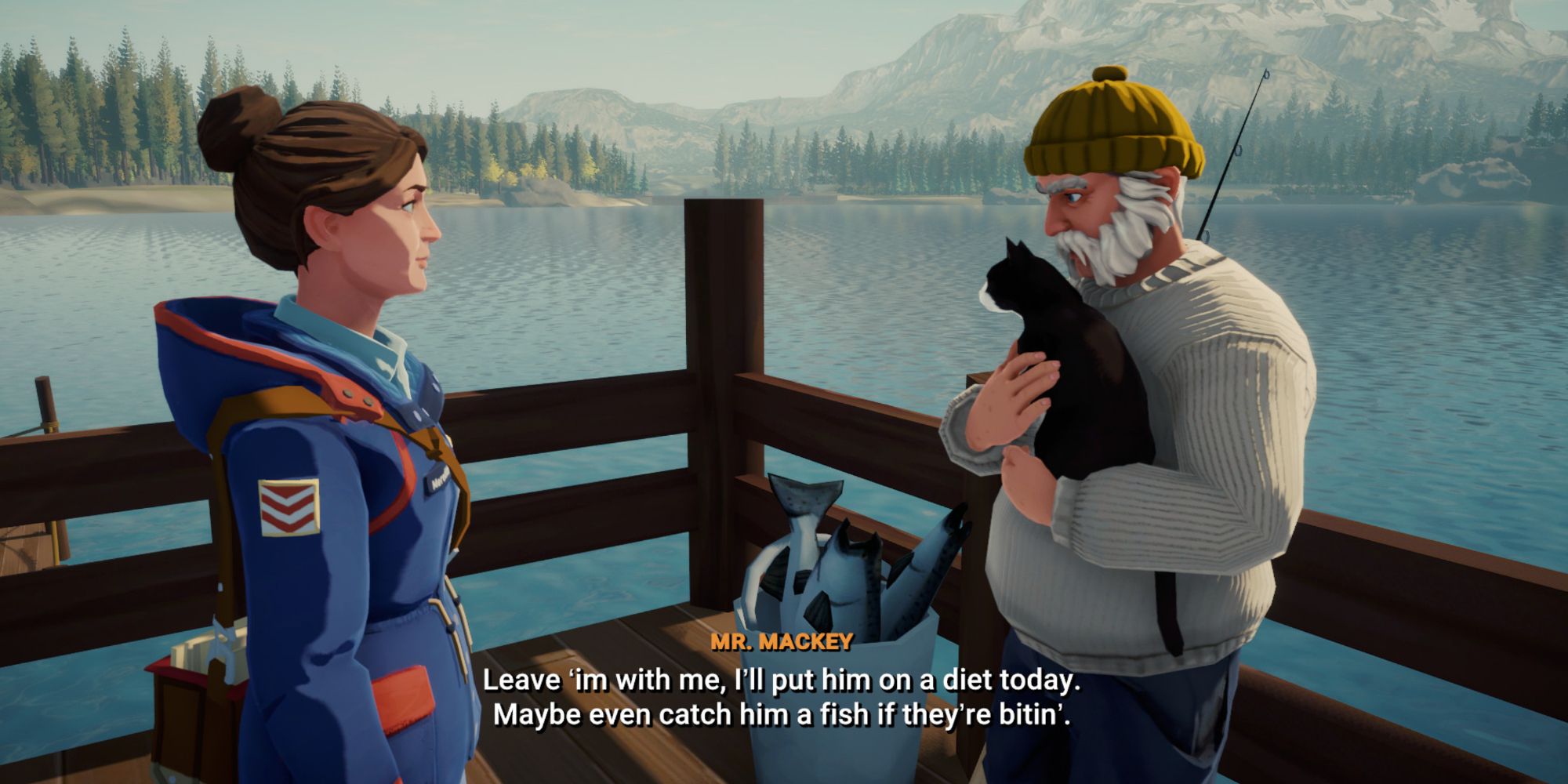 The lake in Gamious’ Lake is so impressive, the whole game is named after it. Perhaps not the most imaginative name in the world, Lake is a relaxing story-driven adventure set in the wonderful locale of Providence Oaks.

You spend your time as Meredith Weiss as she decides to take a break from the hustle and bustle of the big city to deliver mail in her idyllic lakeside hometown. The vast lake is the scenic focal point of the game, taking up a large portion of the map as you drive about in your dad’s old mail truck, delivering packages and building relationships with the humble townsfolk. It’s a beautiful narrative-driven experience with a touching tale at its core. 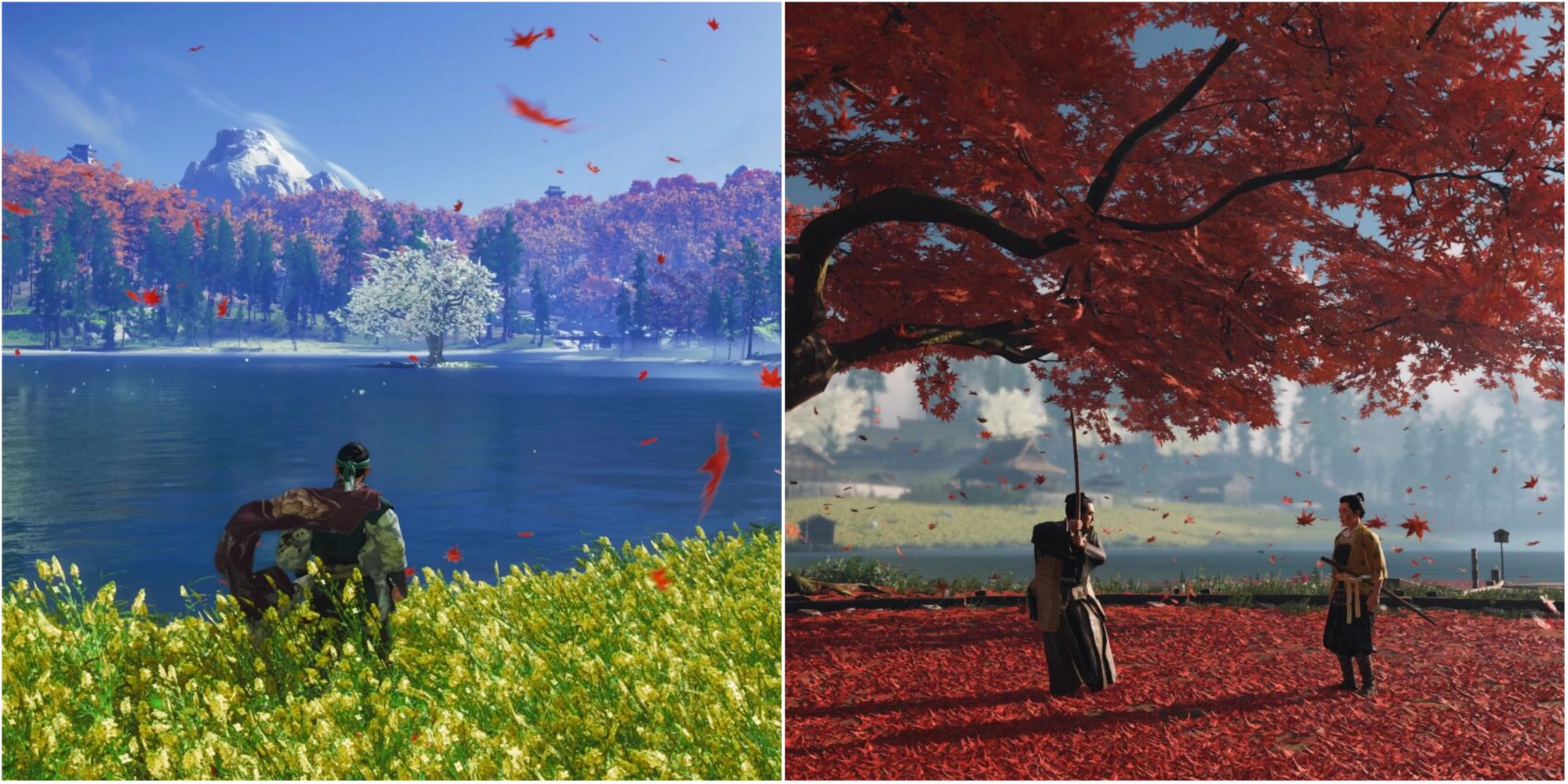 Being the original home of clan Sakai, Omi Village in Ghost of Tsushima holds a lot of significance for Jin. Omi Lake was where he learned the ways of the Samurai and how he became an expert in wielding a katana.

The sparring circle beside the lake is where Jin spent most of his time in his youth and serves as the backdrop to some important duels during the events of the game. The striking red hue of the dense autumnal leaves covering the ground contrasts nicely with the deep blue waters of the lake beyond it. There’s a reason why Ghost of Tsushima is one of the best-looking games ever made, and Omi Lake is a big one. 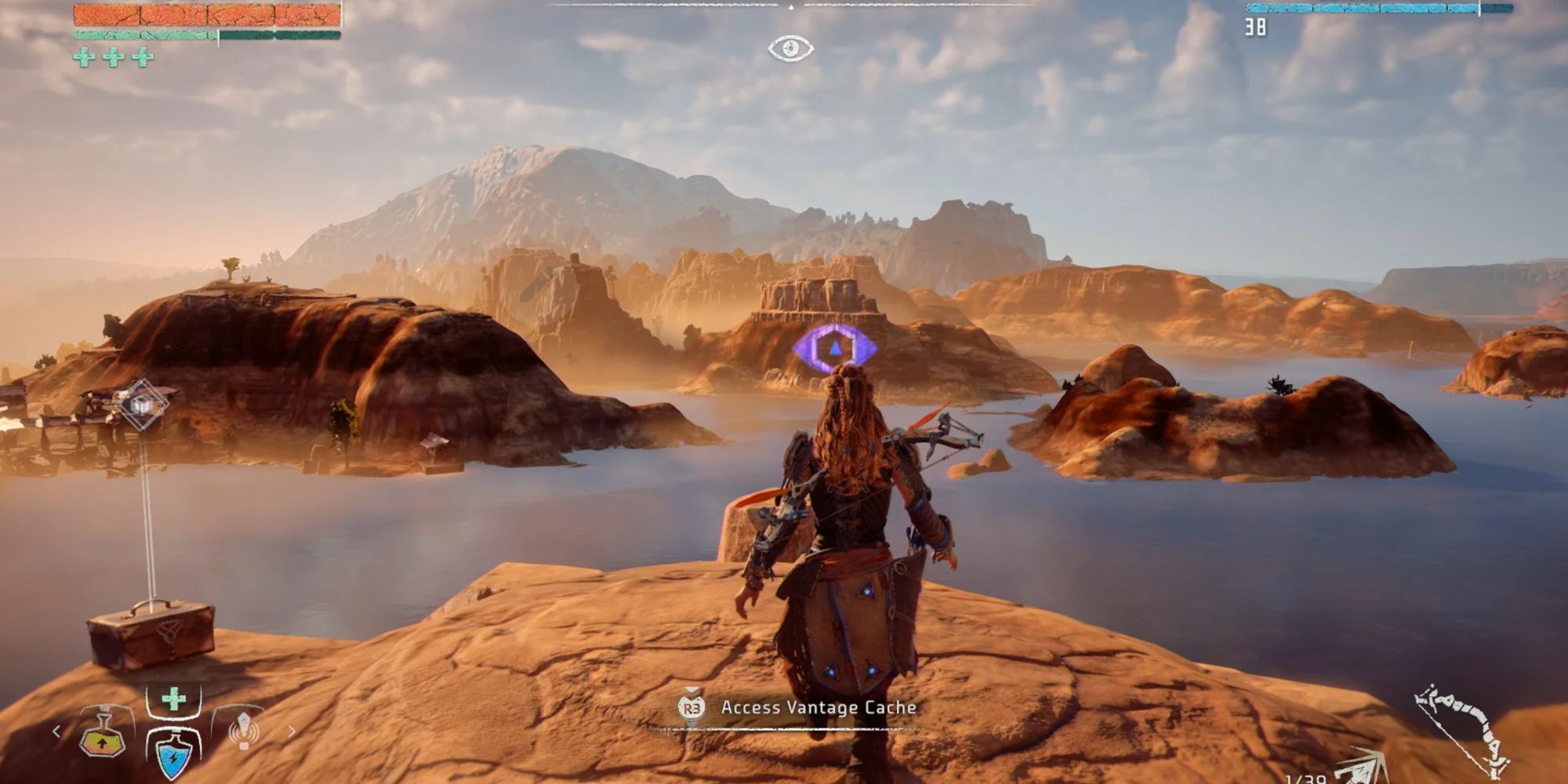 Horizon Zero Dawn’s Lake Powell is another lake based on an actual location. It acts as an echo of a long-gone era and a reminder of simpler times. The Vantage Points in Horizon Zero Dawn were a series of holographic spikes laid out by the troubled engineer, Bashar Mati.

After learning of the Faro Plague and the inevitable end of the world, he decided to document his story, which led him to ponder a troubling personal decision while walking aimlessly among the beauty of Lake Powell. Other than providing a nice bit of detailed backstory, the picturesque lake itself is surrounded by spectacular rock cliffs and forms a stunning canyon. 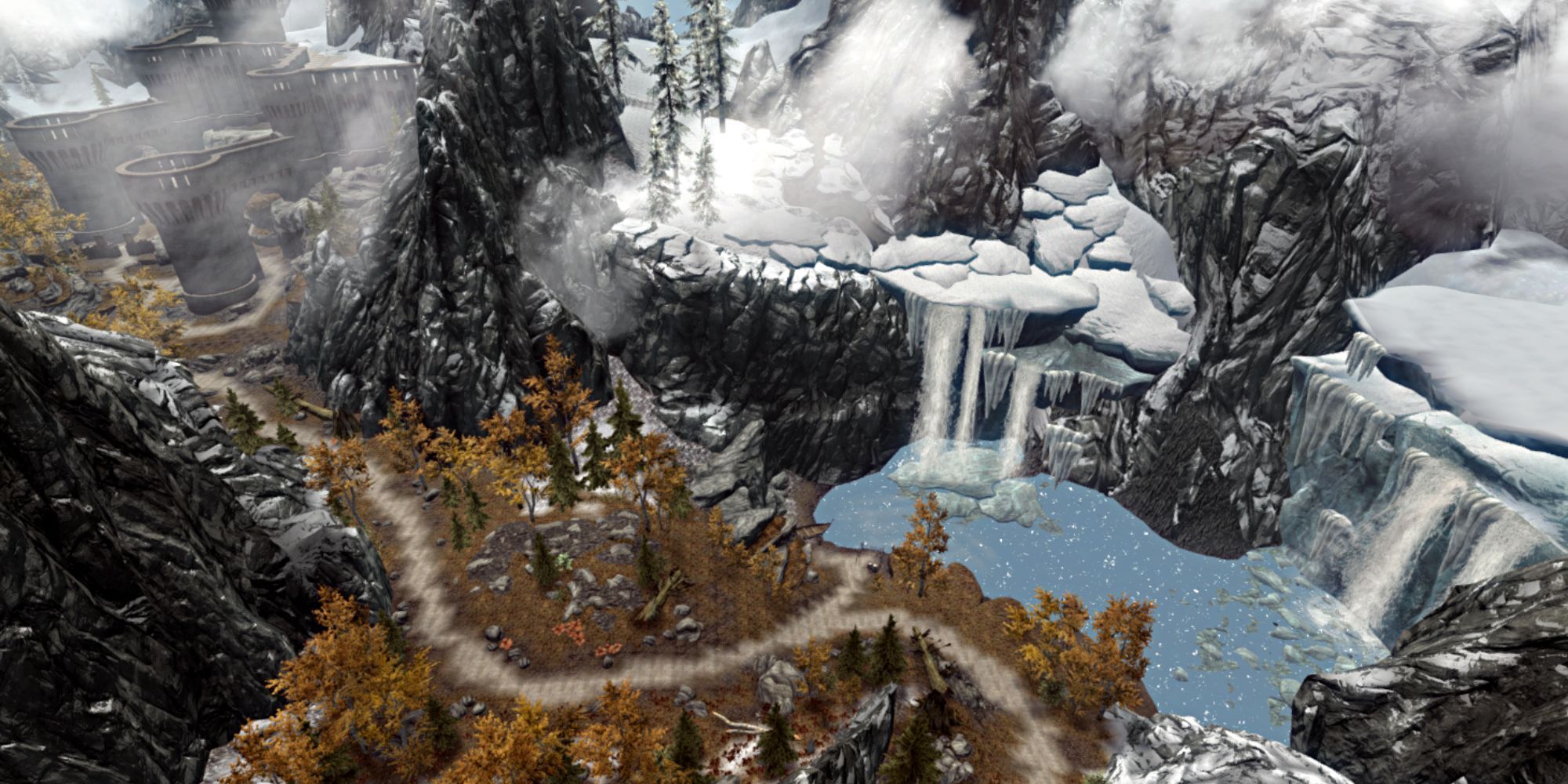 The picturesque Dayspring Canyon is a place you’ll want to stop by on your journey through the wintry and frost-troll-laden lands of Skyrim. Located a little off the beaten path just north of Stendarr’s Beacon, you will find this gorgeous locale through a small opening on the side of a mountain.

Entering will reward you with a beautiful glacial waterfall that overlooks a humble little lake. Beside it are the remnants of a fisherman’s camp, where you can settle down, cosy up, and gaze up at the frozen beauty that surrounds you. It is one of the most gorgeous locations in the entire game and is well worth a visit. 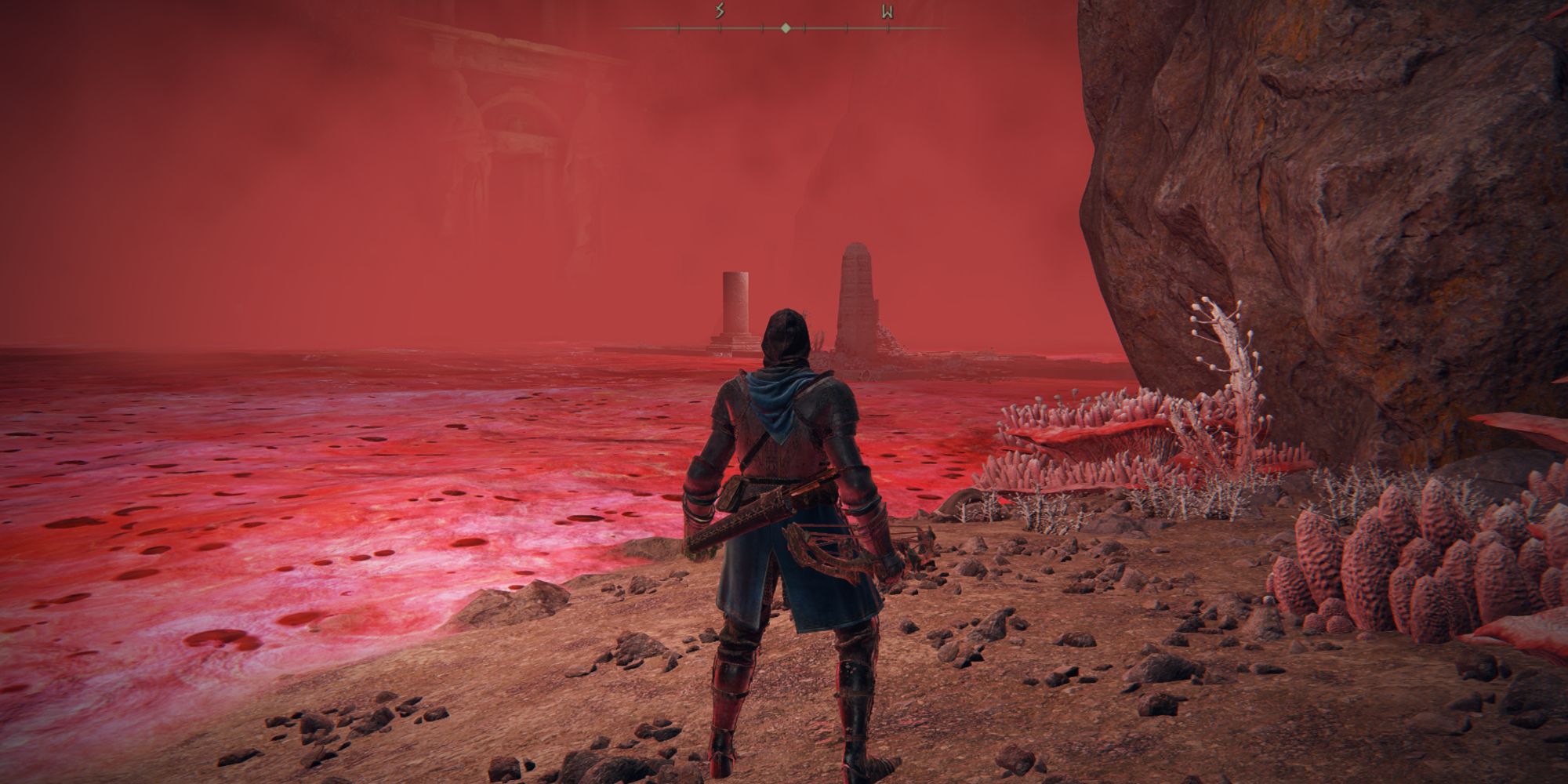 Unlike every other lake mentioned, Elden Ring’s Lake of Rot is a place we’d strongly recommend you steer clear of, unless you have a death wish. Stepping foot in this treacherous lake will quickly inflict you with scarlet rot and an early demise if you’re not too careful.

For the courageous few who are willing to risk their lives, delving into this hellish death trap can bring with it many worthwhile and lucrative rewards. After managing your rot buildup and surviving long enough, you’ll find a variety of essential upgrade materials and powerful weapons residing in the misty red pool of death. There’s no pleasure without pain. 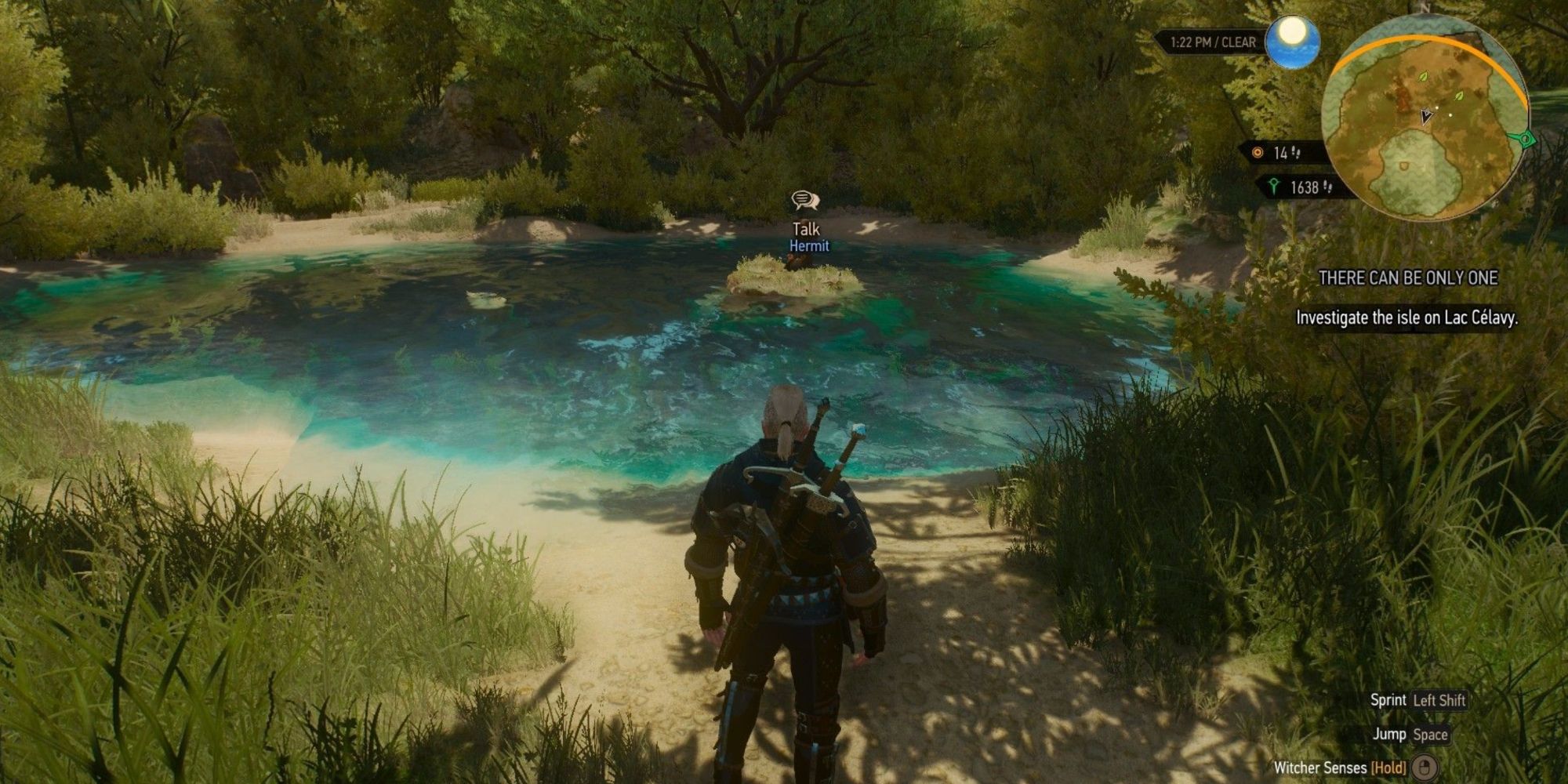 What you will find in The Witcher 3: Wild Hunt’s Lac Célavy is a great example of the smaller, narrative-rich encounters you can stumble upon in the game’s incredibly detailed open world. This curious little lake can be found in the western region of Toussaint in The Witcher 3’s fantastic and vibrantly sun-kissed Blood and Wine DLC.

You will find a meditating Hermit in the middle of the lake, which is surrounded by five stones that each represent a chivalric virtue. If you’ve demonstrated each of the virtues, you are invited to fight him for a reward. If you win, the Hermit will reveal her true form as the fabled Lady of the Lake and give you the powerful Aerondight sword. Never judge a Hermit by its cover.

2 The Legend Of Zelda: Breath Of The Wild – Lake Hylia 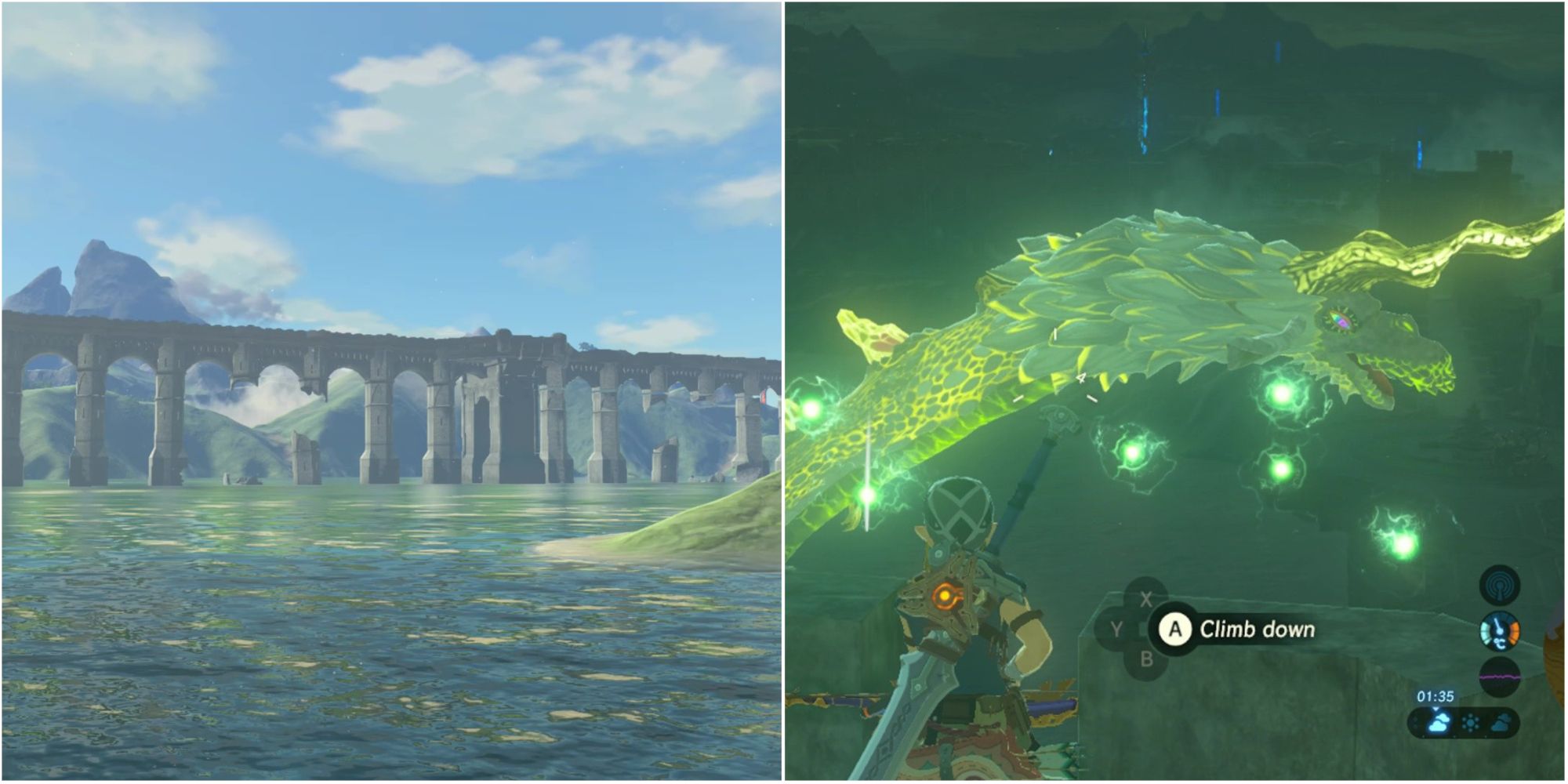 As one of the most recognisable locations in the entire series, Lake Hylia has featured in multiple iterations of The Legend of Zelda and is a magnificent sight in Breath of the Wild.

Standing ominous over the lake is a grand Hylian stone bridge with a huge circular area in the middle – perfect for a bit of 360-degree sightseeing. It’s a fine place to view the game’s gorgeous cel-shaded graphics and impressive environments from a distance. What’s more, if you hang about till nightfall you may catch a glimpse of one of the three spirit dragons, Farosh, as he glides over the bridge in a very mystical and ethereal fashion. 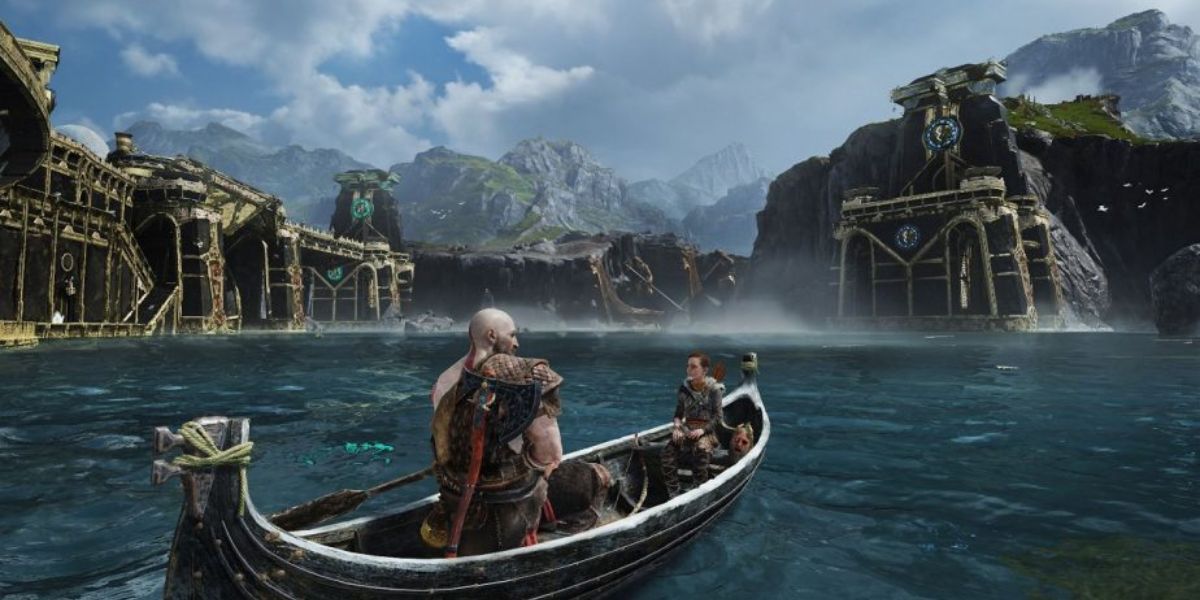 God of War’s Lake of Nine acts as the game’s main hub area, where Kratos and Atreus will stumble upon side quests, fight stray monsters, hunt down collectables, and access the various surrounding towers to enter the different realms of Midgard.

The lake is a joy to explore, especially when paddling through the clear blue waters while listening to one of Mimir’s classic tales. It all makes the world feel alive and provides a bit of respite from the game’s brutally visceral combat. Due to the presence of the magnificent World Serpent, the lake will dynamically change over time as he moves, uncovering even more areas to explore and goodies to find.