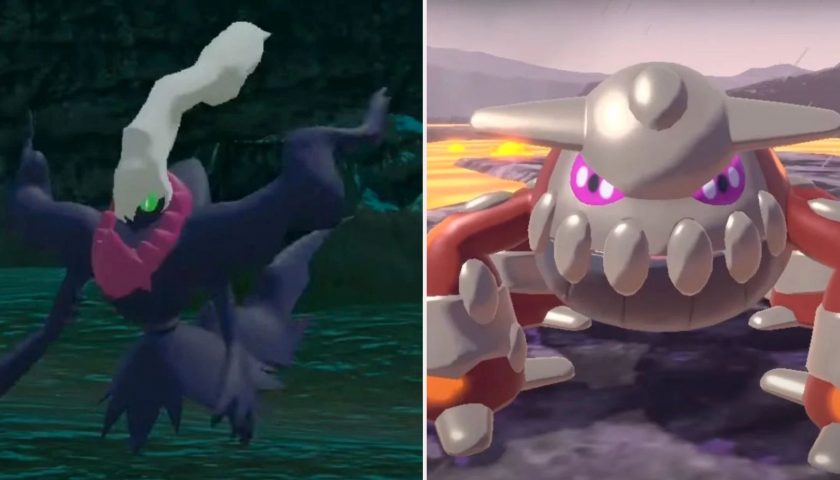 Pokemon Legends: Arceus has been hailed by fans as one of the most accessible shiny-hunting games in the entirety of the series. By utilizing potent methods such as Mass Outbreaks and Massive Mass Outbreaks, players can find hordes of rare-colored shiny Pokemon with relative ease. However, certain Pokemon — such as coveted legendaries — are shiny-locked, meaning that they can never be encountered in that form.

While they still can't be hunted in the wild, Pokemon Home gives them a chance to… well shine in Legends Arceus. The highly-praised Pokemon storage system is now compatible with games up to Pokemon Brilliant Diamond and Shining Pearl and includes Legends Arceus. This means that if you're lucky enough to have one of these mythical or legendary 'mons in an older game, you can now bring them into the beautiful world of Legends. Here are some of the most striking shinies that are now available. 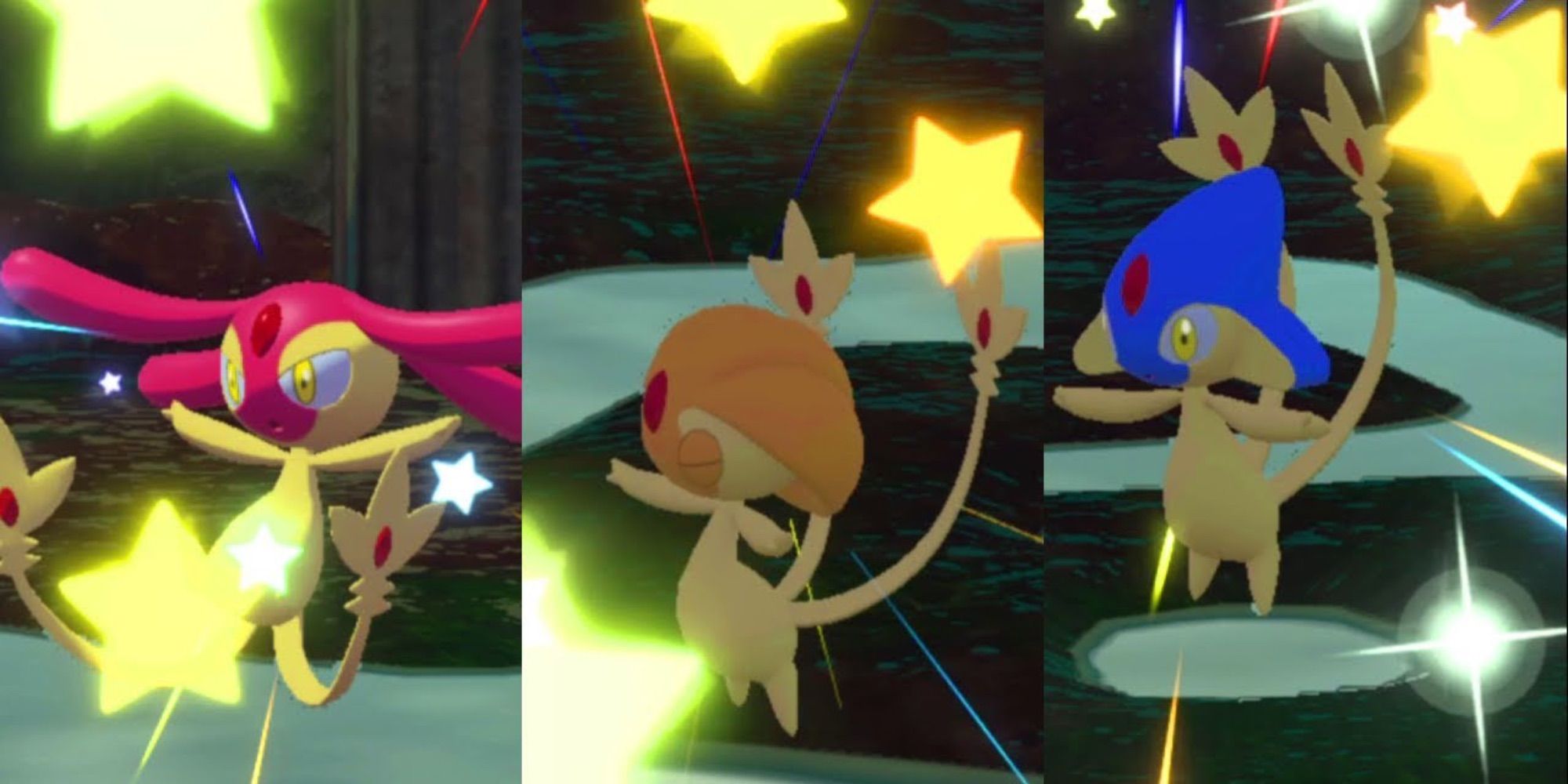 Starting this list off is an enigmatic trio whose shinies don't disappoint. First appearing in Pokemon Diamond and Pearl, these three Psychic legendaries are often referred to as the Lake Guardians. In Pokemon Diamond and Pearl, they each guard a different lake within the Sinnoh region, and in Hisui they do the same, with each Pokemon giving the player a trial upon entry to their sacred lakes.

Their shiny forms are subtle, but work quite well. The gray-blue underbellies each one of them has is now replaced by a cream-gold color, adding a sense of warmth to the overall color pallette. Their other primary colors on their heads are slightly modified as well. Azelf's periwinkle turns into a deep, striking blue, Uxie's light yellow shifts to a peachy hue, and Mesprit's light pink transforms into a quite nice magenta. 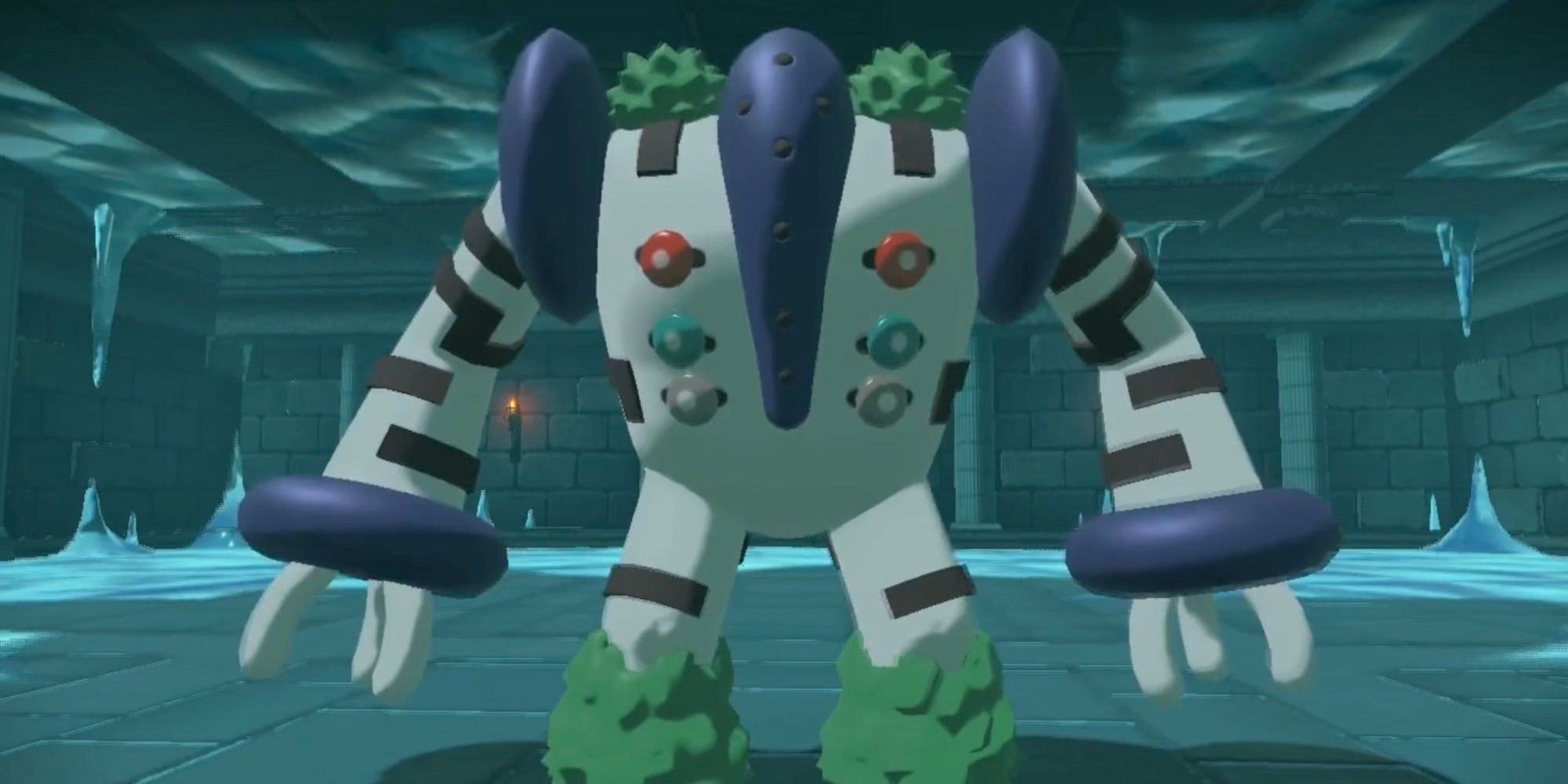 A legend throughout the ages, Regigigas is a Pokemon whose power is known to be of titanic proportions. It's said to have pulled the very continents in ancient times and formed Regirock, Regice, And Registeel by hand. As such, it's a Pokemon that fits in perfectly within the world of Legends Arceus, with one of the main themes of the game being the ancient mysteries of Sinnoh and Hisui.

Its shiny coloration is a very simple change, but one that suits it well. The large yellow portions of its body change to a unique, dark blue-gray color, drastically changing the overall tone of the colors as a whole. The rest of the branches and white parts of the body remain wholly unchanged. This gives it the appearance of looking possibly older and reflecting the massive age of this legendary golem-master. 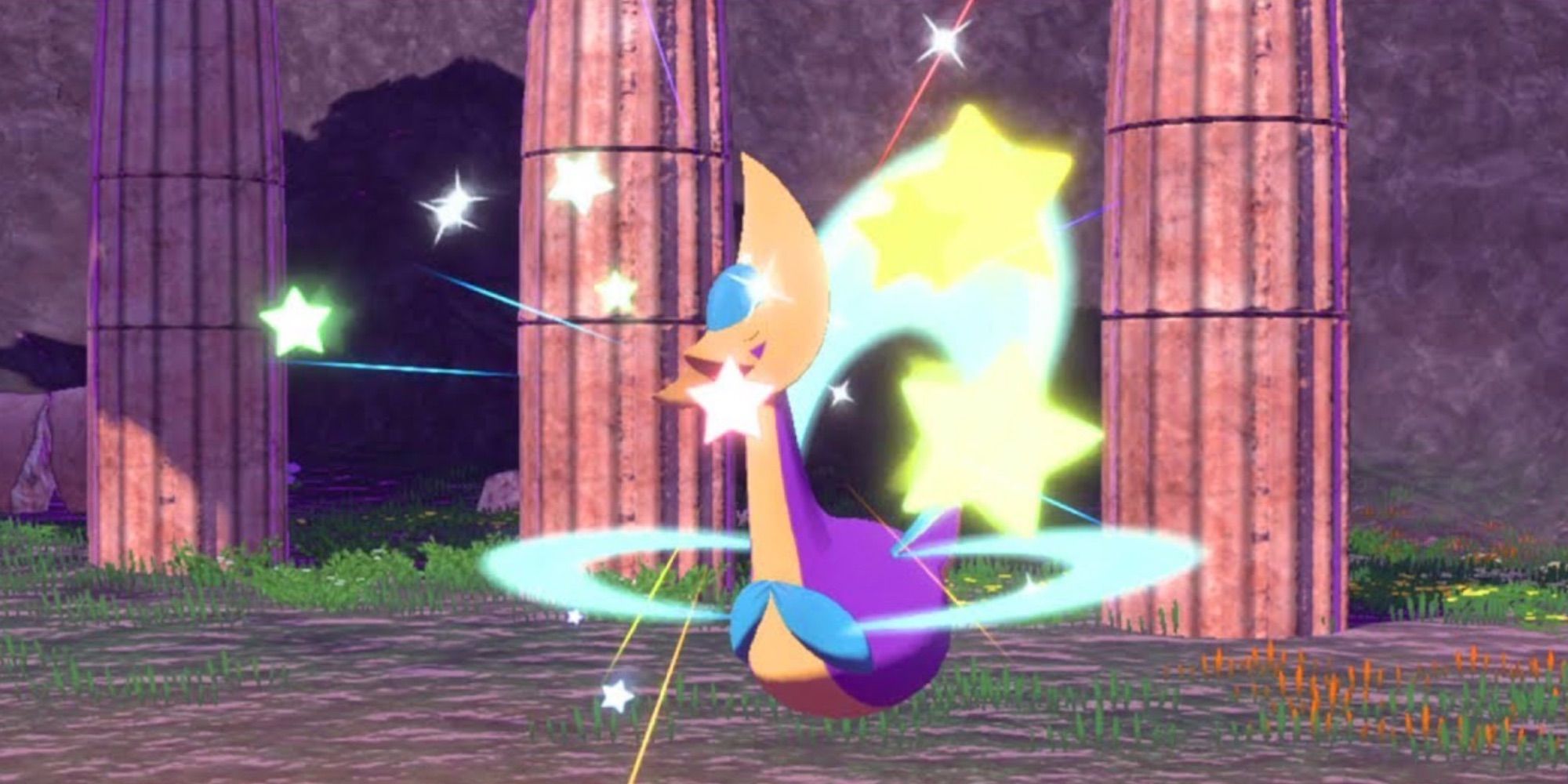 Symbolizing good dreams and the crescent moon, Cresselia is a Pokemon that shows the gentle, calming side of nighttime. In its many appearances throughout the series, it often lends a helping hand against negative foes, including the malevolent Darkrai, its (usually) evil counterpart. With its new signature move Lunar Blessing, its healing powers can help turn the tide of any battle.

Cresselia's newly-available shiny is one that absolutely knocks it out of the park. While its normal colors are a sea of pinks that are reminiscent of dawn or dusk, the shiny form brings on the power of the night. Its previously pink, Saturn-esque rings now turn a neon blue, with bright purple accents furthering this nocturnal color change. 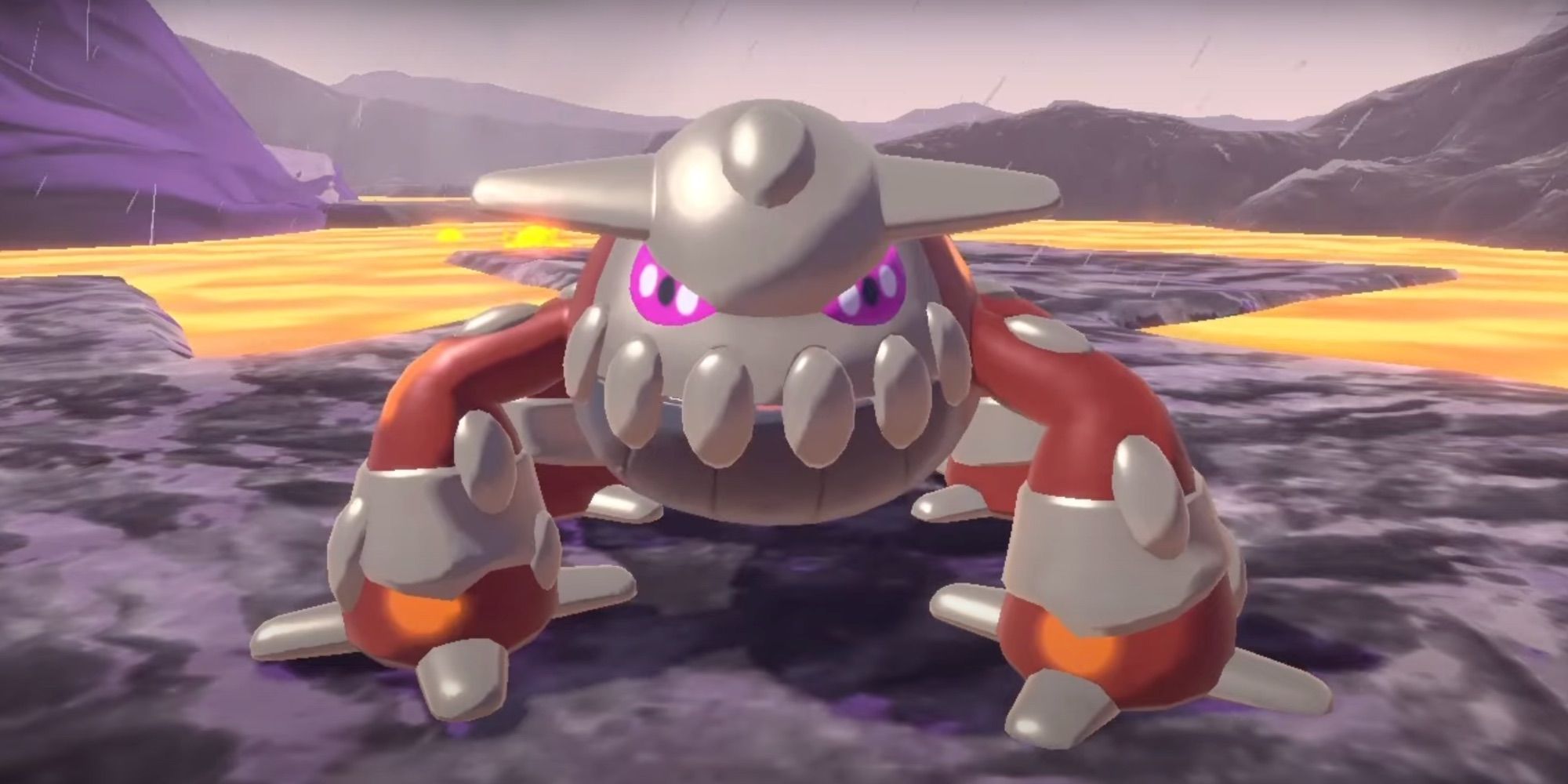 With its fiery body and intimidating cry, Heatran is a fearsome legendary worth adding to your team. It has a body of constantly melting and solidifying metals and strong claws that allow it to climb on walls and even entirely upside down, as it is often depicted.

Its shiny form doesn't change much, but the alterations work well. Firstly, its main body turns lighter, making its various reds, oranges, grays, and browns pop even more. The most striking aspect of the shiny are its eyes, which become a piercing purple that stands out against the rest of its colors, ensuring it's a shiny you won't miss.

The first mythical Pokemon on this list, Manaphy, and its counterpart Phione are unique in that they are the only breedable mythical Pokemon. In previous series entries, if the player breeds a Manaphy with a Ditto, it will produce Phione, and not a Manaphy. This unique process allows for players to shiny hunt Phione in games that have breeding as a feature. However, shiny Manaphy is an entirely different beast to obtain.

Requiring specific copies of the original Pokemon Ranger DS game that have not already had the Manaphy event redeemed, the quest to hunt for this shiny mythical is a tedious one, involving the creation of multiple save files, repeated game restarts, and more. If you are lucky enough to have one, you can now transfer it all the way up to Legends Arceus alongside Phione. Each turn a slightly lighter shade of blue, adding a slight twist to their already charming designs.

Classified as the gratitude Pokemon, Shaymin is an absolutely adorable mythical Pokemon. It is said that its flowers only bloom for those it is grateful for, and if you are able to find a shiny variant of this elusive floral hedgehog, your gratitude may well be overflowing. Becoming more accessibly huntable via an event in Pokemon Brilliant Diamond and Shining Pearl, there is no better time than now to hunt for it and transfer it over to Legends Arceus.

Shiny Shaymin has one major color change, and it is a fantastic one. The prominent light green grass on its back and eyes shifts to a poignant mint green. The result is an extremely noticeable shiny that is worth seeking out and hunting. 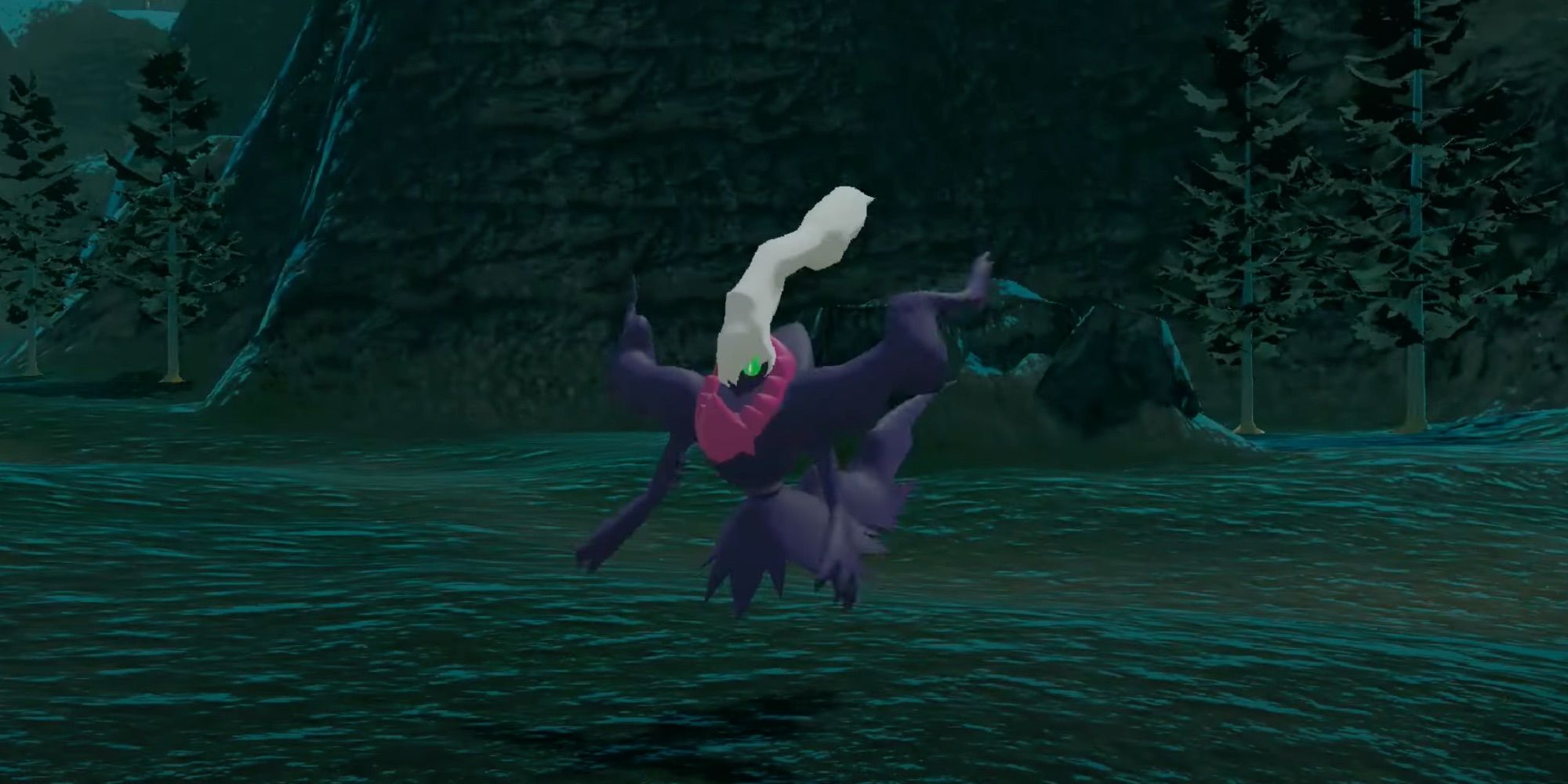 Master of nightmares and arch nemesis of Cresselia, Darkrai is a Pokemon that strikes fear into the heart of its enemies. Shrouded in a cape of darkness, it is famous for locking opponents into endless nightmares and feeding off of their energy while they attempt to escape. Luckily, it is capture in a Pokeball, and you can use its powers on your journey throughout Hisui.

The newly-available shiny form maintains this dark aesthetic, but with a slight twist. Its previously black body turns a deep, dark purple, and its red scarf changes to magenta. Standout green eyes top it off, making shiny Darkrai stand out against the darkness it inhabits 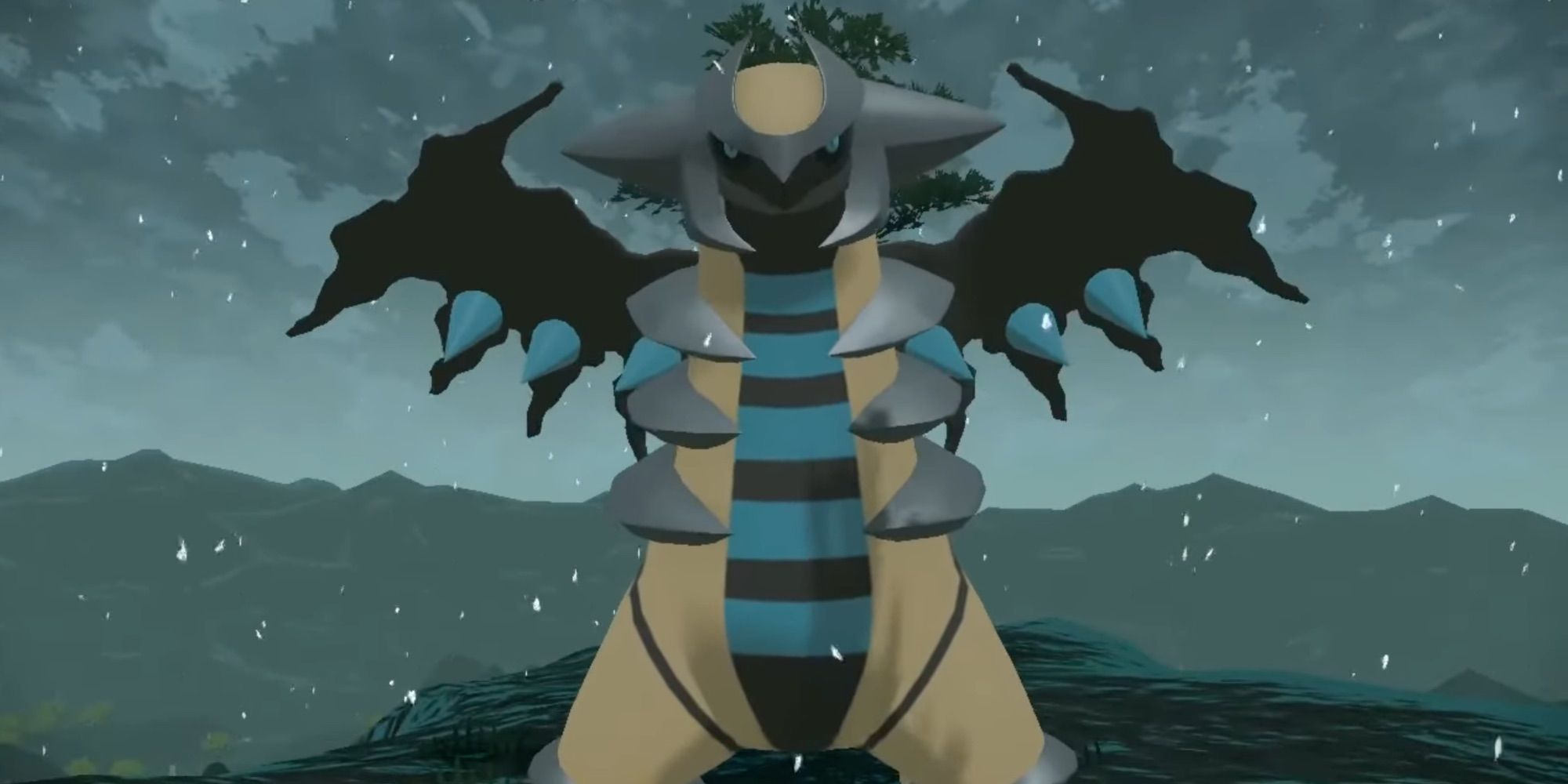 Banished to the terrifying Reverse World, Giratina is a dragon of demonic proportions. The third and forsaken member of the Creation Trio, Giratina is a dual Dragon and Ghost type Pokemon. It has two forms, being Altered and Origin, with the latter being introduced in Pokemon Platinum. When in its held-back Altered state, it has six massive legs and two shadowy wings. In its unbound Origin Forme, its legs are replaced with spikes and towering tentacle-like appendages that will terrify any opponent you encounter.

Its shiny form replaces its reds and yellows with sleek silver and light blue, elevating its look while still maintaining its terrifying appearance. 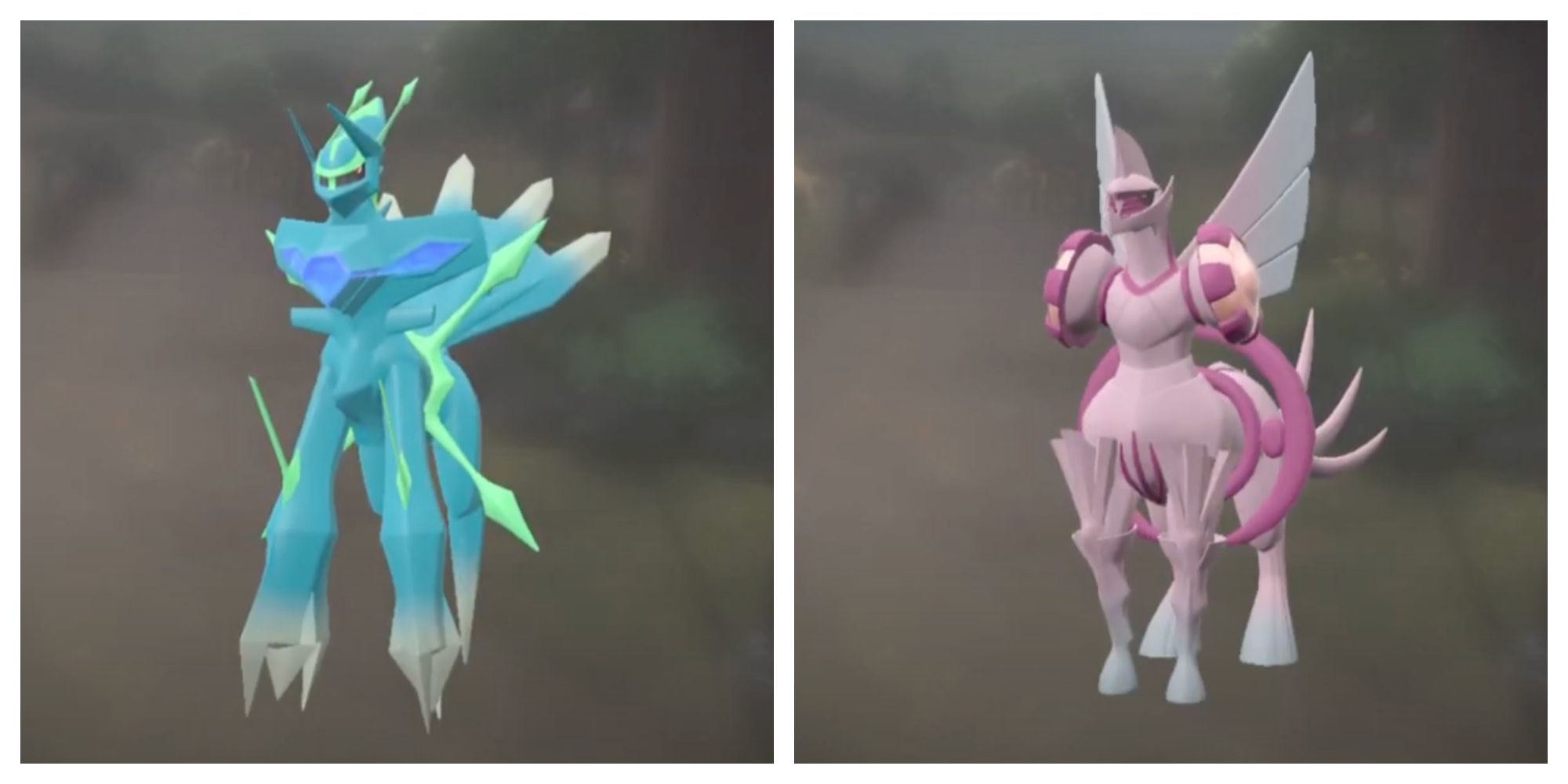 In Pokemon Legends Arceus, both Dialga and Palkia receive powerful new Origin Formes to match their disgraced sibling Giratina. Characterized by unbridled and uncontainable power, these new forms showcase the true power of these legendaries being released. The shiny versions of these forms are now finally available for players to enjoy.

While Dialga and Palkia's Origin Formes are new, their shinies are based off of their original shiny forms, and these colors carry over quite well. Palkia becomes more pink, while Dialga gains lighter blue shades with the addition of teal accents throughout. 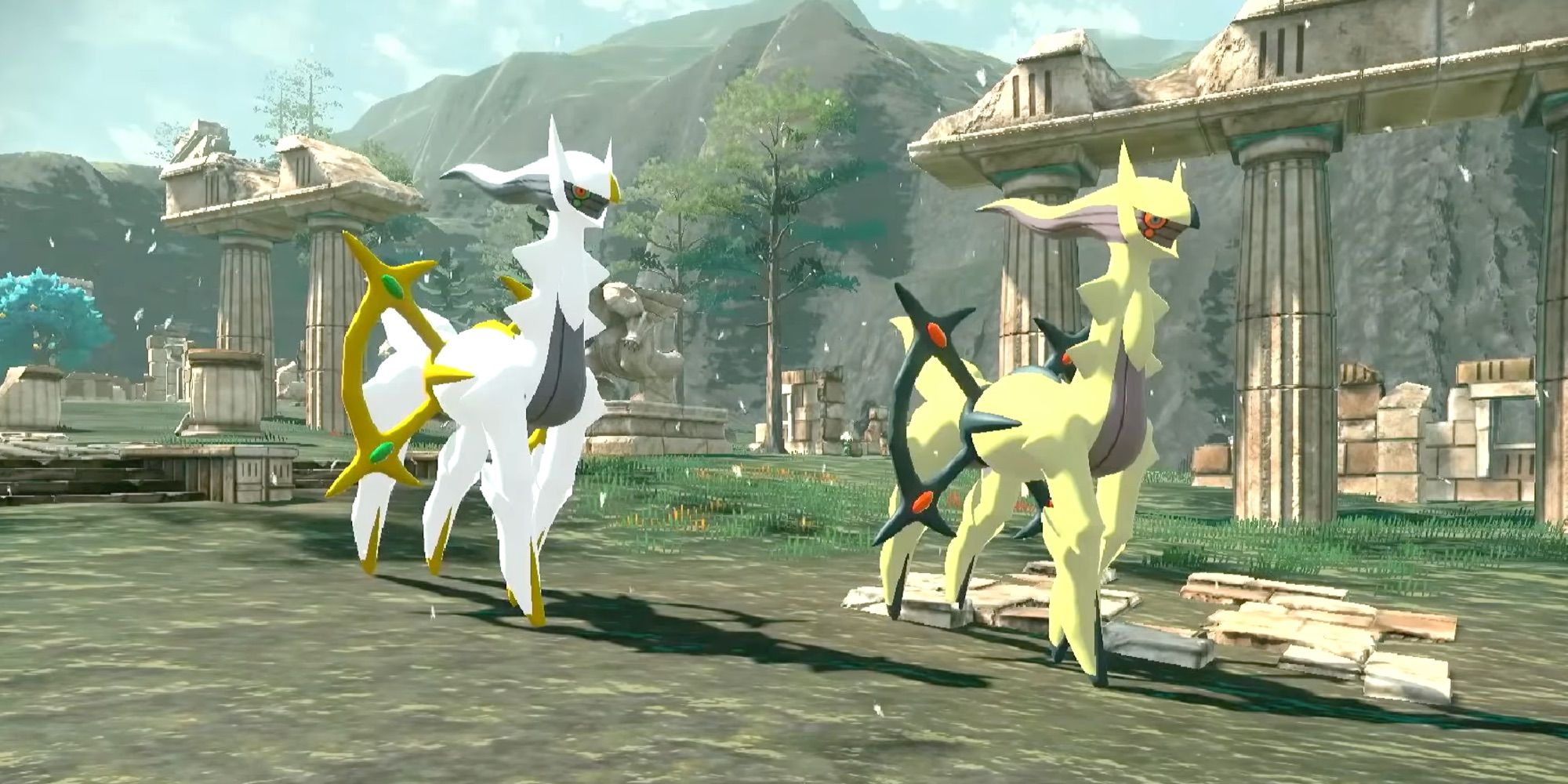 With the new update to Pokemon Home, Legends Arceus' titular mythical Pokemon is finally available in all of its shiny glory. For the first time ever as well, Arceus is huntable within Pokemon Brilliant Diamond and Shining Pearl. After completing every main quest and capturing Arceus in Legends, if you have BDSP save data registered on your Switch account, you are able to encounter this godly Pokemon in the chibi remakes. This Arceus can be shiny, giving you the opportunity to transfer it over into the ancient land of Hisui once captured.

Shiny Arceus is simple in that it changes from white to gold, a color truly befitting of the creator of all Pokemon. This change is a simple and effective one, creating a shiny that looks especially at home within the wilds of Hisui that it rules.