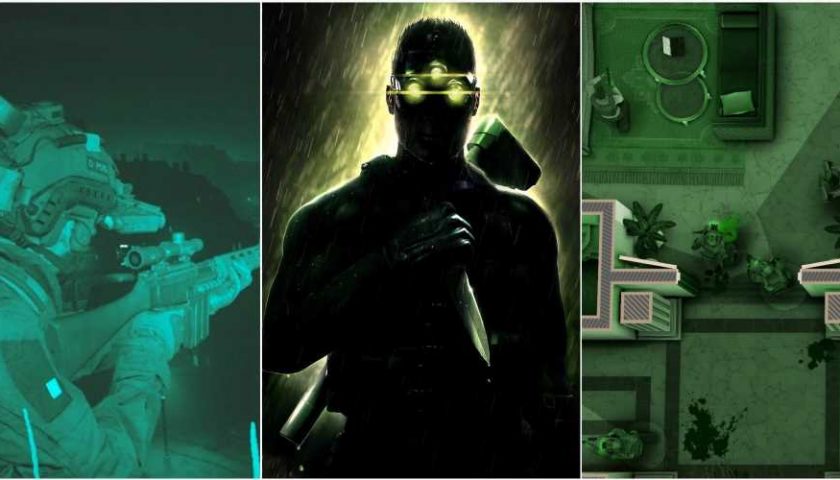 Night Vision Goggles (NVG) are an increasingly frequent tool in video games. One of their first appearances was in Tom Clancy's Ghost Recon (2001), after which no tactical shooter was really complete without them. Not only do NVGs add a unique element to a game's atmosphere, but they also come with a fun trade-off element where you have to be careful when to use them.

As a result, NVGs also started appearing in other genres, such as horror and survival games. The usage of night vision in games can be a hit or miss though. Sometimes it is a magical green filter with almost no downsides, while in other cases it mimics real-life rather well and provides a grainy binocular image. This raises the question: which games implement night vision the best way? 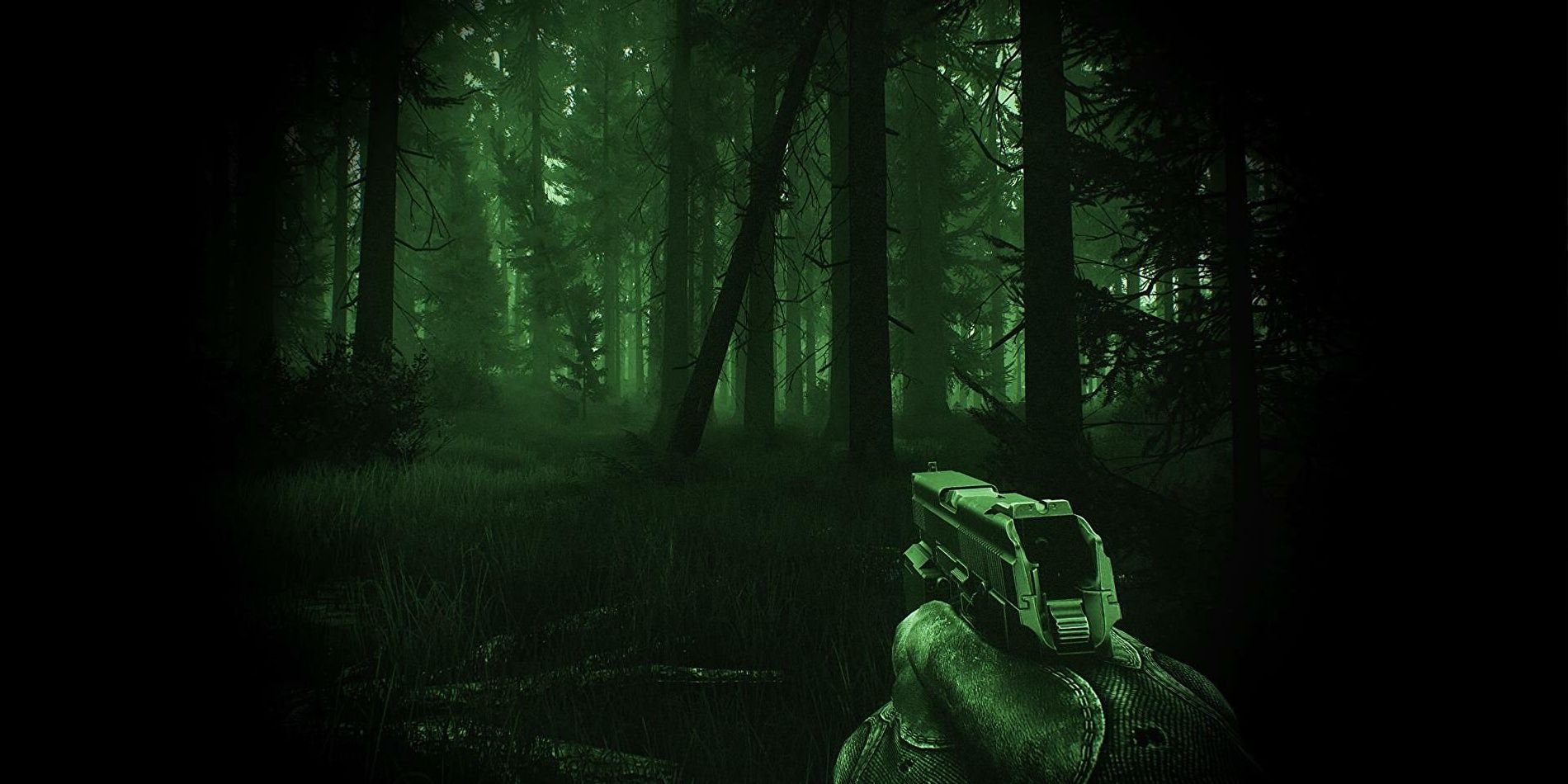 Escape from Tarkov features multiple different NVGs. Since this is an online shooter where you have to buy equipment with limited funds, both the price and the quality of these NVGs become a trade-off. For example, the GPNVG-18 set offers the clearest vision but comes at a hefty price. The PNV-10T is the cheapest set, but you lose a large part of your vision in turn.

More expensive goggles offer different color tints, such as blue. All in all, the customization that Escape from Tarkov offers is plentiful, and the amount of money you are willing to put down for a set remains subjective. 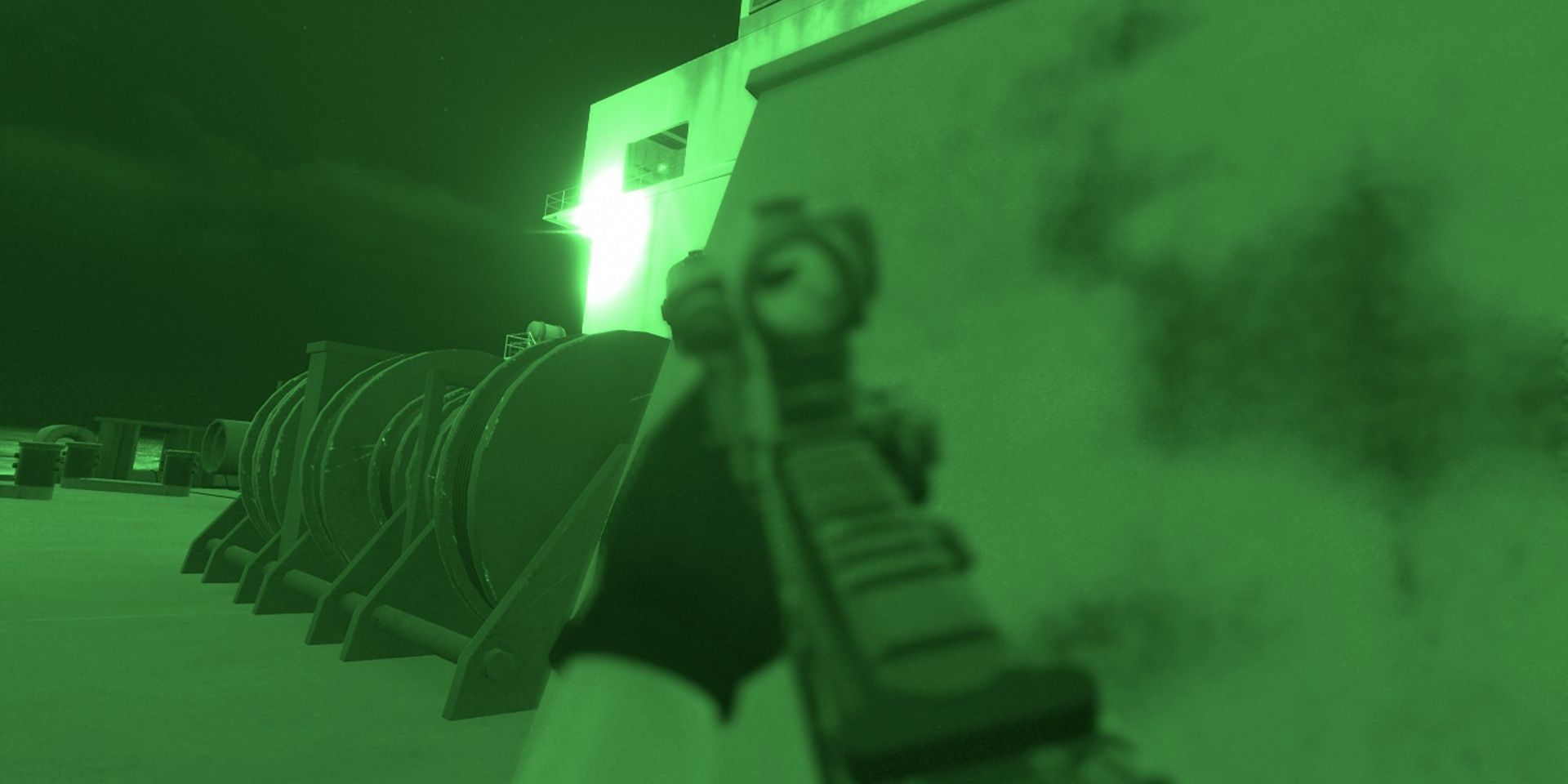 Ground Branch is a bit of an underrated game. While Ready or Not can be seen as the successor to SWAT IV, Ground Branch is closer to Rainbow Six 3 Raven Shield. It is a very challenging game and this also becomes evident through its use of night vision.

You have the choice between NVGs that severely limits your field of vision, or using weapons with a night vision scope, but then everything else will still be pitch black. In this unforgiving game, you only want to use NVGs when it absolutely benefits you. In addition, do not make the mistake of thinking that enemies will be blind in the dark. If your reaction speed is slow or if you rush in carelessly, they will still shoot you just as easily. 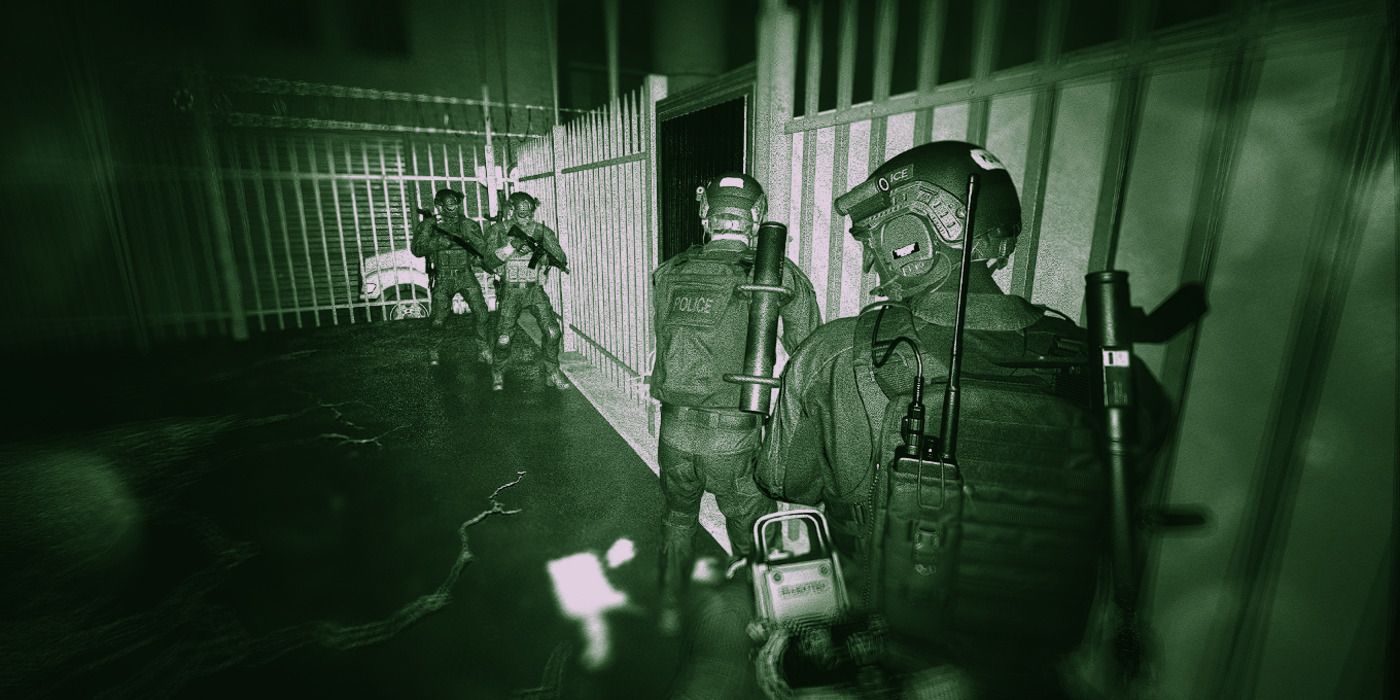 Almost every promotional screenshot of Ready or Not features a nighttime setting or dark interior. It should come as no surprise then that night vision goggles play a prominent role in this game. In a game where you have to defuse situations and arrest hostiles, rather than shoot them, you need every advantage you can get.

In an update in January 2022, the NVG received a visual overhaul. Light sources now do not blind you as much and the color is more white rather than green. The result is a very clean-looking night vision, that certainly adds another layer to the already excellent atmosphere of Ready or Not. 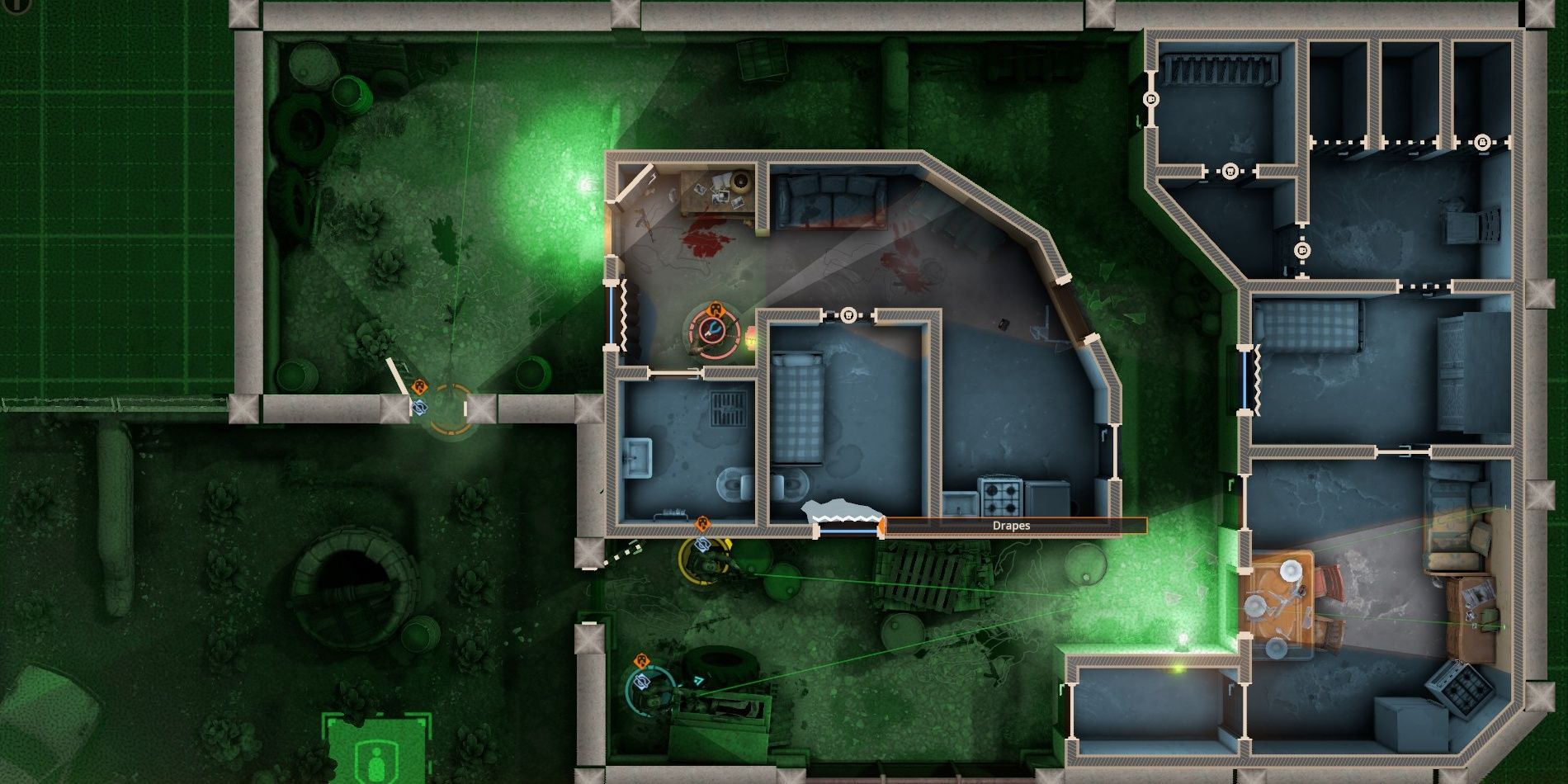 Door Kickers 2 is a top-down tactical shooter that is all about room clearing. In some of its maps, it makes inventive use of night vision. Enemies will have a harder time spotting you, and you can sabotage fuse boxes to turn off the electricity inside buildings.

When the stakes are high, and you need to rescue hostages being held at gunpoint, doing so in the dark and with night vision goggles and lasers might just give you the edge that you need. 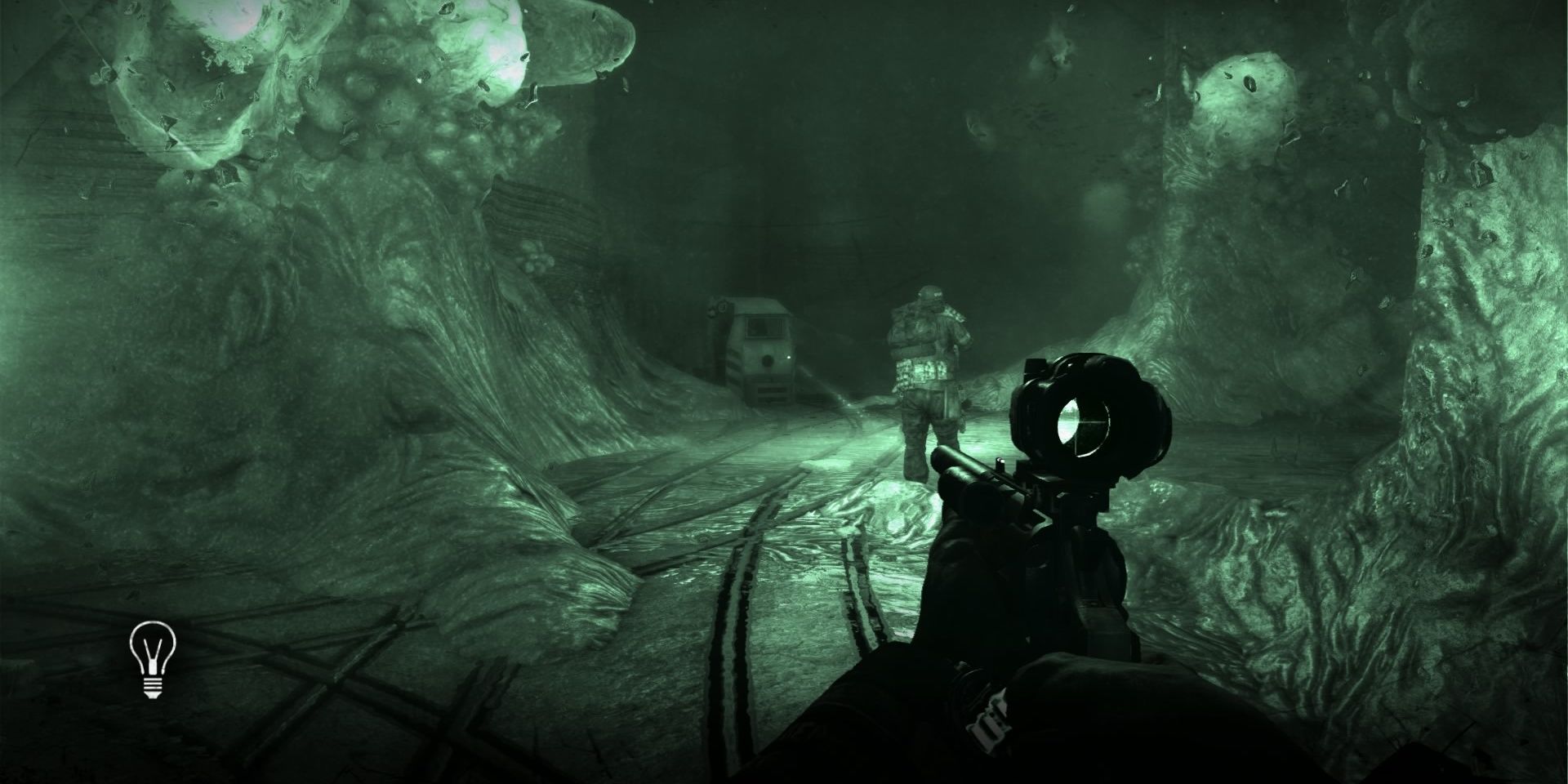 Night vision plays a role in each game in the Metro series, although the implementation has been updated slightly. For example, the first game Metro 2033 allows you to use NVG and a flashlight together, while in Metro: Last Light this is removed, and instead you can use an infrared spotlight.

Using night-vision makes it so that using a weapon with a scope becomes very difficult. It also limits your peripheral vision, so when stealth is not needed, it may be preferable to simply use a flashlight instead to light up those dark tunnels. 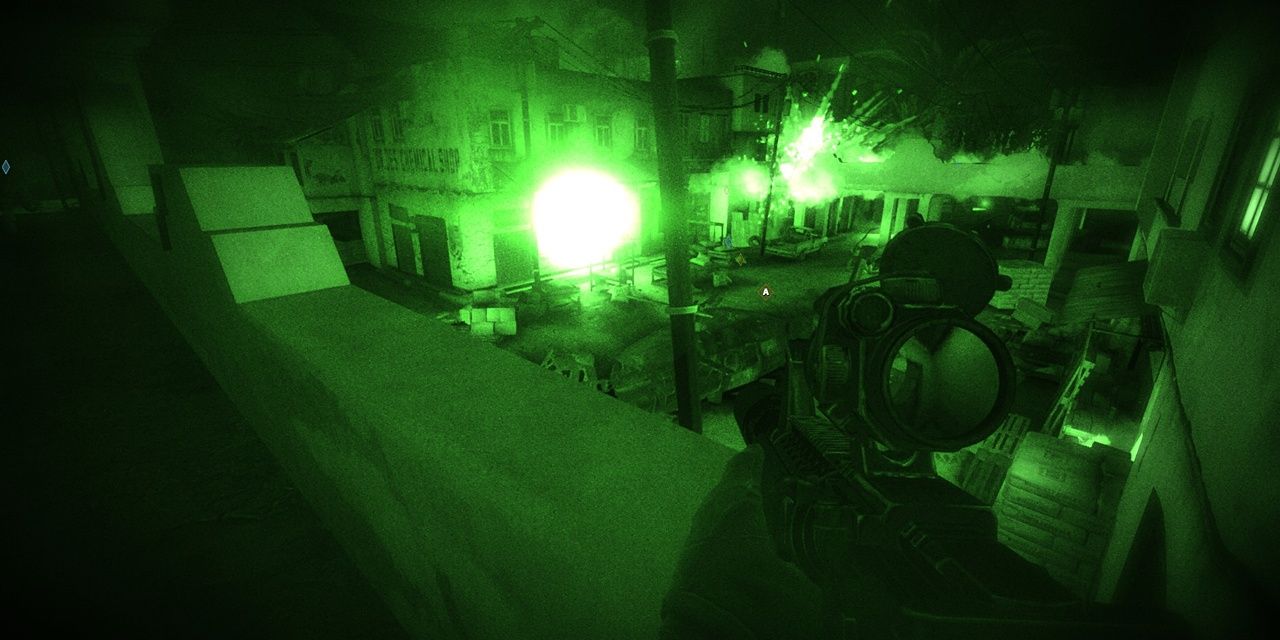 Both Insurgency and Insurgency: Sandstorm feature maps that take place at night and make using night vision goggles almost mandatory. A fun feature in Insurgency is that the quality of your night vision goggles depends on the faction you are playing as. If you play as the Insurgents, you will get lower quality NVGs, while the special forces get high-quality gear.

In practice, this means your vision will be a bit more grainy with the lower quality gear. Switching between different color filters, such as amber or green, is another fun feature that impacts your vision and the effect of light sources on your vision. 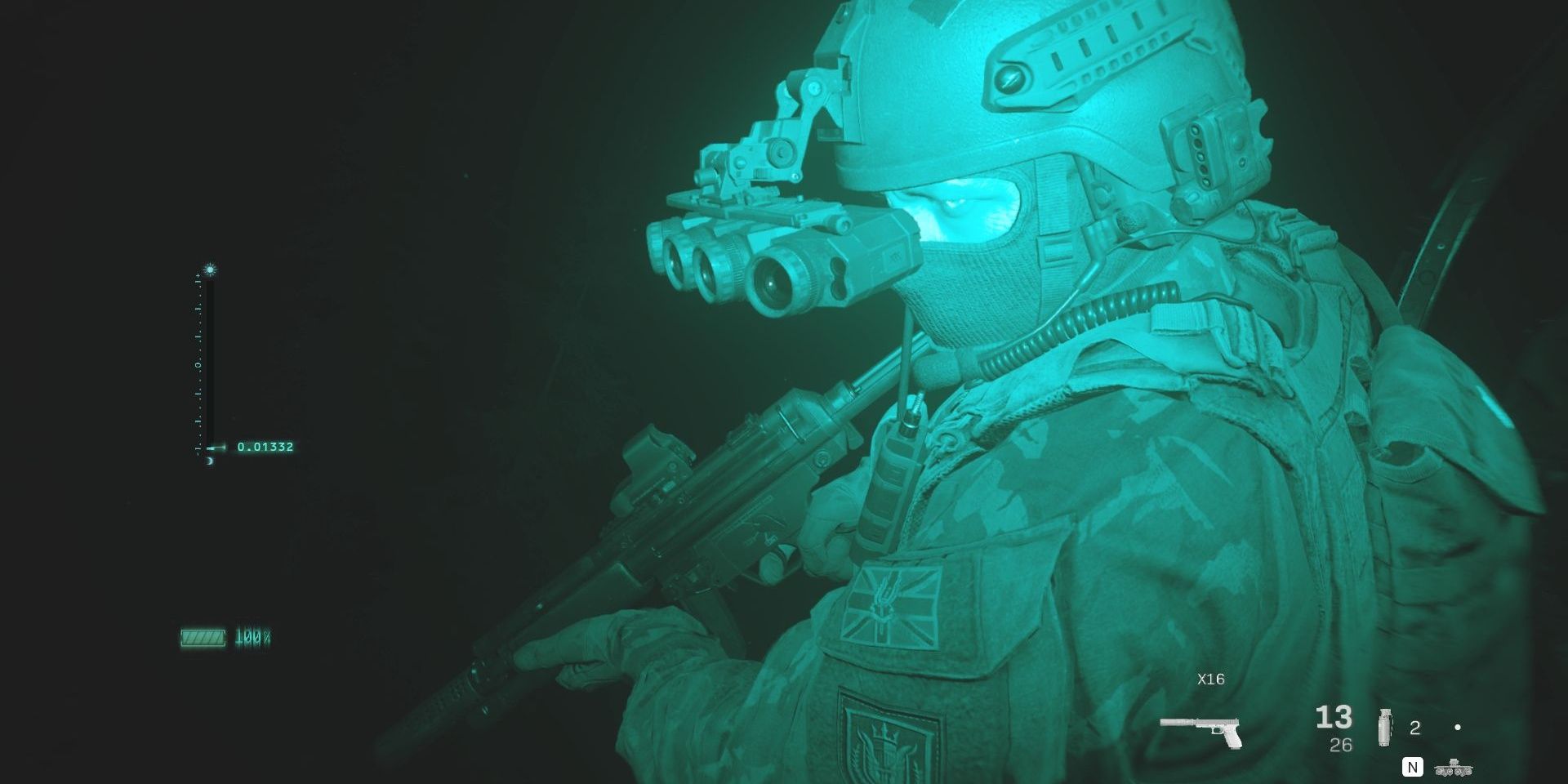 Call of Duty: Modern Warfare's 13th mission is fittingly named 'Going Dark' and features a night raid on an estate. From IR lasers to turning off the power and avoiding floodlights, the entire mission is structured around your night vision goggles as a central concept.

Compared to the original Modern Warfare game from 2007, the night vision now has a more blueish tint rather than green. It also feels less like a gimmick, especially since some areas are now so dark that you really need night vision. Another fun addition is that while using NVG, you cannot properly aim down the sights of your weapon and have to rely on your IR laser, just like in real life. 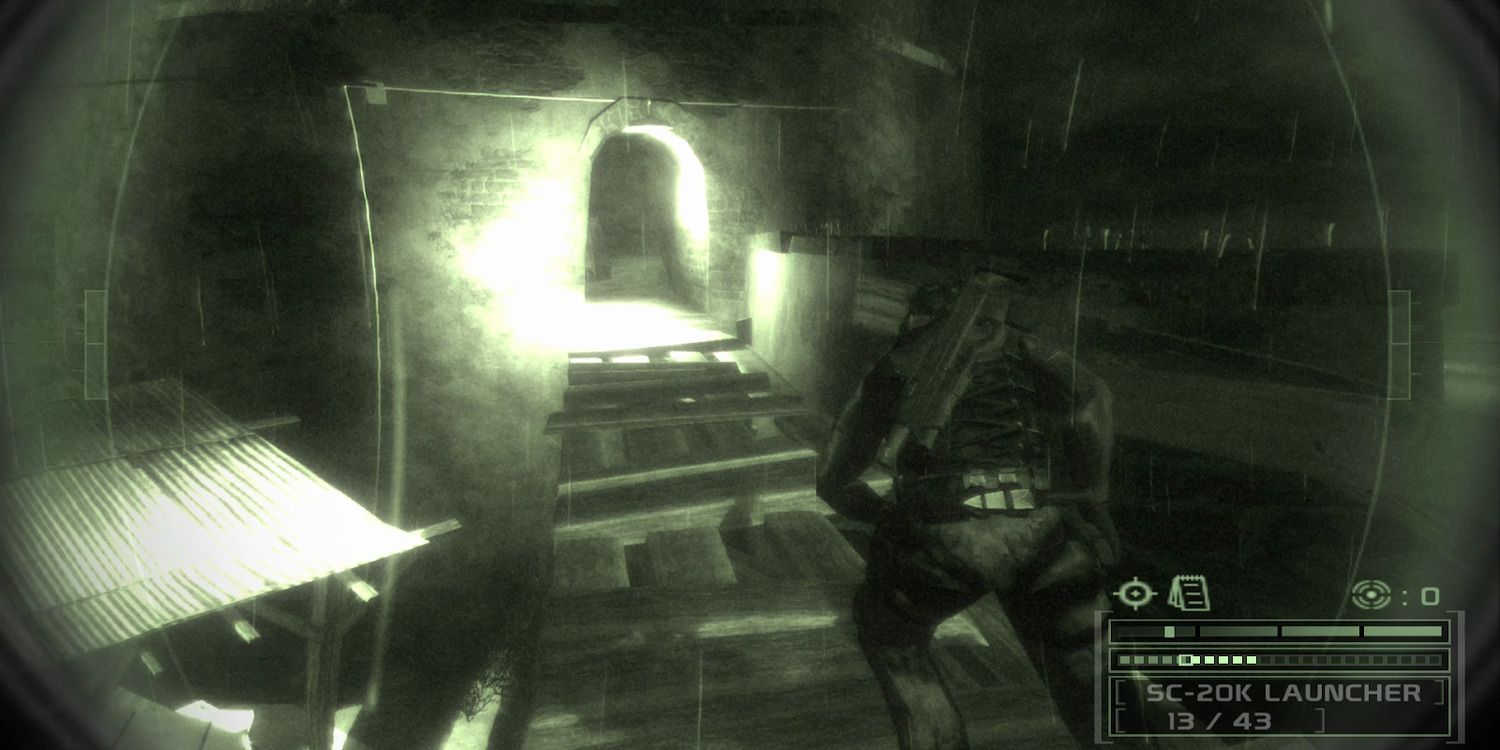 Sam Fisher with his night-vision goggles became the classic image of the Splinter Cell series. The best game in it remains Chaos Theory (2005), which also happens to be the title that implements night vision most aptly. Chaos Theory introduced the green filter and also featured bright lights that would blind or distort the player's vision.

Apart from night vision, Sam's goggles also could use thermal vision, showing body heat, and even electromagnetic field and electronically enhanced vision. This made for a fun gameplay element where you had to continually switch to the right vision mode of your goggles while sneaking around and avoiding enemies. 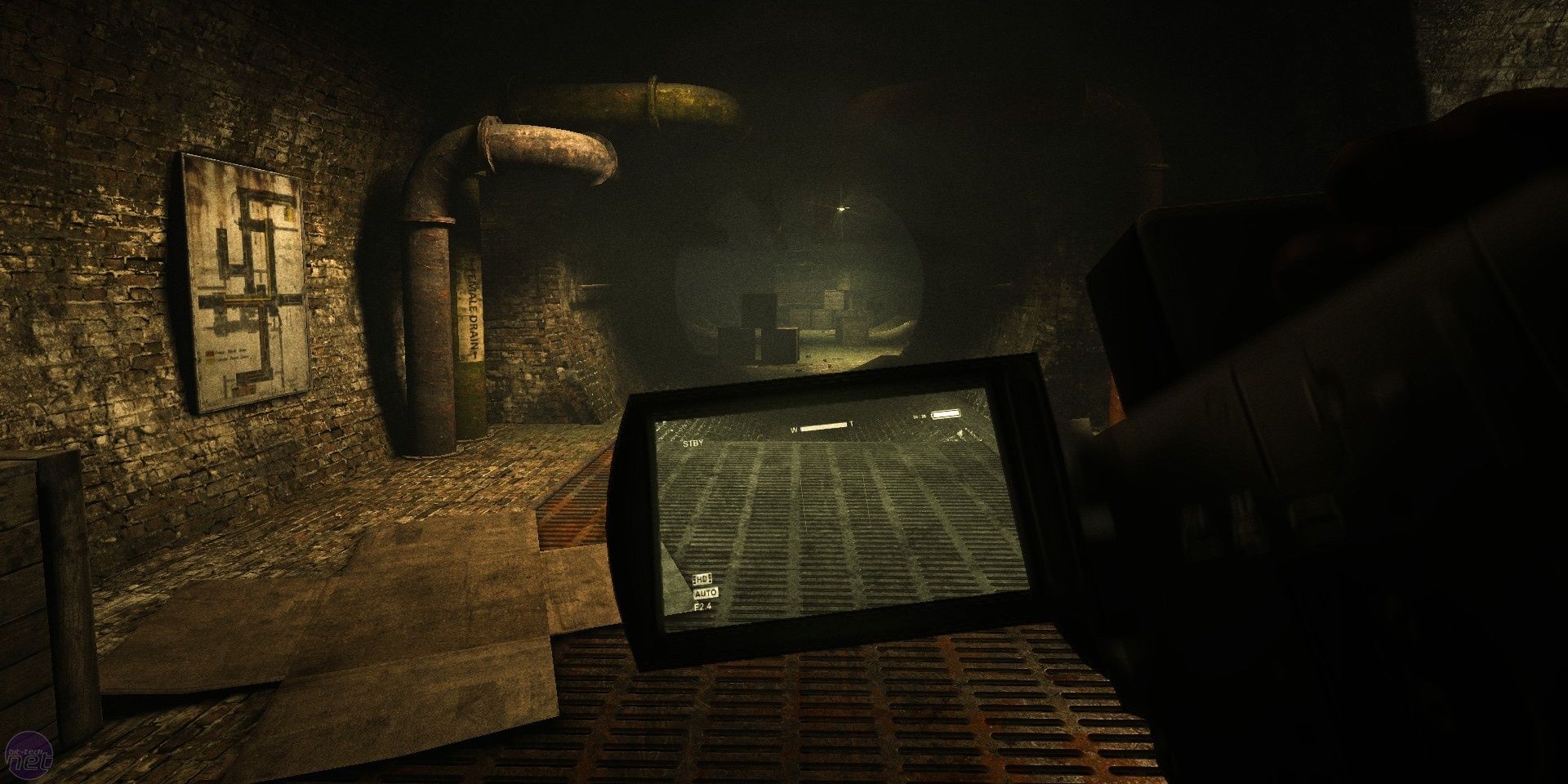 A horror game cannot be absent from this list and no horror game used night vision better than Outlast. You view the game world through a camcorder that has built-in night vision. You have to use this sparingly, however, since it will drain the battery.

If you are in a dark room, using night vision may just show you that a creepy monster is lurking in the corner. You could question, however, whether this is better than just not knowing what is there. For sure, night vision makes this game scarier, which can be a good or a bad thing, depending on how you look at it. 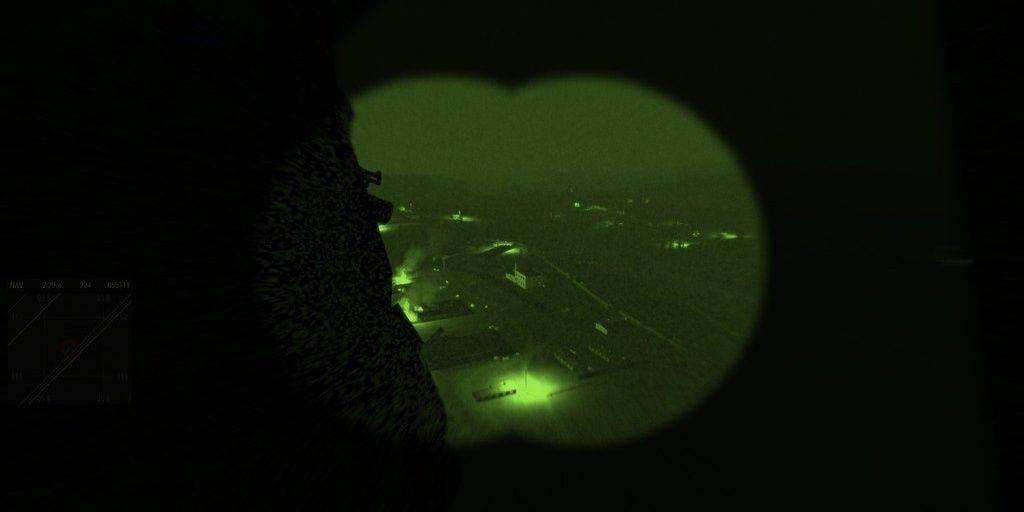 The Arma games have always implemented night vision well, but Arma III takes the crown, especially with the ACE 3 mod. The grainy vision matches real life very well. Instead of a magical green filter, you get a binocular image that alters between being somewhat useful to not being able to see anything.

However, the result is not only realistic but also fun. The benefit of night vision depends on your surroundings, light sources, the weather, and the quality of the goggles themselves. It is not a magical winning tool while your enemies stumble around blind, but it is still marginally better than not having NVG at all.