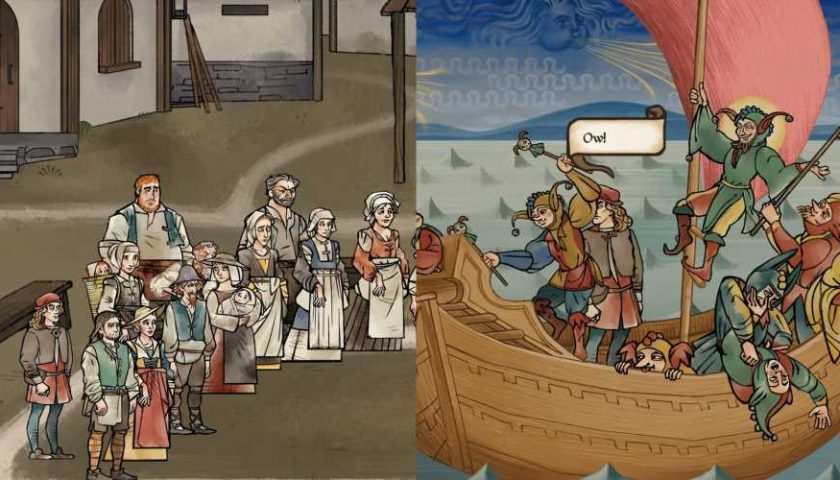 Pentiment brings the inner art geek and history buff out of us, and that's because of its medieval visuals and historically accurate representation of the era. The best part about the game is that you play as a man who isn't noble, but isn't entirely plebeian either: a perfect position to explore and observe the world. Through the eyes of Andreas Maller, a painter, you're able to see multiple perspectives without inherent bias for any.

There were many interesting things that Pentiment pulled from the history books, but here are some of the most interesting historical facts that the game was able to share with us.

11/11 Communication Between Nuns and Men Was Severely Limited 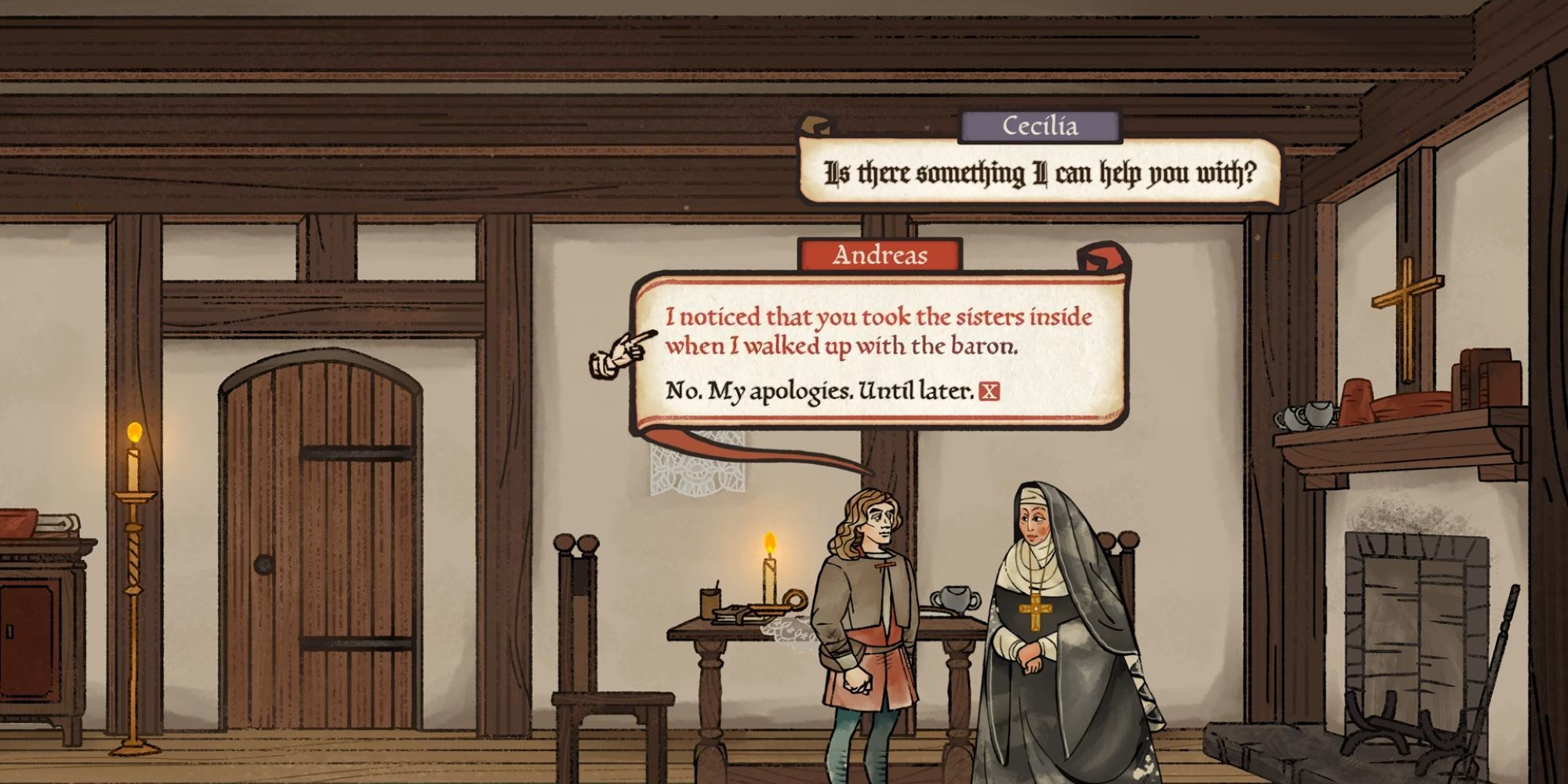 Sister Matilda makes us aware of this when we first try to talk to her as she arranges the flowers outside the convent. The Mother of the convent, in this case, Mother Cecilia, intends to limit the conversations between nuns and men unless it's absolutely necessary. Before this game, you might've thought that nuns were not subject to such strict rules in medieval Bavaria. It was heavily implied in the game that this communication between men and nuns was limited so that unwanted attention wasn't attracted.

But that doesn't really stop the rest of the nuns from conversing, and even having funny dialogues with Andreas.

10/11 Education Was Centered Around Catholic Logic 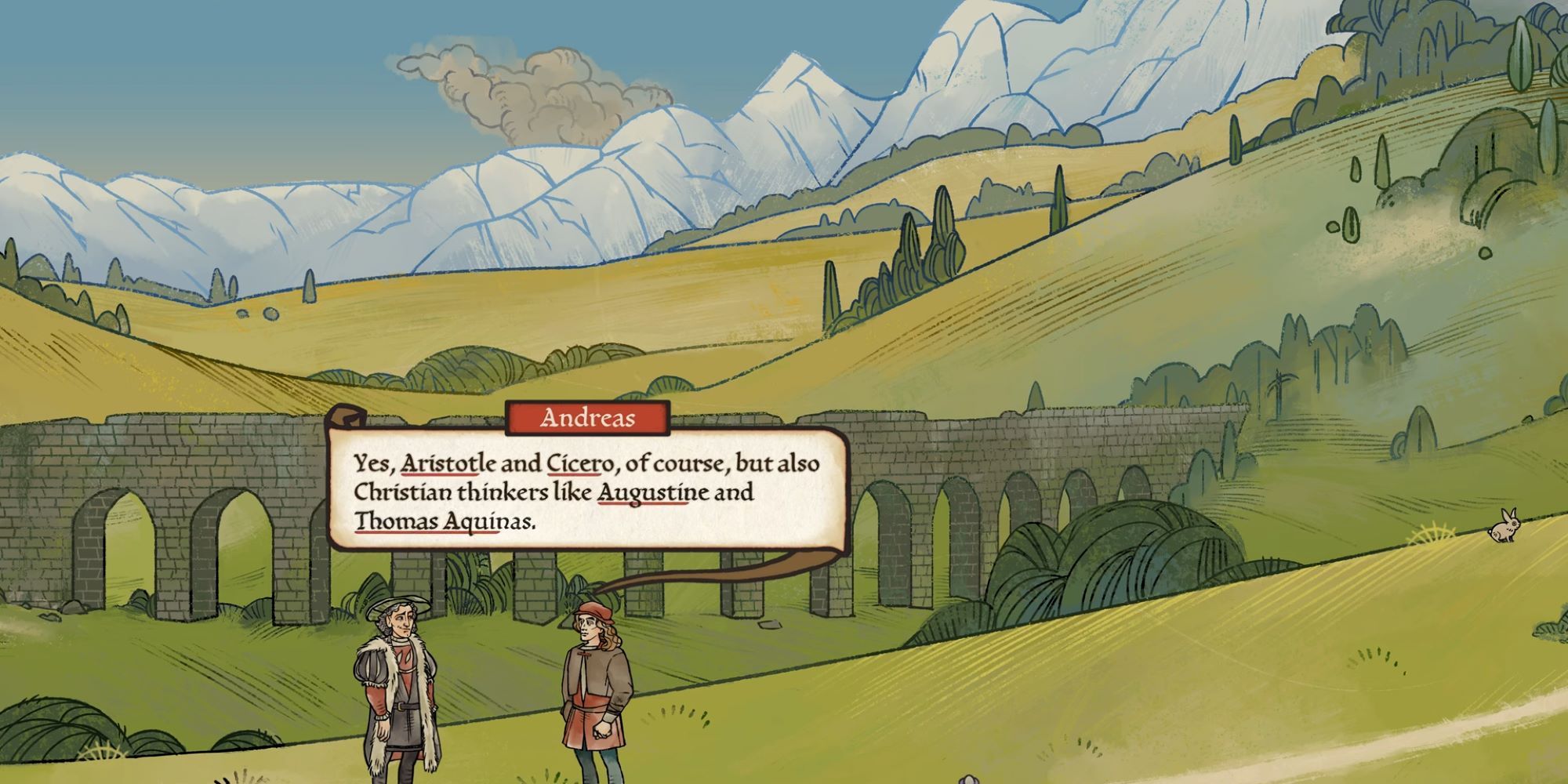 Baron Lorenz talked about how these men had to wrestle against the might of The Church at the time to get their ideas through, and even offered commentary on how education had to be in line with the Church's logic. This conversation opened our understanding to how much control the Catholic Church once had over Europe, to the point that even reason had to coincide with faith. We see how the Catholic Church censored education to their favor at this time, especially when the writings of Martin Luther were mentioned.

Even the mention of the 95 Theses written by Martin Luther, which was a criticism against the Catholic Church's ways, was not welcomed in discussion by Father Gernot, even when an educated nobleman brought it up. 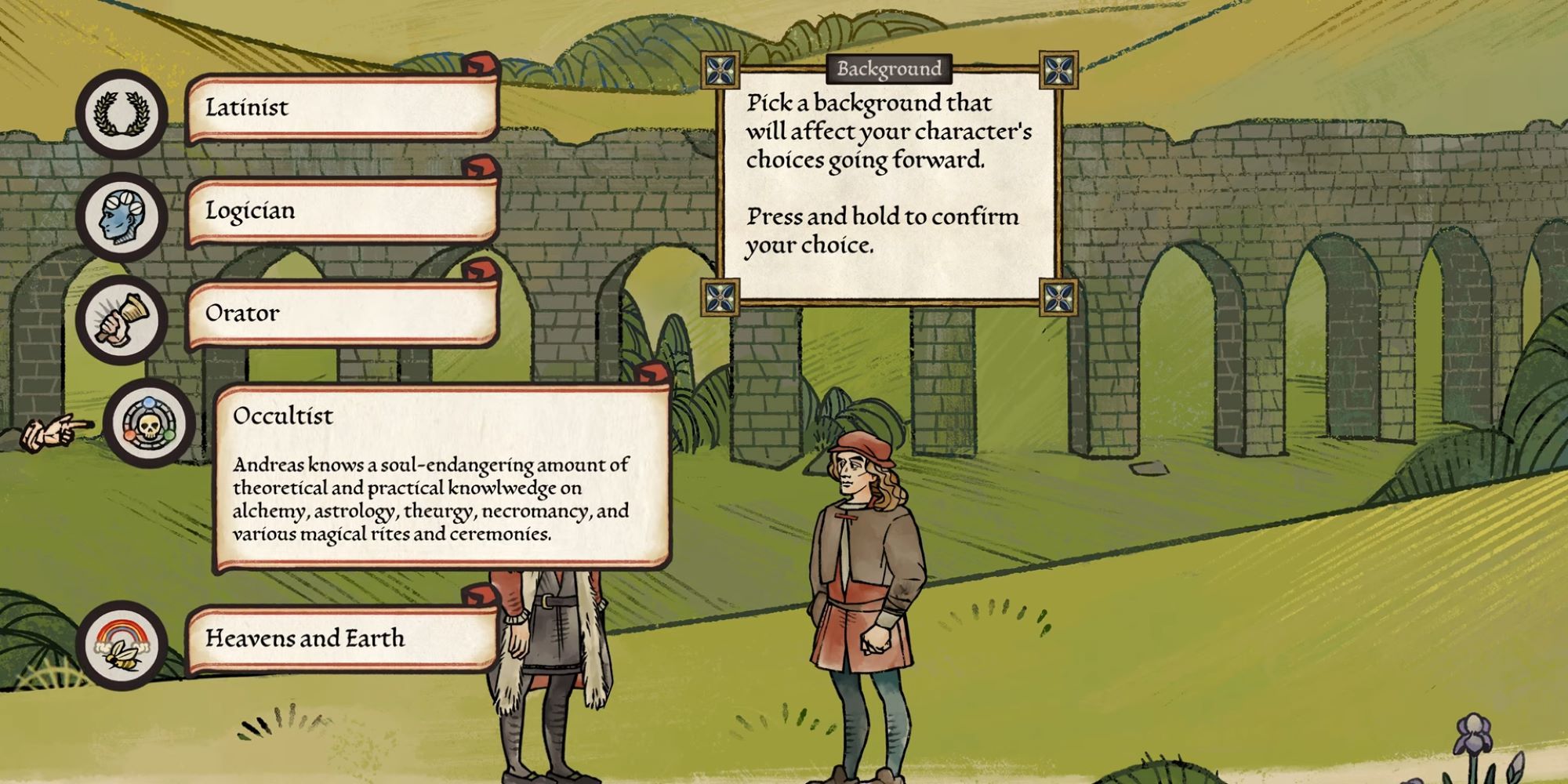 In fact, it was even a choice for you to expose yourself to such knowledge at your disposal. At what cost? You won't know until you play that route, but rest assured, it's all in good faith (or so you'd like to assert). But it was natural for astrology and even alchemy to be subjects in medieval education.

Although the study of necromancy is out of the question since education was heavily regulated by the Catholic Church, it's interesting to see how the study of the stars wasn't banned at the time. 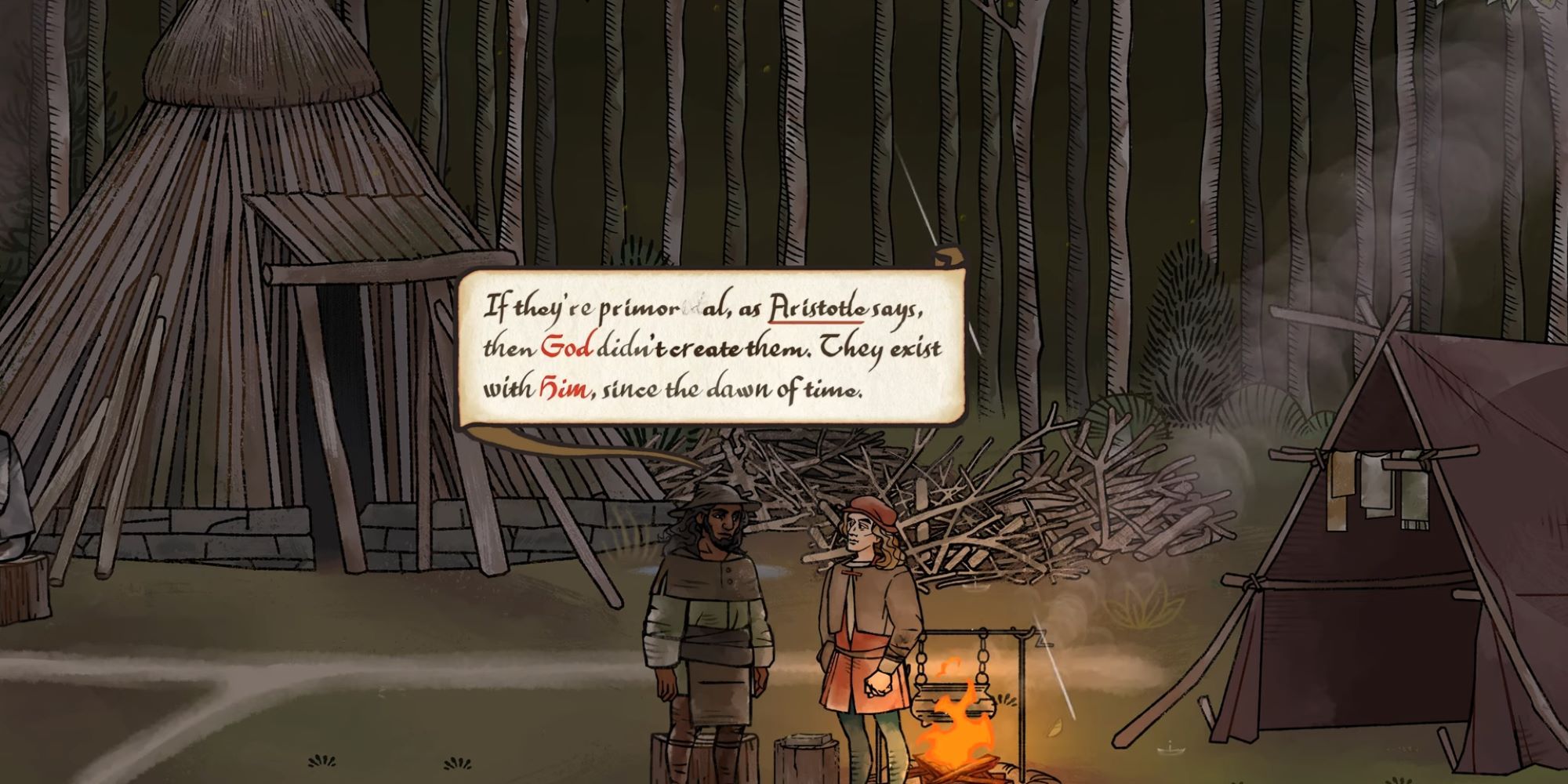 Vacslav brought up the idea that God must have created the universe with the elements, therefore, the elements would have existed even before Creation. This is an idea that isn't widely accepted by the Church at the time. You even have the option to respond to Vacslav's idea in the form of warning him for his safety since this idea might get him in trouble. Other than the fact that ideas such as this existed despite the persistence of the Church to censor knowledge to their favor, it was also clear that Vacslav wasn't treated fairly.

He was not allowed access to books that would further this theory because of his background.

7/11 Debates Are Welcome, As Long As They Don't Offend The Church 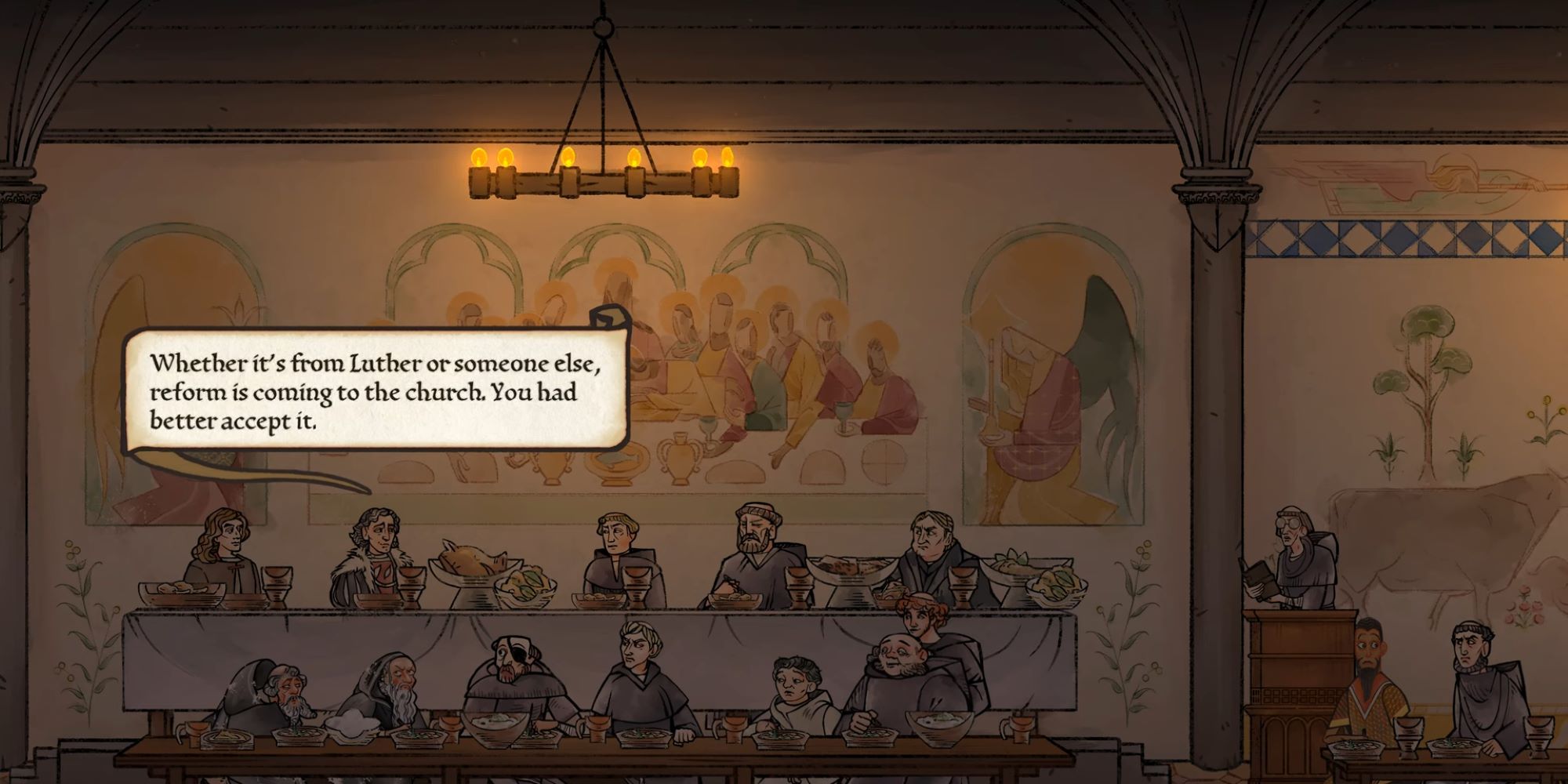 The 95 Theses were a controversial script released by Martin Luther, and they primarily criticized the sale of indulgences in exchange for salvation. Even the Baron Lorenz Rothvogel couldn't escape the ire of Father Gernot, who represents a force of conservatism of Catholic tradition. By debates being welcome, it means, they're not welcome at all if it challenges the way the Church runs the institution or its traditions.

This imposition of faith was also evident throughout the game, when it was found that Tassing was initially pagan when you speak to several NPCs about its history. 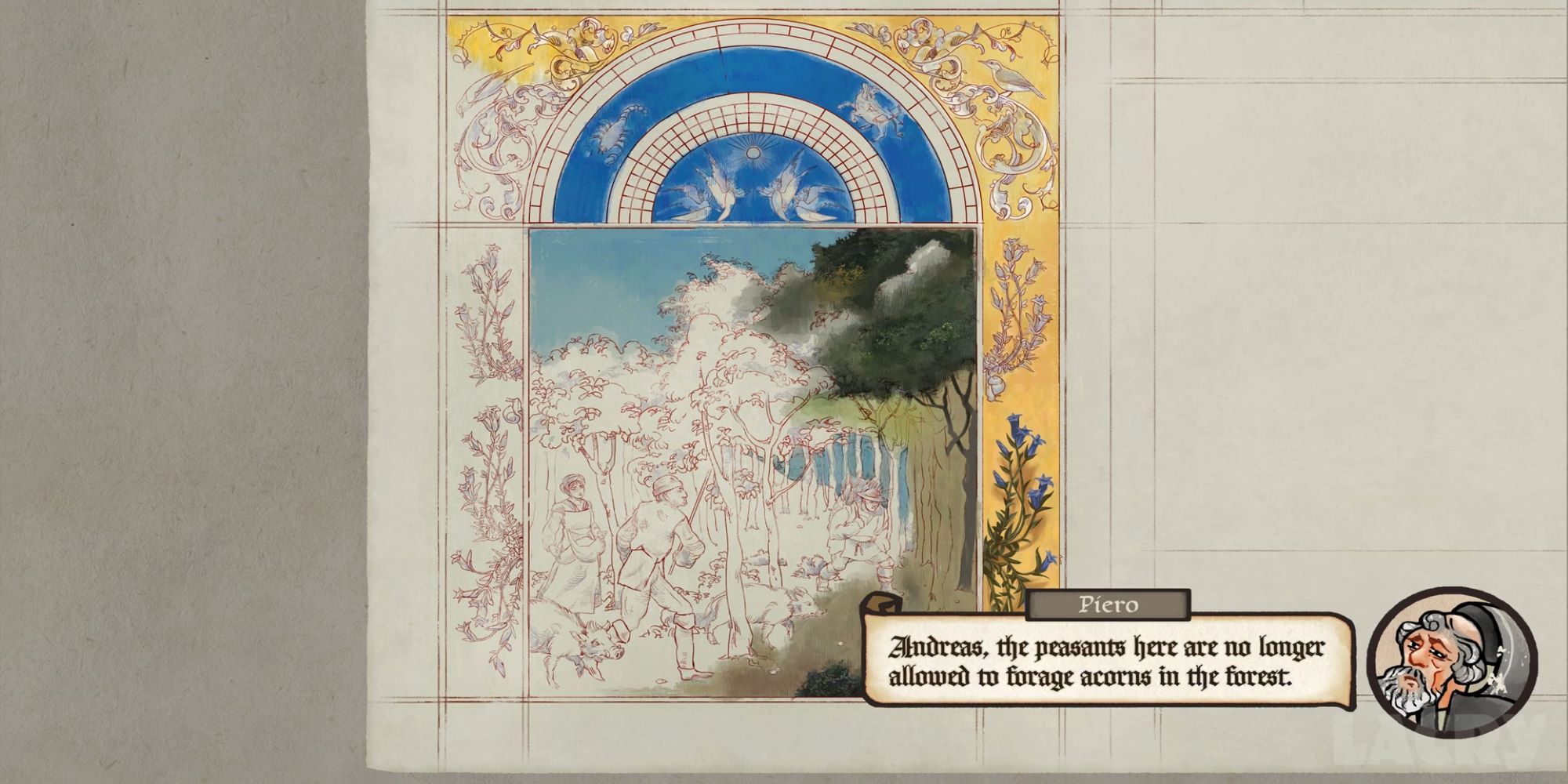 Lords and The Church, the owners of various lands, can choose whether to permit the peasants to forage there. Some of these lands are plots of forests, and even if the people who were inhabitants of the area have traditionally been foraging during spring, this can be stopped by feudal lords and Church officials who have the authority over the property. This caused much anger from many of the other characters you get to interact with in the game.

Their anger is rooted in the fact that much of the resources in the forest are hoarded from them, who need these as basics for survival.

5/11 Those With Power Can Choose Their Lands 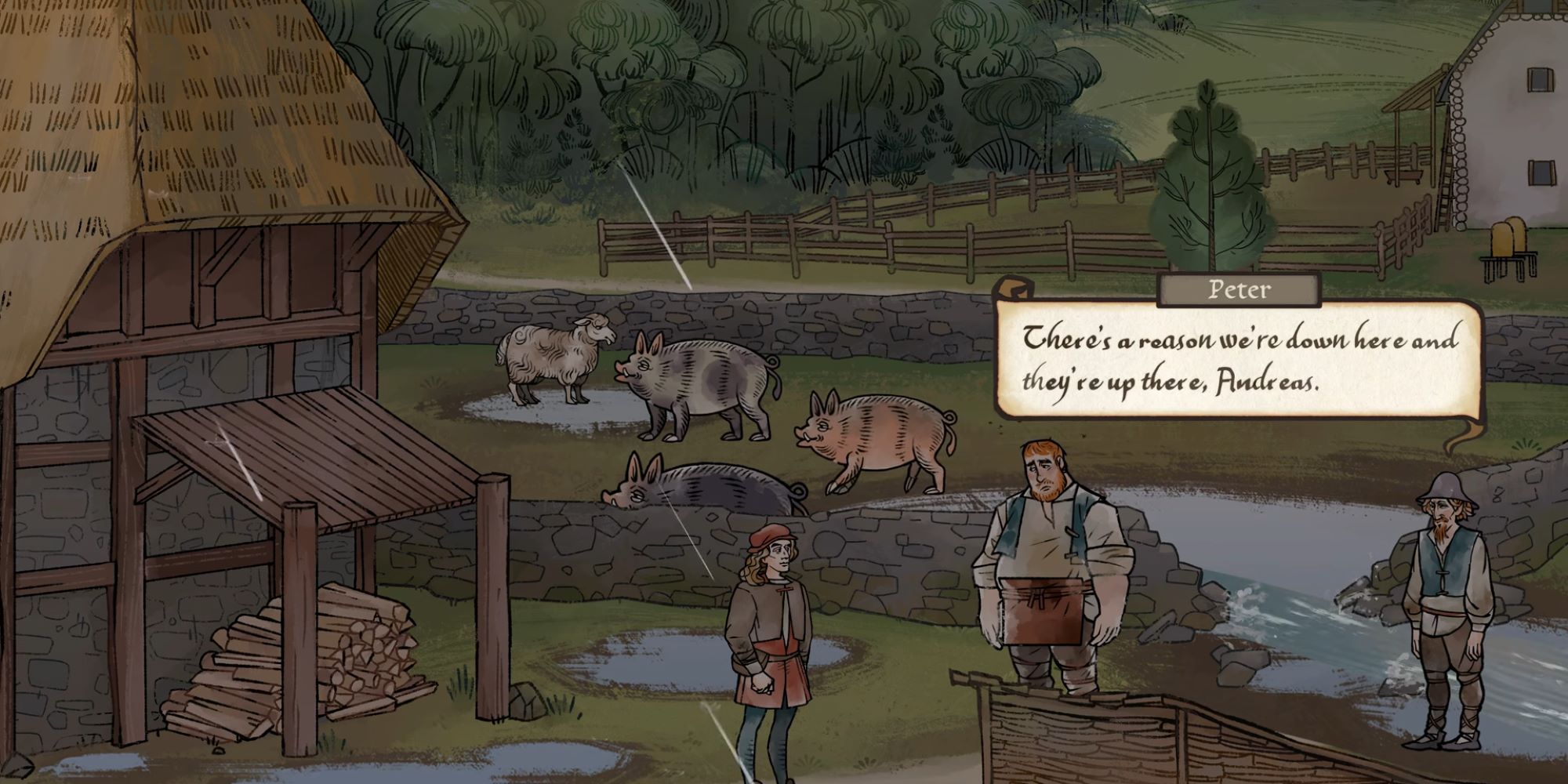 If you dine with the Gertners, you'll know what Peter's sentiments are regarding the Church and the Miller. He's not fond of them, and that's because they have control over how much they would end up earning due to rent and milling prices. But what we take away from this particular entry is that the reason why the Church is located at a higher plot of land is to keep it from flooding, and they had the ability to decide upon that since they do control the lands and rents around Tassing. This is presumably true in other countries that are under the influence of the Church.

This is also a point of concern upon your first encounter with Peter's wife, when she asks you to pay in advance in order to offset their late rent payments to the Abbey. 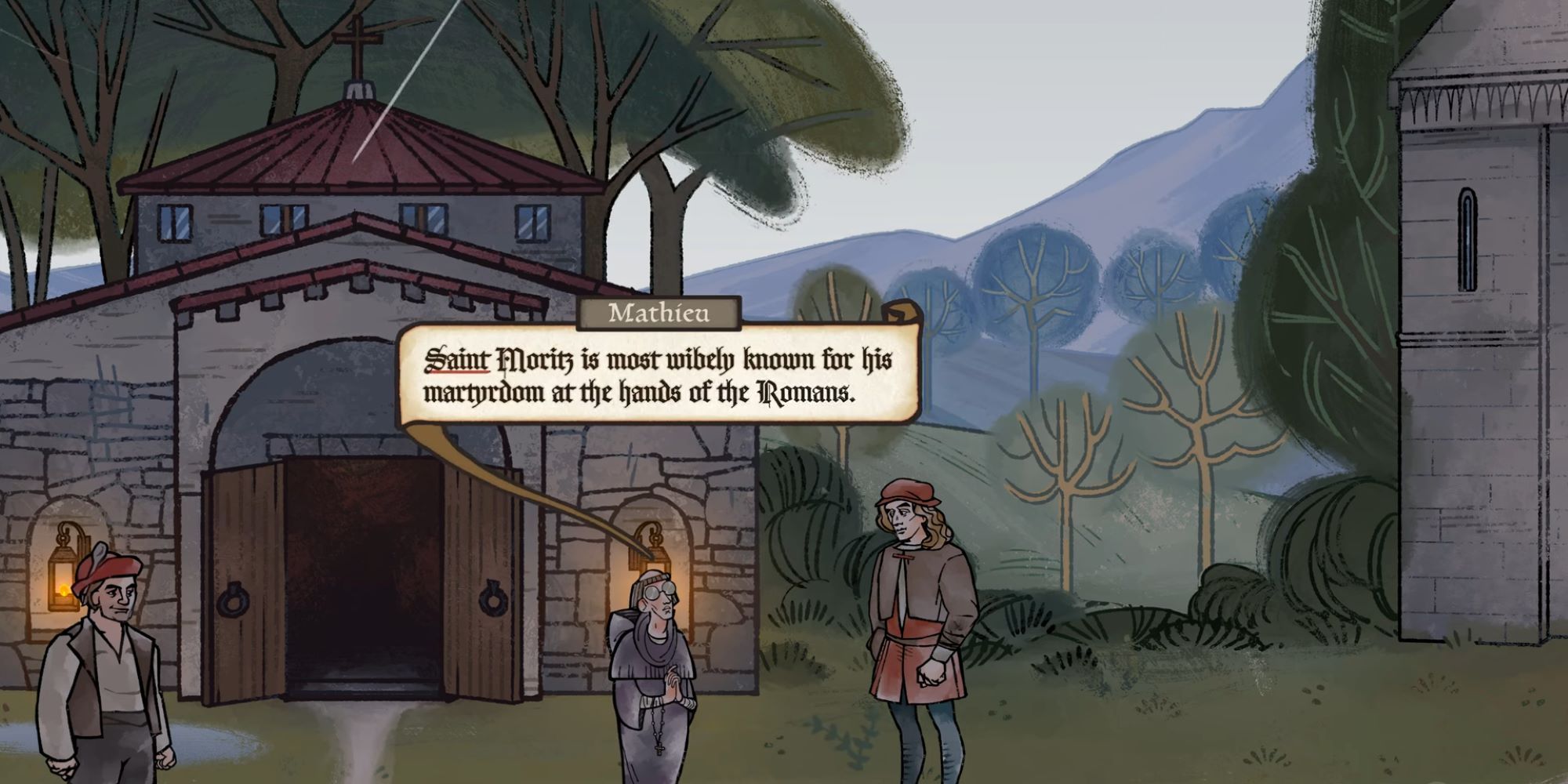 Saint Moritz is a real saint, although appropriated in the game by the town of Tassing. The Saint was a Roman soldier and rose through the ranks to become the commander of a legion. His legion was composed of Christians, including himself. Saint Moritz was martyred for not just refusing to worship pagan gods, but also for standing up for fellow Christians by defying orders that commanded the harassment of Christians. In the game, it was told that he protected a town of Christians from slaughter. 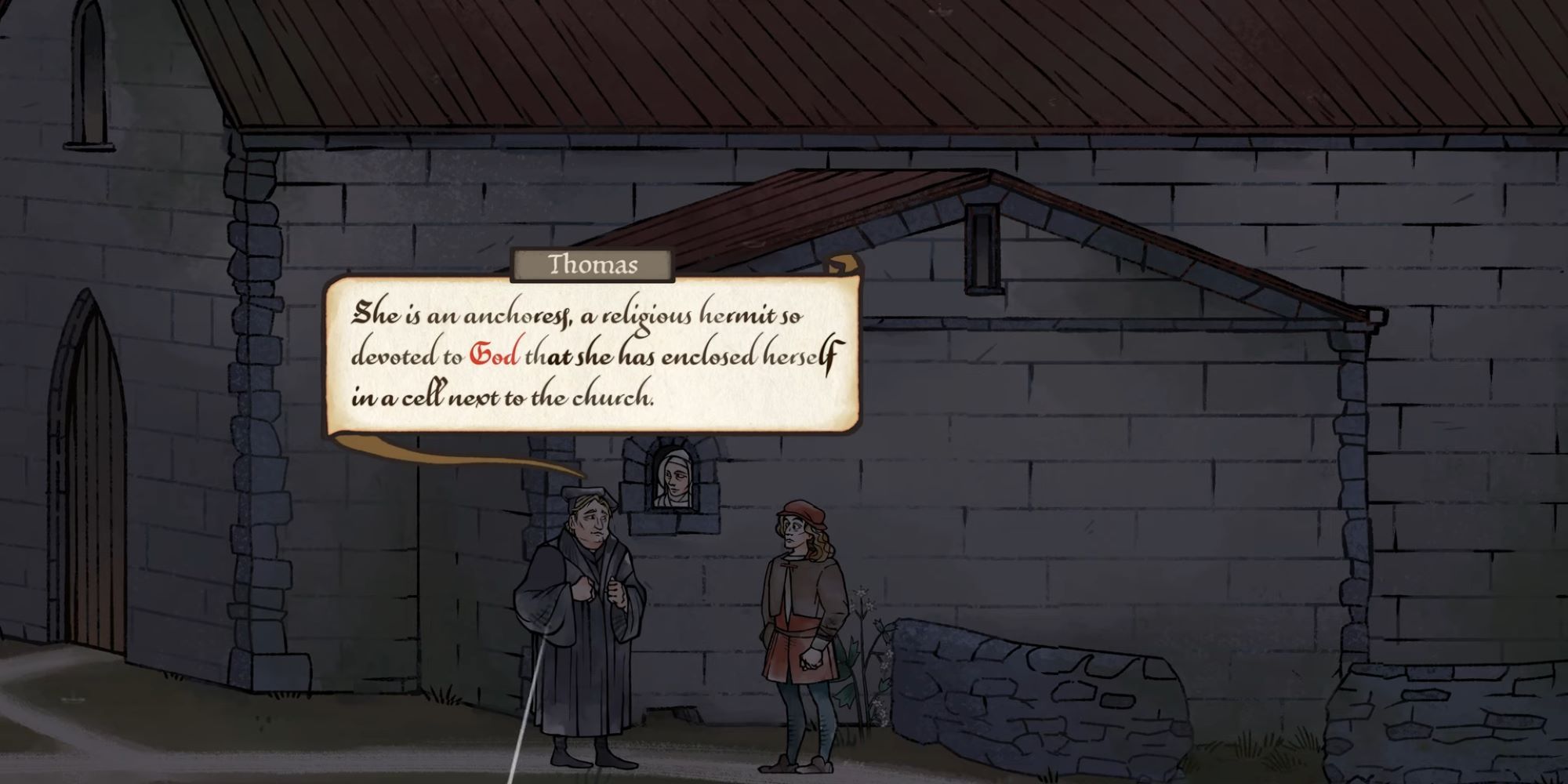 Sister Amalie is revealed to be an Anchoress, a person of great spiritual and mystic gifts believed to be given visions by God. These visions can be great, but they can also be frightening. In the game, Sister Amalie was able to predict the death of Baron Lorenz through her vision. You might've not encountered the term anchoress prior to this, since many with mystic capabilities were presumed to be frowned upon during the Middle Ages.

Which brings us the question, is there a difference between such anchoresses and witches? Either way, it's good to see that not all mystics were condemned at a time of little understanding regarding supernatural phenomenon.

2/11 Men Could Also Be Accused Of Witchcraft 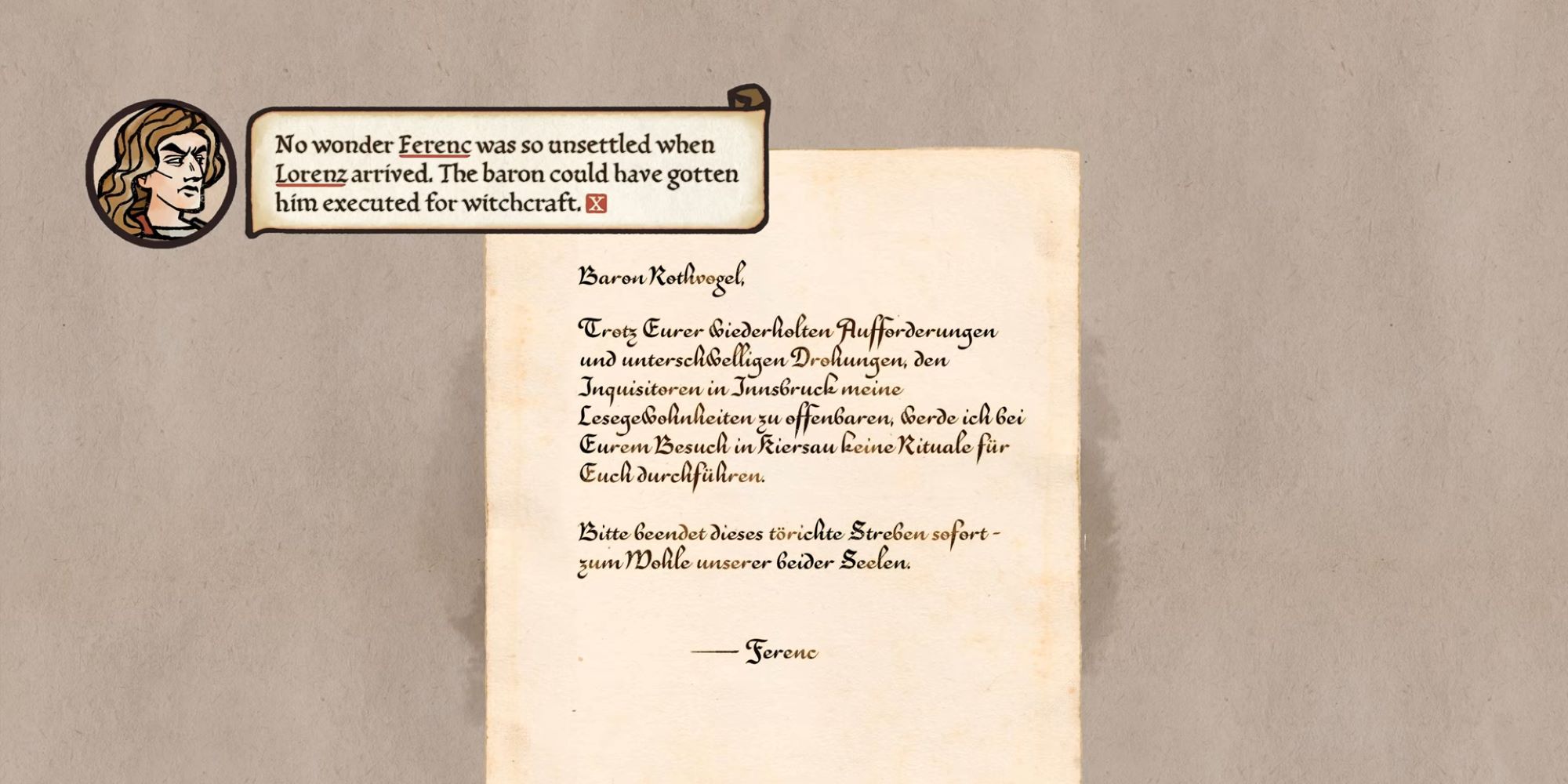 Most assume that all the victims of inquisitions regarding witchcraft were women, but men who are suspected to know a great deal of occultism, as well as dapple into mysticism, may be put on trial. If there is proof that the said person was involved in a ritual with magic, then it would be enough for them to get executed. At least, that's what the game showed us at a certain route. 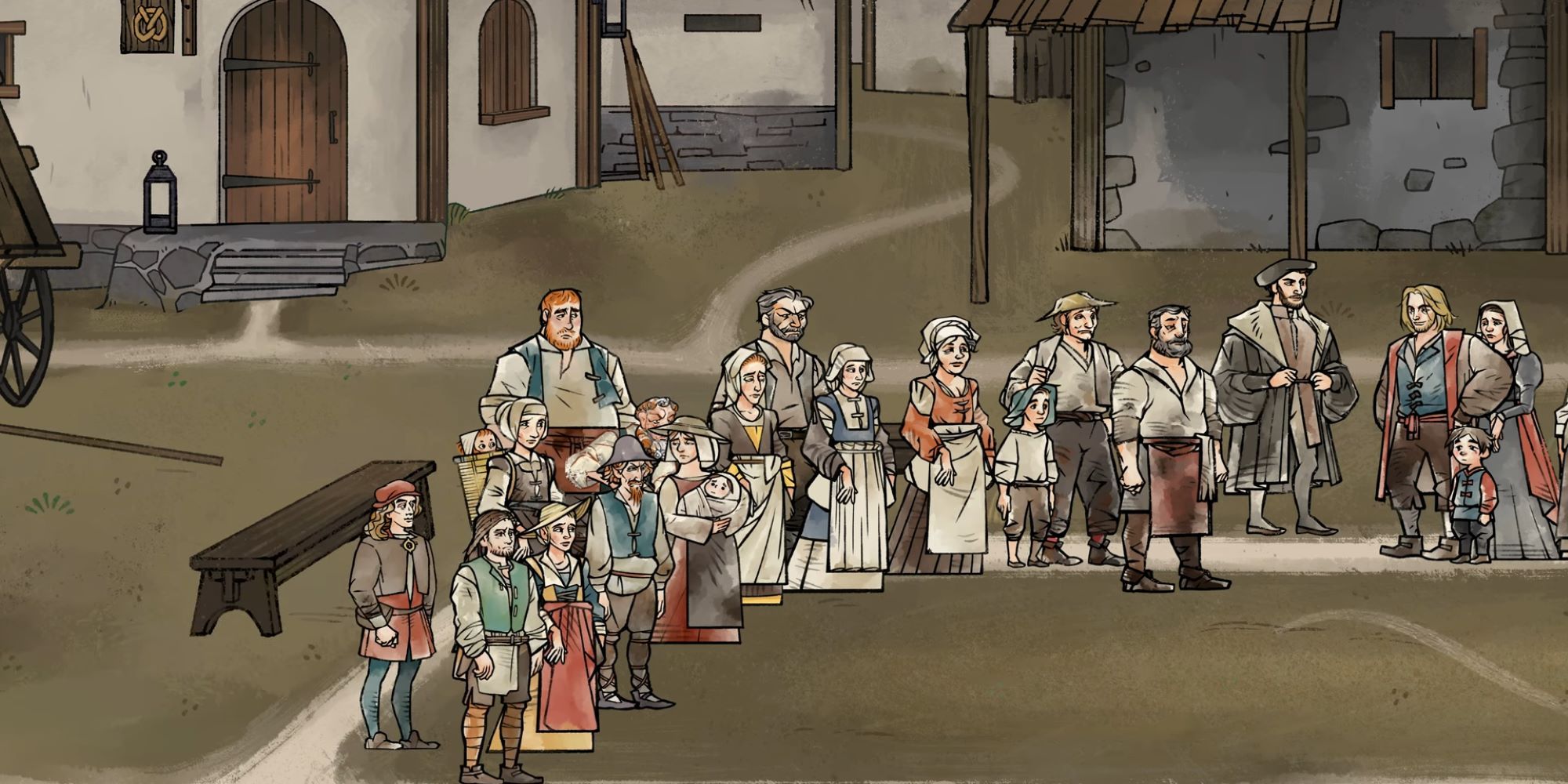 Depending on your choices, you'll witness a person who gets their head cut off by a sword having to receive multiple chops before it's severed completely. Although we're spared from the gore of seeing somebody's head rolling off, it's assumed that the executioner did swing their sword another time before the accused's head rolled away. If you thought executions were a clean strike to the neck, you'll be surprised that the human body can withstand such blows. Executions aren't a one-strike affair.