Who is the worst villain in gaming? Whatever clever answer you have is wrong. There is a truly malicious presence I must warn you about. That’s right, I’m talking about Austin the rat bastard butler from Gardenscapes and Homescapes.

If you’re not one of the millions of people who play Gardenscapes and Homescapes, you’d probably recognize how to play it immediately if you saw it. It’s a match-3 game, where players combine colorful tiles to earn points and clear missions. There’s also a visual novel element, where players use their completed levels to upgrade a series of gardens or homes.

That sounds so pleasant, right? No. Don’t believe that for a second. You see, Austin is a character who has only a thin veneer of humanity scraped over an endlessly hungry maw; a need for approval and domestic bliss. It’s a hell that has snared not just me, but my husband.

Mobile games continue to focus test and hone characters to appeal to a hardened demographic of players who download half a dozen of these games at a time and relentlessly cull them, only to download a new batch. These characters are often generically attractive and relentlessly plucky underdogs. Somehow, this process also managed to create Austin.

Gardenscapes seems much more innocent on the surface, but Homescapes immediately goes off the rails. The game begins with Austin visiting his elderly parents, who live in a massive mansion that they’re unable to maintain. His father has developed a case of PTSD after a car accident, and his mother is socially isolated while she struggles with the burden of being a caretaker.

When Austin returns home for a visit, and his parents casually mention that they intend to sell their home, Austin thinks back to his boyhood and yearns deeply for that feeling of domestic safety.

So he moves back in and begins a prolonged, passive-aggressive campaign to rebuild the house.

His parents repeatedly ask him to stop, and he pours thousands of his own dollars into renovations. Finally, they agree to keep the house. Is it out of joy, or are they terrified at what their son will do next? While they slept, he installed a massive fish tank and hired a local artist to carve busts of their ancestors. I wouldn’t know what to do if my son did that either.

Not only does Austin pressure his parents into keeping the house, but he brings me into the scheme as well. Every colorful cavalcade of match-3 combinations turns into stars, which I have to spend on Austin’s whims. When his father’s PTSD becomes too uncomfortable for Austin, he renovates his dad’s entire garage and custom car to ensure that his father is properly shamed and pressured into driving again. His mom is a little harsh a few times, so Austin recreates the garden of his parents’ first date in their front yard.

I’m forced to participate in this. “This is a normal thing to do,” Austin tells me. “Give me the stars. I need everything to be like I am a sweet child.” And when I finish a level, my husband and I stare at the screen as Austin smirks and claps his meaty hands together and barks a weird, seal-like “WOW.”

This kind of selfish funneling of resources is antithetical to what makes a healthy relationship work. When my husband sees me playing Homescapes, his brow furrows. “What’s Austin up to now?” he asks. I can tell he’s judging me for enabling Austin. He’s not wrong to do so.

Why is my husband so aware of Austin? Because I can’t stop updating him on recent developments. Metaphorically, I’m sharing spoiled milk and then asking him to smell the carton so I can confirm the spoiled milk is, in fact, gross. Humans were not meant to suffer alone, and so he has to come in on this too.

We mention Austin in this home regularly. I don’t know that there’s like, a normal amount of times to mention Austin the butler from Homescapes in a domestic arrangement, but we’ve definitely exceeded it long ago.

But how can we not? Forget Black Mirror, this is the real technological dystopia.

I finally gave up on the Scapes series of games after the lighthearted domestic-themed distraction got incredibly, weirdly racist. While Austin the butler is renovating the “Oriental” gardens, he decides he needs an expert. So he calls “Master Akira,” a man who speaks in Yoda-esque broken English, and it’s pretty bad!

Also, there are a lot of match-3 games. They’re not hard to find. I had just become attached to this particular game out of spite and spectacle.

Ever since I cleansed my phone of Austin’s malevolent presence, he lingers. He’s in my promoted tweets. He, and his pets, are sobbing, tears rolling down their swollen cheeks because I’ve left them. They beg me to come back. 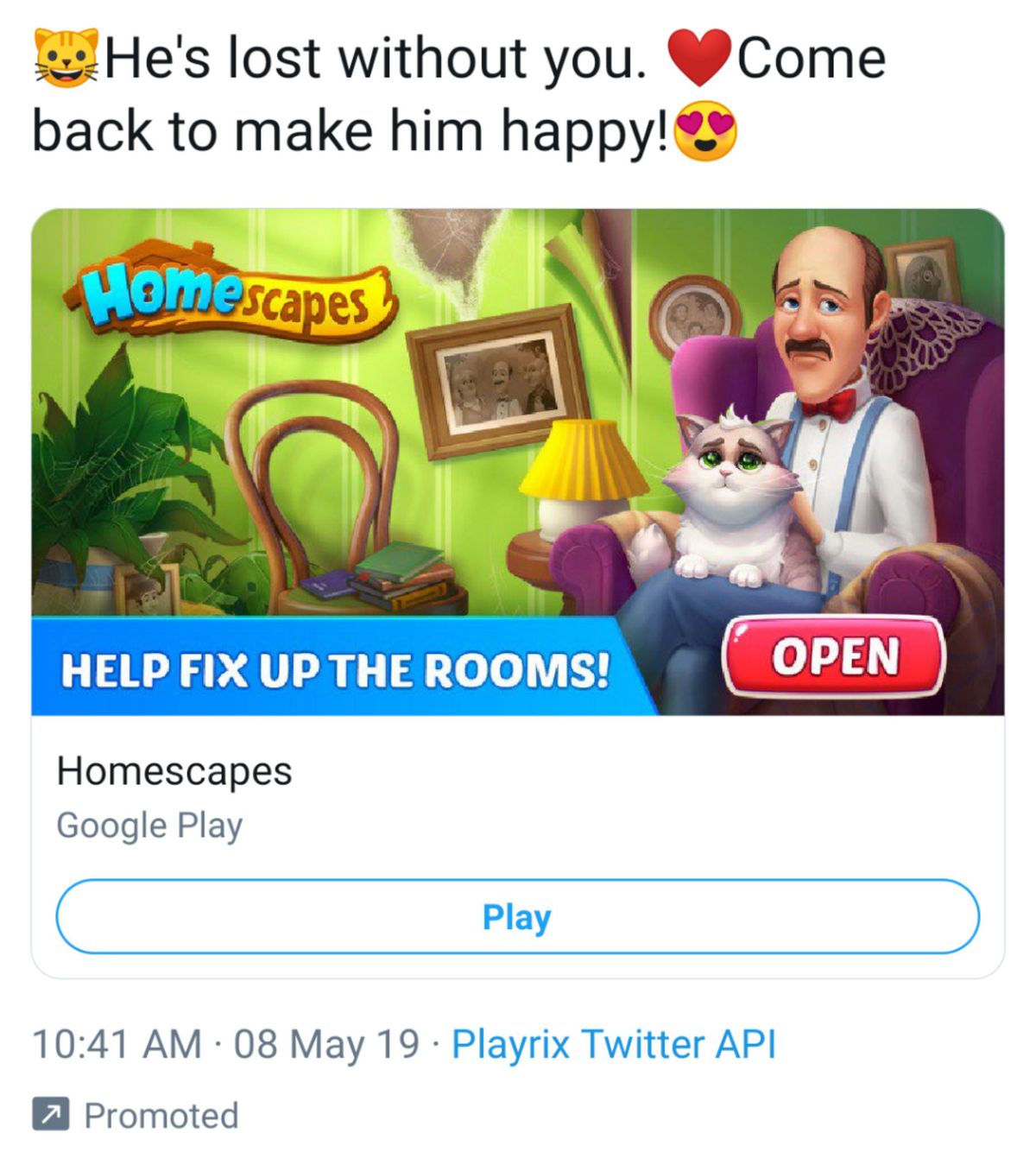 He’s on my Facebook, too. Mobile game marketing is becoming more and more absurd, with the vast majority of games showing an entirely different set of gameplay. The Scapes games do this as well; today I saw a Facebook ad showing a different Austin, in a different art style. He was standing and screaming over the corpse of his beloved. 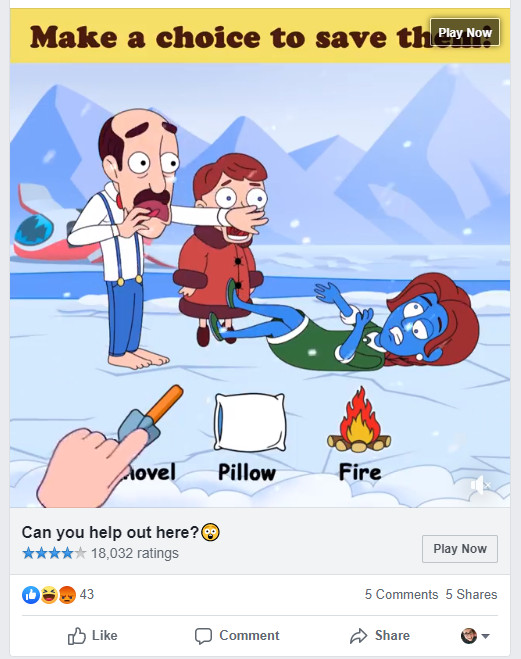 I just wanted to check my Facebook menchies.
Playrix Games

Honestly, the entire affair is so weird and concerning that I almost wonder if there’s a bot out there, churning out mobile game scripts based off data. If that’s the case, what does that say about mobile game protagonists? Have we iterated through so many relatable, increasingly appealing mobile mascots that we’ve come through the other side and now we’re getting characters like Austin, the charmless anchor of a man?

I don’t know the answer to any of these mysteries. All I know is that I have spent far too much time on a terrible game, and the consequences of my behavior is that I know about Austin the butler. I know he exists, and I know his crimes. And I’ve spread that contagion to the man I love most.

Oh no. Oh, God. In writing this… I’ve also spread it to you.