Heading into 2019, 5G performance was largely theoretical: Standards-compliant 5G networks and smartphones were still nascent if not months away, so carriers focused more on building and testing their networks than guaranteeing performance. But over the past year, carriers across the world have rolled out multiple 5G networks and devices, using a combination of lab tests and real-world user results to sharpen their initially soft marketing claims.

As we prepare to kick off 2020, 5G performance is concrete — or as close to concrete as we can get with a technology that will continue to improve for years after its initial release. Inspired by T-Mobile, multiple carriers have embraced a multi-tier 5G strategy that uses three types of radio signals to deliver cellular service to 5G devices: low, mid, and high band frequencies. Each tier has different characteristics.

If you want to understand how 5G will work where you live, this guide will make it clear. Up until last week, it wasn’t entirely clear how fast (or slow) all three 5G tiers will be in practice. But now that T-Mobile’s low band 5G network is widely available, we can pin down how the low, medium, and high bands will actually work together for 5G, and heading into 2020, that’s definitely worth understanding.

Cellular phones get their wireless communication abilities from tiny radios. Unlike a car radio, users don’t need to manually select “stations” such as 88.9FM or 1020AM to receive signals. Instead, cell phones’ radio tuners use lists of nearby radio towers, automatically selecting optimal radio frequencies to transmit calls, text messages, and data.

5G differs from prior cell phone standards in having a much wider radio dial than before, capable of tuning in many more types of frequencies — and multiple types of frequencies at the same time. To radically simplify the concept, imagine a pocket-sized TV with a left-to-right tuning dial listing channels 2 through 200. Tuned all the way to the left, all the TV will pick up is an audio signal. In the middle, it will find signals with both audio and video. And at the right, it will find signals that make the little TV display 3D holographic video and surround sound audio. In some areas, all you’ll be able to pick up is the audio signal, while in others, you’ll be able to get video or 3D video, too.

Old 4G phones were able to tune to the left and middle, but not the right. New 5G phones can either tune all three, or to the middle and right, but not the left.

The left side is called low band 5G, while the middle is known as mid band 5G, and the right is high and 5G. Understanding how 5G service works comes down to recognizing that all three bands are being used to deliver 5G service, each with its own combination of speed and range.

As shown in the photo above, T-Mobile has depicted the three types of signals as a layer cake. The red low band tier covers a lot of space, slowly, while the yellow mid band covers less space at faster speeds, and the red high band covers the least space at super-fast speeds.

In quick summary, the bands work as follows in the real world. One low band (600-700MHz) tower can cover up to a 1,000-mile radius with 5G service that ranges in speed from 30 to 250 Megabits per second (Mbps). A mid band (2.5/3.5GHz) tower covers a several-mile radius with 5G that currently ranges from 100 to 900Mbps. Last, a high band (millimeter wave/24-39GHz) tower covers a one-mile or lower radius while delivering roughly 1-3Gbps speeds. Each of these tiers will improve in performance over time.

Illustrated by the bottom cake layer, low band spectrum can also be understood as a “blanket layer” for nationwide coverage — it will provide a base, “doesn’t get any worse than this” level of 5G virtually everywhere in the United States, as well as in other countries with huge geographic areas requiring rapid 5G service. Transmitting on the 600MHz frequency once used for analog TV broadcasts, one low band 5G tower can serve customers within a radius of hundreds of square miles — possibly over one thousand miles — enabling coverage in even far-flung and rural locations.

The good news is that T-Mobile’s low band 5G peaks at somewhere in the neighborhood of 225 Megabits per second (Mbps), which is six to seven times faster than common 4G speeds in the United States today. When I tested T-Mobile’s network last week in Maui, Hawaii, a market where the carrier has quite a bit of 600MHz spectrum available for 5G, I peaked at 227Mbps outdoors, and was able to get over 100Mbps from inside my hotel room, both of which turned out to be fairly close to a T-Mobile tower. Under (unrealistically) idealized conditions, a speed around 300Mbps might be possible.

The bad news is that low band 5G may, depending on where you live, come nowhere close to those numbers. I was never able to get a 5G download speed higher than 34Mbps during tests of T-Mobile’s network in Orange County, California, where I live, and that’s slower than I’ve commonly seen on 4G elsewhere. However, my 5G phone’s Speedtest numbers were typically — not always — between 20% and 100% higher than results at the same times and places on a 4G iPhone 11 Pro.

In other words, your worst case scenario for low band 5G is “a little better than 4G,” with a guarantee of widespread coverage — and the 600MHz signal’s ability to pierce windows and walls. That’s not a bad starting point for 5G, and it gets much better from there.

Mid band 5G is depicted by the yellow central layer of the cake, and like 4G today, it’s likely to become available in all the major “metro” areas of the United States across every major carrier in 2020. This flavor of 5G may constitute the minimum 5G performance tier in some countries; some carriers will skip low-band 5G altogether.

In the U.S., one carrier (Sprint) is already offering mid band 5G using 2.5GHz frequencies, while in foreign countries, mid band 5G generally uses similar 3.5-3.7GHz frequencies. Mid band 5G is also called “sub-6GHz” (aka “less than 6 Gigahertz) because it includes radio frequencies ranging from 2-6GHz, all of which have similar speed and distance characteristics, but may or may not be available for cellular use in certain countries. Regardless, towers built with mid band radios can offer service within several mile radiuses — shorter than low band, but further than high band. 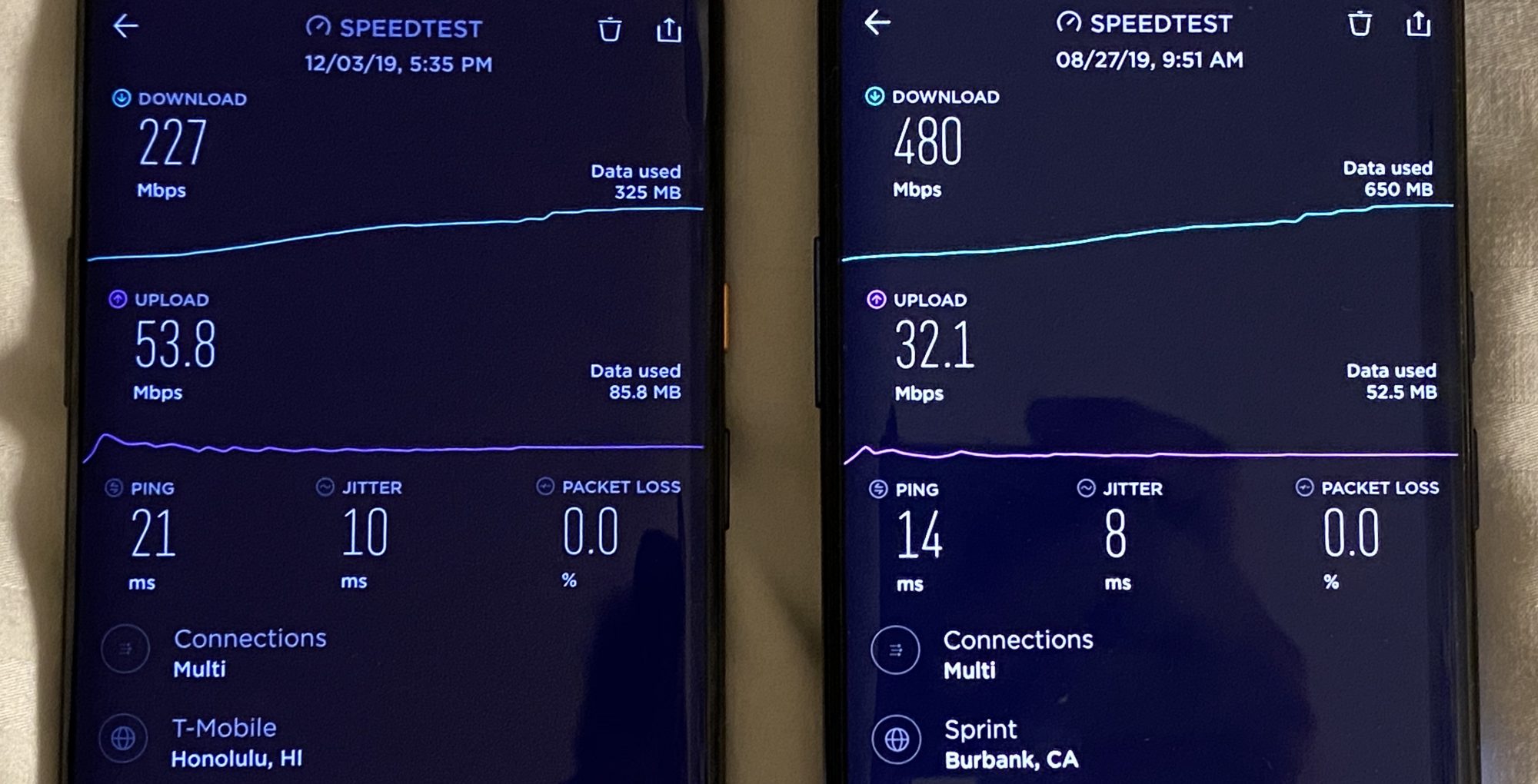 In part because carriers are able to allocate larger chunks of transmitting spectrum to mid band 5G than low band 5G, data speeds are markedly higher. My personal tests of the first Sprint mid band 5G phone peaked at 480Mbps, but more commonly fell in the 125-200Mbps range — an average around as fast as low band 5G at its best, with the prospect of reaching 600-700Mbps peaks in some markets. That said, in the four months that passed since I first began Sprint testing, I still can’t get a 5G signal where I live, and need to drive up to Los Angeles to reliably connect to Sprint 5G towers.

Outside of the U.S., including China and South Korea, carriers and phone makers are currently promising peak mid band 5G speeds in the 2 Gigabyte per second (Gbps) range, but more commonly delivering 600-900Mbps peaks. Chipmakers expect to deliver roughly 5Gbps speeds over mid band in upcoming chipsets, and Huawei says it achieved a 3.67Gbps peak using mid band in Switzerland. Within the cellular industry, it’s clear to everyone at this point that mid band 5G will soon be the sweet spot for 5G distance and performance, assuming you live within a couple of miles of a tower.

The small red tier at the very top of the cake represents high band millimeter wave (mmWave) 5G, super fast but very short-distance towers that will be deployed in “dense urban” environments and public gathering places that frequently serve huge numbers of people — sporting and concert stadiums, convention centers, and the like. At one point, some carriers suggested that mmWave 5G would be the only “true 5G” solution, but the last year has conclusively demonstrated that mmWave “small cells” are not going to be deployed as widely as was originally hoped. 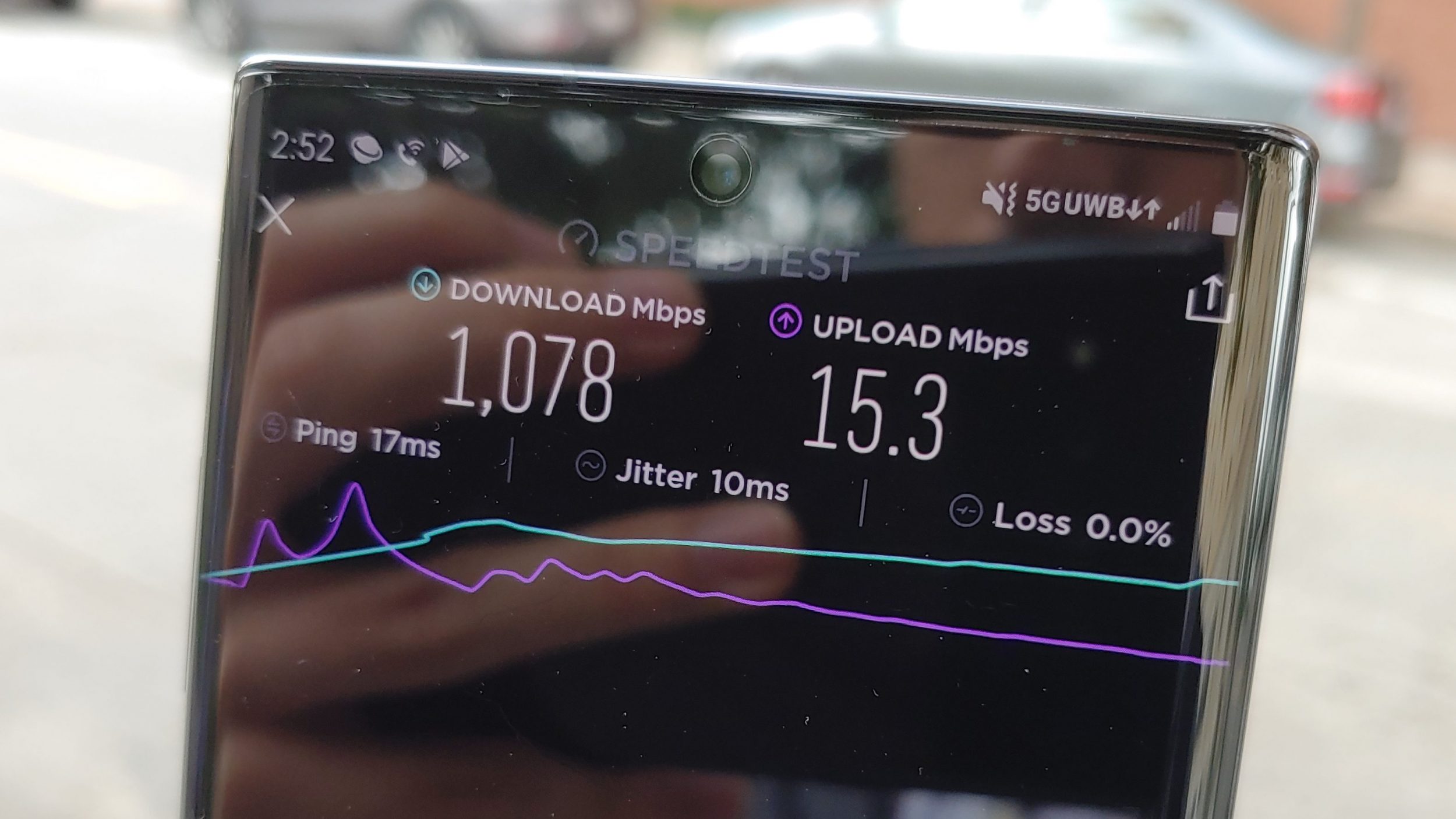 The maximum range of high band 5G antennas recently improved to just over one mile, though mmWave signals are far more susceptible to physical encumbrance than low and mid band ones — buildings in urban environments knock that distance down to roughly 0.7 miles, and certain types of glass and walls can snuff out mmWave signals altogether.

If you’re near one of those towers, however, you’ll see peak cellular speeds beyond your wildest dreams: real world numbers between 1-3Gbps, which is to say in the neighborhood of 30-80 times faster than today’s typical U.S. 4G connection, matching or exceeding current top performing home broadband packages. Qualcomm and Samsung are raising the bar even higher, saying that their latest 5G modems can peak at over 7Gbps over mmWave.

Having your cake and eating it, too

Though there’s been a lot of chipmaker and carrier fuzziness over what 5G performance would actually be like in the real world, the numbers above are based on actual testing, so they’re a fair base line for what 5G will be like near you next year. If you live, work, or attend events near high band “small cells” or mid band towers, you can expect to see wickedly fast data speeds in the near future, and may want to jump on the 5G phone bandwagon early next year. Conversely, if you’re in an area that only has low band 5G service, you’ll likely see at least a small bump in phone speeds the next time you upgrade, and might not need to rush out to do it.

Expect change to be a constant with 5G, though, including steps forward and back. Announcements of new 5G cities and additional 5G towers should be fairly frequent for the foreseeable future. But when a high-speed 5G tower goes up and gets saturated with users, carriers will need to add 5G capacity — possibly sharing or switching over less-used 4G radio towers — to keep data speeds up. This process will likely go on for years, though it won’t always be obvious to users.

Over the next year, carriers and consumers will both need to focus on whether their phones (and other cellular devices) are capable of tuning in low, mid, and high band 5G. Extending the analogy above, users may be unpleasantly surprised to discover that their pocket TVs aren’t capable of receiving the 5G signals they need for 3D videos, or can’t acquire 5G signals in their homes. Some carriers will make this easier to figure out than others, and if not properly addressed, it may prove to be one of the biggest sources of 5G consumer complaints in 2020.

I’ll have much more to say on the latest 5G developments in the very near future. Watch this space for all the details.