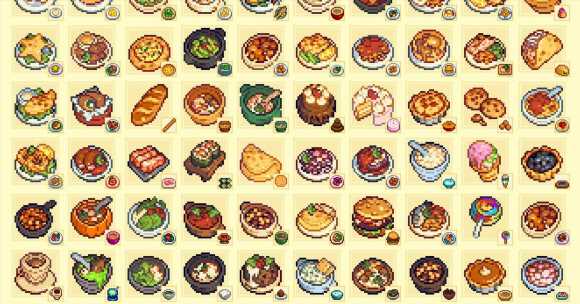 Food has always been cute in Stardew Valley, the popular farming sim developed by Eric Barone. A new food mod adds more realistic, charming details to Stardew Valley’s meal sprites, and puts them in an isometric perspective. The mod designer, who goes by Lux on Twitter, has redesigned 80 of Stardew Valley’s cooked meal items. And while the classic sprites have always looked cheery, this is the first time I’ve seen a mod that makes me literally want to eat these meals — especially given the, erm, interesting way you acquire some of them.

Cooking is a core part of Stardew Valley. Though players don’t have a cooking skill to max out, making meals is a strategic part of the game. Consuming food restores some amount of player stamina, and many meals impart bonuses like +3 fishing or foraging. Eventually you learn to strategize, stuffing Lucky Lunches (+3 luck) into your inventory before mining in the Skull Caverns. Cooking is also just a fun way to pass the time, and Stardew Valley is no stranger to food mods, with the popular mod The Love of Cooking at more than 29,000 downloads on Nexus Mods.

Lux started developing these new food sprites in 2018 as a fun personal challenge, rather than as a mod specifically, making around 15 during that time period. In April 2021, she picked the project back up after seeing her pixel art being shared on Pinterest. This time, when Lux shared the project on social media, the response “far exceeded my expectations, and many people asked if I was making a mod or if I would consider making one,” she told Polygon over Twitter DM.

Initially, Lux wasn’t sure how to develop her artwork into a mod that would work for Stardew Valley — her sprites use a native resolution of 24×24, hence the added detail, rather than Stardew Valley’s 16×16. Luckily, a “generous stranger” who goes by Ceedtroid on Twitter helped her determine that such a mod would be possible. Since then, Lux has been working on the mod in her spare time. It’s currently available in early access to her Patreon subscribers, but Lux plans to make the mod free to download on Nov. 1.

“As an artist and game developer I understand the rarity of having something you create resonate deeply with so many,” Lux said. “I decided to move forward with the project in my spare time with the intention of releasing them as a mod and allowing others to enjoy my work.”

Each sprite takes about an hour to design from “research to completion,” with a bit of wiggle room for more complex ones, Lux said. Lux uses food photography as a reference to capture texture and detail, and as a way of getting “presentation and plating” right, while making sure to stay true to the heart of the original design. The increased resolution of her work means capturing a heightened degree of realism, though she “often [has] to get creative with the ‘pose’ of the object to make the best use of the square space.”

Lux also found inspiration in classic Neopets item icons. “Although they’re not pixel art, there’s a lot to learn there about using space effectively and stylizing detail in a way that is really charming,” she said.

So far, the hardest ones to get right have also been Lux’s favorites to design — especially breaded items like crab cakes and fried eel. Pepper poppers were also a challenge, but Lux’s taste aligns with that of Stardew Valley character Shane on this one: “I think that’s one of the dishes I’d most like to eat!”