While mobile industry group GSMA canceled this year’s MWC Barcelona trade show due to coronavirus concerns, that hasn’t stopped the publication of its annual report on the global mobile economy, which arrived today in typically comprehensive form. Among the key takeaways: China has an early lead in 5G and smart device interest, though the United States is expected to equal or surpass it over the next five years, with European and other countries trailing behind them.

China’s strength is evident in multiple GSMA findings. On the enterprise side, GSMA says that China is “racing ahead” in organizational 5G interest thanks to early partnerships and local operator trials, showing widespread intent to use 5G in industrial settings. By the end of 2018, Chinese businesses already had higher rates of interest in 5G network slicing, edge computing, and low latency services than the rest of the world, as well as the same high (74%) rate of interest in higher data speeds. GSMA says that Chinese industry is a “clear exception” to the belief elsewhere that 4G is “good enough,” and will help quadruple the number of smart manufacturing IoT connections over the next five years.

Consumer interest in 5G is similarly advanced. Following its accelerated 5G launches in 2019, China now has the world’s highest rate of intention to upgrade to 5G (70%), the second highest percentage of adult awareness of 5G (over 85%, behind only South Korea), and the highest willingness to pay more for 5G service. A total of 78% of Chinese users are willing to pay some premium, versus 60% in the United States, and fewer in most other parts of the world — figures that help carriers determine whether they’ll be able to recoup their typically massive investments in 5G infrastructure.

While the GSMA says that consumer interest in 5G is more tempered in Europe and Japan, it expects 5G marketing ahead of the 2020 Summer Olympics to improve users’ upgrade intentions — though its projections don’t appear to have taken the COVID-19 coronavirus into account. In addition to canceling MWC, which was expected to be 5G’s major coming-out party in Europe, the Olympics have been threatened with cancellation, as major trade and corporate gatherings across the world have been shut down or postponed out of “an abundance of caution.” 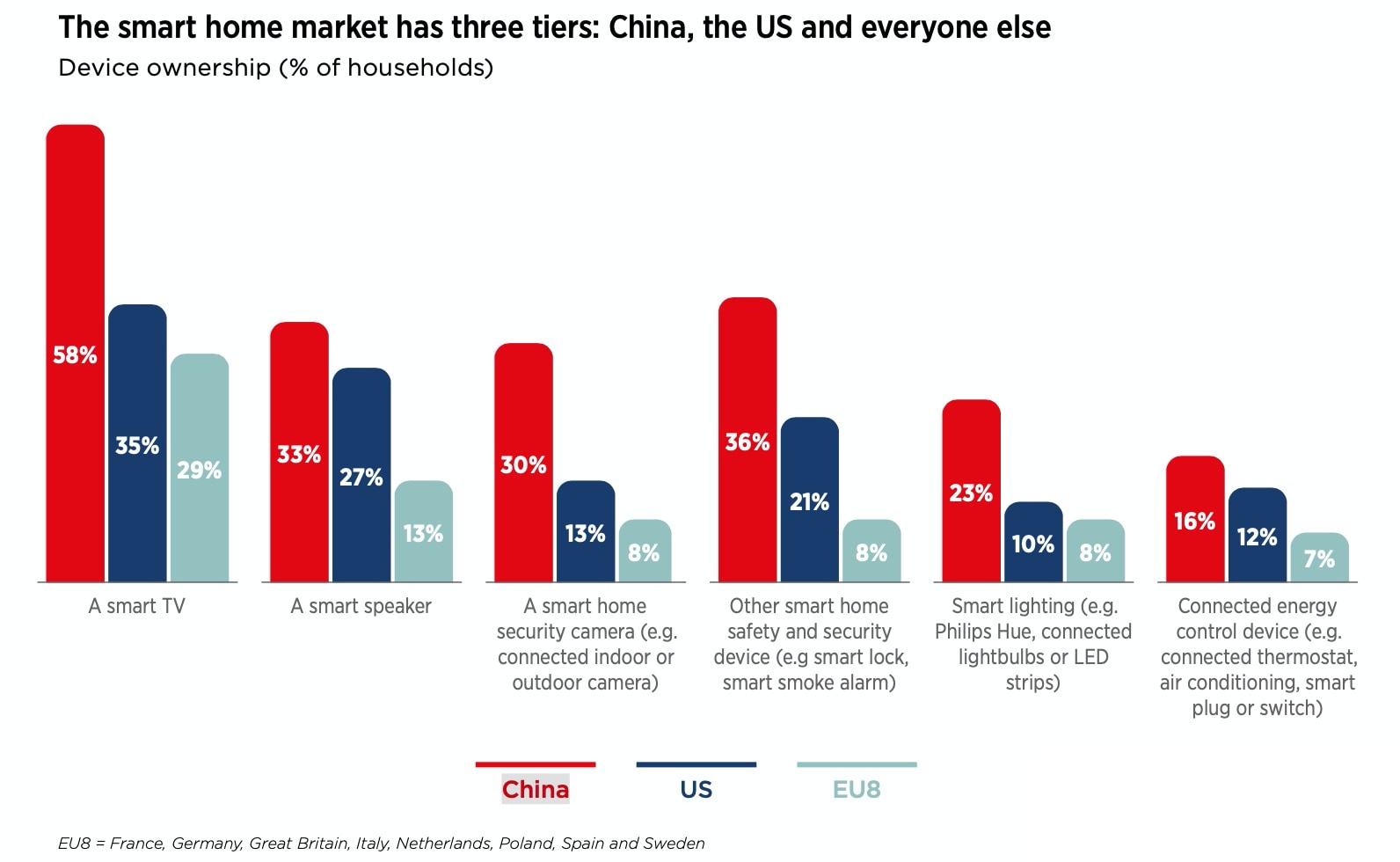 Another strength for China is in the smart home market, which GSMA describes as having three tiers: China, the U.S., and everyone else. As of now, China has the highest rates of ownership for smart TVs, smart speakers, smart home security cameras, and other types of smart devices ranging from security to lighting and energy controllers. The U.S. trails China in every category, sometimes by a factor of 2:1, while adoption in key European countries is even lower.

While TVs currently lead all other “smart” categories in consumer adoption, GSMA expects that smart speakers could go mainstream in 2020, and “be at the center of a smart home revolution,” thanks in part to a global doubling of ownership in 2019 led by Amazon and Google products. That said, actual uses of the speakers “remain rudimentary,” GSMA notes, with most users merely playing music or requesting information, rather than controlling other devices or making purchases. Research suggests that the speakers’ lack of sophisticated problem-solving AI and still-uncertain utility are believed to be their biggest obstacles to further adoption.