Listening to music has long been a staple of Twitch streamers as a way to fill time or to just chat with viewers. Thanks to more aggressive enforcement of Twitch’s Terms of Service, listening to music on the platform might be a thing of the past. Over the past several days multiple streamers have reported receiving Digital Millennium Copyright Act (DMCA) notices for past content. Some streamers have been threatened with being banned from Twitch if they do not comply with the takedown requests.

I’ve been issued 2 copyright strikes on my channel (both from clips over a year old) in the past week and told that if they find one more violation in my clips, my twitch account will be permabanned. (1/4) 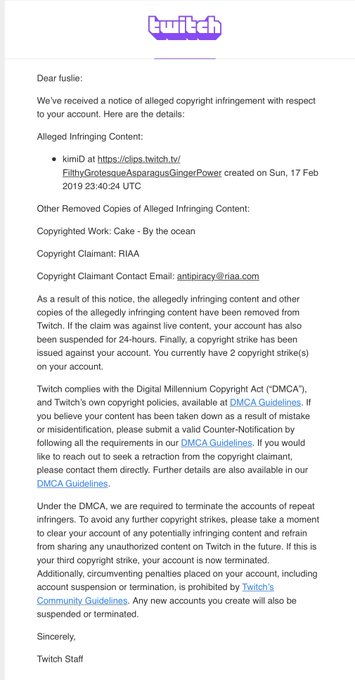 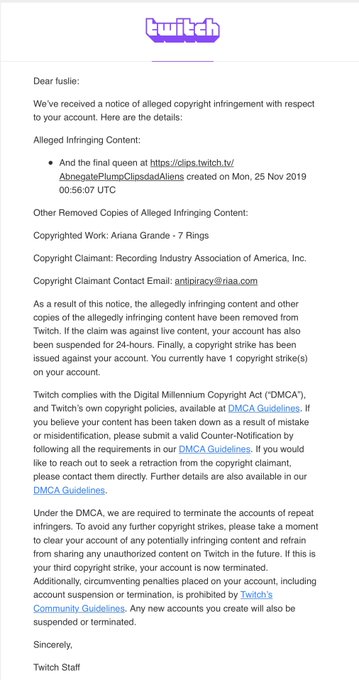 Streamers Leslie “Fuslie” Fu and Jake “JakeNBake” Abramson are among those who have been issued DMCA notices for past videos. Fu’s DMCA claims are from the Recording Industry Association America (RIAA) and are for several videos from 2019. Twitch’s Music Guidelines have not been changed or updated recently; they are merely being enforced more heavily.

Twitch’s policy asks that streamers only play music for which they have the required rights. According to the Music Guidelines, “It is a violation of our policies to stream or upload content containing copyrighted music unless you have the appropriate rights or authority to share such music on Twitch.” The guidelines also reiterate that copyrighted music should not appear in past broadcasts and premieres, highlights, clips, and uploads.

Twitch is aware of this increase of DMCA claims against old content, but there doesn’t appear to be much that the streaming platform intends to do. Currently, Twitch advises streamers to take down past streams if they are unsure if they might be subject to a copyright claim. In a statement on Twitter, Twitch clarified what their legal responsibility is: “We adhere to the DMCA, which requires that we take action on content and streamer accounts upon notice from rights holders, as happened this week.”

This week, we’ve had a sudden influx of DMCA takedown requests for clips with background music from 2017-19. If you’re unsure about rights to audio in past streams, we advise removing those clips. We know many of you have large archives, and we’re working to make this easier.

This is the first time we have received mass DMCA claims against clips. We understand this has been stressful for affected creators and are working on solutions, including examining how we can give you more control over your clips.

It seems that the future of streaming music on Twitch is going to be very different moving forward. While content creators are still welcome to make and share their own music, radio streams, karaoke, and cover songs, they are likely to have a bigger target on them than before. For more on the status of Twitch and how the platform is evolving, make sure to follow Daily Esports.