Gideon lives on in Magic: The Gathering, watching over all and powering up White in Theros: Beyond Death with Taranika, Akroan Veteran.

Gideon Jura, also known as Kytheon Iora, is raised as a statue on the plane of Theros, seen behind Taranika, Akroan Veteran. The Theros: Beyond Death (THB) spoiler of Taranika lends Gideon’s power to another creature until the end of a turn while also untapping it. 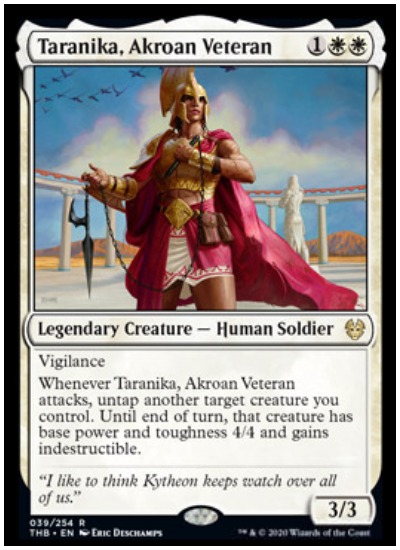 Taranika, Akroan Veteran has Vigilance and a CMC of three, two White. Whenever she attacks, Taranika untaps a target creature and turns it into a 4/4 with indestructible until the end of turn. On a basic level, Taranika has the potential to untap an attacking 1/1 token and turn it into a 4/4 with indestructible. And when her attacking trigger is placed on a creature like Swiftblade Vindicator, the damage can skyrocket quickly.

But Taranika only has a defense of three, leaving her susceptible to board wipes like Deafening Clarion or getting blocked by a larger creature like Lovestruck Beast. In a THB lifegain deck, Heliod, Sun-Crowned can beef up Taranika with a +1/+1 counter. The same is true for an enchantment based deck with Pious Wayfarer.