Welcome back to part four of our coverage of Street Fighter League, with Week 5 of Season 3. This week’s event featured some incredible matches, as well as its fair share of upsets. The first team match this week featured team All-In, consisting of iDom, SKZ, and 801 Strider. They faced team Dynamite and Smug, MenaRD, and Gamerbee. The back half of the night was team UYU’s Oil King, JB, and Kami versus Alpha 3’s Punk, CJ Truth, and Nephew. We will begin with the first half of the night with one of the most anticipated team matches of the season: All-In versus Dynamite.

All-In’s ban this week was Balrog targeting Smug, and Dynamite once again went with a Poison ban that targeted iDom. The Poison ban remains about as effective as it has been since the season’s start. Meaning, not much at all. The first match was SKZ versus Gamerbee in yet another Seth mirror. Gamerbee quickly ended the first match of the night, going 2-1 in games one and two and having a particularly clutch finish in round two of game two. All-In started the night off 1-0.

The event continued forward with the second match of the night featuring 801 Strider, who was finally free to unleash his G against MenaRD’s Seth. Mena continues to surprise with his grab bag of character choices, seeing success with every character he picks. Mena began the match by going 2-0 in game one, but 801 Strider pushed back in game two, making it 2-1. Sadly for Strider though, Mena did what Mena does and took the third game with a decisive 2-0 victory. Mena was even able to get a perfect KO in round one of game three, ending the round with G’s stolen move, no less. He then followed that up with a clutch confirm into super to take the match. Both teams were now tied up 1-1. 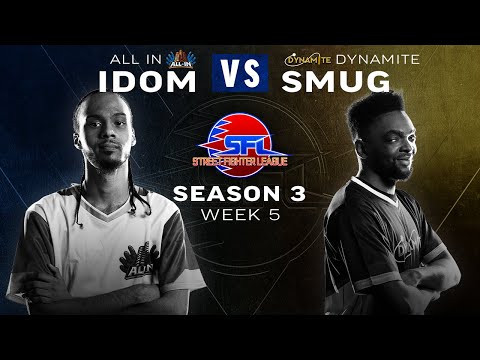 The third match was iDom’s Laura versus Smug’s G. For those who watch the weekly NLBC tournaments, this was a classic matchup. Unfortunately for Smug, it ended the same way those NLBC matches usually do. Idom took game one 2-1 with an almost perfect first round. Smug pushed back though with some more of the galaxy brain command grabs he is known for in round two. He took that second round after turning it around with a wakeup critical art. Despite his best efforts though, iDom took game two 2-0 in an incredibly dominating fashion. All-In was now on tournament point 2-1.

Once again, the fate of Team Dynamite was left up to MenaRD in the fourth match against SKZ’s Seth. Surprisingly, Mena decided to go with the Seth mirror, a decision that may have ended up costing team Dynamite the night. SKZ took game one 2-0 and game two 2-1, getting a perfect KO in round three of game two. SKZ showed again why he is the young phenom to keep an eye on. Even though Mena may not have performed that well in the mirror, doing that well against a Capcom Cup champion, regardless of the matchup, is incredibly impressive, and SKZ should be proud. Team All-In took the night 3-1 and continued their winning streak with an untouched 4-0 record.

The second half of the night was UYU versus Alpha 3. Going into week five with an 0-2 record team, UYU had a lot to prove against Alpha 3, who, despite a rough start, has been climbing the rankings ever since. UYU decided to ban Kolin for Nephew, and Alpha 3 selected Rashid for JB. JB at this point was unable to unleash his Rashid and it definitely affected the team’s performance. The first match of the night was Kami’s Seth versus Nephew’s G. Nephew took game one 2-1 despite Kami getting a perfect KO in round 2. Kami pushed back taking game two 2-1 with clutch comebacks in both rounds two and three. 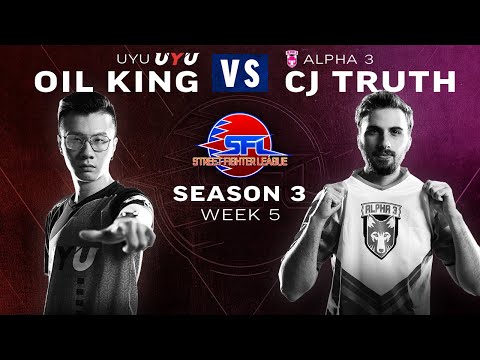 CJ took game one 2-1 with an amazing chip kill in round one. He also pulled off an amazing whiff punish in round three. He then proceeded to combo into critical art for the kill. CJ effectively used his meter so well that he had access to critical art more often than most characters, and it really showed here. He then took game two 2-0 after Oil King was unable to punish a whiffed critical art. CJ’s amazing patience and awareness were on full display in this match. Alpha 3 was now up 2-0 on tournament point.

The third match of the night was JB’s Poison against Punk’s Cammy. To viewers, it was just disheartening to see it go down as it did. All by himself with no Rashid against Punk of all people was an incredibly difficult uphill battle. Punk was able to take games one and two 2-0 ending the night for UYU with a 3-0 victory for Alpha 3. After Dynamite’s loss, Alpha 3 reached second place with a 2-1 record as Dynamite’s record dropped to 2-2. UYU struggled at 0-3 and it felt like once the second half of this season of Street Fighter League began and JB could finally bring out his Rashid, they would finally shine. 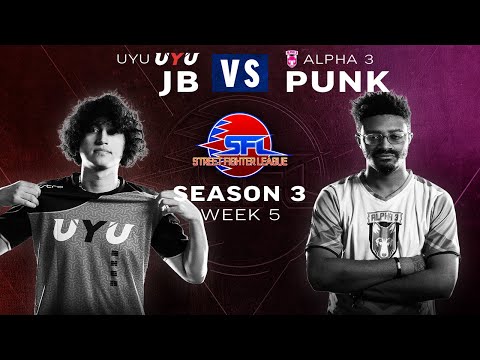 Alpha 3 continues to climb the rankings

Street Fighter League will continue next week on November 12. UYU will take on Psycho Shinobi and Alpha 3 will face off against NASR. The stream will begin at 7 PM ET, and you can catch it on the Capcom Fighters YouTube and Twitch channels.