The latest Mobile Legends: Bang Bang patch, 1.4.94, has hit the live servers and it’s a big one. The update makes changes to a ton of heroes along with battlefield, creep, and equipment changes.

It also reveals new events and features including the return of the KOF skins (30 days only), the Summer Carnival skin gifting event, and the network boost function.

Another big thing worth noting is an adjustment to the AFK punishment rules. From now on, “performing short-period AFK multiple times is regarded as AFK and the player will be punished.” In addition, if the time a player is AFK throughout a match crosses a certain point, the player will not earn a star even if their team wins the match. Going AFK multiple times in games will result in the player being banned from Ranked for a “long period of time.”

A total of 17 heroes saw buffs, nerfs, fixes, and adjustments in this patch. You can find the full patch notes list below:

Hero Feature: A swift and dauntless fighter who battles with the help of the Desert Power.

Skill 1: [Desert Tornado] Khaleed shoots sand knives, dealing damage to nearby enemies. Upon hitting the enemy, he leaps one time in the movement direction and casts this skill again for a maximum of 3 times.

Skill 2: [Quicksand Guard] Khaleed protects himself with the power of quicksand, restoring HP and Desert Power and reducing damage taken. Meanwhile, quicksand appears under his feet, slowing nearby enemies.

Ultimate: [Raging Sandstorm] Khaleed summons a sandstorm and rushes toward a designated place, gaining Control Immunity, dealing damage to enemies on the path and constantly pushing them. Upon arriving at the destination, Khaleed shakes the ground, dealing great damage to enemies within the range and stunning them.

Passive: [Sand Walk] Khaleed accumulates Desert Power while moving. After Desert Power is fully charged, Khaleed will slide on sand, increasing Movement Speed and enhancing his next Basic Attack. With the enhanced Basic Attack, Khaleed dashes to the target and raises a wave of surging sand, dealing damage to the target and enemies behind and leaving a pool of sand. Khaleed gains Movement Speed on the sand pool while his enemies are slowed on it. 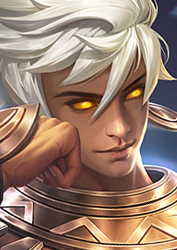