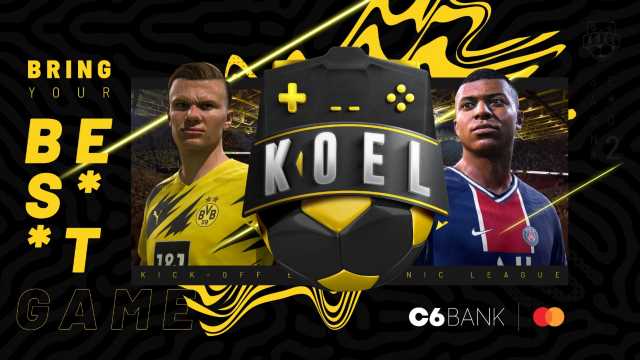 The Kick-Off Electronic League (KOEL), an independent EA Sports FIFA 21 league set in Brazil managed by the gaming and esports promotion company 7WPlay, is now being sponsored by Mastercard and the Brazilian digital bank C6. Both brands will be featured as main sponsors for the KOEL season that starts on March 22, and ends on July 31.

The CEO of 7WPlay Felipe Carvalho tells The Esports Observer about the deal: “For us, it is a turning point to have Mastercard, which is also a sponsor of the main esports project in Brazil, the CBLOL [the Brazilian League of Legends Championship by Riot Games], inserted into our project together with the C6 Bank, which is an extremely digital bank and carries in its DNA to develop and build an innovative territory. For the soccer esports, it is a landmark to have such brands involved with our product.”

Both Mastercard and C6 Bank brands will be displayed during KOEL’s matches, post-game programs, and other special content. Also, the sponsors will appear on a reality show to be featured on Amazon Prime Video, presenting the backstage stories of the league.

KOEL is one of the main initiatives in esports regarding FIFA 21 competitions, featuring traditional organizations from the Brazilian esports scene such as Black Dragons and INTZ, known local clubs including Athlético PR and Santos, and even international clubs like Internazionale Milano, Sporting de Portugal, and Wolverhampton.

The league will be broadcast on its own channels on Twitch and Twitter, on pay-TV through BandSports, and on sports streaming service DAZN. The KOEL season finals are planned to be held on an in-person event on Jul. 31 respecting sanitary protocols due to the COVID-19 pandemic. The prize pool adds to $75K BRL (roughly $13.4K USD).