Riot Games keep revealing day by day all the new cards, champions, keywords, and spells that will come with Legends of Runeterra’s Call of the Mountain expansion next August 26th.

After the last announcements, that brought a new keyword, Nightfall, together with five new collectible cards that will work around the Nightfall mechanics, it was just a matter of time before Riot Games revealed the cards of the Champion coming from the Shadow Isle region: Nocturne.

The last nightmare you’ll ever have. pic.twitter.com/SBiqfGaRFr

Nocturne will bring the nightmares to our decks in a four-mana-cost Champion card with 5/3 in the stats and the Fearsome keyword. It will follow the Nightfall ability both granting an enemy Vulnerable and giving all the enemies -1|-0 for one round.

It will reach his leveled form when we have attacked with more than five Nightfall allies.

Nocturne’s leveled form is a champion unit with 6/4 in stats and the Fearsome keyword that grants the ally units Fearsome. This card unit will also reduce the power of all enemies -1|-0 for one round whenever we play any of our units.

If you want to know what cards does Nocturne require to work with the Nightfall ability (and what does this keyword do), take a look at the last announcements made by Riot Games.

As we can see in the presentation Tweet above, Nocturne will bring a new Burst spell called Shroud of Darkness. This Burst spell is a one-mana-cost spell that grants an ally +1|+0 and SpellShield for one round the next time we summon it. 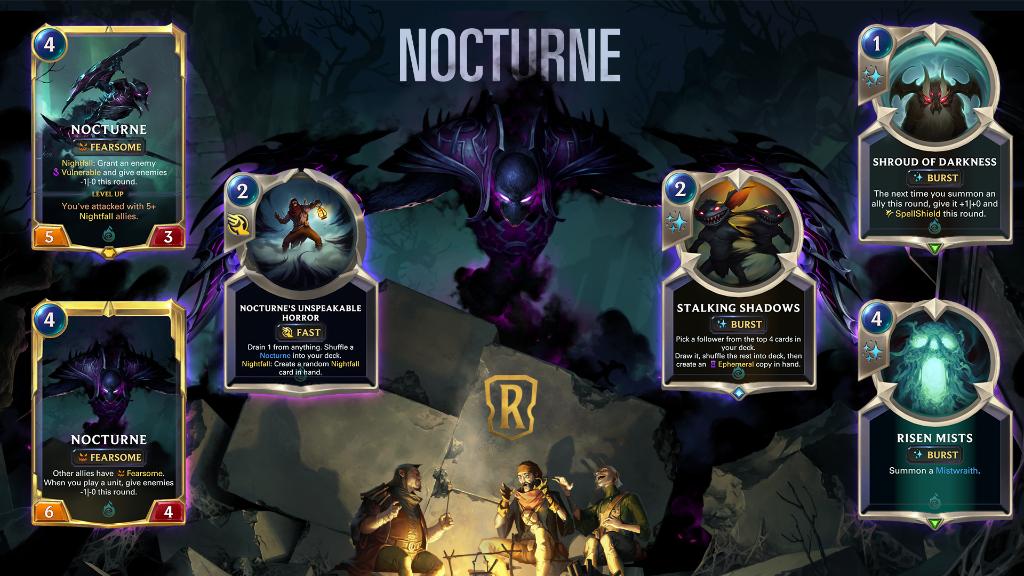 Right after Nocturne was unveiled, we had new spoilers for the Call of the Mountain expansion regarding the Nocturne package that will complete the Nocturne champion unit cards and the Burst spell we have talked about before: Nocturne’s Unspeakable Horror, Stalking Shadows, and Risen Mists.

After all these “dark” announcements, Riot Games brought some light to the Legends of Runeterra expansion by unveiling a new keyword and four new followers coming from the Targon region.

The Solari devote themselves to the sun—and are blessed by its light. New Keyword—Daybreak: Bonus if this is the first card you play in a round. pic.twitter.com/LyrZhRcr0x

The Solari will break into our decks with a new mechanic that will grant us bonuses if some of them are the first card that we play within a turn. That is how Daybreak will work, just the opposite of how Nightfall does.