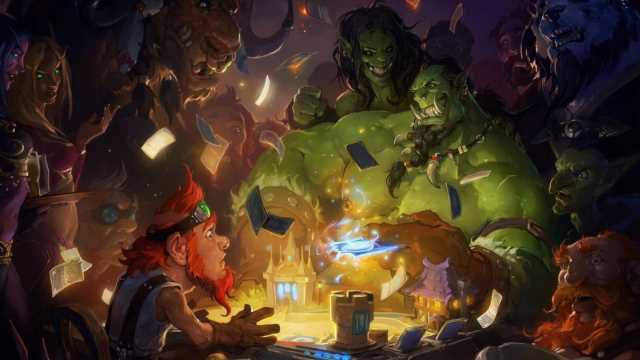 The top eight players of each region duked it out against each other in 2021 Hearthstone Grandmasters Season 1 matches throughout April 10. These games followed the ones that occurred on April 9. A spot in the semifinals and the lion’s share of the weekly prize pool were at stake.

During the live broadcasts on YouTube, the Hearthstone community had the chance to earn Hearthstone card packs as well.

The Asia-Pacific region started the day off strong with several games between Yashina “Alutemu” Nozomi and Wesley “lambyseries” Seek. Alutemu earned his spot in the semifinals with a score of 3-2 using his Control Priest deck against his opponent’s Token Druid.

Up next were three games between Jung-soo “Surrender” Kim and Yu Hsin “GivePLZ” Pa. The latter Hearthstone player achieved victory with a score of 3-0. The winning decks consisted of Tempo Rogue, Spell Mage and Token Druid.

The games between Kenta “glory” Sato and Wei-Chieh “Shaxy” Liu resulted in the same 3-0 score. This meant glory went onto compete in the Asia-Pacific Hearthstone Grandmasters semifinals.

Ching-Li “TIZS” Li clashed against Wei Lin “tom60229” Chen in the final set of Hearthstone Grandmasters matches for the Asia-Pacific region. During the fifth game between them, TIZS put pressure on his opponent’s Token Druid by consistently clearing the board. TIZS then closed out the Asia-Pacific region quarterfinals with a score of 3-2.

The first match of the second day for Europe consisted of Leta’s Post Rogue deck versus Linh “Seiko” Nguyen’s Control Priest. Seiko cleared Leta’s board and gained value via the priest Hero Power.

Meanwhile, Leta had to control the board using Devolving Missiles. Although Leta controlled the board and built one of his own later in the game, it was not enough when Seiko played Yogg-Saron, Master of Fate, which resulted in a board clear with Devouring Hunter.

However, Leta was able to bring it back around in the next three games, which brought him into the semifinals.

In the games between Thijs and Jaromír “Jarla” Vyskočil, Thijs earned a score of 3-2. Thijs won the decider match using his Rogue deck against his opponent’s Mage. Meanwhile, Raphael “Bunnyhoppor” Peltzer and Warma duked it out in four games. The last game was a Priest mirror match and Warma came out on top with a score of 3-1.

Torben “Viper” Wahl then dueled against Kevin “Casie” Eberlein. After five hard-fought games, Viper obtained a score of 3-2 with his Rogue versus his opponment’s Mage deck.

The final region that played in the Saturday quarterfinals was the Americas. Luna “lunaloveee” Eason and Shuntian “DreadEye” Luo won against their opponents Eddie “Eddie” Lui and Mihai “lnguagehackr” Dragalin respectively. While lunaloveee earned a score of 3-2, DreadEye secured a 3-1.

The fifth game between lunaloveee and Eddie consisted of a Token Druid mirror match. While Eddie had control of the board during the early turns, lunaloveee persisted and played Glowfly Swarm to summon minions on her side of the board. These minions were later buffed and lunaloveee turned the game around.

In the next set of Hearthstone games, Luke “NoHandsGamer” claimed victory against Muzahidul “muzzy” Islam with a score of 3-2. NoHandsGamer won the decider match after choosing his Post Rogue deck to clash against his opponent’s OTK Demon Hunter.

Jerome “Monsanto” Faucher then closed out the Hearthstone Grandmasters Americas games by obtaining the same score against Davi “Fled” Garcia. The victor used his Spell Mage deck for a 3-2 win over Soul Demon Hunter.