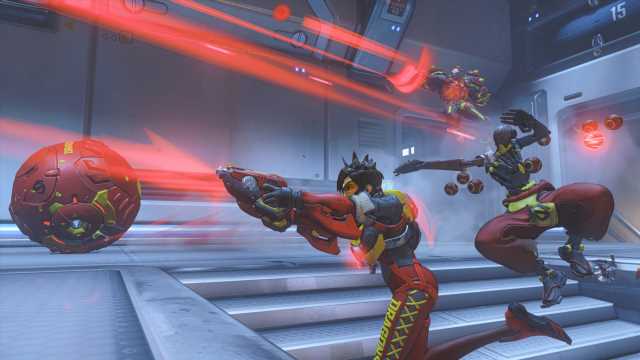 On Sunday, May 2nd, after the first batch of regular season matches concludes, two teams in the West Region will qualify for the first international tournament in the Overwatch League’s 2021 season. Whether it be the San Francisco Shock or the London Spitfire, two teams will need to prepare for a long flight to Hawaii.

“We’ll only be working with a couple of finalists,” said Overwatch League commissioner Jon Spector on how only four teams will compete in each of the season’s four tournaments. “Once they qualify on Sunday we’ll move quickly, we’ll have info on the flights we can book and hotels they can stay in ready.”

Western teams will need to receive a negative COVID-19 test to prove they don’t have the virus before entering Hawaii. Once there, they won’t have to compete until Thursday, May 6. Spector has spoken with the general managers for every team to confirm that that was enough time to deal with jet lag and prepare to play.

The two squads that qualify will be flying to Hawaii to play out of a facility at the University of Hawaii where Overwatch League officials have been able to directly route the ISPs of computers at the school to a server in Tokyo. Teams in both South Korea and China can connect to the same ping levels that are less than 90 ms. The connection helps teams compete from across the Pacific with little impact from lag.

A partnership with the University of Hawaii

“The single way to improve the structure we used in 2020 was to add that global competition,” Spector said. “In the May Melee tournament the Shanghai Dragons won in Asia, the SF Shock won in North America. The question was who was better between the two. We couldn’t answer that question last year.”

The Countdown Cup, Summer Showdown, and May Melee tournaments were held separately in Asia and North America last year, meaning that teams rarely played against internationally-based opponents. That changes with all five of 2021’s tournaments, the playoffs and grand finals included .

Spector doesn’t know if something will change before this May tournament, despite the league kicking off on April 16.

“One of the biggest lessons we learned from 2020, in the middle of a pandemic, was that setting any plans in stone is not the wisest course of action,” Spector said. “We’re trying to preserve our ability to be able to change during a pandemic.”

The Revention Music Center  held the a 2020 OWL event in Houston before the pandemic forced organizers to shift to online play. Credit: Ben Pursell for Blizzard Entertainment

“Project Aloha is plan A,” he added, referencing the league’s name for their Hawaii-based tournaments. While Spector didn’t get into specifics, he said that the league has several backup plans in case Hawaii experiences another COVID-19 outbreak or travel restrictions to the state change.

“If necessary, maybe this happens for one of the tournaments, the default fallback is regional tournaments,” he said. “But before that, maybe there are scheduling solves, maybe there is a travel somewhere else solution.”

Discussions about how to make the Overwatch League’s shift to online play more digestible for both players and fans began last March when the pandemic first hit. Spector put the idea of a minimum latency feature, which sets a target latency between two teams that levels the playing field, on the radar of the development team. Then Activision-Blizzard’s legal team started surveying a number of islands across the Pacific to find a location that would serve as a bridge between North America and Asia.

“We knew Hawaii was the best option once we completed the server tests,” he said.

Spector and his team explored a number of possibilities, including a return to in-person play in South Korea. Last season both the Philadelphia Fusion and San Francisco Shock flew to Seoul, quarantined for two weeks in government housing and then practiced on laptops before the grand finals.

“We found that sending teams from North America to South Korea works,” Spector said. “But it also adds three weeks of downtime to the season because of the quarantine requirements.”

Plans for the 2021 grand finals are the “least set in stone” of all the tournaments this season, according to Spector. While he hopes that the league can host some live events at some point in 2021, he notes that they don’t have to in order to be successful.

“The fact that we don’t have to compete in person is unique to esports,” he said. “The NFL and MLB can’t do that. We don’t need to take unnecessary risks the same way March Madness finals don’t exist unless you can get both teams to the same gym.”