DreamHack just completed its inaugural Fortnite duos competition after focusing on solos for the last few months. This competition, dubbed DreamHack Online Open, gives players across the world a chance to win substantial amounts of money in an open Fortnite tournament environment. DreamHack recently switched from solos to duos after receiving a lot of player and fan feedback. The competitive Fortnite fanbase erupted with joy as countless players in the NA East, NA West and European regions settled on their partner. The European region kicked off November’s inaugural DreamHack Duos event with $250K USD on the line.

Although the competition featured EU players predominantly, some NA East and NA West titans also attempted to reach the Grand Finals to no avail. Some top teams, including NRG benyfishy & 100T MrSavage, XL Wolfiez & FNATIC crr, Wave JannisZ & Rezon and several others, reached the Grand Finals with hopes of padding their career earnings and claiming a DreamHack title.

OVA Noahreyli and Wave Vadeal Hang on to First Place

The European region brought the intensity as they usually do in the first of three regional duo tournaments hosted by DreamHack. As the final match came to its conclusion, Noahreyli and Vadeal stood as victors above all other teams. These two players delivered 352 points with 34 eliminations and no Victory Royales. Four top-10 finishes and consistent elimination points proved a recipe for success for these two young European phenoms. Despite Noahreyli’s original duo partner – COOLER aqua – not being able to play, it made no difference.

Noahreyli and Vadeal collected an impressive $24K USD to split. Some other top names crowded the leaderboard, including NRG Benjyfishy and 100T MrSavage, who made the competition enjoyable late in the going. However, Noahreyli and Vadeal’s surgical performance was too much for the other Grand Finalists to overcome. 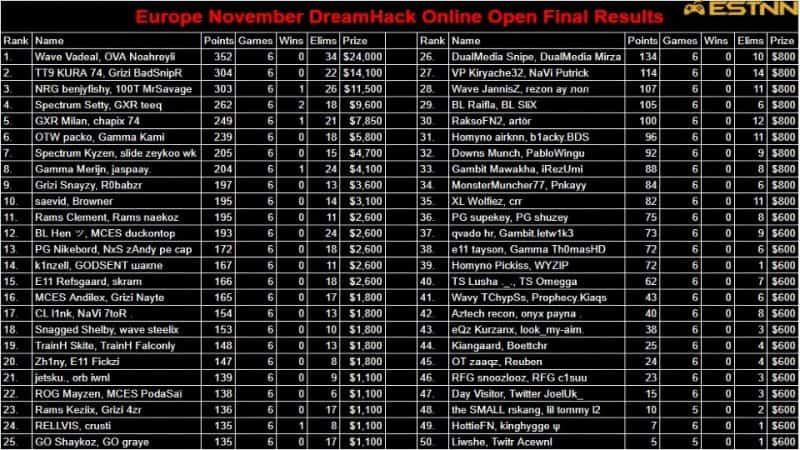 The team of TT9 KURA and Grizi BadSnipR made a run at first place late in the competition. The pair closed out their final four matches with a 9th, 6th, 3rd and 4th to edge out fan favorites NRG benjyfishy and 100T MrSavage only one point. BadSnipR and KURA collected $14.1K USD for their second-place result. The former Fortnite World Cup Finalists, Benjy and Savage, had somewhat of an inconsistent day until the final match, where they completed a 12-elimination Victory Royale.

DreamHack Duos will continue in four days with the NA East region. We can expect the same level of hype and even more drama. Stay tuned to ESTNN for more Fortnite news and updates!