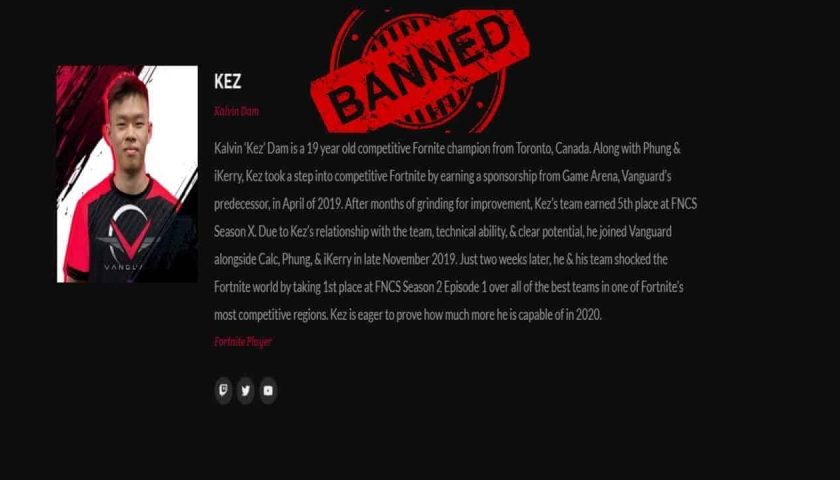 Former Fortnite Champion Series (FNCS) winner and alleged hacker KEZ reappeared on Twitter early this morning, claiming he never cheated and was wrongfully banned from the popular Battle Royale. The controversial situation unfolded several weeks back during Fortnite’s “Frosty Frenzy” tournament where Chapter 2 – Season 1 Champion received an abrupt ban while in-game. KEZ proceeded to deactivate his Twitter account and went completely silent. Meanwhile, a seemingly reputable source provided “proof” that he purchased an illegal third-party cheat several months prior. That supposed source vanished from Twitter altogether. Now, KEZ is back and angrier than ever at what transpired.

Three weeks after Epic Games struck the FNCS winner with the ban hammer, KEZ returned with a vengeance. He took to Twitter after reactivating his account. “What happened to that guy I supposedly ‘bought’ off of? Why’d he delete the tweet then deactivate?” Asked KEZ. “He made a fake business email in my username (I have never made a business email) and paid himself on Paypal or inspect element.”

After doing some backtracking, ESTNN learned that KEZ was at least accurate in questioning where the initial cheat seller went after “exposing” the former Fortnite champion only a few weeks ago. The account once known as @TankedGG changed names to @FyzaFN, and now neither account is active. KEZ continued his brief tirade, stating, “Also he realized if he kept pretending like he is a real cheat seller he was going to get a rude awakening from Epic Games lawyers, changed to a random Fortnite name, and called himself a detective instead.”

Also Read: IO Guards Have no Place in Competitive Fortnite

While it’s safe to say KEZ has at least some merit to his claims, several clips emerged during the fiasco; calling into question whether he was indeed cheating. A competitive Fortnite player and streamer named “Bugzvii” responded to one of KEZ’s first tweets since reappearing on Twitter, asking, “So you [sic] wanna talk about it now?” Along with that question, the Fortnite player included a clip of KEZ downing him during an Arena match and boasting about it in his stream chat. KEZ responded to Bugzvii with a clip from professional Fortnite player Jahq, stating, “so like people can do this but im not allowed to hit 5 bloom body shots from an easy arc trajectory shockwave bouncer player from like 90 meters away lol.”

Although he was not exposing Jahq, KEZ merely used that video to explain how Fortnite’s bloom aiming system works in mysterious ways. Regardless, there are still some missing pieces to this story. KEZ has not elaborated on why he deactivated Twitter and took three weeks to respond to the controversy. It’s been a strange month for KEZ, who could very well clear his name as this bizarre situation continues to unfold.

Epic Games has quite a track record when it comes to issuing punishment to its player base. The game’s anti-cheat typically does all of the work, and Epic seldom provides any context. Fortnite World Cup Champion Bugha received an in-game warning for “collusion” during a tournament last year without any clarity.

It doesn’t seem very likely that Epic would review KEZ’s case and unban him or that the former FNCS winner even wants that. ESTNN has reached out to KEZ for comment, but he has not responded.

Stay tuned to ESTNN for more on this developing story.