A second gold Uncommon legendary creature from the upcoming Theros: Beyond Death set was revealed today.

Set to release digitally on Jan. 16, Theros: Beyond Death (THB) continues to spice up Magic: The Gathering. Siona, Captain of the Pyleas was the first gold Uncommon legendary creature spoiled over the weekend, and now, Eutropia the Twice-Favored dropped with the mechanic Constellation. 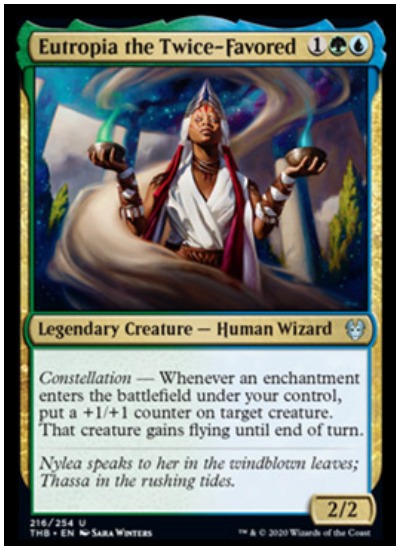 Eutropia has a CMC of three, one Green and one Blue. The card is a 2/2 that puts a +1/+1 counter on a creature when an Enchantment enters the battlefield under that player’s control. Without any other added benefits, these stats make Eutropia a solid pick in Limited Draft with potential for a fun build in Commander.

But as the icing on the cake, Eutropia also provides the target creature who received the +1/+1 counter flying until the end of turn. This ability alone will end matches in Limited and opens the door for experimentation in Standard Constructed.