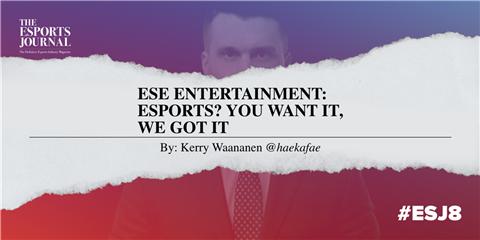 RELATED: Three (types of) companies that might unshackle monetisation in esports

There’s slow dynamite in how Konrad Wasiela speaks about the esports industry, and gaming as the cultural zeitgeist. The Founder and Director of ESE Entertainment is all about positive turnovers — always has been. A former professional Canadian-football cornerback, Wasiela has an eye for how moving targets line up. Since founding ESE, he’s been aiming to convert non-gamers to gamers, fans to fanatics, and doubters to believers.

His company is publicly listed (TSXV: ESE), and ultimately, converting moving targets to hockey sticks on growth charts makes the company happy. Wasiela and ESE are determined to be the next €1 billion company, and they’re going to do it with products and services at every level on the way to the top: a skyscraper of offerings.

Wasiela saw behind the curtain over a decade ago, at a localisation company — essentially ‘translating’ the look and feel of products and services to match different cultures — working for some of the world’s largest gaming companies. Thrown into the deep-end of game development, Wasiela observed: ”Holy smokes, this is fascinating. And then I started to realise how big of an industry this was.

“The entire time I was building that company, I was going to countless conferences and events,” Wasiela told The Esports Journal. “I was constantly learning from industry experts and trying to figure out if there was an opportunity for me to start something big on my own. I was in Poland on a due diligence trip looking into gaming and esports assets and I attended the IEM Katowice World Championships for CS:GO.

“The second I walked up toward the stadium and saw all the gaming enthusiasts, it was just the lightbulb moment. I literally didn’t sleep for a week. And I was like, ‘I’ve got it, I know exactly what I need to do’.”

Ol’ Katowice got another one. With over 150,000 people through the doors and Intel’s $100 million ten-year sponsorship of the event, Wasiela’s dynamite caught its spark.

Then the targets started to line up for Wasiela: Amazon’s purchase of Twitch for $900 million made perfect sense. The Canadian assembled a veteran team with a combined 50 years of experience in gaming and esports to consider the industry’s great conundrum: ‘Why aren’t many people making money in esports?’

“We started looking at the infrastructure,” Wasiela said, “and looked at the advantages of providing services out of Eastern Europe at a reduced cost to the rest of the world. From there, we formed a business plan and officially launched ESE Entertainment.”

The blueprint was becoming reality — everything Wasiela and the team had planned hinged on making sure money moved seamlessly. “How do you scale,” he said, “if you don’t have a partner who can provide payment solutions, for example, in Poland, and the next day you want it in the Philippines? That’s a major problem. You can’t scale.”

At the end of 2020, the company signed a deal with global payment technology company Nuvei to support ESE’s future ecommerce undertakings, process global payments, and sponsor the company’s next move. “With Nuvei, we have global reach in payments solutions verified. We know that they’re the real deal.” Second floor: payments and ecommerce.

Founded in 1998, K1CK is one of the oldest orgs in Europe, and the ink has only just dried from ESE’s completed acquisition earlier this year. “I valued their experience,” Wasiela said. “They have over 500 tournament wins on a global scale. I valued Pedro [‘Spirit’ Fernandes], the Founder, and his knowledge base. He is a legend in esports and has dedicated his life to K1CK. It was a perfect fit for ESE and the right way to enter the esports community with a trusted brand like K1CK.”

To read the rest of this article, go to The Esports Journal Edition 8, page 43