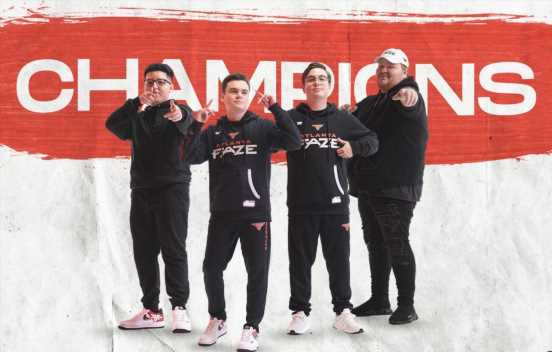 The Atlanta FaZe certainly showed up at the Call of Duty League Stage 1 Major, securing the victory and $200,000 of the prize pool. Atlanta FaZe didn’t lose a series during the entire CDL event, eventually defeating Dallas Empire in the finals to capture the tournament.

It was a cakewalk for FaZe, who came into the event atop the CDL standings. Throughout the weekend, the “Tiny Terrors” squad proved just how much work the rest of the league has to do in order to catch them up.

Coming into the Major, one of the most popular fan choices to win the event was FaZe. They hadn’t lost a map the entire season and looked stellar during Super Week, which obviously translated over to this weekend’s tournament.

In the entire event, Atlanta only played three series. However, perhaps what’s more impressive is that they only lost two out of 13 maps, both coming at the hands of Dallas Empire in the grand finals.

Dallas Empire are number two in the standings, but it seems they have a long way to go to match Atlanta FaZe, just like the rest of the CDL. In both the winners and grand finals, Dallas seemed completely clueless as to what FaZe was doing, as Ian “Crimsix” Porter pointed out following the event.

The MVP for FaZe is somewhat difficult to decide, as both Tyler “aBeZy” Pharris and Chris “Simp” Lehr performed tremendously. However, the nod might have to go to Simp for his plays in the grand finals. This was echoed by the league, who awarded Simp the “Player of the Stage.”

While Simp goes home with the accolade, the entire FaZe roster played lights out the whole weekend. As long as they keep performing at this level, it’s difficult to foresee another squad taking their spot atop the standings, in the near future at least.

The Call of Duty League picks back up on March 18, for the Toronto Ultra Home Series and the beginning of Stage 2.