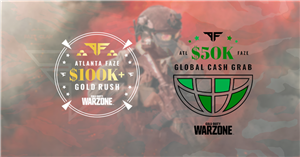 According to the release, both events will be streamed live on Call of Duty and FaZe Clan’s Twitch channels, as well as Atlanta FaZe’s YouTube channel.

During Atlanta FaZe’s Gold Rush tournament, duo teams will compete for over $100,000 (~£71,845) in the form of custom one-kilogram gold bars, presented in an acrylic display case.

The event is said to feature a multitude of streamers such as Dr Disrespect, SypherPK, and Tommey, among others. Additionally, the Atlanta FaZe $100k Gold Rush will see some of the organisation’s own content creators compete. This includes Nickmercs, Swagg, Blaze, and Pamaj, to name a few.

RELATED: FaZe partners with Kappa and 433 to create physical versions of FIFA 21 kit

Immediately following the first event, Atlanta FaZe and FaZe Clan will kick off its Global Cash Grab tournament. The competition will feature international streamers, such as SkyrrozTV, FaZe Testy, and Recrent, who will compete for a $50,000 (~£43,038) cash prize.

In 2020, FaZe Clan hosted its first-ever Call of Duty: Warzone tournament with #Fight2Fund, which raised almost $125,000 (~£89,781) for those affected by COVID-19. The esports organisation has since partnered with Call of Duty for Twitch Rivals: FaZe Face-Off and the Atlanta FaZe Cold War Clash.

Esports Insider says: Events that have the backing of a well-known organisation, include a prize pool totalling over $150,000 (£107,738), and feature well-known streamers, should hopefully attract a lot of viewers. The events also highlight how much of an influence FaZe continues to have in the Call of Duty scene.