As promised during the last character reveal trailer, Arc System Works gave us a present to start off the new year. Today we got our first look at the 14th addition to the upcoming Guilty Gear Strive, Anji Mito. The last time we saw a playable version of the fan wielding heartthrob was way back in Guilty Gear XX, which released all the way back in 2002. Anji also had a small part in Guilty Gear Xrd REV 2 in Baiken’s story mode. Anji and Baiken are the only two characters of Japanese descent in the game’s main cast, so the two are very connected, story-wise.

Without getting into the ridiculously convoluted lore of the Guilty Gear franchise though, let’s take a look and see what Anji has to offer in Guilty Gear Strive. Right away we can see that Anji looks much older now and sports a much more flowing and regal blue kimono than his previous incarnations had.

We can see Anji’s trademark fans in action as he juggles Giovanna with a couple standing jabs after landing a low hitting sweep that seems to cause a pop up on counter-hit. We then see him knock Sol out of the startup of one of his moves causing a knockback into a wall-bounce. Anji keeps the combo going with what might be a sort of jump cancel as he hops forward slightly and low to the ground to catch up with Sol. 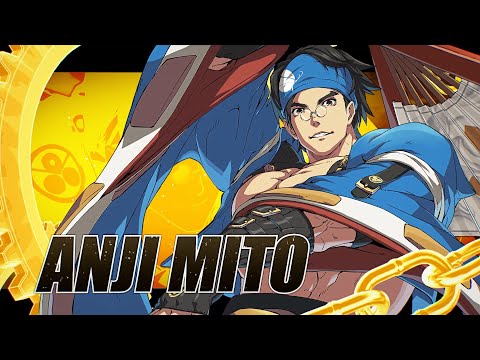 Putting the “fan” in fanboy

We then see what is most likely Anji’s taunt, giving a polite and respectful bow to Millia. Anji then performs an anti air on Zato, knocking him out of the sky, and following it up with a twirl into an upward moving strike and tacking on a few more hits on the way down. Although much isn’t shown in the trailer, it is clear that Anji has huge combo potential, utilizing the long reach of his fans and mobility to extend combos. Then we have what is most likely his win pose as he covers himself with his fans and disappears into a mist of blue butterflies.

Then we get to see one of the more interesting moves in the trailer. Axl attempts to strike at Anji but Anji lands a counter move that brings him towards Axl while he is still in recovery and lands a throw. After the throw Anji launches one of his trademark slow moving butterfly projectiles. It is unclear right now if the throw is a direct follow up to the counter, or if there are several variations of it.

Either way this is a great tool for Anji to control space and create great mixup opportunities on wakeup. Lastly we see this counter move used again against Leo which goes directly into his super. Which leads me to believe that the counter lets the player use whatever follow up they choose after the counter animation.

Finally we get a reminder at the end of the trailer that Guilty Gear Strive will launch with 15 characters, and that the final launch character will be revealed in February. Considering how closely the two are linked, I am personally hoping that the final character will be Baiken. Guilty Gear Strive releases on April 9, 2021 for PS4, PS5, and Steam. The game is currently available to pre-order now for PS4 on the PlayStation Store, but not for PS5 or Steam just yet. The pre-order process is a little confusing, but you can check out all the info here from the official site.