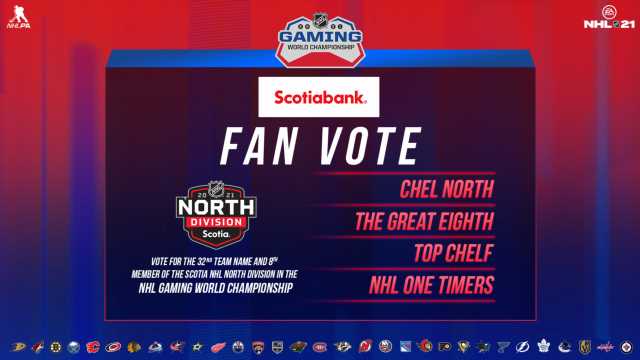 The 2021 NHL Gaming World Championship has opened the Scotiabank Fan Vote, which allows fans to cast their ballots for the 32nd NHL team that will play in the tournament. The team with the most votes will also become a member of the Scotia NHL North Division.

How to cast your vote

Fans of  NHL esports can vote for one of four teams: Chel North, The Great Eighth, NHL One Timers and Top Chelf. Votes can be cast between April 14 and 18 over on the official NHL Twitter account.

The 32nd team in the 2021 NHL Gaming World Championship needs a name! #NHLGWC

Cast your ballot in the @scotiahockey Fan Vote to name the eighth member of the @scotiabank NHL North Division team!

The NHL team with the most votes will be announced on April 20 during a Twitch livestream. The NHL will also publish the winning team on its other social media platforms.

Engaging with the NHL esports community

“Scotiabank is committed to opening up the game of hockey so that future generations of players and gamers from diverse backgrounds see themselves in the sport,” Mike Tasevski, the vice president of global sponsorship at Scotiabank, said.

Tasevski added that the bank is excited to be a part of the unique opportunity. The Scotiabank Fan Vote allows the financial institution to engage with the hockey gaming community. It also lets the bank introduce the game to new fans.

The 2021 NHL Gaming World Championship and Scotiabank Fan Vote are not the financial institution’s first foray into NHL esports. Scotiabank has been a partner of the tournament since its debut back in 2018.

Last year, the bank sponsored the Learn to Chel series, which involved videos featuring NHL gaming personalities. In a series of episodes, those who were new to the EA Sports’ NHL game were given advice on how to improve their gameplay.

Players who wish to test their skills against others can still register and compete in the 2021 NHL Gaming World Championship. A share of the $100,000 prize pool is at stake.

Players can either join the 32nd team after it gets announced or one of the other 31 available NHL teams.